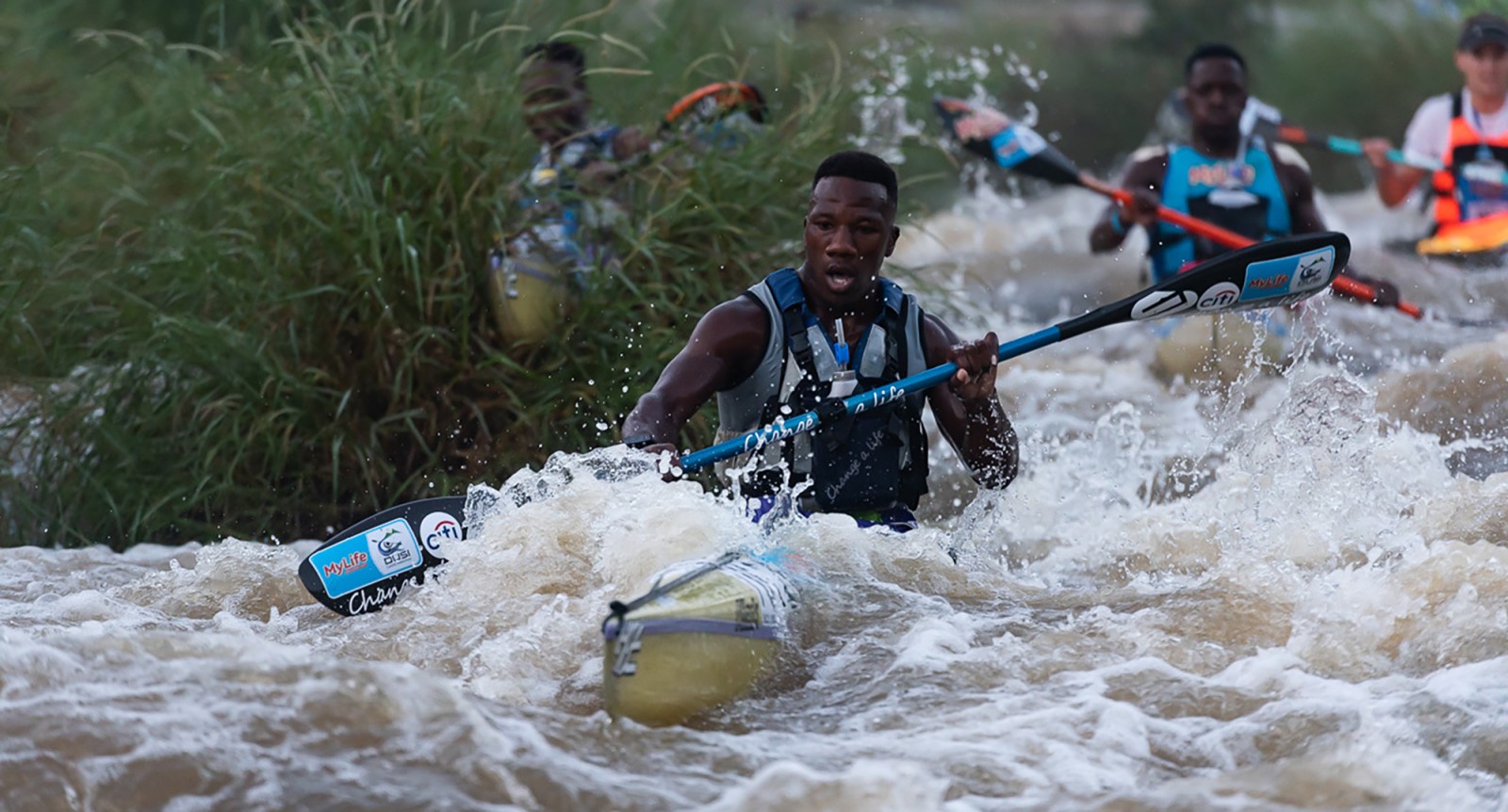 A competitor braves the rapids during the 2021 Dusi Canoe Marathon which is held over three days between Pietermaritzburg and Durban, South Africa. (Photo: Anthony Grote)

Nearly 800 paddlers in the annual Dusi Canoe Marathon between Pietermaritzburg and Durban, set off early on Thursday, seemingly undeterred by high levels of sewage bacteria that increasingly permeate rivers nationwide.

On the third and final day of the Dusi Canoe Marathon, as they approach the finish line at Durban’s Poo Lagoon… er, Blue Lagoon… paddlers will pass close to the giant sewage works at the centre of the recent E.coli bacteria tide that led to the closure of several city beaches over the January holidays.

The eThekwini municipality has done its best to deflect public attention from its own failures to properly manage and maintain the Northern Waste Water Treatment Works that can treat up to 70 megalitres a day. Instead, it has sought to blame the problems on heavy rains, electricity thieves, floating clumps of water hyacinth weeds or dark clouds of industrial inks washing downstream.

But local river watchdog groups such as Adopt-a-River did not buy these stories and resorted to collecting their own water samples from the Umgeni River for independent laboratory analysis.

The national Department of Water and Sanitation was also very dubious and has now served a legal notice on the city — warning senior officials that they face criminal penalties that include five years in jail if they fail to come up with an action plan or to remedy the root cause of the pollution from the Northern works.

In a formal directive sent to the city on 26 January, provincial water department head Ashley Starkey cautioned that the directive would remain in force until the municipality addressed and complied with all the concerns of his department.

In terms of an exemption permit issued to the city, the Northern works is allowed to release treated wastewater into the Umgeni River, as long as this water does not contain more than 1,000 cfu/100 ml of E.coli sewage bacteria.

Though recreational safety guidelines vary across the world, E.coli levels above 500 cfu raise red flags in several nations due to the increased risk of gastrointestinal illness among swimmers and water sport enthusiasts.

In response to this letter, eThekwini Water and Sanitation head, Ednick Msweli, said the Northern works had received sewage flows above plant capacity due to heavy rainfall in late December.

As a result, a large volume of this flow was diverted into the plant’s maturation ponds to prevent flooding the primary and secondary treatment plants. The maturation ponds were then flooded and contaminated water ended up in the Umgeni, which flows into the sea at Blue Lagoon.

According to the city’s action plan, some of the sediments from these ponds are now being removed by tankers to other works, and the city was also preparing to advertise a R5-million emergency tender to de-sludge the maturation ponds.

In simple terms, these shallow ponds form the last phase of the water “polishing process” after primary and secondary treatment, but they now seem to be overgrown with aquatic weeds and are full of muck.

It is not clear when these ponds were last de-sludged, but it is evident from recent aerial photographs that many have been full of algae and sediment for several months, predating the heavy rains in December.

Starkey also noted that when government officials visited the plant on 11 January, they found that sludge management in the initial treatment phases “had not been operational for a while”.

“Septic sludge build-up and the malfunction of critical units was evident within the plant, including the maturation ponds.”

In other words, there were several problems at several phases of the water treatment process.

Our Burning Planet also obtained a copy of eThekwini’s compliance report to the Department of Water Affairs, which shows a zero percent compliance rate for microbiological guidelines during October 2021.

Making use of the Promotion of Access to Information Act, we also obtained the results of recent Umgeni River water samples from eThekwini which show that E.coli levels were above 241,000 cfu next to the Northern works on 7 January, and still exceeded 104,000 cfu at the Blue Lagoon river mouth as recently as 15 January.

Separate tests collected by Adopt-a-River and analysed by the Talbot group’s laboratories showed even higher readings at the point where “treated” water from the Northern treatment works enters the Umgeni.

These tests showed E.coli readings of almost a million cfu just below the Northern works and more than 68,000 cfu at the Kingfisher Canoe Club on 3 February — way in excess of the permit requirement of 1,000 cfu (or the stricter 100-500 cfu guidelines used by several countries as a safe guideline for swimming and recreation).

“The E.coli levels in the river are an issue, but largely restricted to the urban areas of Pietermaritzburg and Durban. E.coli pollution has been a factor in the Dusi since the 1980s, and the notorious ‘Dusi Guts’ is a nasty consequence for some unlucky paddlers.

“We have been working very closely with the Msunduzi municipality in recent years and we have enjoyed their buy-in and the strong support of the mayor personally,” said Le Breton.

“In the past month there have been numerous infrastructure issues that have been addressed, with broken or missing pipes replaced and sewer leaks repaired, which has helped a lot.

“We have reached out to the eThekwini municipality on numerous occasions, hoping to set up systems similar to ones used successfully in Pietermaritzburg to quickly identify problems and remedy them,” said Le Breton, without remarking on whether these approaches to eThekwini had borne fruit.

Organisers had always adopted an “open book” policy on the E.coli levels in the river, and the results of weekly tests done by the City of Pietermaritzburg and the Duzi uMngeni Conservation Trust are published on the race website to enable paddlers to make informed decisions.

“The paddlers are fully aware of the reality of the impact of rains on the water levels and quality, and they plan accordingly,” he said.

Be that as it may, concerned citizen groups are hoping to put more pressure on the national Department of Water Affairs to intervene to resolve river pollution problems nationwide.

Janet Simpkins, founder of the Durban-based Adopt-a-River group, says the focus cannot be only on the Dusi canoe race or one river alone.

“These issues are happening countrywide. Our focus is now on national intervention.

“We are beyond the point of municipalities being able to fix what needs fixing. The cost to overhaul the infrastructure can only come from higher up. So we continue to raise the alarm and stay connected at ground level in the hope that the growing voices and pressure builds to a point where it creates a change. Something has to.” DM/OBP