Never coming back: Covid-19 ripped through the Eastern...

DEATH AND DYING IN THE EASTERN CAPE: PART TWO

Never coming back: Covid-19 ripped through the Eastern Cape, leaving a trail of broken hearts in its wake 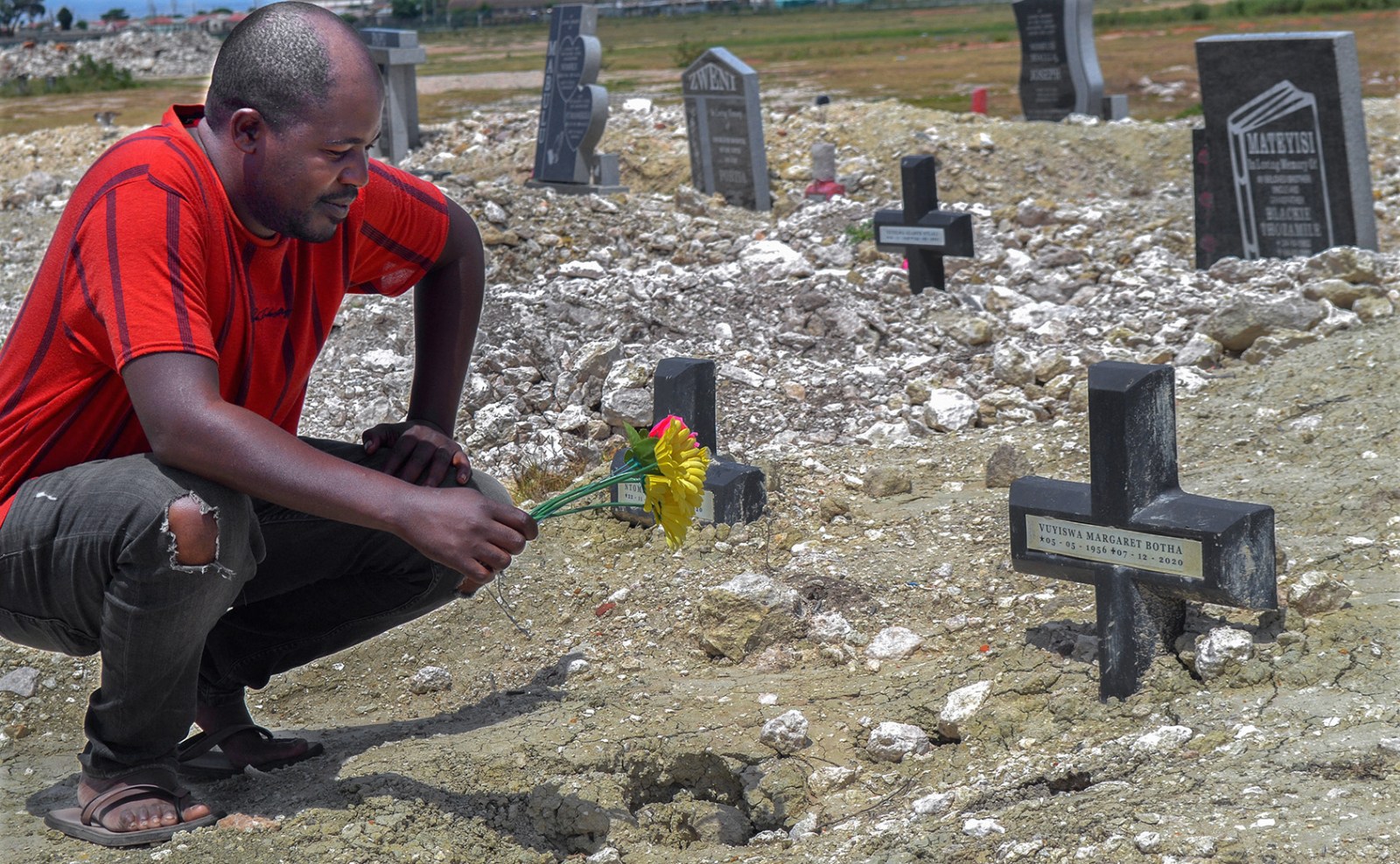 It is an indescribable horror and sadness that nobody should experience. Families in mourning, many left to deal with the trauma of loved ones who will never be coming back, with their last memory being that of leaving them at the hospital with no chance to say goodbye or even partake in the ritual of a funeral.

‘All I wished for was an opportunity to tell her to rest in perfect peace, and I did that, but there was no response. I still feel the need to talk to someone as I struggle to openly express emotions to my children. I don’t want them to feel pity for me and I struggle to keep strong every day.”

These are the words of Linda Nika (56), an HIV/Aids ambassador living in Ezibeleni township in Komani (Queenstown). In July 2020, Nika lost her aunt who had raised her from the age of two. In her street alone, there are six families who lost someone to Covid-19.

Nika said the community and government stigmatised Covid-19 to such an extent that it became difficult for families to access some healthcare services in local clinics.

There were times when several people in one family died on the same day.

“The most painful ordeal was not being able to support one another due to Covid-19 funeral restrictions,” Nika said. She was unable to bury her aunt due to her own health concerns.

Nika still cannot explain the anxiety she felt when she looked at the photos taken at the funeral.

“The distance between family members and the grave was too much to bear. Family would traditionally be offered an opportunity to say their goodbyes by laying stones on the grave,” she said. This was never done for her aunt.

To deal with her stress and state of mind, she would call her pastor for spiritual counselling. They would pray together so she could grow strong enough to be there for her children.

“The death of our people from Covid-19 has left serious scars which may never heal,” said Nomangesi Mafanya (45), also from Komani.

She lost her sister, Veliswa, during the first wave of the pandemic. Veliswa had missed a family gathering after feeling ill in the last week of May 2020.

Veliswa was admitted to hospital and her family, from Cofimvaba, never saw her alive again. Unaware of her condition, they sent repeated messages and grew increasingly worried when they never heard back. On her eighth day in hospital, staff managed to resuscitate her and she got in touch with the family. She died three days later.

“The doctor told us she had to be buried within seven days and the funeral must only be an hour long. There could only be 50 people there,” Nomangesi said.

“She was buried by the young people in her family because there were fears for the elderly people’s lives.

“This ordeal is difficult for me, as an adult, to deal with. How much more difficult must it be for her children?”

Ndileka Ngqaza (47) lost her brother Lucas in 2021 at Indwe Hospital due to complications caused by Covid-19. He was in his mid-60s.

The family was not allowed to visit Lucas from the day he was admitted. On the day he died, the hospital called his oldest daughter and informed her of his death.

Ngqaza was a senior church leader, a respected preacher who was not afforded an opportunity to be laid to rest as Ndileka and other family members did not have enough time to prepare for his final send-off.

In the Eastern Cape town of Mthatha, some households are now run by children as all the adults have died of Covid. Some families lost up to six members.

“Covid has caused big wounds to me. It’s not easy to talk about this… this has caused a hole in our hearts… this has robbed us of the breadwinner, someone who was responsible for almost everything in this family.”

Phoswa’s daughter died in East London and was buried in Elliotdale.

“My daughter promised to build me a house, but now all those promises are gone,” Phoswa said.

“I can’t even sleep when I’m thinking about this. It will take years to heal,” she said.

Another Mthatha family, who asked not to be identified, said they had lost five family members to Covid.

In Nelson Mandela Bay, Andile Botha lost his mother, Vuyisa, to complications due to Covid.

“She was diabetic and she started feeling sick. I called an ambulance, but it never arrived. However, when I was on my way to look for a private car to transport her to hospital, I saw a passing ambulance and stopped it. They took her to Motherwell Community Health Centre.

“She was stabilised and referred to Empilweni (TB) Hospital, where she tested negative for Covid. I was not allowed to see her, but I called every day and she was doing fine. Before she was discharged, the doctor told me that her diabetes was under control, but that she had low blood pressure and would be sent to Dora Nginza Hospital.

“After two days, while I was at home, I got a call telling me that I must rush to Dora Nginza Hospital. When I got there, I was told my mother had passed away due to Covid.

“I’m saying unapologetically that the department of health failed us because when my mum left Empilweni Hospital, she was Covid-negative. Dora Nginza Hospital infected her with Covid as I believe there was no infection and disease controls in place at the peak of the second wave in December 2020,” added Botha.

Nomathamsanqa Makhosi from Motherwell in Nelson Mandela Bay looked after her late brother, Govuza, who lived with mental illness.

“A couple of months before the pandemic hit, we were turned away numerous times at Dora Nginza Hospital. He was a long-time patient at Tower Hospital and whenever he fell ill we used to take him to Dora Nginza for observation,” Makhosi said.

“One evening, our neighbour called to say he saw Govuza at Livingstone Hospital emergency room (casualty).

“The next day we rushed to Livingstone Hospital, but they were no longer allowing visitors. A security guard confirmed to us that Govuza was admitted to the ICU and was not able to talk. He spent three days in the hospital, from emergency areas to ICU, and he never came home — he died alone. We didn’t even have a chance to say goodbye.

“We never got to see him, we were only talking to security guards… not even a single nurse or doctor came and explained his condition to us. We only got a call from the hospital that he died of respiratory problems linked to Covid-19. Other than that, we don’t have any information,” she said.

Zolelwa Wakeni from Mdantsane in East London still struggles to come to terms with her mother’s death. All she remembers is the last hug she gave her mom before she was admitted to Cecilia Makiwane Hospital.

“She was my best friend… she was always present for whenever we needed her. I could not believe it when we were told by the hospital in January 2021 that she passed away. She used to follow all the Covid-19 recommendations. She was even afraid to go shopping.

“She woke up complaining of a headache. We rushed her to Nontyatyambo Community Health Clinic, and later she was taken to Cecilia Makiwane Hospital and admitted. She developed breathing problems while waiting to go to the hospital. We were hoping that she would get the help she required. Instead, she told us over the phone that she was not given anything other than oxygen.

“According to her, she was also waiting for the lab results to determine her illness. She passed away without ever receiving her results. The healthcare workers only informed us that she was infected with Covid.

“Even today, we feel as if the hospital staff left her to die without giving her any treatment other than oxygen as they knew no one will be held accountable, since every death was regarded as a Covid death,” Wakeni said. DM/MC