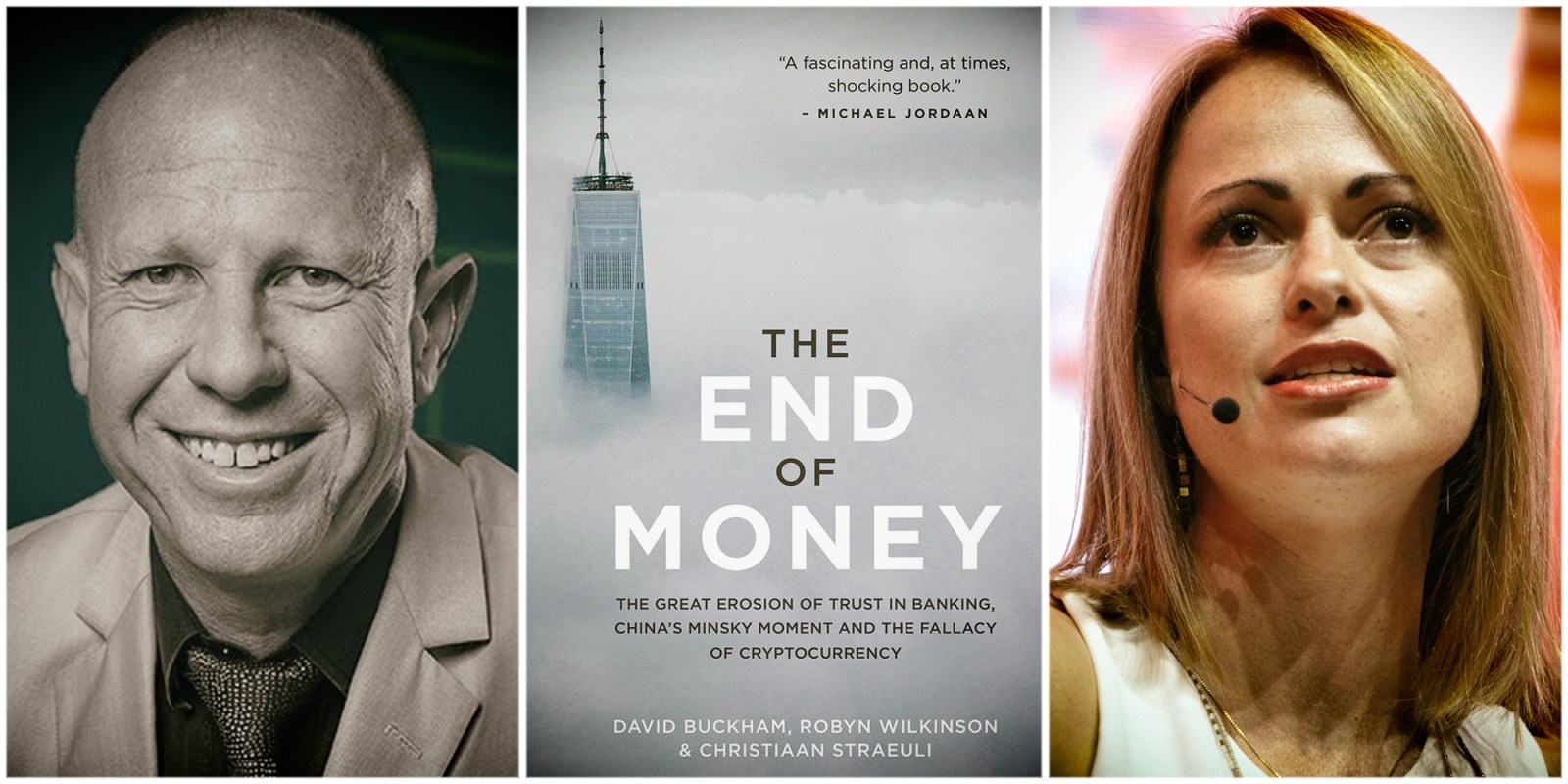 Today, the top four banks in the world are Chinese, which is in contrast to 10 years ago when the top 10 were French, British and American.

Scorpio investigative journalist Pauli van Wyk and Buckham were discussing the book Buckham co-authored with Robyn Wilkinson and Christiaan Straeuli, The End of Money: The Great Erosion Of Trust In Banking, China’s Minsky Moment And The Fallacy Of Cryptocurrency,

In this deeply researched review of modern banking and financial systems, the authors unpack why there is an ongoing erosion of trust in capitalist free markets and Western democratic institutions and the directly related unprecedented growth of the Chinese banking system.

Why we lost our trust in the capitalist free market

Buckham thinks back to 1989, the year he matriculated and the year the Berlin Wall came down: “It was the logical end of the ideological battle between communism and the free market.”

Like everyone else, Buckham thought this marked the period where this type of ideological conflict would end. However, that was not to be the case.

Buckham cites The Economist Intelligence Unit’s latest research on democracy, which paints a grim picture. “We have less democracy in the world than we did last year, which was worse than the year before.

Buckham thinks this and “bad actors” like Lehman Brothers are to blame for our erosion of trust in the financial system. The bankruptcy of Lehman Brothers in September 2008 was the climax of the subprime mortgage crisis and contributed to the global financial crisis of 2008.

“I think we misunderstand how severe that crisis was,” said Buckham, explaining that, because South Africa’s regulator wisely did not allow credit default swaps, this country was not exposed to the type of multiplication of risk that the US experienced.

“So, by the time you get to 2015, 2016, people like you and me don’t trust banks. I mean, I do because I work with banks,” said Buckham, “but institutional trust, trust in government has declined. And with that has come our turn to authoritarianism.”

Van Wyk brings up Buckham’s point in the book that highlights how China’s state-owned banks are growing at a disproportionate rate compared to the country’s economy.

“Whereas China, even if you don’t take all the banks, just the top four, and you add their balance sheets up, divided by Chinese GDP which is $14-trillion —  a third of US GDP — you get 3.5.”

Buckham thinks the reason the Chinese have got here is due to their aspirations to overcome a century of humiliation and how they capitalise on their interest.

“They have targets for different states or provinces and they have targets for their banks; the banks must lend whether it’s commercially viable or not. And when the banks need to be paid, we think that they inadvertently or advertently renew the loans. We think they basically take the outstanding loan, which the individuals or the companies haven’t paid back — they haven’t even paid the interest back — and they capitalise the interest.

That’s the reason Buckham thinks they have grown so big and so fast over the last decade, and he thinks it is not sustainable.

Van Wyk said if there is something they both can definitely agree on it is, where there are people, there’s drama.

Buckham says a solution for this is for rapid-fire and proper antitrust laws to be implemented.

Using the examples of monopolies, like Google in terms of search engines, or Facebook in terms of social platforms, Buckham believes that if there were proper antitrust laws implemented in the Western world, and anti-competition rules which put people in prison quickly, we wouldn’t have had as many monopolies and as much greed. DM

Order your copy of David Buckham’s The End of Money from the Daily Maverick Shop and receive free delivery anywhere in South Africa.