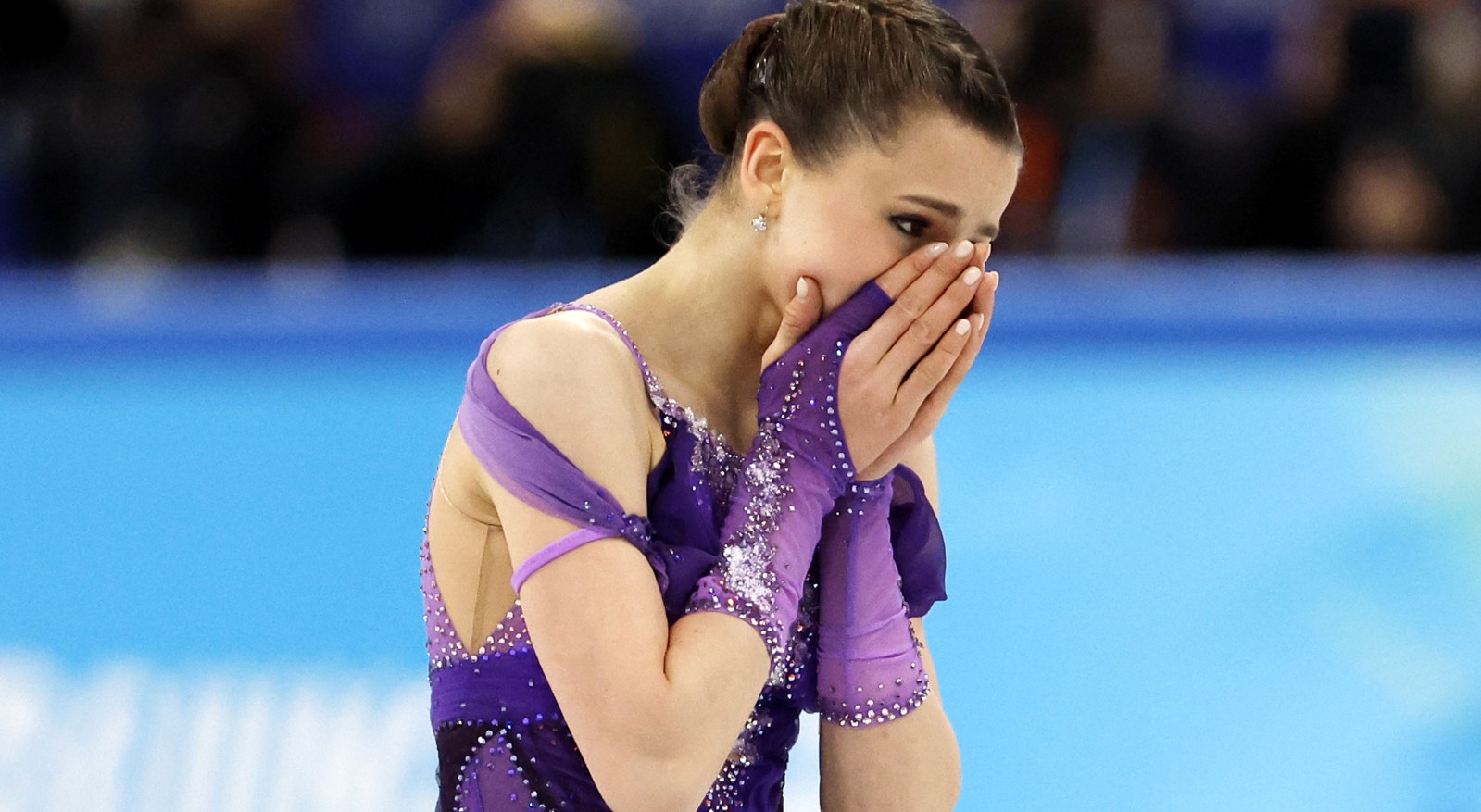 Kamila Valieva of Russia reacts after her performance in the figure skating team event at the Beijing Olympic Games on 6 February 2022. (Photo: EPA-EFE/How Hwee Young)

The 15-year-old’s gold medal and Games future now hangs in the balance as the International Olympic Committee (IOC) attempts to draw a line in the sand over Russian doping.

Russian athletes are competing at the Beijing Games without their flag and national anthem because of sanctions against Russia for previous violations. Russia has acknowledged some shortcomings in its implementation of anti-doping rules, but denies running a state-sponsored doping programme.

Valieva delivered one of the highlights of the Beijing Games so far when she landed the first quadruple jumps by a woman in Olympic competition on Monday.

Her Olympic dream, however, turned into a nightmare on Friday when the ITA revealed publicly that she had tested positive for banned angina drug trimetazidine in a urine sample collected by Russian authorities at the national championships in St Petersburg on 25 December.

“It is a shame, and the responsible adults should be banned from the sport forever!!!” German figure-skating great Katarina Witt posted on Facebook. “What they knowingly did to her, if true, cannot be surpassed in inhumanity and makes my athlete’s heart cry infinitely.”

The testing lab in Stockholm, Sweden reported on Tuesday that her sample was positive, the day after she wowed the world with her unique quadruple jumps and helped win the gold for her team, who are competing as the Russian Olympic Committee (ROC).

It was not immediately clear why there was such a delay between her test and the result, which allowed her to travel to Beijing and take part in the first of her two events.

The IOC said the handling of this case was initially with the Russian testing authorities and then with the lab accredited by the World Anti-Doping Agency (Wada).

Wada declined to comment on Friday. The Russian Anti-Doping Agency (Rusada) did not immediately respond to Reuters inquiries.

The Russian Olympic Committee said it was taking comprehensive measures to protect its athletes and to keep a gold medal won “honestly”.

It said Valieva’s tests were negative before and after 25 December.

Rusada imposed a provisional suspension on Valieva after Tuesday’s test result. She appealed a day later and her ban was lifted. The Russians did not disclose publicly the reason for removing the ban.

Now, the IOC and the International Skating Union (ISU) have said they will ask the Court of Arbitration for Sport to overturn the Russian decision to lift her ban. The court said on Friday it had not yet received the appeal.

“We have a 100% policy against doping,” IOC spokesperson Mark Adams said in a press conference on Friday.

He added that the IOC had demanded that a decision be made before Valieva is due to compete again on Tuesday in the women’s singles. Under the rules of the draw, the ROC cannot replace Valieva in singles competition because she has already competed in the team event.

Valieva, wearing a navy hoodie and black tights under padded shorts, skated in practice on Friday afternoon with teammates Anna Scherbakova and Alexandra Trusova, as well as Russian-born Anastasia Gubanova, who represents Georgia.

For days, a doping cloud has hung over Russian teenager Valieva and the Olympics. The medal ceremony for the team event has been delayed for days, with Team USA and Japan waiting in the wings for their prizes.

“We need to expedite this as quickly as possible for all those concerned,” the IOC’s Adams said earlier.

Wada back in the spotlight

The weeks-long delay for the sample result to be reported is highly unusual given Russian athletes are competing in their third consecutive Olympics as ROC athletes, without their flag or anthem, following state-sponsored doping at the 2014 Sochi Games.

They were also the most-tested team ahead of the Games, with the IOC eager to avoid any doping scandals that tarnished previous Games.

David Howman, the former long-time director-general of Wada, told Reuters the timeline of events in this case made no sense.

“If the sample was taken… before the Games, why didn’t Rusada push the Swedish lab to get the results?” he said.

“The other responsibility is with Wada. They knew what samples would have been taken and needed to be analysed.

“And thirdly, the International Skating Union would have known the samples that would have been collected. All three parties would have had access to the ADAMs (Anti-Doping Administration and Management System)… which tells you where and when samples were collected. Those are the questions that now need answering.”

Wada is no stranger to controversy, having played a key role in the Russian doping scandal, with the agency under fierce criticism for what was seen as a lack of oversight for Rusada and Wada’s failure to keep Russia in check.

“The worst case of system failure in my time as president of Wada or in the entire time of the anti-doping movement is Russia,” then Wada president Craig Reedie said in 2019.

“What it (the scandal) taught us when it erupted was that we were not equipped to deal with such a large-scale programme.”

Wada did eventually sanction Russia in December 2019 and barred the team from flying its flag at major sporting events for four years.

That, however, was halved by the Court of Arbitration for Sport, and the sanctions are set to end on 16 December 2022.

Wada, which had also reinstated Rusada in 2018 after a three-year suspension, refused to comment on the case. Reuters/DM