THE PEOPLE’S STATE OF THE NATION 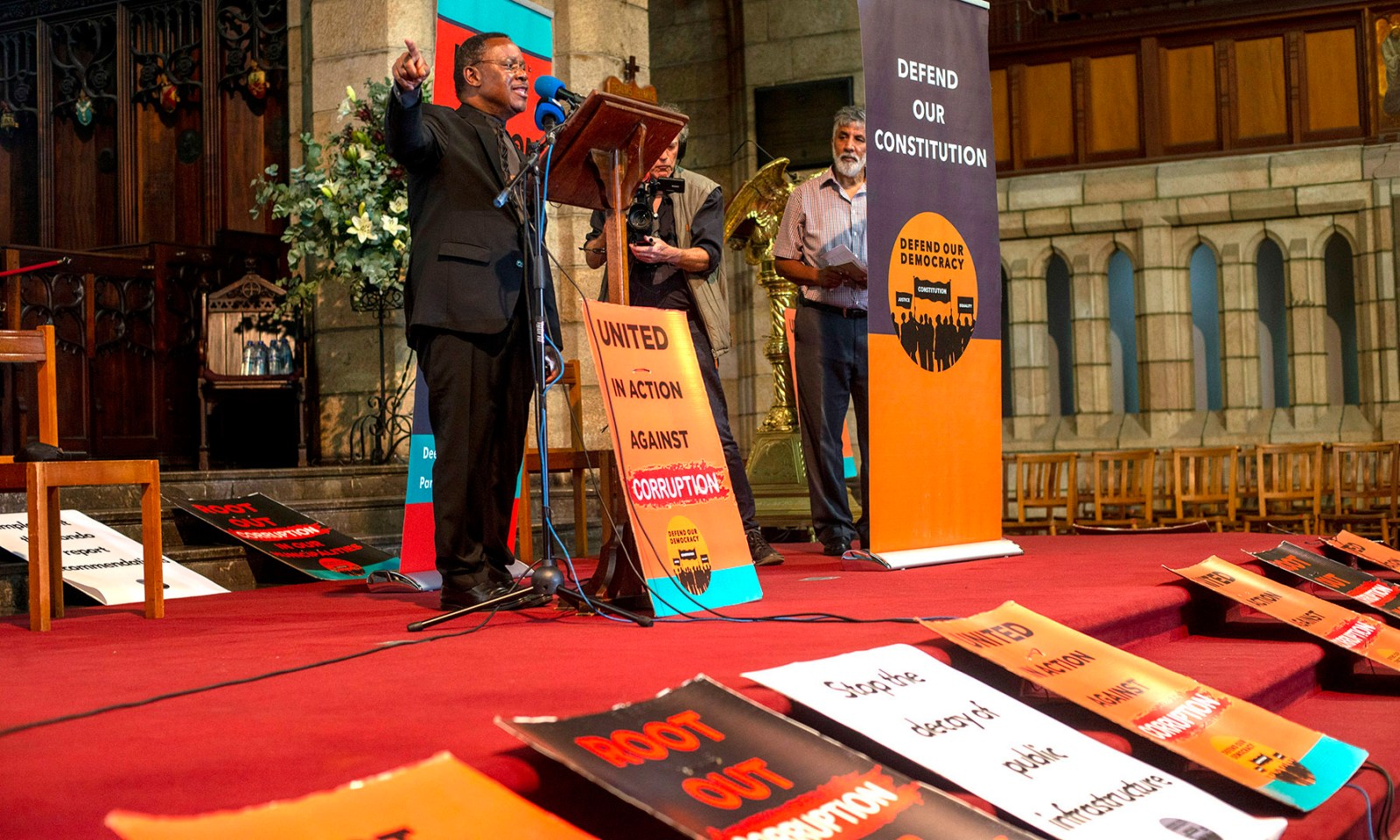 Reverend Frank Chikane delivers a speech at the 'People's State of the Nation' at St George's Cathedral in Cape Town on Wednesday evening, 9 February 2022. (Photo by David Harrison)

On Wednesday evening, Thuli Madonsela gave the keynote speech at Defend Our Democracy’s ‘People’s State of the Nation’.

On the eve of the State of the Nation Address, joining guests for Defend Our Democracy’s “People’s State of the Nation” at St George’s Cathedral in Cape Town via Zoom, Thuli Madonsela said we needed to “roll up our sleeves and do the work for the South Africa we want”.

About 100 people were seated in the church to listen to Madonsela, who holds the chair in social justice and is a law professor at Stellenbosch University.

Referring to the Constitution’s preamble, Madonsela said the Constitution South Africa had adopted was based on “healing the divisions of the past and establishing a society based on democratic values, social justice and fundamental human rights”.

“But Covid-19 and the July unrest made us look at ourselves with new eyes and made us realise that we were not there yet and we are not going in the right direction either,” said Madonsela.

Instead of healing the divisions of the past, we were becoming increasingly polarised, she added.

“The greater challenge is how do we honour the Constitution’s preamble? A promise not fulfilled is similar to a debt that has not been paid. So, who must fulfil this promise?” asked Madonsela.

Madonsela said that the Constitution enjoined all to work towards fulfilling its preamble.

Madonsela said we needed “purpose-driven” plans that were in line with constitutional governance. She hoped President Cyril Ramaphosa would deliver that in his address.

Also present was Reverend Frank Chikane, who said he was angry about the state of the country. “People died, people lost limbs, people were tortured, people suffered greatly, and we didn’t expect for the country to be where it is,” he said.

Referring to the July unrest, Chikane warned: “We’ve said that if the state fails then the people of South Africa will be the last line of defence. The only way to survive is to take a stand. The state of this country is in bad shape and if we don’t take a stand, we’re going to slide to the end.”

The event at St George’s Cathedral comes a few days after a fire in the cathedral’s basement.

On 6 February, Michael Weeder, dean of the cathedral, posted on social media that the fire had been set deliberately:

“The fire was an act of arson. It appears that a lit piece of cotton/gauze was thrown through the small, barred window near the steps leading up to the cathedral’s Wale Street entrance. Someone was spotted running away…”

There had been no “discernable damage”.

On Tuesday, the man arrested for allegedly starting the fire was sent to a district surgeon for psychological evaluation. DM