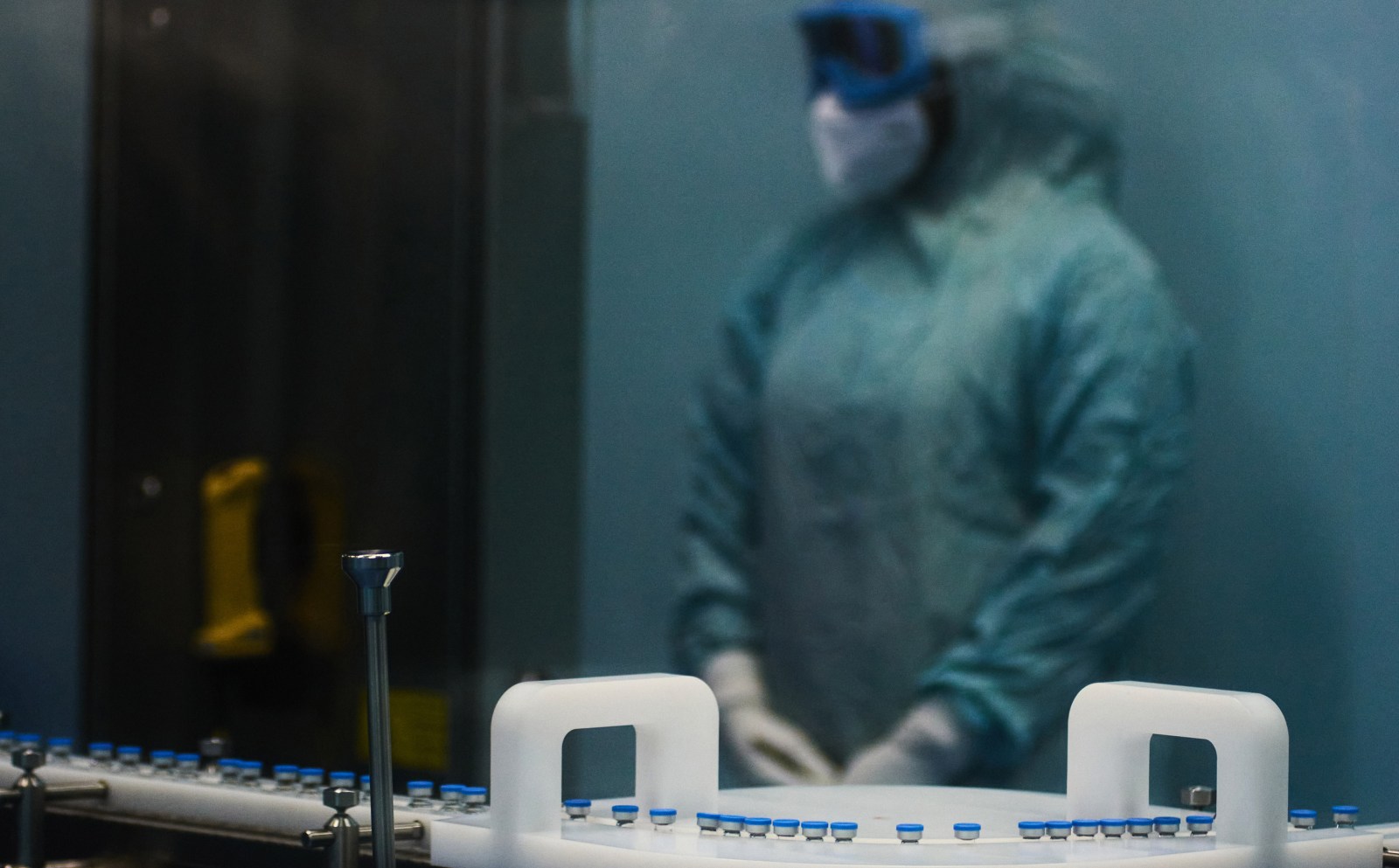 South Africa registered 3,169 new Covid-19 cases, bringing the cumulative total to 3,634,811. A further 2o3 Covid-19-related deaths were reported, 12 of which occurred in the past 24 to 48 hours, taking the official total to 96,705 (the backlog in reporting the mortality rate is due to an ongoing audit by the Health Department). A total of 30,468,125 vaccines have been administered.

At least six vehicle plants around the US-Canada border have temporarily halted work as the impact from a protest blocking truck traffic into Detroit begins rippling through both nations’ economies. Law-enforcement agencies across the US are bracing for the possibility that a trucker protest could begin this Super Bowl weekend and carry into March.

Protesters against France’s vaccine mandates aim to use their vehicles to block roads in Paris beginning on Friday, as support for the “freedom convoys” that began in Canada spreads to other countries.

Italian nightclubs will reopen tomorrow, another sign Europe is beginning to live with the virus. In the UK, Prince Charles tested positive for a second time and is self-isolating. 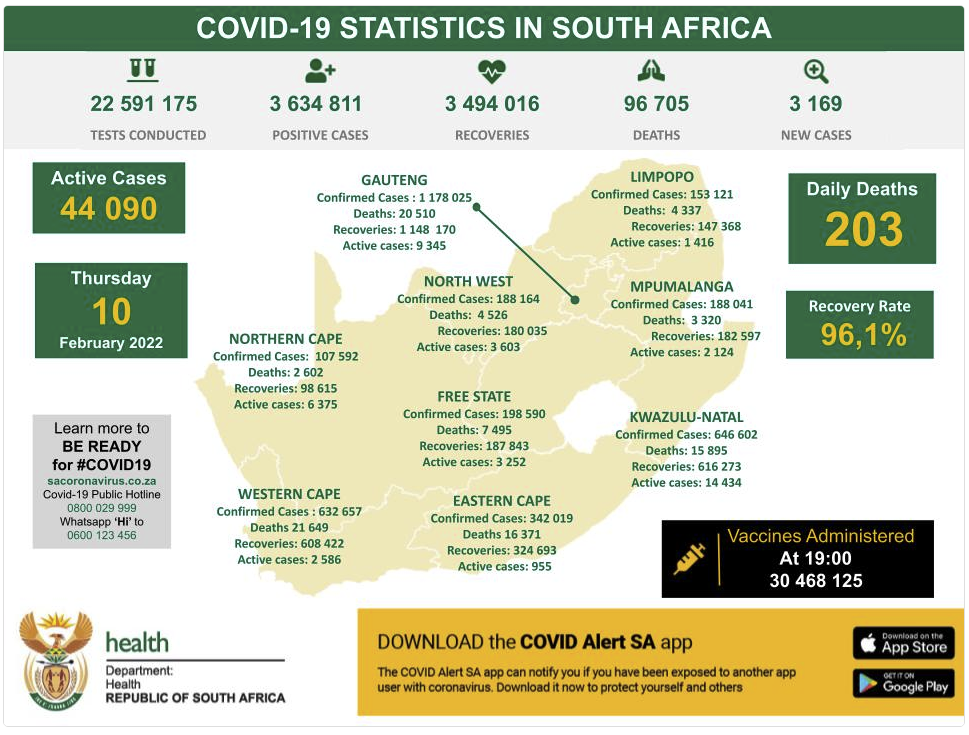 US braces for spread of trucker protest

Federal, state and local law-enforcement agencies across the US are bracing for the possibility of a protest by truckers that could begin this weekend and carry into March, potentially including a cross-country caravan and disruptions to cities and major transportation routes.

While it’s still not clear how serious the threat is, the US Department of Homeland Security warned law-enforcement agencies that protests could begin on 13 February when the Super Bowl is played in Los Angeles and arrive in the nation’s capital in early March. Truckers could time their protests to coincide with President Joe Biden’s State of the Union Speech on 1 March, according to a DHS alert.

At least six vehicle plants around the US-Canada border have temporarily halted work as the impact from a protest blocking truck traffic into Detroit begins rippling through both nations’ economies.

Toyota said it would halt operations at three plants in Ontario due to parts shortages caused by the bridge blockade. General Motors cancelled the evening shift on Wednesday and Thursday’s day shift at an SUV factory in Lansing, Michigan. Ford shut down an engine plant and cut the schedule at an assembly plant, both in Ontario, while Stellantis NV cancelled shifts on Wednesday night at multiple facilities in the US and Canada.

Finland will end testing and contact tracing for most of the population, leaving it up to people to test at home and isolate on their own when they have contracted the virus.

Testing and contact tracing will focus more on high-risk groups, pregnant women, healthcare and social workers, according to a statement on Thursday.

The Prince of Wales is self-isolating. It is the second time the heir to the throne Charles, 73, has contracted coronavirus, after he fell ill with the virus in 2020, the Press Association reported.

This morning The Prince of Wales has tested positive for Covid-19 and is now self-isolating.

Hybrid immunity ‘on the way’

Third vaccine shots, and hybrid immunity, which consists of a vaccination plus an infection, may be the sole way of easing the global health burden, aside from zero-Covid strategies, Bloomberg analyst Sam Fazeli wrote.

There’s a high likelihood of infected vaccinated people in general being able to deal with most future variants, Fazeli said.

AstraZeneca plans to expand a new unit focused on vaccines and immune therapies rather than sell it or spin it off, CEO Pascal Soriot said in an interview.

The business has been in the spotlight since the UK drugmaker in November announced its creation to focus on its Covid-19 shot, antibody combination and products targeting respiratory infections.

“We are planning to build this division, not to sell it or spin it off,” Soriot told Bloomberg Television on Thursday after the company said it expected sales to rise this year on growth in cancer medicines and its Covid treatment, Evusheld.

Protesters against France’s vaccine mandates aim to use their vehicles to block roads in Paris beginning on Friday. Police issued an order banning the demonstration from Friday to Monday, citing the risk of “disturbing the public order.” The protesters plan to continue to Brussels on Monday.

Hong Kong’s current social distancing rules won’t stop deaths, and nearly 1,000 residents may die by mid-June if there aren’t changes, according to researchers from the University of Hong Kong.

Mitigation measures are needed to cut transmissions by 85% to get through the outbreak while minimising fatalities, researchers said. The ultimate number of deaths depends on how long the city sustains the curbs now in place and any changes to them.

The city announced its first coronavirus deaths in five months, while reports said new cases would be around the 1,000 mark.

Italian outdoor and indoor nightclubs will reopen on Friday. Access will be allowed only to those showing a “reinforced green pass”, which can only be obtained with the vaccine or after recovering from Covid. Mandatory use of masks in the open will end all over the country.

The Omicron BA.2 subvariant makes up almost 100% of new coronavirus infections in South Africa, Tulio de Oliveira, a bio-informatics professor who runs gene-sequencing institutions and advises the country’s government on the pandemic, said on Twitter.

BA.2 appears to be more transmissible than the original Omicron variant. There is no indication that it causes more severe disease.

Still, while South Africa was the first country to experience a major Omicron wave, the number of infections has tapered off. On Wednesday the country reported 3,628 new cases, down from a record of almost 27,000 on 15 December. 15.

Germany reported 247,862 new Covid-19 cases, compared with 234,250 the day before, according to the country’s public health authority RKI.

China reported eight domestic Covid-19 infections on Thursday, down from the double-digit daily caseload seen for months as the country battled concurrent flare-ups across the country. All but one of the infections were from the southwestern border town of Baise, which has seen about 200 cases in less than a week as the Omicron variant seeded an outbreak during the Lunar New Year holiday last week. DM/MC

— With assistance from Dara Doyle