The (other) State of the Nation discussed on the street... 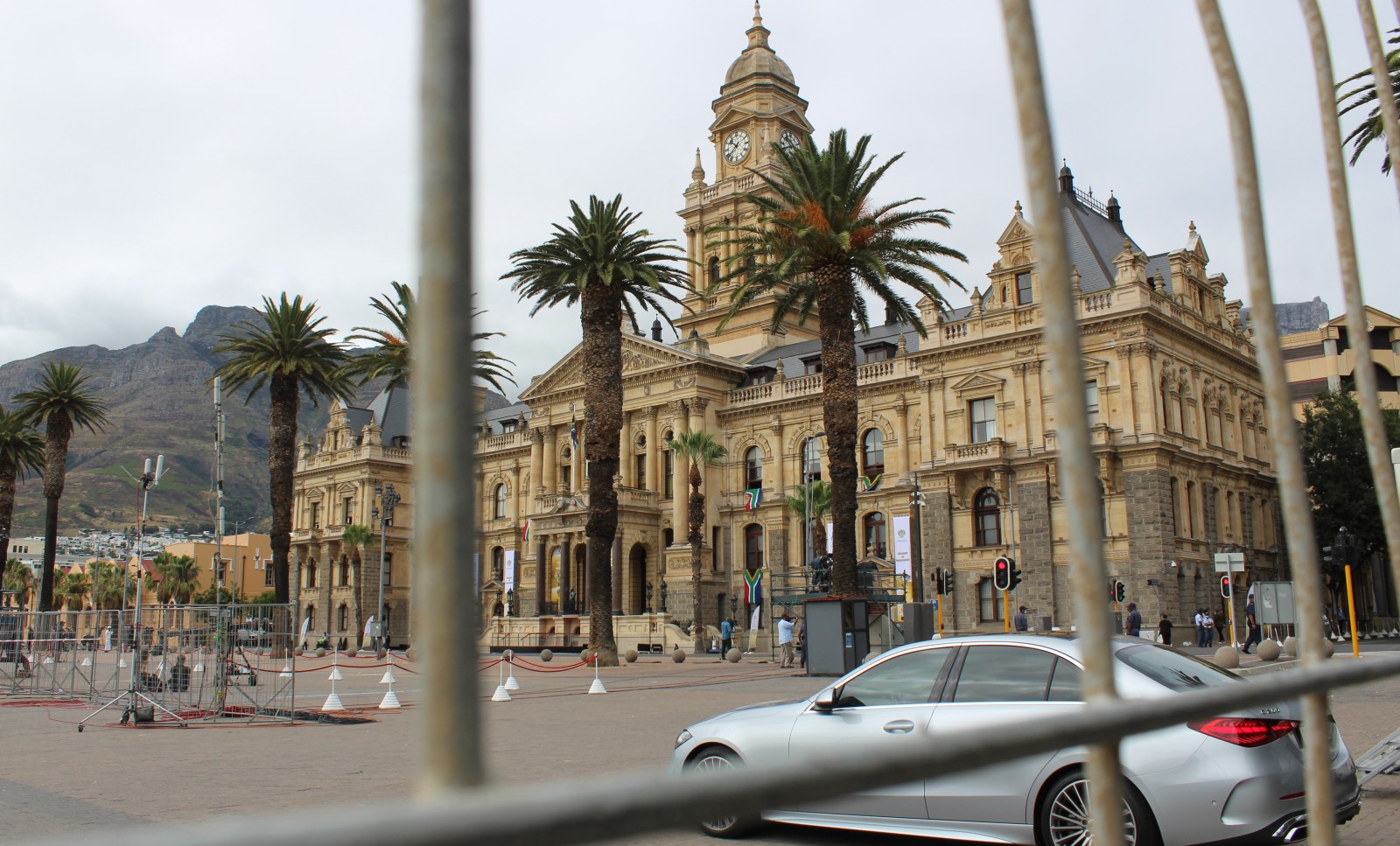 Grand Parade in front of Cape Town City Hall is fenced off in preparation for the State of the Nation Address on 10 February 2022. (Photo: Tamsin Metelerkamp)

The city centre was transformed into a maze of fenced-off walkways and no-go zones ahead of the State of the Nation address due to take place at Cape Town City Hall on Thursday night. Daily Maverick chatted to people on the street about what, if anything, Sona meant to them, and what they hope to see touched on in President Cyril Ramaphosa’s speech.

When Daily Maverick visited Grand Parade in Cape Town on Thursday morning, the space had been transformed in preparation for the evening’s State of the Nation Address, set to take place at Cape Town City Hall. The usual stalls and day traders had been replaced by metal fencing and police vehicles.

The edges of Grand Parade remained abuzz with city residents and commuters.

‘People are in need of answers’ — Mark Louw

“I just want to hear what [Cyril] Ramaphosa has to say and see how we can take the country forward,” said Mark Louw, a pensioner living in Cape Town.

“For the whole nation of South Africa, we just see what [Ramaphosa has] got to say, how we’re going to go forward from this year, because we have come through a very tough lockdown. So, main aim is to take the country forward.”

There is a lot of poverty in Cape Town that needs to be addressed, according to Louw. While there are work programmes that assist some people, there are many who remain destitute.

“We have to deal with [that], we’ve got a lot of people here who have nothing,” said Louw.

People are in need of answers with regards to corruption and recent events at the Parliament buildings, he added.

“[T]he investigation about the Parliament that was burning… all those things have to come out now. [I]s there still corruption? If there is, is it being addressed?” asked Louw. “And also the issue of Parliament that was set alight. There’s so many stories going around, you don’t know what the heck to believe. We need answers.”

Many people have lost interest in Sona, as there is a tendency for politicians to make promises that they do not follow through on, according to Amos Kamanda, who works in a shop alongside Grand Parade.

“What can I say, they say a lot of things that they don’t do, so many people lose interest,” said Kamanda. “They will come up with something, people will just say, ‘Oh, okay, it’s the government people and that’s that’. Nothing really [happens].”

While Kamanda has little interest in politics, he does hope that Sona will see an end to the lockdown, and “bring everything back to normal”.

Sona may be taking place next to Kamanda’s place of work, but he does not feel that it affects him.

“Many people are feeling like that. [Government] will say something and then they don’t do it. People are just living lies,” said Kamanda.

Sinovuyo Malawana, a Cape Town resident, said that her hope is for Sona to bring an end to the mask mandate, as “[the masks] have been suffocating”.

“The one thing that I think [Ramaphosa] needs to look at is the violence. There’s a lot of violence, especially in the location — I think he has to look at that,” said Malawana.

As a young South African, an issue that affects Malawana personally is the lack of jobs available for those her age. “As youth, we are really struggling in terms of jobs. We have qualifications, but we don’t work. So, I honestly feel like [Ramaphosa] needs to look at that too.”

Despite the issues facing the country, Malawana is optimistic about Sona and the potential for change.

“I believe there will be change, slowly but surely.”

While Luqmaan Anzenge, an Angolan national, said that he cannot speak for South Africans, he hopes that Sona will mark an improvement for the situation faced by foreign nationals in the country.

“Personally, the thing that affects me is immigration documentation. Home Affairs has been closed for quite a while, since Covid-19, for the foreigners,” said Anzenge. “Some of us, our documentation expired, and the only way to renew it is online, and the traffic is a bit high.”

Anzenge applied for renewed documentation six months ago and is still waiting for a response.

“There’s no clear specific advice in terms of how you can go about it, you just need to hold on, so basically if you’re studying or you’re working you’re constantly being reminded by your bosses or the institution that you need to bring proper documentation…so, you feel like you are being just an unwanted person in the country,” he said.

However, Anzenge is not optimistic about Sona addressing this issue. The government does not tackle immigration with African countries as much as it should, he claimed.

“[T]here’s not clear instruction from their side to us,” he said.

‘Why are we not trying to empower the homeless?’ — Michaela Geldhof

The Sona needs to involve a “good look” at South Africa, as the country seems to be going backwards, according to Michaela Geldhof, a Cape Town resident.

“I actually found myself in court yesterday, it was a court case, and if anything there needs to be a whole relook at the system. There were policemen in there who were making women feel very, very uncomfortable,” she claimed.

The address should focus not only on the struggles faced by women but also on other issues that need to be addressed straight away, said Geldhof.

She described the situation as heartbreaking, adding that the private sector seems to be doing more to hold up the country than the government currently.

The state needs to undertake more “real things that we can see are affecting our people”, said Geldhof.

While Geldhof is hopeful about the outcomes of Sona, she remained unsure of how much “wiggle room” Ramaphosa has to make change within the current system.

“I’m always hopeful, I do feel like there are some good eggs in the basket, but at the same time, unfortunately, they’re influenced by the bad eggs, and I think if anything Cyril has found himself in a very difficult position for a very long time,” she said. DM