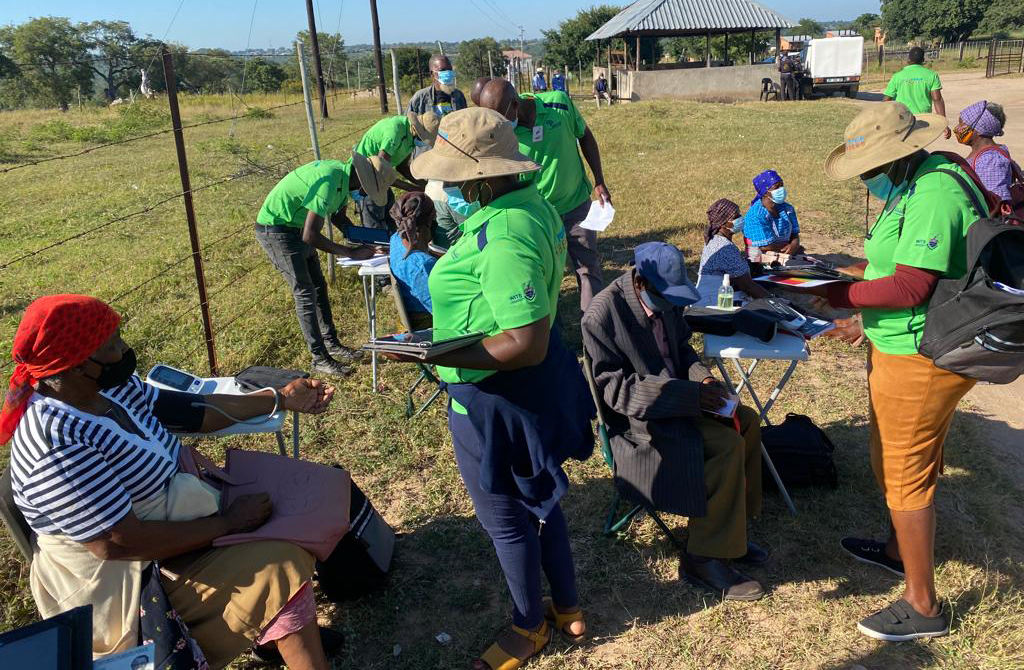 Pensioners in Bushbuckridge, Mpumalanga being screened for hypertension while they wait in line for their grants. The pilot project is by the South African Medical Research Council and SAMRC/Wits’s Rural Public Health and Health Transitions Research Unit. (Photo: Jane Simmonds/SAMRC/Wits)

About 60% of participants are found to have high blood pressure.

Hundreds of pensioners queuing for their old age grants are being screened and tested for hypertension at paypoints in Mpumalanga. In this way, care is provided where and to whom it’s needed most.

In total, more than 4.2 million people in South Africa aged 60 and older currently receive the Older Persons Grant. For many of them, particularly in rural areas, grant collection days often involve standing in queues for hours.

In a pilot project in Bushbuckridge, Mpumalanga, the South African Medical Research Council (SAMRC) and SAMRC/Wits’s Rural Public Health and Health Transitions Research Unit, are using these queues as an opportunity to take screening for hypertension to some of the most vulnerable and often neglected people in the country.

The project called “Know Your Numbers” was launched in April 2021 with 20 fieldworkers from local communities at six sites where hundreds of pensioners gather each month to collect their grants. The teams take people’s blood pressure using mobile Omron machines.

“Screening about 100 people per queue, we are picking up high blood pressure in about 60% of the participants. These people are all referred to their closest local clinic for further assessment, treatment and care as required. About 30% of the participants are male and about 70% female and that’s because there are sadly less men alive to collect social grants,” said Jane Simmonds, Know Your Numbers project manager at SAMRC/Wits’s Rural Public Health and Health Transitions Research Unit.

Hypertension is known as the ‘silent killer’ because there are no exclusive symptoms that point directly to the disease. A 2021 study by the SAMRC found that the prevalence of hypertension rose between 1998 and 2016, from 27% to 45% in men and 31% to 48% in women. This has a significant impact on the health of older persons. “Older adults contribute critical support to local households, fostering orphans, enabling schooling and countering food insecurity. We can ill afford a rising toll of deaths from stroke and heart failure, or greater vulnerability to Covid-19,” said Steve Tollman, Unit Director.

“Many people don’t have money to travel to the doctor or clinic before they’re already very sick,” said Simmonds. Measuring blood pressure in people standing in the queue could help them manage and improve their health and save them the costs and time involved in visiting a clinic for a simple monthly health check.

“People will not go to town or clinics for treatment or vaccines if they have to choose between spending their R1,800 grant on food or for transport,” said Simmonds, who lobbied for what became a successful project to offer the Covid vaccine directly to pensioners while they were queuing.

She explained how transport costs and problems accessing the Electronic Vaccination Data System (EVDS) had become barriers to vaccination for older people when the vaccine was first rolled out.

“When the Covid vaccines became available to people 60 and older in July last year, I thought that if we could meet people in queues for hypertension screening, then why not reach them for vaccines? I spent a lot of time talking to the Minister Of Health, Deputy-Director General or anyone that would listen to me about this concept. Eventually, the Solidarity Fund came on board to fund vaccine outreach sites through the national health department. These sites have done over 500,000 vaccines since July 2021,” she said.

Sassa’s Dianne Dunkerley told GroundUp that Sassa had agreed to a pilot project with strict conditions to protect the security of beneficiaries and to avoid prolonging their already lengthy wait in line.

Dunkerley said the project is being welcomed by older people. “Older people who didn’t realise they had hypertension were identified, and could then go to local clinics for treatment and further monitoring,” she said.

“In cases where people did not want to make decisions immediately, they were sent home with information to discuss with family and friends which is great.”

Dunkerly said Sassa “would not be averse to expanding this project to other provinces” and discussions were underway.

“We really have started seeing the benefits and the reduction of costs, both of transport and of time, for older people. We think that because they’re old, they don’t have anything else to do. Well, many pensioners look after entire families and do all kinds of things. Where we can minimise the time they spend looking for services, it really is a good thing,” she said.

Professor Andre Kengne, Director of the Non-Communicable Diseases Research Unit at SAMRC, told GroundUp, “Early lessons from the ‘Know Your Number’ project are strongly suggesting that the reach of prevention and control services for common health conditions, including chronic diseases such as hypertension, can be substantially improved by taking some of the essential services such as health screening and health promotion to the most vulnerable people in the community.”

He said older persons are the most affected by chronic non-communicable diseases and that improving the detection, linkage to care and control of those conditions through appropriate community-based approaches, significantly reduces the related harmful health effects.

The researchers hope that lessons from the ongoing and thorough pilot evaluations can be used to lobby the government to include screening and tests for diabetes, HIV, TB, cancers and other health issues which affect older persons. DM