Extending the Social Relief of Distress grant is not enough to alleviate plight of poor, says civil society 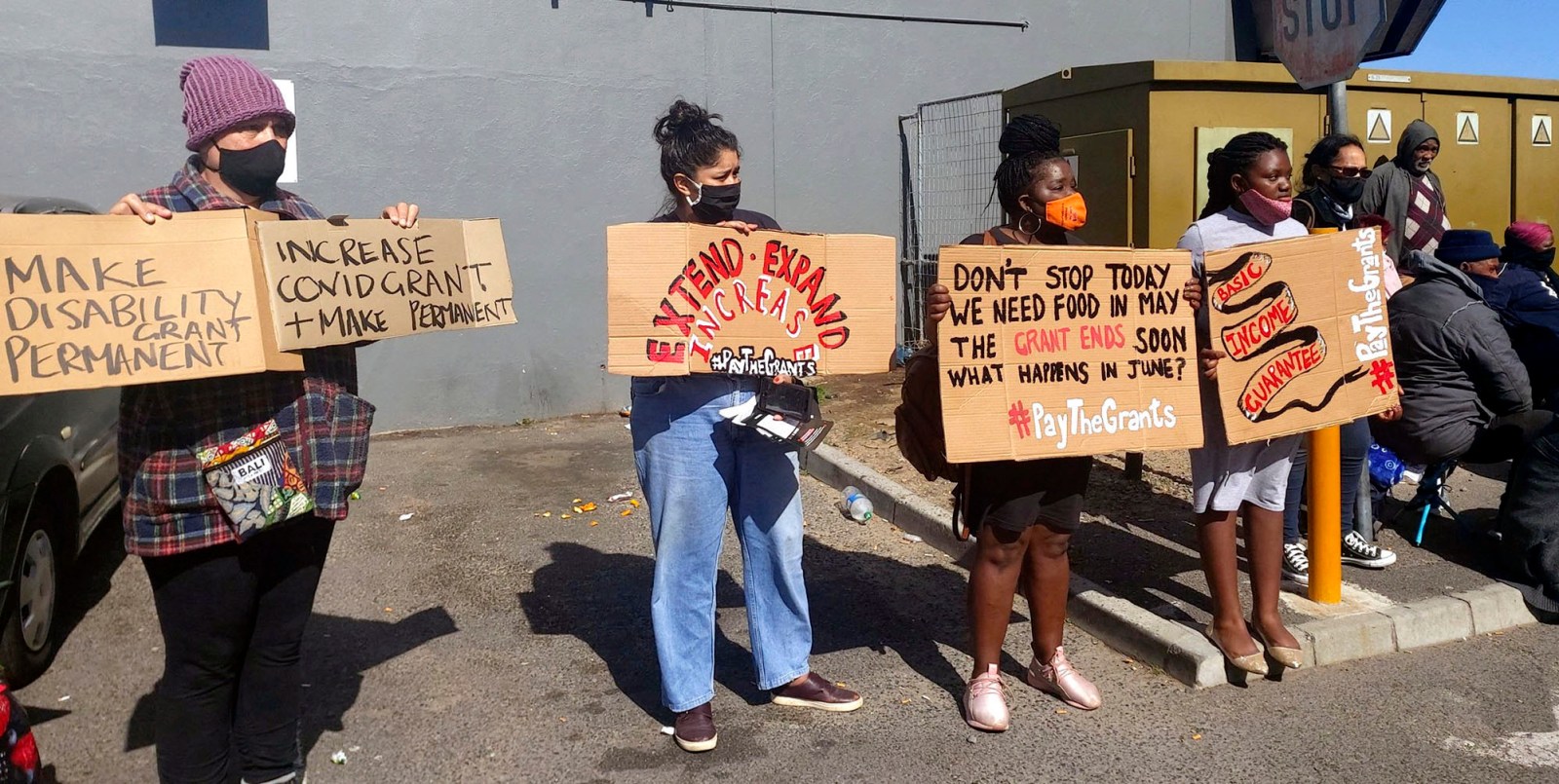 President Cyril Ramaphosa announced in his Sona that the Covid grant would be extended to the end of March 2023, but civil society says this is not enough to address the poverty and inequality in South Africa.

On Thursday evening, President Cyril Ramaphosa, in delivering his 2022 State of the Nation Address (Sona) from the Cape Town City Hall, said that since the onset of Covid-19, the Social Relief of Distress (SRD) grant had positively affected the lives of more than 10 million people, some of whom had even used the money to start small businesses.

Ramaphosa said that we must recognise that we face extreme fiscal constraints and that further deterioration would negatively affect the poor. The President announced that the SRD Grant would be extended to the end of March 2023. This, he said, was based on consultations with community-based organisations. He added that the government would continue to engage in broad consultations and detailed technical work to identify the best option for replacing the SRD Grant.

“It remains our ambition to establish a minimal level of support for those in greatest need,” he concluded.

Isobel Frye, the director at the Studies in Poverty and Inequality Institute (SPII), told Maverick Citizen she was, “struck by the imbalance between the new innovation in the private sector – from energy right through to digital spectrum – compared to the commitment and the ambition for poverty and inequality”.

Frye said while the President said that the SRD Grant would be extended, there was no stated increase on the grant which would be in line with inflation.

She decried, “the lack of any anti-poverty strategy in the face of the findings of the expert panel about the causes of the July 2021 violence, which had poverty and inequality being the root causes and for which the president announced that Cabinet must take responsibility.

“I would really have imagined that an urgent crisis committee be established in order to address the poverty and inequality rather than to give a begrudging 12 months extension of the SRD Grant, which is just over half of the food poverty line.

“We still think that a universal basic income grant of R1,335 per person per month with a net cost of R150-billion per annum, is really what we need. The research that SPII has done shows that it will come to a total of 5.2% of annualised growth.

“All in all, we think it was a Sona that recognised the interests of business; the point about poverty and the plight of the poor continues to be seen as an add-on rather than the primary focus of our economy, as the Constitution would suggest that the state should see it.”

Representing the #PaytheGrants campaign, Shaeera Kalla told Maverick Citizen: “If this pandemic has not made us rethink the false economic assumption that there has to be a trade-off between social protection programmes and job creation or social protection and efficiency, I do not know what will. When we are one of the most unequal countries in the world there can be no such trade-off.

“A well-designed social protection architecture is a basic constitutional obligation. It is not charitable goodwill from our leaders, it is a key engine for inclusive socioeconomic progress. The South African government cannot continue to justify a meagre R350 grant. The amount is insufficient and should be increased to at least the food poverty line.

“We also look forward to ongoing engagements with the President and ministers on parallel policies which must be implemented alongside a universal basic income guarantee/grant.

“We have been clear as civil society that the SRD Grant must be: made permanent until we have the policy framework for and implementation of a BIG; expanded to include refugees, permanent residents, asylum seekers and migrant workers with special permits and informal workers; increased to at least the food poverty line (currently R624); financed without cutting social spending; and made more accessible with an application system that is a hybrid model to ensure that it reaches those who need it, where a means test is not exclusionary by default and by increasing the income threshold of R595 to the upper-bound poverty line of R1,335.”

Hoodah Abrahams-Fayker, the national advocacy manager of civil society organisation Black Sash said: “The Black Sash welcomes the extension of the R350 Social Relief of Distress (SRD) Grant to March 2023… it is a work in progress and provides the most immediate pathway to a permanent basic income support programme and ultimately a universal income.

“Together with our community partners, the Black Sash will intensify advocacy efforts to ensure that the grant’s value is increased to at least match the food poverty line (currently R624).

“With the National State of Disaster ending soon, the R350 SRD Grant must now urgently be introduced into the social assistance legal framework to ensure uninterrupted payment to the recipients who depend on this grant as their only source of income and ensure its transition to permanent social assistance for those between 18 and 59 years with little to no income.”

Zukiswa Kota, Public Service Accountability Monitor programme manager for South Africa, said: “The extension of the SRD Grant is an encouraging response to the needs of the most vulnerable. However, it signals the need for a more sustainable, social justice-oriented response to devastating poverty and inequality.

“By and large, the various reform interventions (fiscal, procurement, accountability) that South Africa is desperately in need of were not evident in the 2022 State of the Nation Address despite the clear need for  a decisive, robust ‘new dawn’.”

Kelle Howson, a senior researcher at the Institute for Economic Justice (IEJ), said the organisation welcomed the president’s announcement of the extension of the SRD Grant.

“The grant is a vitally important safety net in the context of widespread unemployment, poverty and hunger. We also welcome the President’s signalling of the intention to eventually replace the SRD with other measures, and, while vague, ambition to establish a minimum level of support.

“The SRD in its current form is insufficient to alleviate the scale of the crisis of deprivation we face. We need greater clarity from the Budget as to its improvement. R350 makes no sense and is not linked to any objective measure of poverty. That’s why we have recommended to government that the SRD be transitioned from the temporary legal framework of the State of Disaster to become a permanent provision.

“We have called on government to commit to the expansion of the SRD into a universal basic income guarantee reaching the level of the upper-bound poverty line in the medium term, as has also been argued by the DSD [Department of Social Development] panel of experts.

“We will engage further with President Ramaphosa to advance the evidence as to why minimum income support should take this form. We look forward to the rapid and focused review and consultation on options for universal income support that must now follow.

“The statement that whatever replaces the SRD Grant shouldn’t compromise public services echoes the views put forward by the IEJ and civil society partners in our meeting with the President. But this will only be possible if the extreme austerity stance is abandoned.

“Instituting universal income support in the medium term will do much more to stimulate the economy than more aid to businesses such as expansions to the ETI [employment tax incentive], the benefit of which is supported by scant evidence.

“Rigorous financial analysis has been undertaken to show that there is fiscal space and feasible financing options to expand social protection. Universal basic income support can be financed through a number of progressive taxation options which redistribute a small proportion of income from the wealthiest in our society to the many who are without income.” DM/MC