Boring to death: Meet the rampant beetle posing a huge... 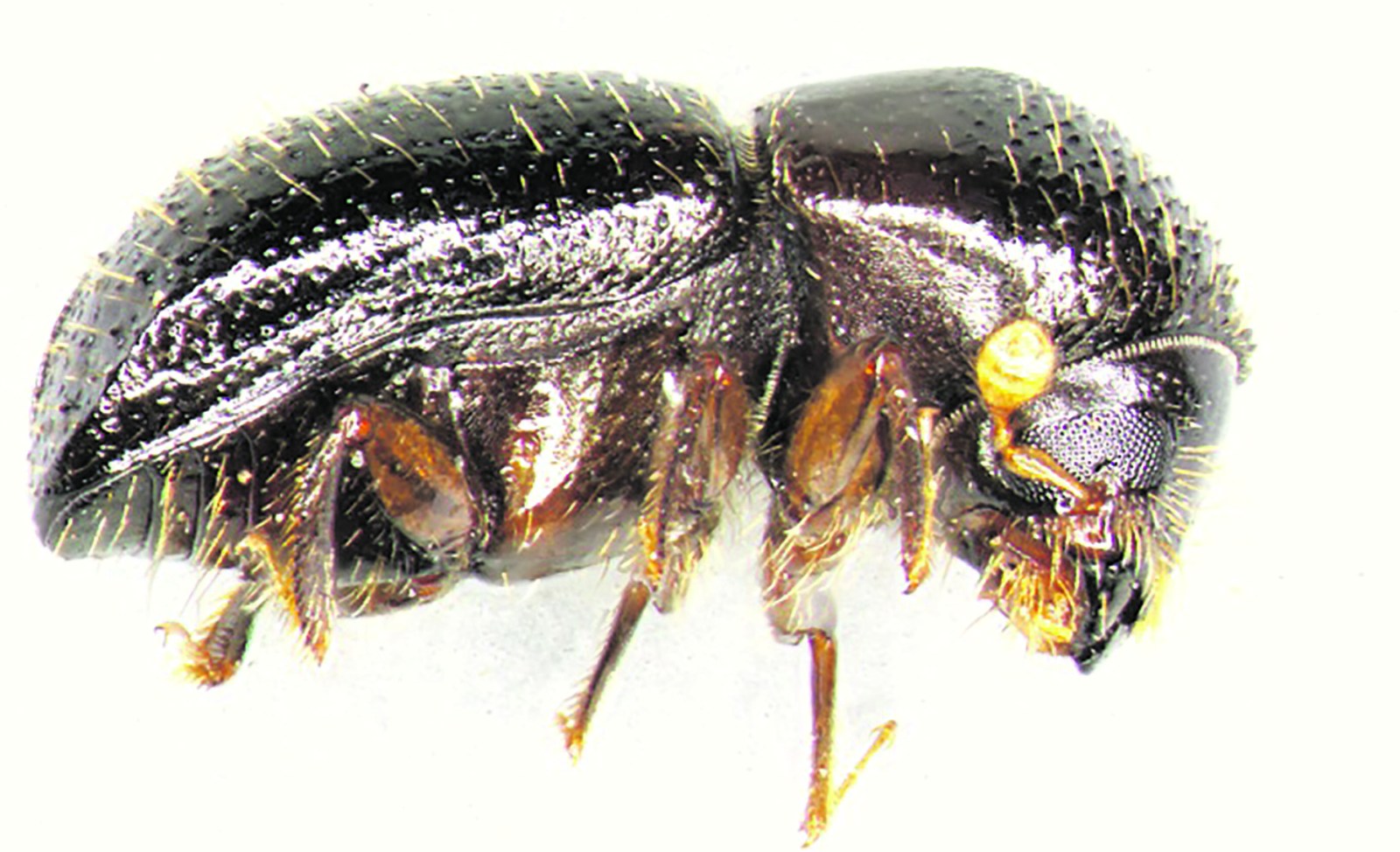 The shot hole borer beetle has become a threat for historically important trees in the Western Cape. The beetle is 7km away from Stellenbosch’s tree-lined streets. Once it arrives there, it will be ‘too late’.

Since 2019, more than 1,000 trees in Somerset West in the Western Cape have been cut down due to dieback caused by a tiny beetle that bores into tree trunks. It leaves behind a fungus that threatens to kill.

The beetle, known as the polyphagous shot hole borer (PSHB) beetle, is small, being only 1.5mm to 1.7mm long – about the size of an ant. But its activity on susceptible tree varieties has calamitous consequences, taking down ramrod-strong and old oak trees.

Somerset West is a hotspot area in the City of Cape Town where these invasive beetles have spread in the Western Cape, according to Professor Francois Roets, head of the Department of Conservation Ecology and Entomology at Stellenbosch University.

Roets, who is currently conducting research on the beetle, said that part of the reason Somerset West is heavily infested is because of slow reaction in detecting the beetle.

“The whole of Somerset West are not playing their part,” said Roets, adding that residents don’t want to cut down their trees because initially the infected trees look fine.

Cape Town’s deputy mayor and mayoral committee member for spatial planning and environment, alderman Eddie Andrews, said the City’s current strategy and aim is to contain the infestation to the Somerset West area.

“According to our most recent records, the beetle has not been found elsewhere in Cape Town,” Andrews said.

The City is felling, chipping and incinerating highly infested and reproductive host trees.

While the beetle hasn’t yet arrived in Somerset West’s neighbouring town, Stellenbosch – which is renowned for its historically important trees, especially its oaks – it’s on its way there, only 7km away, Roets said.

Stuart Grobbelaar, spokesperson for Stellenbosch Municipality, said the municipality has plans to preserve its trees.

“Once an infected tree is identified and experts have analysed the situation, the tree will be treated or removed and disposed of safely.

“Residents are encouraged to inform the municipality when they spot holes the size of a toothpick on the trunk or branches of trees. These holes can be with, or without, the white wood powder and are usually found in the cracks of thick bark.”

But according to Roets, the beetles should be monitored using traps before they invade the town’s trees, of which many are highly susceptible to the beetles’ fungi. “Once found in Stellenbosch, people will find it is too late.”

The beetle invader, which originates from South East Asia, is moving all over the country. The Forestry and Agricultural Biotechnology Institute (FABI) team from the University of Pretoria first detected the PSHB in South Africa during routine tree health monitoring at the KwaZulu-Natal National Botanical Garden in Pietermaritzburg.

“The first evidence of the beetle in South Africa is from a DNA barcode of insects collected in Richards Bay in 2012,” said Roets.

The City of Cape Town seems to be the only municipality proactively working from the start to mitigate the beetle’s spread, said Roets.

“Other municipalities across the country have been slow to react,” he said. “Now the focus is on removing heavily infested trees to reduce the impact and possibility of further spread, but it is likely that it will travel to numerous new destinations in the coming years.

According to a November 2021 paper, The Polyphagous Shot Hole Borer (PSHB) beetle: current status of a perfect invader in South Africa, there is great risk of accidental introductions of the beetle owing to limited inspections – “a consequence of a lack of trained personnel and funding”.

The tiny beetles are easily missed, hitchhiking on goods and material such as nursery stock, and they contaminate wooden products, the paper states.

According to Roets, the beetle – which feasts on English oaks, Acer species, willow trees, box elders and plane trees – is able to spread at a rate of about 4km per year on its own.

“Oak trees may die within three years of first infestation… Some box elder trees have died much quicker than this… Plane trees take a long time to succumb, more than five years,” he said.

First indications of infestation are unassuming, with some trees showing tiny holes on the bark. Other signs include stain marks on the bark, the oozing of tree gum or frass (a powdery refuse) on the trunk or branches, and sudden branch dieback.

While the initial signs can go unnoticed, “in one or two years’ time the problem explodes and you need to cut down dying trees”, Roets said. So far, there is damage worth about R10-million – R3-million from monitoring and tree removal, and an estimated R7-million being spent on the replacement of trees, he said.

Over the next 10 years, hundreds of thousands of trees would be lost, Roets predicted.

The beetle “was most likely transported to Somerset West in leftover firewood from the George/Knysna area in 2019 and has been spreading in this area since then,” Roets said. “It is starting to move into more natural areas as well, [like] the Helderberg Nature Reserve – the Keurboom especially.”

Some neighbouring farms in the area are in a worse situation.

At Lourensford in Somerset West, more than 100 trees are affected and so far 30 have been cut down after showing signs of dieback, said Koos Jordaan, general manager at the estate.

“Fortunately we have not yet had any infections in our fruit trees, nor indigenous trees,” Jordaan said.

“After cutting the tree, we chip everything and put it in massive plastic bags. The bugs die eventually due to the [rise in] temperature. It also prevents the beetles [from spreading].”

Koos said they had already started monitoring three years ago, but only picked up the first infestation early in 2021. There are now 148 traps to monitor the population and spread.

Vergelegen put strict measures in place to avoid contamination, such as banning the transport of firewood onto the estate, and installing monitoring traps and repellent on the farm border, said Naidoo.

Historically important trees on the estate include five camphor trees planted more than three centuries ago and declared national monuments in 1942, and an English oak believed to be the oldest oak tree in South Africa.

“These are classed as champion trees and are protected by the National Forests Act 1998. Thus they represent the potential loss of part of the country’s arboreal and cultural history,” Roets said.

Given Vergelegen’s history and biosphere, a natural research lab is running an intensive three-year research project, said Roets, which conducts research at Vergelegen.

Their research has proved that chemical lures are crucial in keeping the infestations low at initial stages of invasion, and that some pesticide injections may slow down infection rates.

But not all trees react in the same way. In some cases these are not effective.

“Chemical control experiments have started and we will get our first results within the next two months,” said Roets. DM168