Graeme Smith and Mark Boucher were legally appointed by the former board, CSA admits 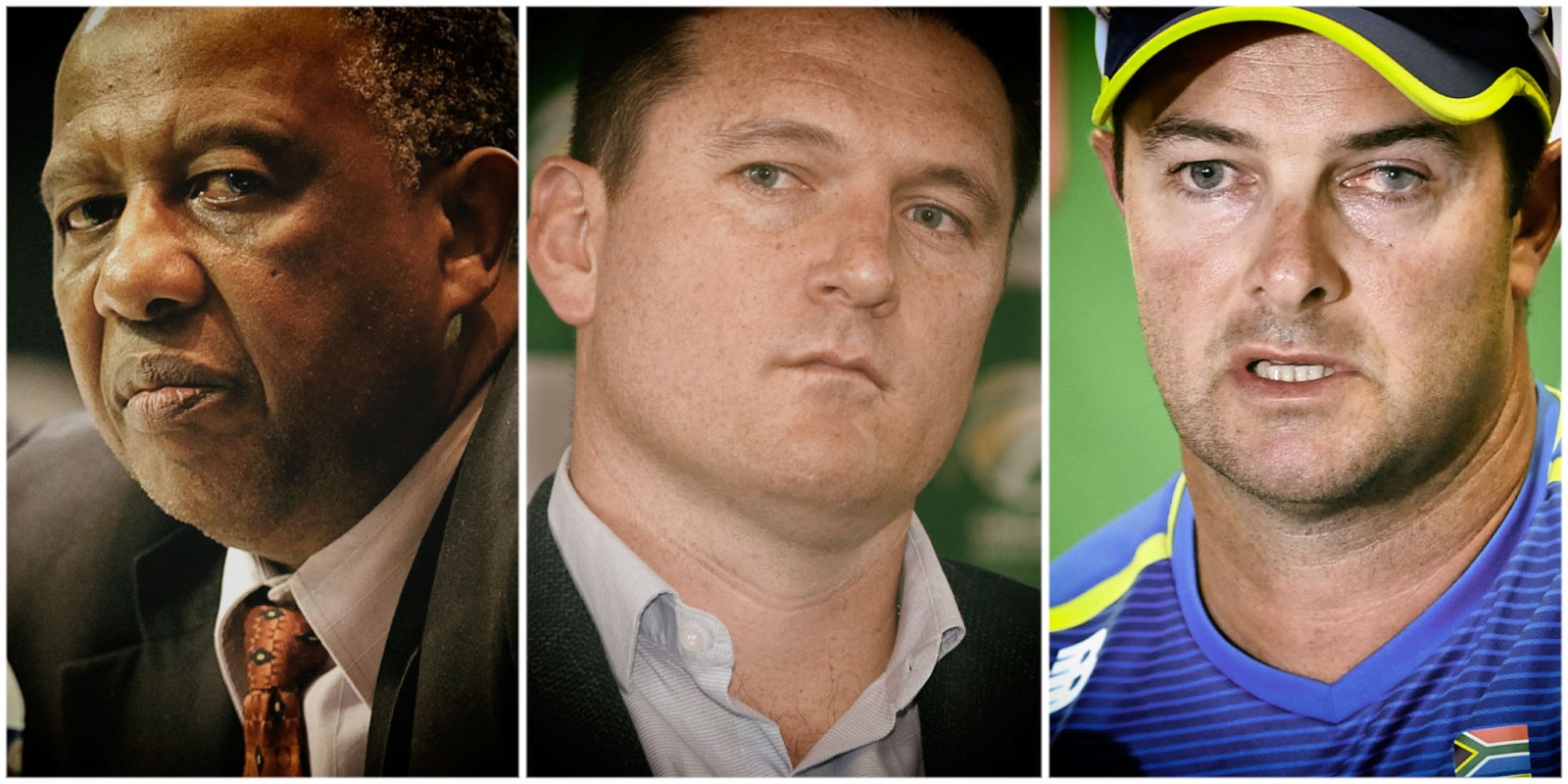 Cricket South Africa board representatives clarified that national director of cricket Graeme Smith and head coach Mark Boucher were appropriately appointed — by the former board.

In a presentation to Parliament’s portfolio committee on sport, questions were raised about the status of Graeme Smith and Mark Boucher’s positions based on findings in the recently concluded Social Justice and Nation-Building (SJN) hearings.

In the final report from those hearings, submitted to CSA last December, SJN ombudsman advocate Dumisa Ntsebeza SC found there were irregularities in the hiring of the two.

At Tuesday’s meeting with the portfolio committee, current CSA chairperson Lawson Naidoo exonerated the new board, whose members took up their positions last June, from any fault in Smith’s appointment and his subsequent appointment of Boucher.

“The director of cricket and head coach were appointed in December 2019 under the previous board. It is clear from the [SJN] report that there were irregularities in those processes. Those appointments were subsequently endorsed and ratified by the then board. Our hands are tied in terms of those processes,” Naidoo said.

The “irregularities” only seem to exist selectively.

Although the board advertised to fill the position of director of cricket, Smith was head-hunted in late 2019 by the board, which at that stage included the then president, Chris Nenzani, and chief executive Thabang Moroe.

Smith made it clear at the time that he felt he couldn’t work with the board, which was mired in controversy. He was finally persuaded to take on the role after Nenzani and other board members aggressively pursued him.

Naturally, that put Smith in a strong bargaining position, and after receiving reasonable assurances that he would be allowed to do his job without interference, he accepted the role. That’s how head-hunting works.

The final SJN report stated that despite the fact that CSA had advertised the position, Smith’s appointment was a foregone conclusion.

One of Smith’s first acts was to appoint the Proteas coaching staff soon before a three-Test series against England. Smith approached Boucher and recommended him as head coach to the board over Enoch Nkwe, who was the interim head coach on the earlier 2019 tour to India.

Smith’s recommendation was made just two weeks before the England series started. Smith also recommended Charl Langeveldt and Justin Ontong as bowling and fielding coaches respectively. All three positions were ratified by the board.

Yet subsequently, Boucher’s appointment was seen as cronyism by some, even though the coach had won five trophies in domestic cricket.

As part of Smith’s mandate, he had the power to recommend a preferred coaching candidate for the Proteas to the board. Smith chose Boucher, who is also a friend and former teammate. No doubt there was some bias, but that’s how trust works.

Smith trusted Boucher as the best candidate for the position of head coach at a difficult time in cricket. The board was in turmoil, sponsors were fleeing, and the Proteas men’s team needed rebuilding. Smith had also played a significant amount of cricket with Ontong and Langeveldt. But those appointments don’t appear to have endured the same scrutiny.

It’s common practice for directors of cricket/rugby/football to recommend preferred candidates for jobs based on a combination of science, gut and their extensive understanding of the game. It’s the reason directors of sport are in those positions in the first place, otherwise coaches would be selected by human resources departments.

Quite simply, in a high-performance sporting environment, appointment practices do not mirror those in the corporate world.

If that were the case, Jacques Nienaber would not be the Springbok coach, as he had never held a head-coach position in his entire career before being named Bok head coach in 2020. Under him, the Boks have retained the No 1 world ranking.

But the SJN findings didn’t appear to consider the unique environment of high-level sport and the sometimes opaque world of trust between senior figures that can build sporting success.

“Mr Smith does not explain how he arrived at the decision of appointing Mr Boucher,” the 235-page SJN report stated.

“There is no mention whatsoever of the CSA HR manual having been applied by Mr Smith and CSA in the appointment of Mr Boucher and other appointments made during that period in question.

“At paragraph 65 (301), Mr Smith highlights Mr Boucher’s success [in] cricket during the latter’s playing days, he does not venture at all to explain the process he followed in appointing Mr Boucher ahead of Enoch Nkwe, who was at that time an interim head coach of the Proteas.

“That he was not told or advised by the CSA Board, CEO etc to comply with the HR manual when making appointments does not absolve Mr Smith from his responsibility as a senior employee of CSA at the time to comply with its provisions.

“Mr Smith needs to understand that he was handsomely remunerated for his position and professed to possess all the attributes for the position in question, one such attribute is familiarity with governance controls in the organisation.

“That the board did not stop him does not render his conduct regular and excusable.”

Smith’s contract ends on 31 March and it’s unlikely he will stay on, despite various sources confirming the excellent role he has played. His stature in the game, as a former captain of the world’s best Test team, opens many doors. Smith was instrumental in ensuring India toured South Africa in December and November, which secured R600-million in revenue for CSA.

Smith also holds the key to many current ongoing negotiations, but his departure seems likely, even though he is extraordinarily well compensated. CSA’s new leadership clearly wants to go down a different path.

Boucher has slowly rebuilt the men’s team from rabble to a unit that recently won five out of six matches against India in two formats of the game. But he has been brought up on charges of “gross misconduct” for his role in racial slurs against teammate Paul Adams more than 20 years ago.

Boucher is also charged with poor handling of the Black Lives Matter movement and for allegedly failing to set clear guidelines for Nkwe, who was his assistant coach for 18 months.

The hearing is set for 16-20 May, with Terry Motau SC presiding over the dispute.

CSA was asked by members of the portfolio committee why Boucher and Smith had not been suspended, although none of the portfolio delegation could articulate why they wanted Smith suspended. He hasn’t been brought up on any formal charges by CSA.

Sports Minister Nathi Mthethwa and the ministry’s director-general, Vusumuzi Mkhize, were also in attendance at the meeting and they steered clear of asking about Boucher and Smith’s suspension as some delegates demanded.

“That [suspending CSA employees] is not a ministerial responsibility,” Mkhize said. “The minister may not deal with employees of the board unless there has been a clear breakdown of governance. We encourage them to move with speed.”

“It’s important to state, and this applies to all the legal processes we are involved in, we will follow due process,” Naidoo told the committee. “I can assure the portfolio committee that the board took legal advice on whether that [suspension] was possible and we received the legal opinion from two senior lawyers.

“They advised us that there was no legal basis to suspend Mark Boucher and Graeme Smith. The board took a unanimous decision not to suspend because it would open us up to unnecessary litigation.”

If there isn’t enough evidence to suspend Boucher, it does raise the question: is this entire exercise nothing more than a search for a scapegoat to offer up as a sacrifice after the publication of the SJN report? DM