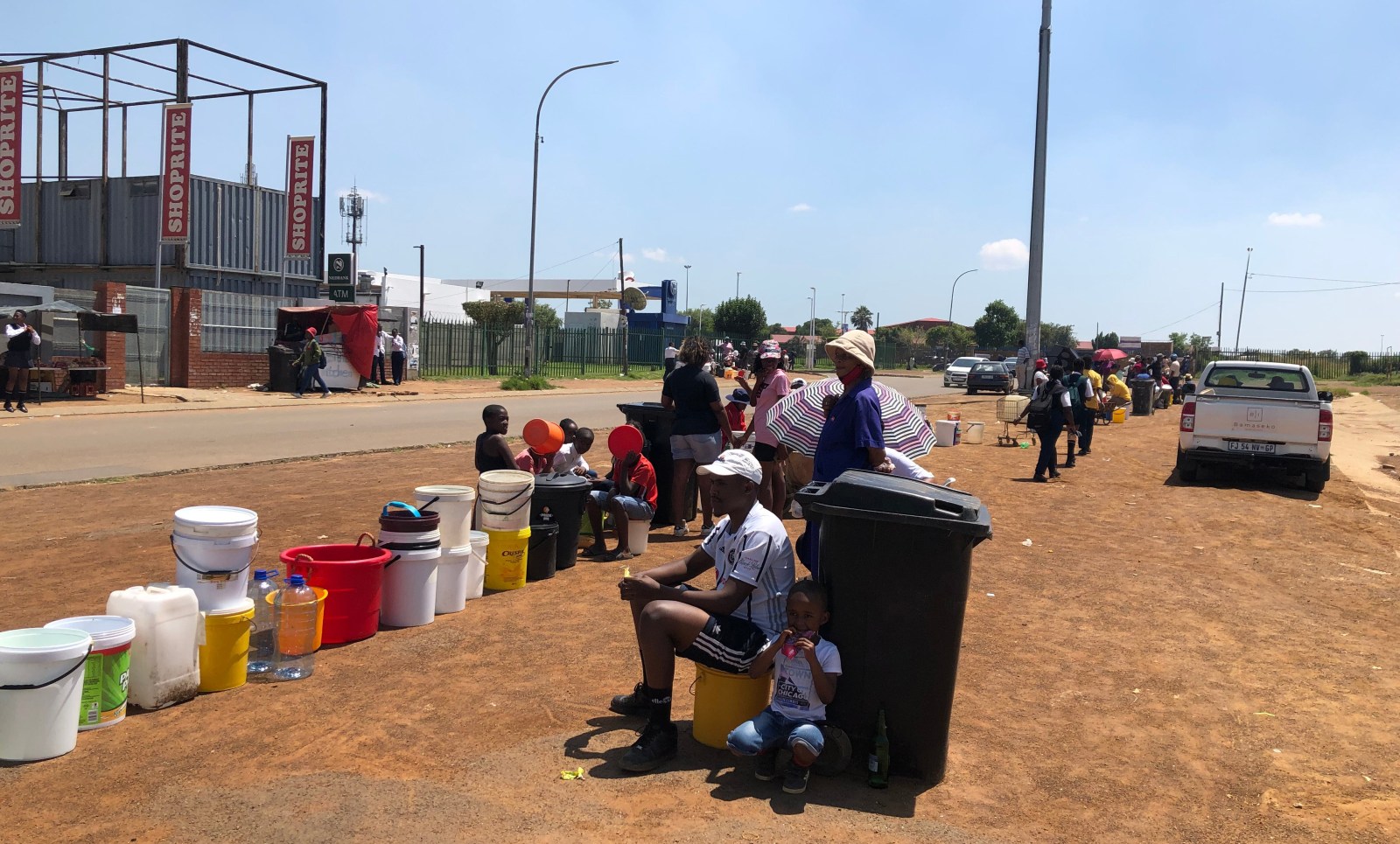 One of many snaking queues of Ekurhuleni residents waiting to get water from municipal tankers. Parts of Tsakane and Brakpan have been without water since last Monday. (Photo: Kimberly Mutandiro)

Brakpan and Tsakane families have been forced to cope without water for a week.

Some unemployed residents in Ekurhuleni have turned a water crisis into an opportunity to make ends meet by charging people to collect water in containers for them.

It’s been a week since taps in some townships ran dry without any warning from the municipality. According to a statement by Rand Water on Sunday, this is the result of a transformer tripping Eskom’s power supply at Rand Water’s Mapleton Booster Station. It is not clear when power will be restored to the station.

In a statement on Tuesday morning, the City said water tankers were being sent to different areas but because of the limited number of water tankers, the trucks would drive along the main roads rather than being stationed at one spot.

But at around 9:30pm the City put out another statement on social media which said, “The power has since been restored and Rand Water is now pumping water at full capacity.” On Wednesday we confirmed that water was running in parts of Tsakane but taps in homes in areas like Langaville and Geluksdal in Brakpan remain dry.

“The past few days have been worth my while. My water fetching services are in demand,” says 26-year-old Sibusiso Khumalo. He is unemployed and lives in Toyi Toyi informal settlement in Tsakane. Since the start of the water outages last Monday, Khumalo has been fetching water about five kilometres away with an old shop trolley for residents. He charges R10 for every 20 litre container of water.

He makes deliveries to his clients up to five times or more per day. He says this means he has been able to buy himself food.

“l don’t wish for this crisis to continue because even members of my household are suffering to get water. But in a way it has been a blessing in disguise for some of us who are unemployed, making the most of the moment because there are no jobs,” he says.

Nqoko Tshefu, who is unemployed, says he uses two wheelie bins to carry two 20-litre containers with water. Per trip, Tshefu says he makes about R40 and about R250 per day.

In many parts of Tsakane and Brakpan, people were standing in long queues with empty containers waiting for their chance to get some water. Some queue from as early as 6am daily for the City’s tankers.

Beauty Mthembu, 62, from Extension 19 says she wakes up early every day to stand in line for water because she can’t afford to pay anyone to get it for her. The nearest collection point is about six kilometres from her home. “My toilet stinks without water and l need to do some washing for my grandchildren. I just have to make sure that l leave just one cup to drink my medicine,” she says.

City of Ekurhuleni spokesperson Zweli Dlamini said, “We have provided water tankers in public places to provide relief. But this is an Eskom power issue. At this moment we cannot say when the problem will be rectified.” DM