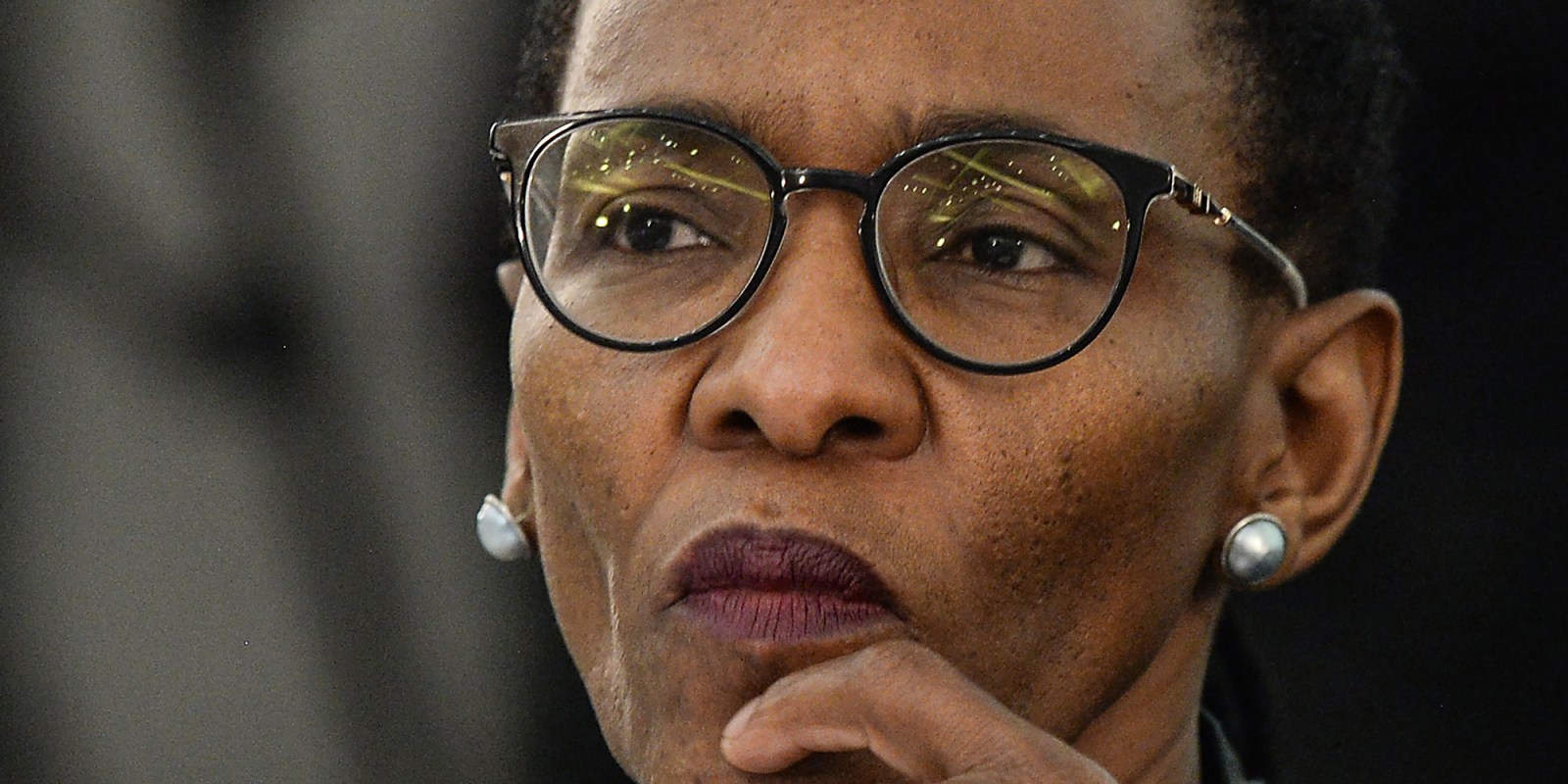 Judge Mandisa Maya at her interview for the position of Chief Justice in Sandton on 2 February 2022. It was clear even before the interviews began that she was likely to be a frontrunner. (Photo: Felix Dlangamandla / Daily Maverick)

The process of appointing South Africa’s next Chief Justice was never going to be simple. So, what went wrong, is it as bad as it seems, and where do we go from here?

There was an unprecedented process involving the consideration of four candidates for the position of South Africa’s next Chief Justice, part of which involved public interviews by the Judicial Service Commission (JSC), a body that has been subject to much criticism over the years and in 2021 had rerun interviews for positions on the Constitutional Court.

Last week’s interviews of the four candidates and the JSC’s ensuing recommendation of Justice Mandisa Maya have generated another firestorm of criticism. The JSC has been accused of usurping the President’s discretion to appoint the Chief Justice. The inconsistency between the interviews and the nature of some of the questions asked have led to threats of legal challenges to the JSC process, and to calls for the removal of certain commissioners, including politicians, from the JSC.

We have been here before. The 2011 interview of former Chief Justice Mogoeng Mogoeng also sparked widespread criticism. It was hoped that, by employing a more open and competitive process that allowed multiple candidates to be considered, the divisive discourse that followed Justice Mogoeng’s appointment as Chief Justice would not be repeated. Sadly, this has not been the case. Perhaps it is unrealistic to expect that a position as important as the Chief Justice will not be the subject of bitter contestation, especially in South Africa’s current political environment.

It is not possible to conduct an in-depth analysis of all the issues which arise from the interviews in this article. We do think it necessary to comment briefly on some of the main issues which have arisen, and to discuss some of the major criticisms that have been made of the JSC, well-founded or otherwise.

Not fair to ask Maya to decline the appointment

First, Justice Maya is a strong candidate. It was clear even before the interviews began that she was likely to be a frontrunner, as she was not politically contentious, and would make history as the first woman to become Chief Justice. She may well have been the President’s choice regardless of what the JSC said.

In her interview, Justice Maya laid out a comprehensive vision for the judiciary and highlighted numerous areas where reforms are urgently needed. There seems to be some anxiety about the JSC’s recommendation of Justice Maya because she was not subject to the attacks that were so prominent in Judge President Dunstan Mlambo and Deputy Chief Justice Raymond Zondo’s interviews. Again, the pushback against those two candidates was not unexpected. But it does not follow from what happened in their interviews, or from her track record, that Justice Maya is beholden to some or other political faction. A better explanation of the uneven treatment of the candidates is that there are those on the JSC who are not so much pro-Justice Maya as they are anti-JP Mlambo and DCJ Zondo. Justice Maya’s record indicates an independent and groundbreaking jurist. It hardly seems fair to expect her, as some have suggested, to decline the position because of the JSC’s ineptitude in dealing with other interviews.

Removing politicians will not help

Second, to diagnose the problems of the JSC as being due to the presence of politicians would not be accurate. It is true that many questions asked by some politicians were problematic. But, not for the first time, lawyers on the commission were responsible for some of the most problematic lines of questioning. Removing politicians from the JSC would therefore not address the underlying problems exhibited last week.

Litigation is not the solution

Third, while the JSC left itself open to litigation on several grounds, we do not believe that this is the solution. Following the legal challenge brought by Casac, the April 2021 Constitutional Court interviews were rerun. While the tone and questioning were improved at the second time of asking, exactly the same candidates were selected. Some attributed the improvement to the chairing of DCJ Zondo. What practical value would be served by ordering the JSC to redo these interviews – particularly as the Constitution states that the JSC’s role in the appointment of the Chief Justice is only advisory?

There have been concerns raised that, by recommending a single candidate, the JSC has unlawfully fettered the President’s discretion. We think the President remains free to make a different choice, provided the recommendation is properly considered and there are good reasons to deviate from it. The JSC has indicated that it would provide a report to the President, and the content of that report would be important to consider. It is important to remember that this is an unprecedented process where the JSC had to weigh up the merits of four candidates. Before the interviews, would it have been said that earmarking one candidate as the outstanding choice was impermissible?

The bigger issue is that the JSC appears to have commenced the process without any clarity or agreement about what it was actually going to do in terms of advising the President. And this leads to our final point: the absence of fundamental reform to the JSC renders litigation largely fruitless.

The interviews did demonstrate very clearly that there is an urgent need for reform of the JSC. Justice Maya herself appeared to acknowledge that this is necessary when she agreed that a proposed workshop of JSC members before the commission’s April 2022 sitting was a good idea that should be taken forward by whichever candidate is appointed.

After the events of last week, the challenges are impossible to ignore. Reform needs to address many issues, central among which is the need for the JSC to identify and make public more detailed criteria, and flowing from that, to define the scope of permissible questioning. The JSC clearly needs to formalise rules for dealing with adverse comments about candidates and to develop a code of conduct or other formal regulation of the conduct of commissioners, including processes to deal with their recusal.

The JSC is too important an institution to allow it to fail. And despite all the angst of last week’s hearings, there remained some green shoots of promise. The first two days of interviews were relatively well focused, before politics took over on the second two days. Allowing candidates an uninterrupted time to articulate their vision for the judiciary is a good idea and one that should be implemented in all interviews for judicial leadership positions. Ensuring that these more positive signs become the norm, rather than the exception, should be right at the top of the in-tray of the new Chief Justice when they are appointed – whichever of the four candidates that may be.

It has now been more than 120 days since South Africa last had a permanent Chief Justice. It is important that the appointment is made without further delay so that whichever of the four strong candidates is appointed can begin to address the multitude of challenges facing the judiciary. DM

Judges Matter is a civil society project that monitors the appointment of judges, their discipline for misconduct and the governance system of the judiciary in South Africa.