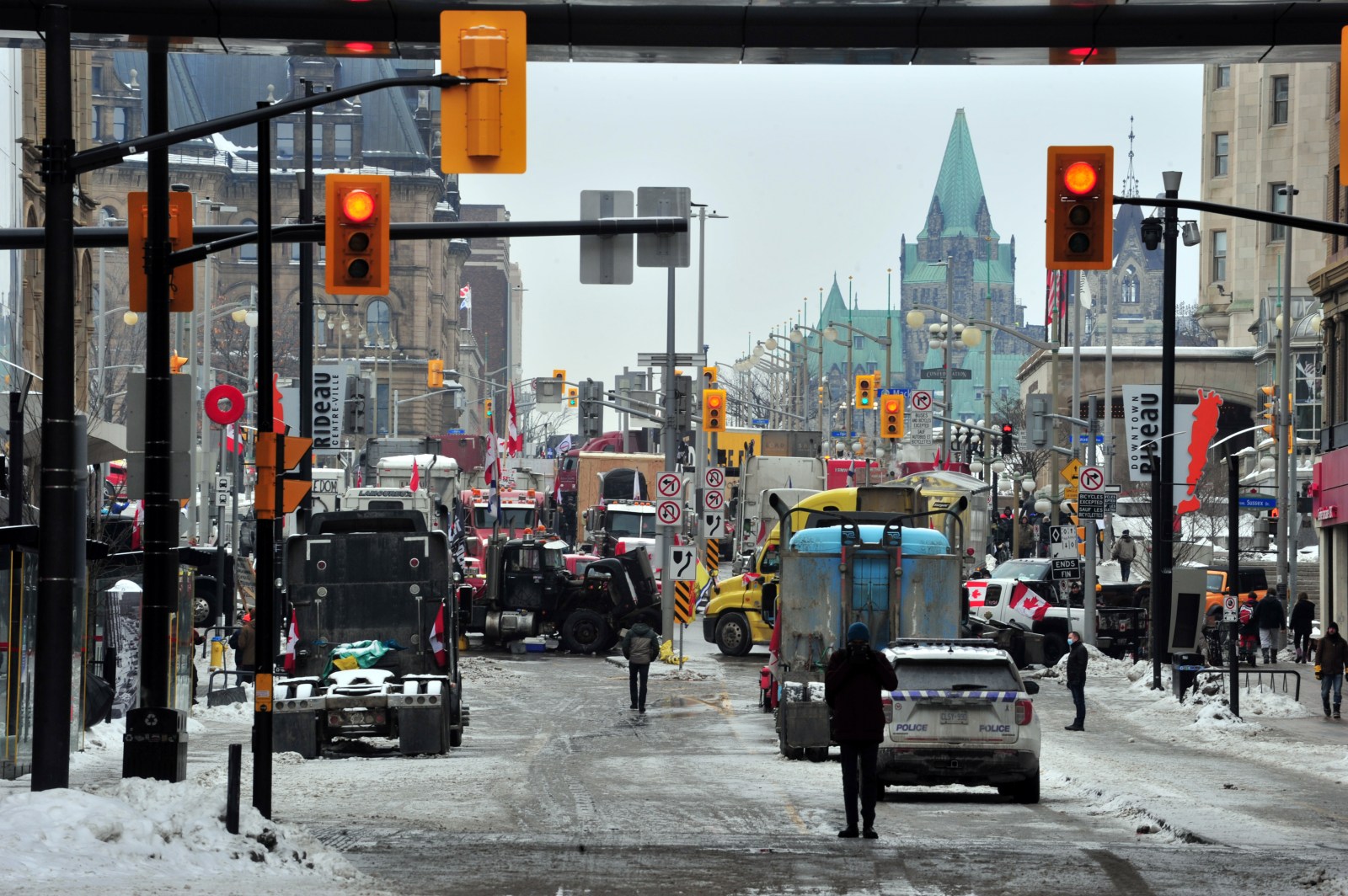 epaselect epa09739416 A view of parked trucks as truckers continue to protest the vaccine mandates in in downtown Ottawa, Ontario, Canada, 08 February 2022. Since 29 January 2022, truckers are protesting against the mandate by the Canadian government that truckers be vaccinated against COVID-19 to return to Canada, and was joined by other opponents of the Canadian Prime Minister. A state of emergency was declared in the city of Ottawa on 06 Febraury 2022 and policemen from Ottawa city, Ontario, and the Federal Royal Canadian Mounted Police (RCMP) are deployed. EPA-EFE/Kadri Mohamed

Feb 9 (Reuters) - Canadian authorities are scrambling to find ways to end the 12-day-long occupation of the national capital's downtown, hoping a combination of criminal charges, traffic tickets and the prospect of losing access to fuel will end the blockades.

The number of protesters in Ottawa against public health measures to fight COVID-19 is dropping, police say, in the face of tougher policing and a 10-day injunction to silence honking – something residents say kept them up at night with incessant noise.

But many of the remaining demonstrators in Ottawa were highly “determined and volatile,” deputy police chief Steve Bell said on Tuesday.

Touted at first as a “Freedom Convoy” opposing a vaccinate-or-quarantine mandate for cross-border truckers mirrored by the U.S. government, the protest is about much more. Demonstrators have aired a litany of grievances encompassing COVID-19 health measures, a carbon tax and other legislation.

The protests have spread to other cities, and late Monday demonstrators blocked the Ambassador Bridge linking Canada and the United States, one of the busiest border crossings on the continent, for nearly a full day.

Protesters say they are peaceful but some waved Confederate Flags and Swastikas in the occupation’s early days. Some Ottawa residents have said they were attacked and harassed. Criminal investigations are under way into, among other things, an attempted arson at a downtown apartment building.

Police have arrested 23 people and issued more than 1,300 tickets.

Police came under fire for their initially permissive attitude toward the blockade but began trying to take back control Sunday night with the seizure of thousands of liters of fuel and the removal of an oil tanker truck.

They have received additional officers from the Royal Canadian Mounted Police, the Ontario Provincial Police and others. On Tuesday, police said more reinforcements were needed – both officers and people with legal expertise in insurance and licensing, suggesting intentions to pursue enforcement through commercial vehicle licences.

Canadians have largely followed government’s health measures, with nearly 79% of the eligible population inoculated with two doses of a COVID-19 vaccine. A recent poll found 62% of Canadians surveyed oppose the “Freedom Convoy”.

Some provinces, including the two most populous provinces of Ontario and Quebec, have started lifting their COVID-19 restrictions that were put in place to combat the highly transmissible Omicron variant that emerged late last year.

(Reporting by Ismail Shakil in Bengaluru and Anna Mehler Paperny in Ottawa. Editing by Lincoln Feast.)