While politicians prate at length, we the people of South Africa are making a difference 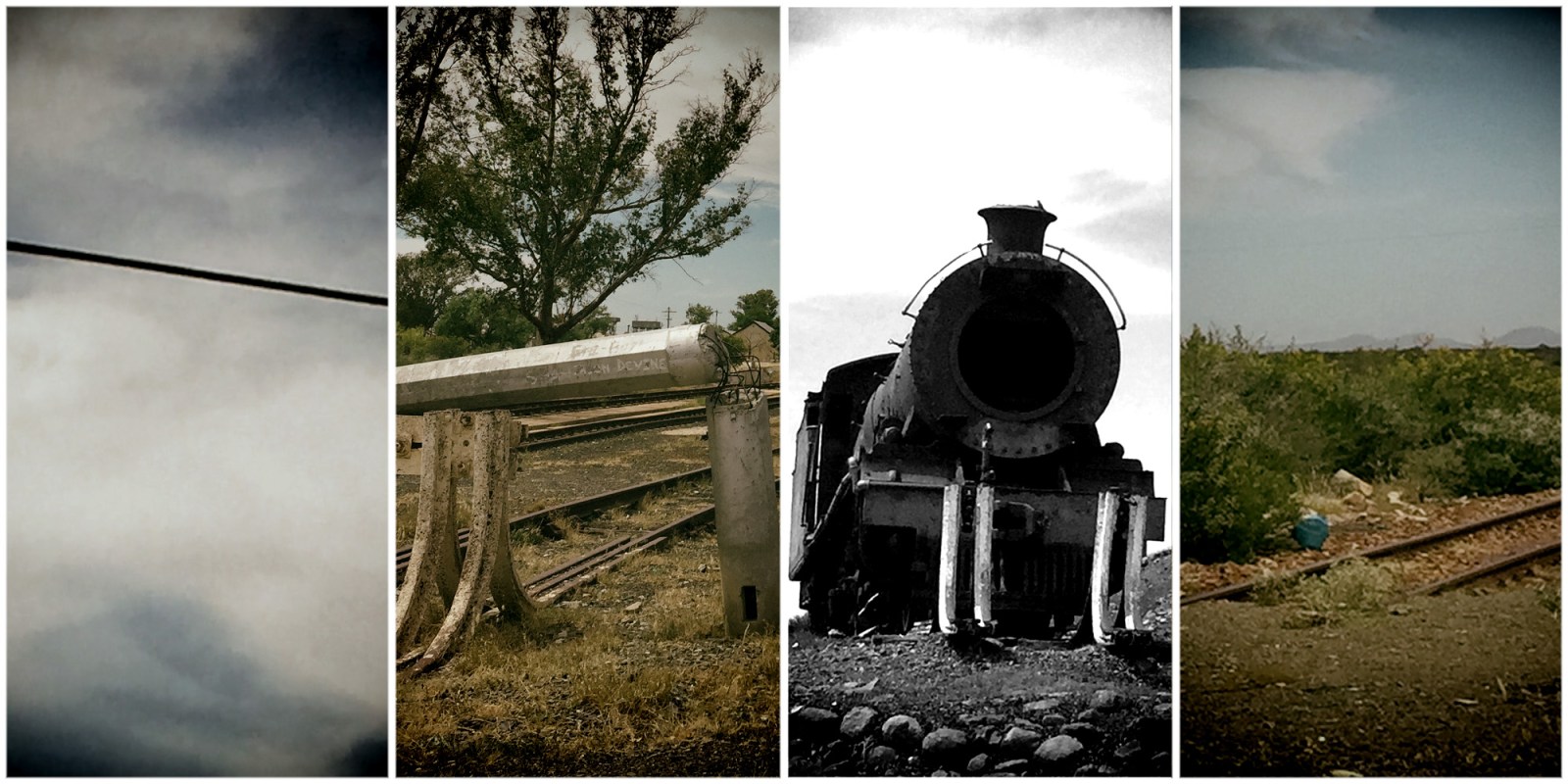 Scenes from Klipplaat in the Eastern Cape. (Photos: Marianne Merten)

South Africans are making lives for themselves to the best of their ability — even if that’s leveraging a R350 grant to make it stretch further than the most flexible piece of Lycra.

The crudely welded “Klipplaat Diesel Depot 1970” sign is just about the only reminder of what once was key to this dorpie — the Cape Town-Gqeberha railway line with its junction to Graaff-Reinet, the backbone of the local merino and angora economies.

Today the railway tracks are broken — blocked on one side of the main drag, abandoned to weeds on the other. A rusting locomotive on a gravel bed overlooks the only obvious economic activity: a petrol station. It’s on the main road just past the pristine police station, with a nearby board proclaiming: “Gift of the Givers water project”.

Klipplaat’s fate is little different from, say, Le Roux along the back roads of the Western Cape hinterland, where buildings have collapsed into themselves, or pretty much anywhere else along the line, for that matter. As hundreds of kilometres of railway tracks have fallen into disrepair, communities fall apart, hastening the disintegration of the economic and social fabric.

Rail infrastructure should have been central to economic activity. For years the politicians and officialdom proclaimed the mantra, “From roads to rail” to protect deteriorating tar roads from further damage wrought by juggernauts moving anything from food and timber to diesel and gas across the country, but also to boost volumes and cost efficiencies.

If anything has become of this policy proclamation, it’s not easily visible. Certainly not in Klipplaat. Or at Willowmore, where some 40km outside the town the tarred R329 becomes a strip of concrete the width of a single lane. Road signs warn that vehicles must yield to oncoming traffic — and everyone slows down and drives half on gravel and half on the concrete strip, from sedans to bakkies to huge trucks coming in both directions.

Precarious existences are driven home by social grants, some 18 million of which are paid every month in South Africa. A further nine million R350 Covid-19 Social Relief of Distress grants are being paid to those without any other support, according to National Treasury.

Grant payout days underscore the centrality of such social support, when afterwards families buy foodstuff and other goods for the month ahead. It’s glaring in the dorpies, perhaps a little less so elsewhere.

Grant days generate a range of interconnected activity, not least of which is transport — to and from the grant queues and to and from shops to stock up. And that vital niche economic activity, rather than any philanthropic feelings, was central to why taxi drivers blocked looters’ access to malls in the July 2021 violence in KwaZulu-Natal and Gauteng.

Social grants keep starvation from the door. But in the absence of the much talked about — but yet to manifest — structural and policy reforms for job creation, quality education and training, desperate survivalism is the order of the day.

Livelihoods — always precarious in a country where grants, remittances and the informal, often survivalist, economy dominate — have become even more uncertain in the Covid-19 pandemic. South Africa’s National State of Disaster, headed toward its second anniversary on 15 March, has extracted a steep cost.

Some two million jobs have been lost, pushing up joblessness to 46.4% on the broad definition that includes those too disheartened to continue looking for jobs. And while company revenues seem up on what had been expected — the SA Revenue Service is reported to be collecting more than anticipated — overall economic growth has been revised down to 4.8%, from 5.2% in 2021 and is estimated at 1.7% for 2022.

Inflation in December 2021 hit 5.9% and rising petrol and food prices are putting people under even greater pressure. Eskom’s proposed 20.5% tariff increase — never mind the municipal mark-ups that will follow — will rip holes in almost empty pockets.

In a concrete manifestation of this, masks and Covid-19 mandated physical distancing have disappeared — unless access is needed to stores, malls and government offices. Few people talk politics. A completely different matter is the rapidly increasing cost of living, which just about everyone is worried about, and rain.

Outside the bubble, politicians keep with pretty PR words, protocols, blue lights and bodyguards while South Africans have turned to rely on themselves.

And they have stepped up.

Not just in the traditional stokvels, but also community action networks (CANs) that provided food and other support during the harshest of Covid-19 lockdown restrictions and beyond.

Or initiatives like the Tuisnywerheid in Oudtshoorn, a cooperative that leveraged its numbers to secure a shopfront in the main road with a lot of foot traffic. If a small-scale farmer near that central Karoo town needs beans to be sold, those packets are on the shelves — or in the fridge, given the heat — alongside the Hertzoggies (jam tartlets) and wortelkoek (carrot cake), each labelled with the number of the cooperative member who produced them.

And South Africans deciding to see their own country were the ones who brought relief to the struggling tourism, leisure and hospitality sector this 2021/22 festive season.

While Cape Town generated some R800-million from its festive season visitors, according to the local council officials, quantifying the festive season tourism leg-up elsewhere is a little slow. But speak to any owner of a B&B, guesthouse or restaurant that kept themselves going for the past 20 months, and they are thankful South Africans hit the road.

That tourism boost happened not necessarily because of anything anyone in authority did, but because South Africans decided to travel, particularly people from Gauteng, the Free State and Mpumalanga — if car and trailer registration plates are anything to go by.

“People decided to travel, particularly black middle classes, to see the country. It was good to see,” says one long-time resident of Oudtshoorn on how the festive season’s holidaymakers sustained the town after two lean years.

Bubbling underneath is another trend — young people returning from cities. That brought a new dynamic and energy to the town, according to the resident. “Young people bring new ideas. And all of them socialise together, regardless of race. It’s a whole new vibe.”

For some, a return to where they grew up is based on a decision to make a difference.

Having grown up on a farm at De Rust, in 2021 Andries Schoeman decided to return to open a restaurant and lifestyle venue. When a previously Franschhoek-based chef came on board it was all systems go, and after a four-month renovation of a building that included dentists’ rooms, Pluim opened in December.

“We wanted to create options, to also attract different visitors to the town. This will then create jobs and other spin-offs,” says Schoeman about the venture with his partner, Jan Berand Badenhorst.

A local accommodation owner welcomed the new addition, saying: “It’s what we need.”

Now that the May 2022 Meiringspoort Challenge for cyclists and trail runners is confirmed — and another race possibly resuming later in 2022 — hopes for more visitors to boost the tourism income and jobs in De Rust can turn to reality.

The picture changes somewhat on the Garden Route, which has been able to attract and retain money.

The regional hub of George is thriving and so, it seems, is Mossel Bay whose business community is reaching into the hinterland; word in Oudtshoorn was that such a move was why the local biltong factory had closed for the first time over the festive season, causing a shortage of ostrich biltong and droëwors. At Hermanus, a sprawling shopping mall alongside a more industrial area abutting the port signals not only economic activity but also wealth.

Property is booming. At least some of this is linked to what’s described as “the flight” from broken metros and their potholed roads, ruptured water pipes and such. The middle classes are relocating now that remote working is acceptable and doable. Similar dynamics play out in dorpies like Darling where those with GP number plates combine a spot of holidays with property searches, as the local grapevine has it.

But elsewhere, rusting railway bridges and the shacks surrounding the church in places like De Hoop just off the road to Calitzdorp mark infrastructure decline — and also the social and economic disintegration thrown into sharp relief by South Africa’s, at best, galumphing economy.

The point is that South Africans are making lives for themselves to the best of their ability — even if that’s leveraging a R350 grant to make it stretch further than the most flexible piece of Lycra.

When President Cyril Ramaphosa delivers the State of the Nation Address on Thursday, he’ll talk about his administration’s achievements, and about government policy programmes and priorities. But talking about economic recovery, no matter how eloquently, doesn’t make it so.

The real state of the nation lies elsewhere — with ordinary South Africans, who just get on with it no matter what. DM