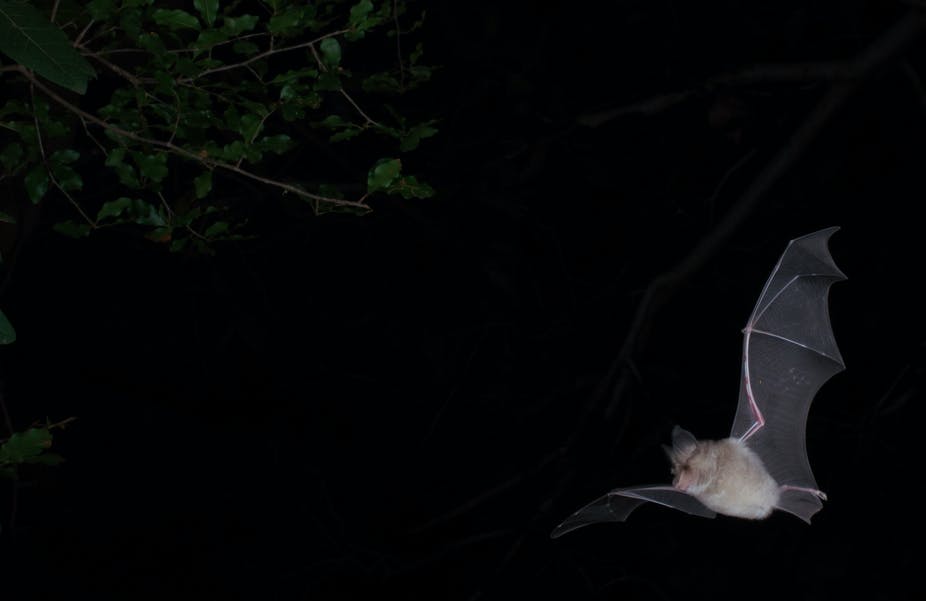 Caves are overlooked but essential parts of the natural world. Many animals use caves for shelter and for raising their young – bats among them. Caves are often home to multiple bat species. Bats may also use different caves for specific reasons; some travel to particular selected caves, known as maternity caves, just to have their pups. This means that large populations of bats rely on a small number of caves for survival.

The landscape immediately surrounding a cave is important to bats too. The animals usually hunt and find water to drink within a 5km radius of their home caves. So, any destruction of a cave and its surrounds will have major consequences for local bat populations. That, in turn, is bad news for ecosystems. Bats are critical components of a healthy environment: fruit-eating bats pollinate flowers and spread seeds, while insect-eating bats control insect populations like flies and mosquitoes.

The destruction of natural habitats brings humans into closer contact with wild animals, such as bats, which may lead to future outbreaks of zoonotic diseases – those of animal origin. When natural habitats are destroyed, animals like bats need to find new places to live; those that can adapt will likely move into buildings. Others may simply not survive.

Many caves around the world are threatened by human activities – vandalism, pollution and illegal mining of non-renewable sediment deposits such as limestone. They’re also at risk from land-cover changes such as increasing urban settlements, expanding agriculture and extensive groundwater extraction.

Despite this, most are not formally protected under conservation laws. In South Africa, for instance, much of the current focus on caves falls primarily on their significance as fossil sites; no formal cave conservation plans currently exist.

My colleagues and I from the Centre for Viral Zoonoses in collaboration with the Mammal Research Institute at the University of Pretoria investigated the state of the landscape around 47 important bat caves in South Africa. Our findings were fairly dire. Between 2014 and 2018, tree land cover decreased by 4.26% around all the caves, while urban and agricultural land cover increased. The distances between urban areas and caves also decreased in this period; the average distance for all caves to the nearest urban settlements was 4.15km in 2018, an average decrease of 0.17 km from 2014. This means there’s less distance between humans and bats.

Cave-specific conservation and protection actions are essential to protect cave habitats for the continued survival of bats and, ultimately, the wellbeing of humans.

South Africa is home to more than 60 bat species, at least 18% of which rely on caves for their survival.

Two species, the Natal long-fingered bat and the Egyptian Rousette bat are probably the most numerous and widespread throughout the country. These species often live in the same caves; both are earmarked for long-term surveillance by our research group because they are hosts for a variety of viruses.

We used a cave database that I compiled for my PhD for the two species. This gave us 47 locations of caves throughout the country. Using two publicly available land-use change maps from 2014 and 2018, obtained from the Department of Environmental Affairs, we investigated the degree of land cover change for eight different land-cover classes – trees, other vegetation, urban settlements, agriculture, bare ground, plantations and wetlands – within a 5km radius of all 47 caves. We also compared the distances between caves and the nearest urban settlements between the two dates.

The diminishing number of trees in some areas can be explained by the fact that trees are a vital component of livelihoods throughout South Africa; they are often harvested for fuelwood and medicine. Unfortunately, wood harvesting rates are unsustainable: most trees were lost within 1.5km of human settlements and it is fair to assume that people will keep venturing deeper into wooded, natural areas, bringing them ever closer to wild places like caves.

Trees are important sources of food for bats, either by directly providing fruit or by providing places for insects to hide and feed. Bats also use trees and tree rows to navigate when they fly. Therefore, the loss of trees leads to habitat fragmentation and a reduction of bat foraging activity.

Decreasing distances between caves and urban settlements, along with the lack of formal protection of caves, also means that more people will encounter and enter caves. This may leave caves increasingly vulnerable to disturbance and vandalism – and most people probably don’t know that it is illegal to enter, damage or vandalise caves in South Africa. Only people who are granted specific permits by a relevant government department are legally allowed to enter caves.

Even if a cave isn’t damaged during a person’s visit, there could be other, less immediately obvious consequences. Foot traffic from human visitors can trample floor-dwelling cave wildlife. Frequent disturbance may also cause bats to abandon their cave homes. More seriously, people entering caves may unknowingly introduce foreign and deadly microscopic particles to cave inhabitants through their clothes and shoes.

Protecting caves requires a multi-faceted approach. Scientists must share findings with the public and government agencies, to aid in the development of formal conservation plans and protective measures. Important caves and their surrounding habitats should be designated as protected areas. Tree-harvesting should be regulated in these areas.

Education, outreach initiatives and community involvement are just as important. Many people might be unaware of the importance of caves and their bat inhabitants to our ecosystems. Together, we can all help to protect bats. DM/ML

Mariëtte Pretorius is a Postdoctoral Researcher at the Center for Viral Zoonoses and Mammal Research Institute, University of Pretoria.