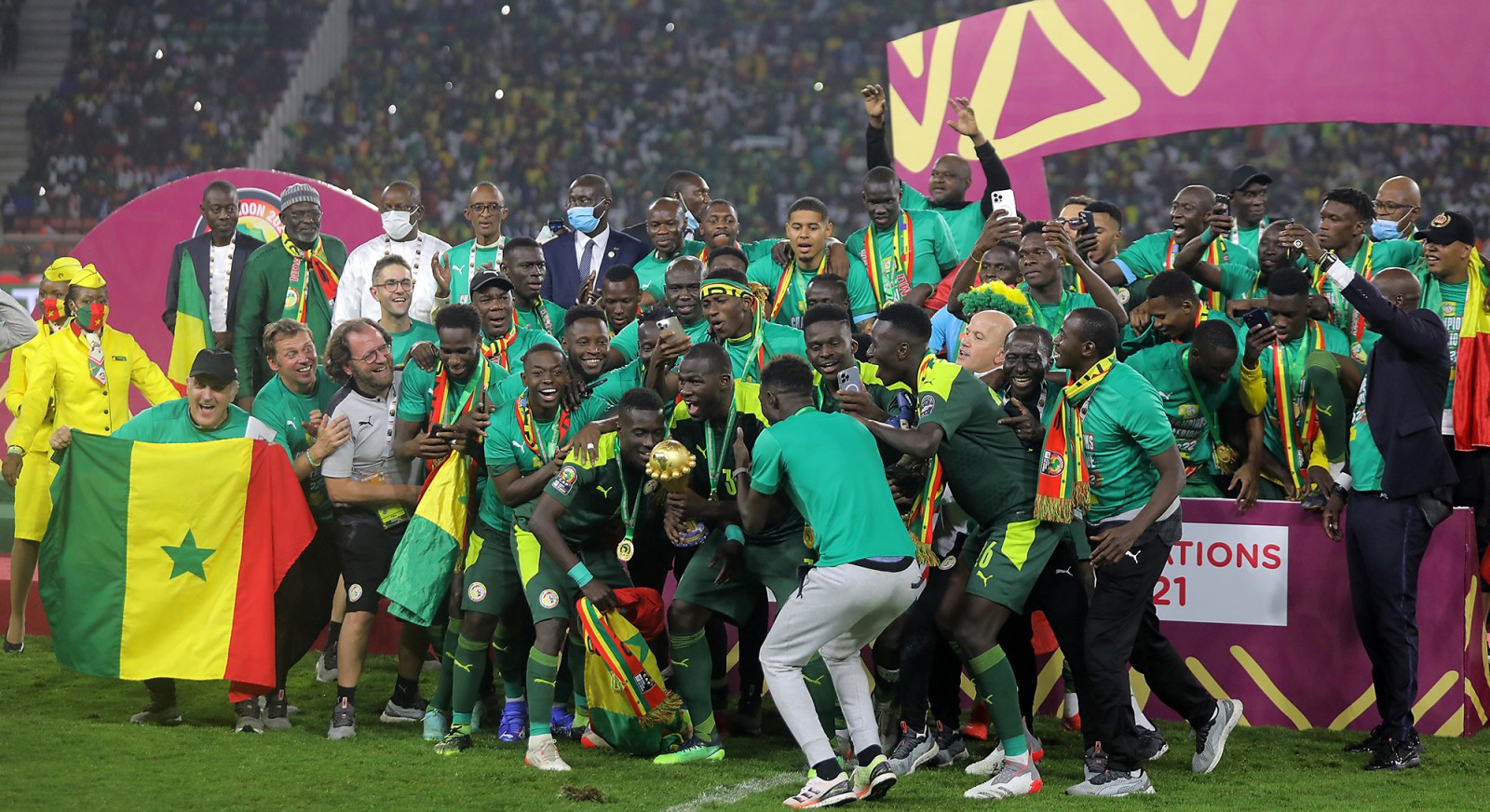 Kalidou Koulibaly (C) of Senegal and teammates celebrate with the trophy after the 2021 Africa Cup of Nations final between Senegal and Egypt in Yaounde, Cameroon, 6 February 2022. (Photo: EPA-EFE/FOOTOGRAFIIA)

Sadio Mane and his Senegalese teammates etched themselves into football folklore as they won the country’s first-ever major trophy during a memorable final against Egypt. They beat the record African champions 4-2 on penalties, following a goalless 120 minutes.

One way or another, history was going to be made as Senegal clashed with Egypt in the final of the 33rd edition of the Africa Cup of Nations (Afcon).

Either the Pharaohs were going clinch a record-extending eighth African crown, or the Senegalese would be victorious and lay claim to the title of African champions for the first time in their storied history.

In the end, it was Senegal — via a 4-2 victory in the penalty shootout — who won their first-ever Afcon title in what was their 16th participation in the tournament. In the process, they became the 15th different country to win the continental competition — joining the likes of Cameroon, Ghana, South Africa and Ivory Coast.

The narrative leading up to the match had been dominated by the clash between two of Africa’s best players at the moment — Mohamed Salah and Sadio Mane. That they are teammates at club level, terrorising defenders for a living in the red of Liverpool in England, made the coming together even more intriguing.

It was Salah who landed the first blow on his good mate. The Lions of Teranga had a brilliant opportunity to settle early nerves and take command of the match as Mohamed Abdelmonem’s late, reckless challenge brought down left-back Saliou Ciss.

South African referee Victor Gomes pointed to the spot. While Mane prepared to dispatch the spot-kick, Salah appeared to have some advice for his compatriot Gabaski in goal. Mane’s Liverpool teammate seemed to be telling Gabaski which side the Senegalese superstar would shoot. He shot, Gabaski dove and saved — advantage Salah.

Gabaski would continue to thwart the Senegalese for the whole 120 minutes, the fourth extra-time in a row that Egypt had played in the competition. It was Mane though who had the last laugh over his Liverpool teammate and the gallant Gabaski.

The fleet-footed forward netted the winning penalty, producing a cheer so loud from all of Senegal, that it brought the pyramids and the great sphinx of Giza crashing to the desert floor.

Senegal coach Aliou Cissé was the captain of the side in 2002 when they lost in their first-ever Afcon final on penalties to Cameroon after a goalless draw. At that time, the former Paris Saint-Germain player also missed his kick in the shootout.

Cisse suffered double heartbreak when now as a coach, he led his country to their second Afcon final in Egypt 2019. There they were defeated by the Desert Foxes of Algeria.

Three years after that heartache, Cissé’s destiny to Afcon glory is complete and he has secured his legacy as one of the most iconic Senegalese of all time.

“I am an African champion. It was long, it was difficult, sometimes complicated, but we never gave up,” said Cissé

“I dedicate this victory to the Senegalese people. For years, we have been chasing this cup. We will be able to put a star on our jersey. Winning the Africa Cup of Nations in Cameroon has a special meaning. Winning against the most successful team in Africa is another symbol,” he added.

In spite of Bafana Bafana’s absence at the continental competition, South Africans still had something to cheer for as referee Victor Gomes also made his own history. The no-nonsense Gomes became the first South African to take charge of an Afcon final.

It was Gomes though who was the most lauded after a controlled and fair display with the whistle. This included a humorous exchange with Salah where the referee offered the remonstrating Egyptian captain his whistle and cards; appearing to ask him if he’d like to take over as the man in the middle.

Though overshadowed by the death of eight supporters during a crush as the hosts Cameroon clashed with Comoros in the round of 16, as well being watered down by regular Covid-19 cases in team camps during the early stages, this edition of Afcon will go down as a memorable one. This is certainly true for the people of Senegal. DM