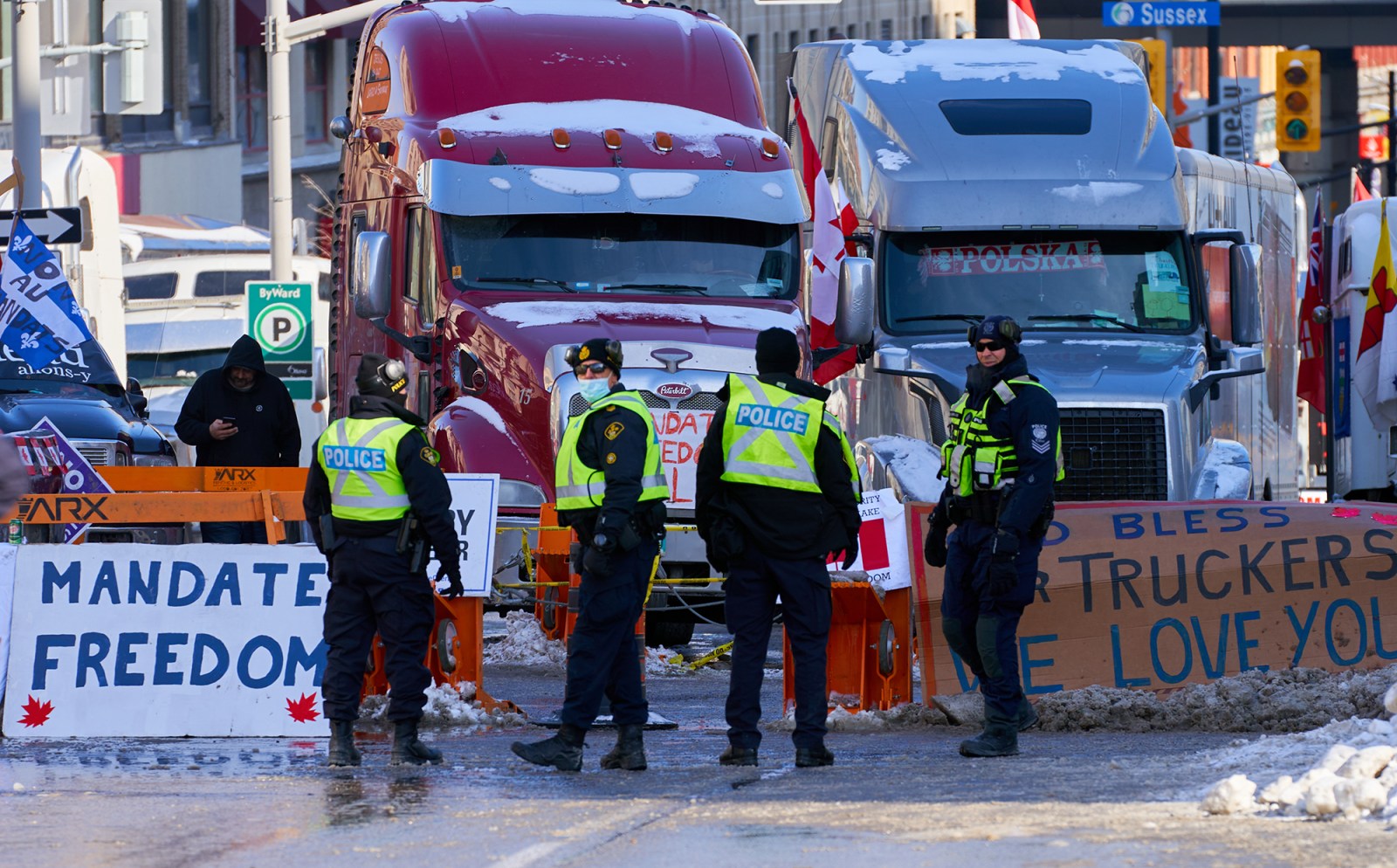 Policemen stand near the truckers sit-in, after the mayor of Ottawa has declared a state of emergency in the Canadian capital after a 10-day-long protest by truck drivers over Covid-19 restrictions that has gridlocked its city center, in Ottawa, Canada, 07 February 2022. Truckers protested against the mandate by the Canadian government that truckers be vaccinated to return to Canada, and was joined by other opponents of the Canadian Prime Minister. Policemen from Ottawa city, Ontario, and the Federal Royal Canadian Mounted Police (RCMP) are deployed. EPA-EFE/ANDRE PICHETTE

Canada’s capital city, Ottawa, remained under a state of emergency as police tried to rein in protests against vaccine mandates and Covid-19 restrictions.

More people are back in City of London offices than at any time since December, when the government told people to work from home to slow the spread of Omicron.

Australia will allow double-vaccinated visa holders to enter the country from 21 February, ending about two years of strict international border controls. HSBC and other banks closed retail branches in Hong Kong as the Covid outbreak there grew. 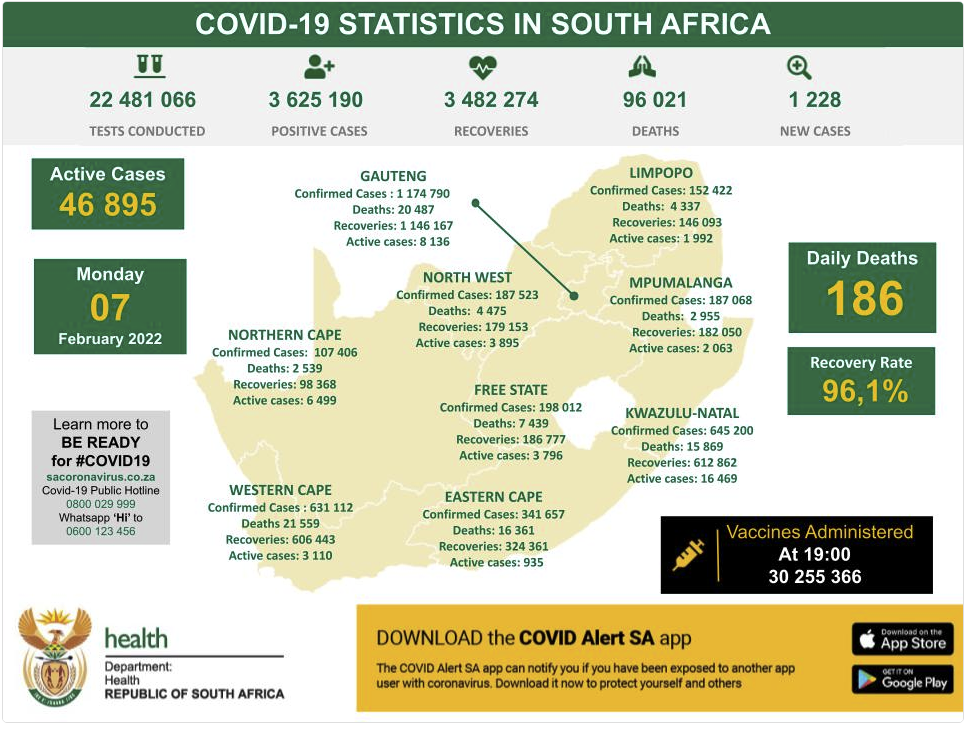 Mandatory use of masks outdoors in Italy will end on 11 February, Health Undersecretary Andrea Costa told Ansa newswire on Monday. “This is a sign of hope for all Italians,” he said. According to the Italian government, 91.2% of citizens over 12 have received at least one dose of a vaccine.

We are lifting DE’s statewide mask mandate for indoor public settings at 8am on Friday, Feb 11.

We’re in a much better place than we were several weeks ago. pic.twitter.com/rofUXN2hzW

New Jersey school districts will be allowed to drop a mask mandate next month, Governor Phil Murphy is expected to announce Monday. The move will be effective on 7 March, with flexibility for districts to decide on their own requirements.

School mask mandates have become a hot-button issue across the US. Murphy made them a requirement last September when in-person lessons restarted statewide for the first time since the pandemic’s onset.

More people are back in City of London offices than at any time since December, when the government told people to work from home to slow the spread of Omicron.

Almost 70% of staff were back in the workplace in the financial district on Thursday, according to data compiled by Google.

In mid-December, the government advised employees to work from home if possible, and required people to wear masks in shops and on public transport. The restrictions were eased in January as cases began to fall.

Major retail banks are changing operating hours and closing local branches in Hong Kong, according to The Standard, in response to a rapidly growing Covid outbreak that has the city reeling.

The Czech Republic recorded 9,060 new coronavirus cases in 24 hours on Sunday, the lowest in about three weeks. The government plans to lift some measures this week, including a ban on non-vaccinated people using restaurants and some services. The mandatory bi-weekly testing at schools and workplaces will also be scrapped on 18 February.

Hong Kong Chief Executive Carrie Lam is set to discuss further restrictions at an Executive Council meeting on Tuesday after a record of 614 new coronavirus infections were reported, with cases doubling every three days.

Potential measures include limiting numbers at restaurants and placing restrictions on religious venues, according to local media reports. The government may also lower the public gathering limit to two people in a return to one of the strictest anti-virus measures.

Germany’s health minister expects Covid restrictions to be eased “long before Easter”. A gradual relaxation may be discussed at a summit between the state and federal governments on 16 February, Karl Lauterbach said on Bild TV late on Sunday.

The “spectre” of Covid might subside by next autumn, but only if a vaccination mandate was introduced, he said. Germany’s outbreak is at record levels, with more than 1,400 infections per 100,000 people over the past seven days.

Indonesia has tightened mobility restrictions in Jakarta, Bandung and Bali to the second-highest level as Omicron cases continue to spread rapidly. The restrictions, which include limiting capacity at public places and reducing operating hours for cafes and restaurants, will be implemented for one week.

Australia to reopen for visa holders

The announcement is the final step in a gradual unwinding of international restrictions, which kicked off in November. Still, Western Australia remains closed to the rest of the country, after delaying its domestic border reopening.

The decision to allow vaccinated international arrivals comes as Covid infections, hospitalisations and intensive care admissions trend down in most parts of the country.

A southwestern Chinese border city was locked down after mass testing identified nearly 100 people with Covid, yet another outbreak that’s extending the country’s protracted battle to bring infections back to zero.

A total of 98 people tested positive on Sunday in Baise, a city of 3.6 million people next to Vietnam. Travel was banned within the city and to the rest of China and all residents were asked to stay at home.

China has no plans to adjust its policy for the time being, Wu Zunyou, chief epidemiologist with the Chinese Center for Disease Control and Prevention, told the Global Times.

Protesters cause chaos in Australian capital

A group of anti-vaccination demonstrators and conspiracy theorists blocked roads and targeted businesses in the Australian capital of Canberra ahead of the return of federal parliament on Tuesday.

Hundreds of cars and trucks displaying Australian flags, military insignia and campaign banners for former US President Donald Trump descended on the city over the past week to call for the end to vaccination requirements in businesses and places of employment.

South Korea’s daily cases could increase to 130,000-170,000 at the end of February with the surge of the Omicron variant, the Korea Disease Control and Prevention Agency said.

President Moon Jae-in said it’s a serious situation as it’s unclear when the wave will peak.

Canada’s capital declared a state of emergency on Sunday as police struggled to rein in ongoing protests against vaccine mandates.

The demonstrations began in reaction to Canadian and US laws that went into effect in January, requiring truckers crossing the border to be fully vaccinated. They have since transformed into a rally against Covid restrictions more broadly.

Ottawa Mayor Jim Watson said that they pose a “serious danger and threat to the safety and security of residents”. DM/MC