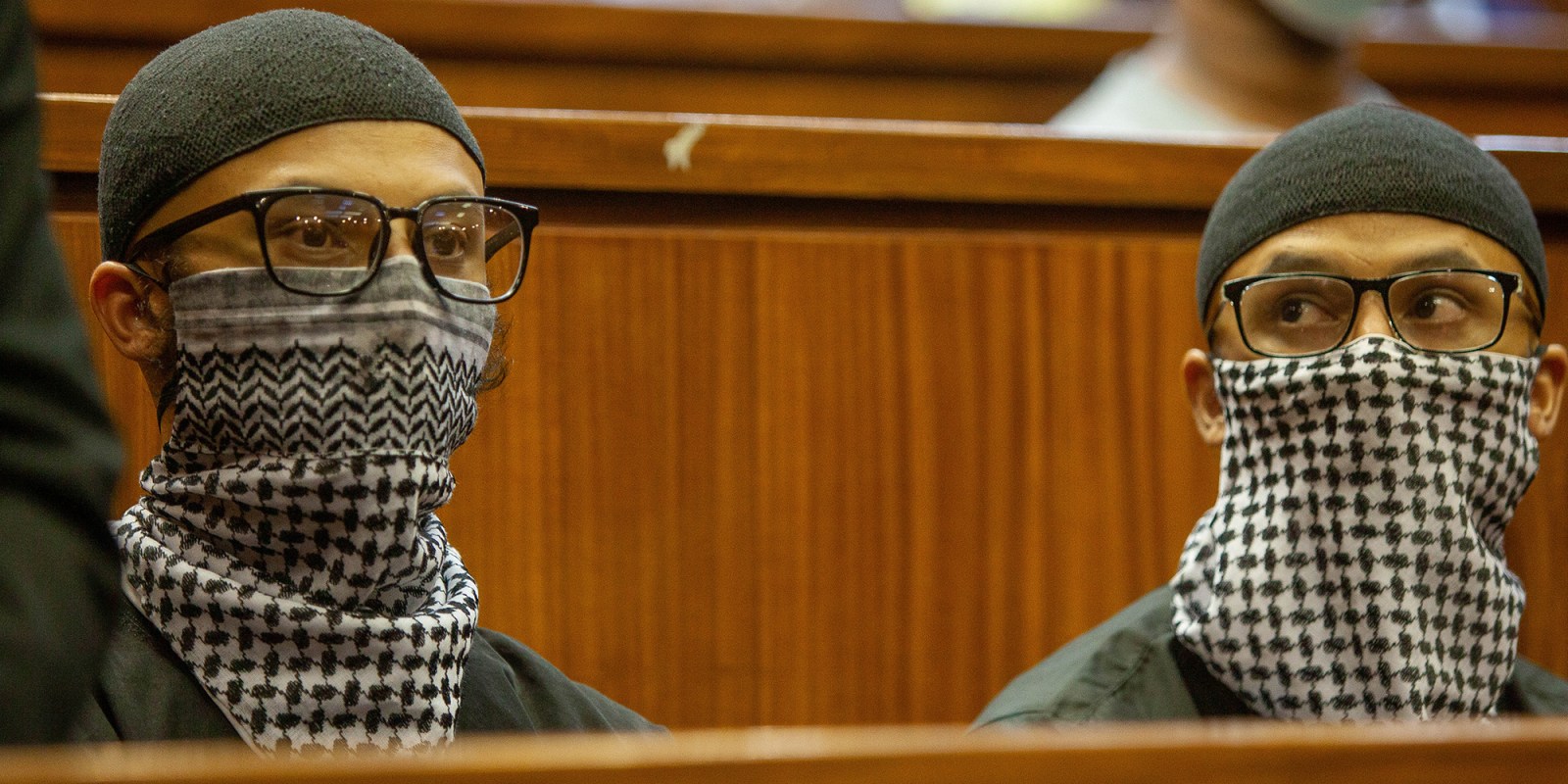 Thulsie twins Brandon-Lee and Tony-Lee Thulsie) appear at Johannesburg high court on January 17, 2022 in Johannesburg, South Africa. It is reported that the twins were arrested in 2016 during raids in Gauteng, with the authorities alleging they were linked to Islamic State (ISIS). (Photo: Gallo Images/Papi Morake)

A plea bargain ends the tortuous case in which the Johannesburg brothers were charged for conspiring with Islamic State in Iraq and the Levant.

Under the terms of a plea bargain with the prosecutor, Tony-Lee Thulsie was sentenced to 11 years in prison and his brother Brandon-Lee received an eight-year prison sentence. They have already been in jail awaiting trial since July 2016, so Tony-Lee will effectively serve about five years and Brandon-Lee about two.

The convictions of the two Johannesburg brothers in the Johannesburg High Court were the first for international terrorism under the 2004 Protection of Constitutional Democracy Against Terrorist and Related Activities Act (Pocdatara) — known in shorthand as the terrorism act.  Previous convictions under the act have been against local right-wingers.

Under the plea bargain, both accused pleaded guilty to attempting to travel to Syria twice in 2015 to join Islamic State in Iraq and the Levant (ISIL), to conduct terrorist activities. Both times authorities prevented them leaving, suspecting their true intent. The brothers also pleaded guilty to downloading ISIL literature from the internet, including instructions on how to acquire weapons and make bombs.

In addition, Tony-Lee pleaded guilty to the charge of conspiracy to commit a terrorist attack in South Africa. The state alleged he had been in regular contact with a person outside South Africa with strong links to ISIL. Tony-Lee requested instructions on how to make an explosive device and indicated he had targets in mind and said intended also to blow himself up in the attack.

The state’s evidence indicated he intended to attack US, UK, Russian or French diplomats and embassies in Pretoria and Jewish interests.

In exchange for their guilty pleas on these charges, the state withdrew several other charges against the Thulsies, such as financing terrorist activities and soliciting support for a terrorist organization, i.e. ISIL.

The guilty pleas, convictions and sentencing on Monday bring to a close a long and tortured legal process that was characterised by many delays and growing frustration by the court.

The delays included an unsuccessful attempt by the Thulsies to seek bail as well as an ongoing effort by their defence team to have the case dismissed or referred back from the high court to the Regional Court where the case had started in 2016.

The defence claimed the case had been wrongfully transferred to the high court. Last year Johannesburg high court judge Ratha Mokgoatlheng dismissed their application and then also denied them leave to appeal his decision to the Supreme Court of Appeal (SCA)

The defence applied directly to the SCA but it also refused to hear the case. The defence persisted and told the high court it intended to approach the SCA Judge President directly.

The judges involved in the case grew increasingly irritable at the delays. Last October when state prosecutor, advocate Adele Barnard, informed Judge Ramarumo Monama that the defence had requested a postponement of the start of the trial to March 2022, he refused, saying such an order would be “preposterous.”

“I am not inclined to give any postponement until next year. That is unacceptable. What I am trying to alert or revive is that we are not only dealing with the niceties of the law. We are dealing with the essence of the survival of the rule of law, if these people can be kept in custody for that long. So, for that reason, I was not going to entertain any application for this matter to be postponed to next year. It’s preposterous to make such an order,” said the judge.

And at the last hearing of the case, on January 17 and 18 this year, judge Mokgoatlheng also criticised all the delays and said the case must proceed on February 7. The Thulsies’ advocate, Abu Bakr Omar, said the defence was not available on that day and that he was also awaiting additional information from the prosecution. But the judge insisted.

He also instructed Barnard to hand over all her evidence to the defence, even confidential files which she had withheld until then, as she was entitled to do, for security reasons. She agreed to hand over all the evidence on instruction from the court.

Seeing all the evidence that the state had against them may have convinced the Thulsies and their lawyers to settle out of court. DM