Masking may ease in US schools; South Africa registers... 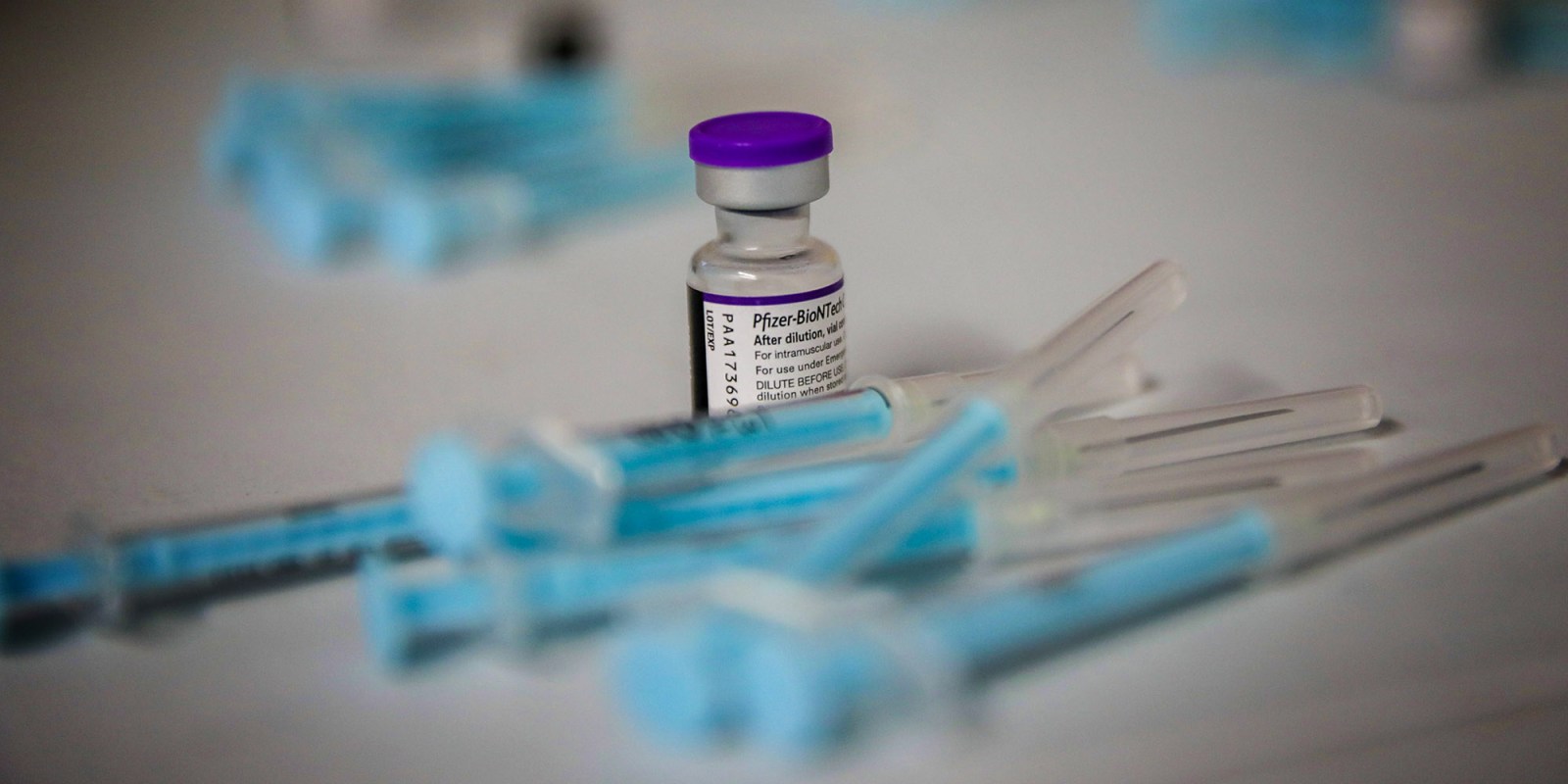 A vial and prepared doses of the Pfizer-BioNTech Covid-19 vaccine at the Grassy Park civic centre in Cape Town. (Photo: Dwayne Senior / Bloomberg via Getty Images)

More US schools are likely to begin lifting mask mandates soon as the overall risk from the omicron wave eases, said Scott Gottlieb, former commissioner of the Food and Drug Administration. But he warned, with infections still high in many parts of the US: “We’re tragically still in this fight.”

Israel reported its highest number of severe cases since the start of the pandemic. Beijing Olympics organisers reported 10 new infections among athletes and officials arriving for the Winter Games. 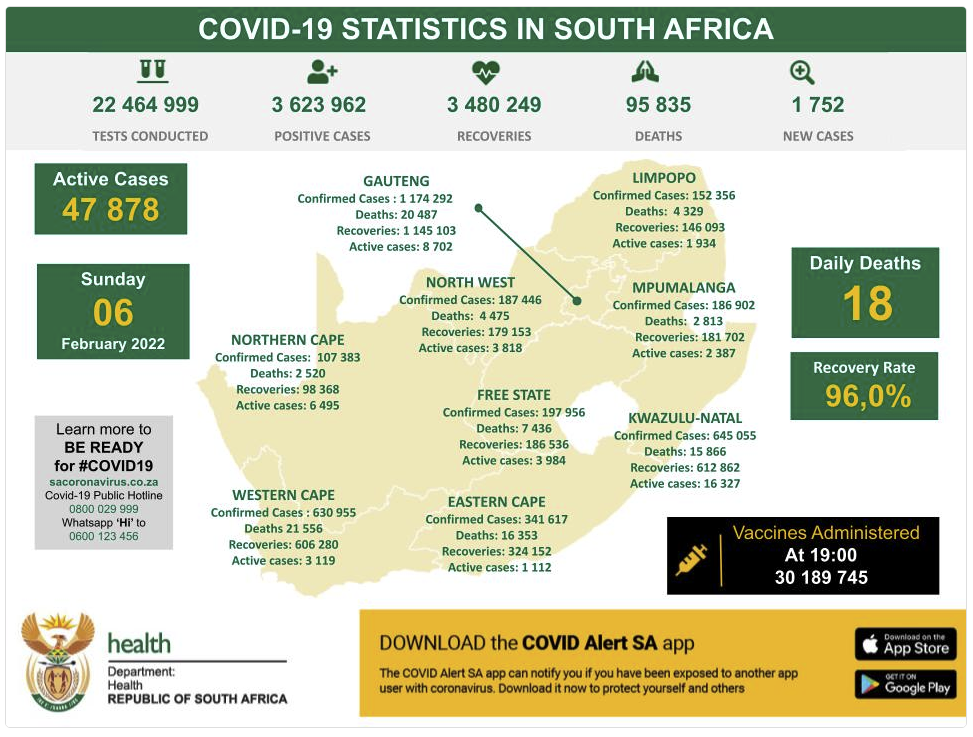 More US schools are likely to begin lifting mask mandates soon as the overall risk from the omicron wave eases, said Scott Gottlieb, former commissioner of the Food and Drug Administration.

“We can start to lean forward and take a little bit more risk and try to at least make sure that students in schools have some semblance of normalcy for this spring term,” Gottlieb, a Pfizer board member, said on CBS’s Face the Nation. “A lot of kids haven’t really known a normal school day for two years now.”

India’s central bank postponed its interest-rate review by a day as the nation and its neighbors mourn the death of celebrated singer Lata Mangeshkar after being diagnosed with Covid-19. She was 92.

The Reserve Bank of India’s monetary policy committee will now meet from 8-10 February, the authority said in a statement late on Sunday. Its decision will be announced on Thursday.

Mangeshkar, known as the “Nightingale of India,” received her home country’s highest civilian award during a career spanning more than six decades, as well as love and respect for her music from across the subcontinent. She had been hospitalised since 8 January after testing positive.

With the death of Lata Mangeshkar the subcontinent has lost one of the truly great singers the world has known. Listening to her songs has given so much pleasure to so many people all over the world.

Australia to reopen to tourists

Australia plans to open its borders to international tourists as soon as possible, a government minister said on Sunday, following a report that they will be allowed back by the end of February after a Covid-related hiatus of almost two years.

“We are getting ready to open as soon as we can,” Home Affairs Minister Karen Andrews said in an ABC TV interview. “We don’t have all the information we need to be able to take the decision, but we are very close.”

Overseas tourists could be back within two or three weeks, the Herald Sun paper reported earlier on Sunday, citing an unnamed senior government source. An announcement from the government may come as soon as Monday following a meeting of the National Security Committee, the paper said.

The UK reported another 54,095 cases on Sunday, the lowest figure since 12 December. Infections have been declining since the Omicron wave peaked in early January, with the seven-day average down 5% to 83,474. Another 75 fatalities were reported Sunday.

The country has stopped requiring those who test positive on lateral-flow devices to confirm the result with a laboratory PCR test. However, reinfections are also included as of last week.

China has no plans to adjust its zero-Covid-tolerance policy for the time being, Wu Zunyou, chief epidemiologist with the Chinese Center for Disease Control and Prevention, told the Global Times in an interview.

“We previously thought Covid-19 could be basically contained through vaccines, but now it seems that there’s no simple method to control it except with comprehensive measures, although vaccines are the most important weapon,” Wu said.

China has vaccinated 86.8% of its population with two doses, according to the Bloomberg Vaccine Tracker, but is behind other nations in booster shots. Its domestically produced vaccines do not use the mRNA technology widely used in countries with advanced booster campaigns.

An additional 87 results are still pending review, the report said. Mass testing of 207,506 people was rolled out after a person who travelled to Baise from Shenzhen tested positive on 4 February.

The city with a four-million population in the province of Guangxi had previously reported a total of 43 positive cases during the mass testing.

Malaysians urged to get boosted

“There are still one million seniors who do not have a booster dose. Please inform your loved ones to get booster dose immediately.”

Some 53% of Malaysian adults have received booster shots, according to data from the ministry.

The number of serious coronavirus cases in Israel reached 1,263 on Sunday, the highest reported since the beginning of the pandemic. Before Saturday the previous record of 1,193 severe cases was set in January 2021.

At the same time, the number of new daily infections is declining, with about 38,000 new cases on Friday, compared with 49,500 the previous Friday, and a peak of more than 85,000 at the height of the omicron wave.

Israel was one of the first countries to roll out vaccines and booster shots, offering a fourth dose to higher-risk people last month.

Hong Kong reported 342 positive Covid-19 cases on Sunday, health authorities said in a press conference, the second day in a row that the number surpassed 300.

All of the latest infections were local, with 136 listed as untraceable. Fifteen cases were detected in public housing estates in Tuen Mun and Sha Tin, where more than 7,200 residents have been tested, officials said. More than 300 preliminary positive cases were reported.

“There are invisible transmission chains in the community,” Ronald Lam, director of health, said during the press conference. He added that is impossible to project the peak of the current wave.

India has placed an order for 50 million doses of Biological E’s Covid-19 vaccine Corbevax, according to a report in The Times of India. The government has placed the order at 145 rupees ($1.94) a dose excluding taxes, and the vaccine may be used for children under 15, once regulators approve.

New coronavirus cases in the country declined for the third day, and more than 4.5 million vaccine doses were administered in the past 24 hours.

Daily cases continue to accelerate in South Korea, with 38,691 new infections reported on Sunday, driven by the Omicron variant. Still, the death rate is declining, along with the number of critical cases. There were 15 new deaths, and hospitals were treating 272 severe cases, the Korea Disease Control and Prevention Agency said.

The country’s high vaccination rate is helping to insulate people from serious infection, according to health authorities. South Korea has fully vaccinated 95.4% of those aged 60 and over and administered boosters to 86.2% of them.

Thailand reported 10,879 new infections on Sunday, the highest single-day tally in four months. There were also 20 deaths in the past 24 hours.

Earlier this week, the southeast Asian nation inaugurated a quarantine-free entry programme for inoculated tourists. Prime Minister Prayuth Chan-Ocha on Saturday has ordered Betong International Airport to be ready to accept travellers as the new gateway for tourism in the south, Health Minister Anutin Charnvirakul said.

Vietnam will buy 21.9 million doses of Pfizer Covid-19 vaccine doses for children aged five to 12, according to a post on the government’s website. Vietnam acquired more than 206 million vaccine doses between March 2021 and 4 January, of which more than 182,000,000 have been administered, the post said, citing the Ministry of Health. DM/MC