Cocaine trafficking believed to be behind Guinea-Bissau ‘coup attempt’ 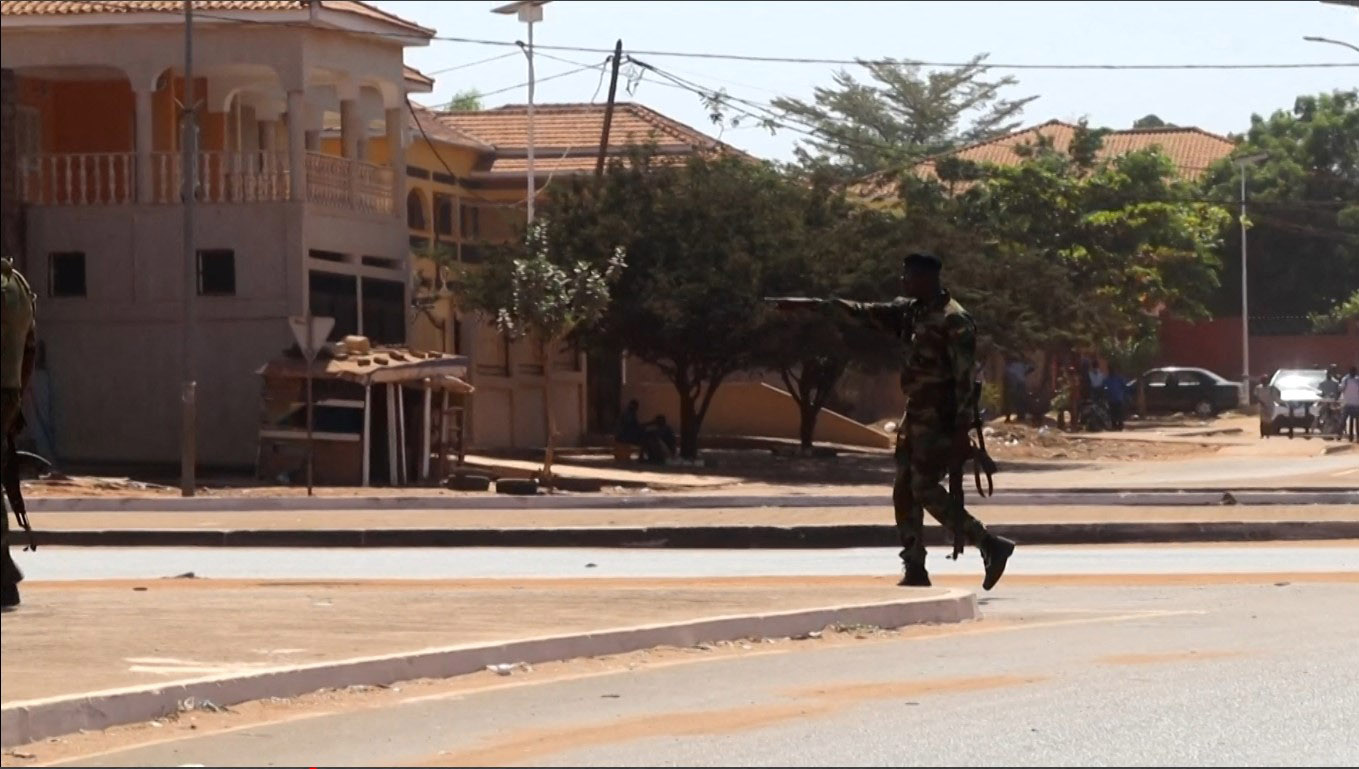 A soldier patrols the government palace area in Bissau, capital of Guinea-Bissau, on 1 February 2022 after a regional bloc condemned what it called an 'attempted coup'. (Photo: AFPTV teams/AFP)

Guinea-Bissau, a tiny country sandwiched between Senegal to the north and Guinea to the south, is widely dubbed a ‘narco-state’ because for two decades it’s been a conduit for cocaine from Latin America into Europe.

After a rash of coups over the last two years in West Africa and the Sahel, bearing many similarities to each other – including the effects of Islamist violent extremism – a “very strange coup attempt” took place last week in Guinea-Bissau. It was a very different kind of would-be putsch, very likely linked to the country’s deep involvement in drug trafficking.

Guinea-Bissau, a tiny country on the Atlantic Ocean, sandwiched between Senegal to the north and Guinea to the south, is widely dubbed a “narco-state” because for two decades it’s been a conduit for cocaine from Latin America into Europe.

On February 1, armed men attacked the presidential palace with heavy gunfire for about five hours, trying to kill or at least topple President Umaro Sissoco Embalo and Prime Minister Nuno Gomes Nabiam, who were in the building. Eventually, loyal troops managed to fight them off.

It remains unclear who the attackers were or what motivated them. Embalo held a press conference where he said that 11 people had died in the alleged coup attempt. Although vague on the identity of those behind the incident, the president indicated its possible links to the cocaine trade: “Some individuals involved in this cowardly and barbaric act were already being investigated for drug trafficking.”

Guinea-Bissau became a transit point for Latin American cocaine bound for Europe in the early 2000s. For a time the state was completely captured by Latin American, mainly Colombian, drug lords who paid off government officials – all the way up to the president, apparently – to look the other way as they pumped cocaine through the country.

In August 2007, for example, law enforcement authorities raided a warehouse in the capital, Bissau, which was being used by two Colombian drug lords. They found a whiteboard on which the drug traffickers had detailed all the top government officials who were being bribed to protect the drug trade. The officials included President Joao Bernardo Vieira, military chief of staff General Batista Tagme Na Waie, Admiral Bubo Na Tchuto – head of the shipless navy – and the Chief Justice.

Vieira and Tagme Na Waie were clearly then in cahoots in protecting and  profiting from the drug trade. But they fell out, possibly because they became too greedy and tried to muscle in on the trade themselves, rather than just accepting protection money to turn a blind eye. In March 2009 Tagme Na Waie was killed by a bomb placed in military headquarters. His loyalists blamed Vieira and the next day they barged into the presidential palace and beat him to death.

After Vieira’s death, Guinea-Bissau descended into even further chaos of assassinations, a coup and general political violence as the military assumed greater power, sometimes acting through puppet civilian leaders.

“A 2012 coup, which brought a military junta led by General Antonio Indjai to power, was so clearly driven by competition for control over the country’s lucrative cocaine markets that it has been dubbed the ‘cocaine coup’ ” says Lucia Bird of the Global Initiative Against Transnational Organized Crime.

Bubo Na Tchuto then became more powerful and prominent in the drug trade. But this attracted international attention and in 2013 the US Drug Enforcement Administration seized and arrested him in a sting operation.

In 2016 he was tried, convicted and sentenced to four years’ imprisonment in the US.

Bird notes that a decline in reported cocaine seizures in Guinea-Bissau since 2008, and a near absence in the period between 2013 and 2018, drove speculation that the country had abandoned its role as an international drugs transshipment hub.

“However, two cocaine seizures in 2019 – of 789kg in March and 1,869kg in September – soon put paid to this theory. These seizures, as well as others in neighbouring countries, have once again shone the spotlight on West Africa as a major cocaine ‘corridor’.

“The deep-rooted involvement of Guinea-Bissau’s political-military elite in this illicit market has been a critical factor driving Guinea-Bissau’s repeated cycles of political turmoil,” Bird said in a blog.

She noted that last week’s apparent coup attempt seemed to echo the 2012 coup which brought Indjai to power. That seizure of power “was so clearly driven by competition for control over the country’s lucrative cocaine markets that it has been dubbed the ‘cocaine coup’ ”.

When Embalo, the current president, took office in February 2020 after a bitterly contested and widely disputed election, he vowed to eliminate drug trafficking.

But Bird says the cocaine trade continues and some of those previously involved in it seem to have made a comeback. Indjai, who has been on the sanctions lists of the UN Security Council, EU and US for his involvement in cocaine trafficking and his role in destabilising Guinea-Bissau since the 2012 coup, and other sanctioned individuals “returned to public political life” after Embalo took office.

She notes too that in 2019, a major drug trafficker, Seidi Ba, was convicted in absentia of coordinating the import behind a bumper cocaine seizure. But his sentence was drastically shortened in late 2020, after Embalo became president.

“There have been no convincing prosecutions of drug traffickers since – and they are extremely rare in Guinea-Bissau,” she told Daily Maverick. “Since Embalo came to power, the Judicial Police – the most effective element of Guinea-Bissau’s law enforcement – have been more limited in their ambit of operations, focused on corruption of opposition political figures, rather than on drug trafficking.”

For all these reasons Bird is convinced that last week’s apparent coup attempt was linked to the cocaine trade. The strong speculation that former navy chief Bubo Na Tchuto was arrested in the wake of the incident lends credence to the belief that it was about drug trafficking.

She says that the attack was either perpetrated by those involved in cocaine trafficking, or was “helpful in the current administration’s positioning to observers at home and abroad. The cocaine trade has once again played a pivotal role in shaping Guinea-Bissau’s cycles of political instability.

“Guinea Bissau remains a key transit point on cocaine trafficking routes between Latin America and Europe – there is no evidence this has diminished since Embalo came to power,” she concludes.

Maurice Toupane, a senior researcher for the Institute for Security Studies, based in Dakar, told Daily Maverick that although the real motives of the assailants last week were not yet known, “it must be stressed that this attempt comes in a tense socioeconomic and political context.

“Guinea-Bissau has not yet emerged from instability. The risk of the country falling into another crisis remains.”

For that reason, regional leaders, meeting in a summit of the Economic Community of West African States (Ecowas) two days after the attack in Bissau, decided, at the request of Embalo, to deploy a stabilisation force in Guinea-Bissau, just 17 months after it withdrew its previous stabilisation force from the country, following eight years of deployment, in September 2020. DM