Friendship is everything in ‘Love! Valour! Compassion...

Friendship is everything in ‘Love! Valour! Compassion!’ at the Artscape 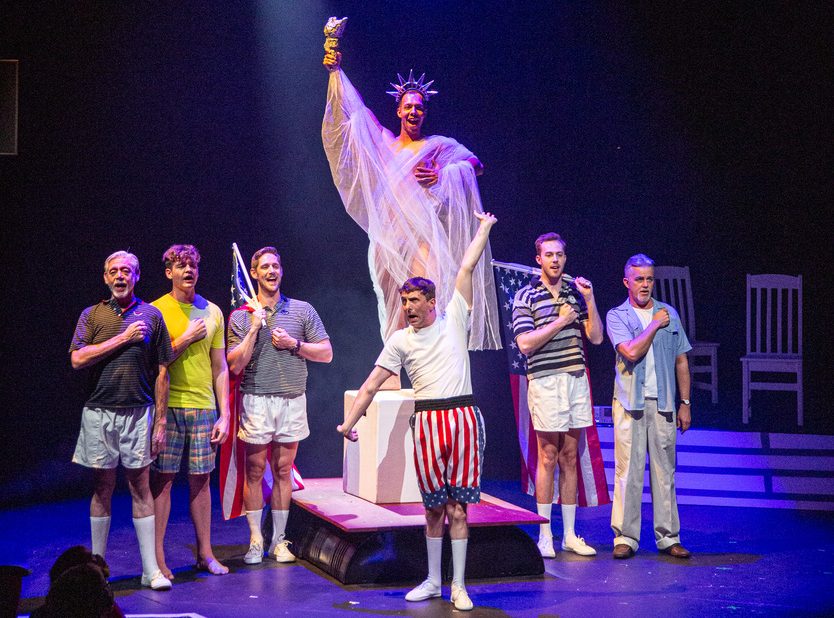 Written by Terrence McNally, this production of the Tony Award-winning play is a warm celebration of life and light that shines despite the darkness.

Set in the 1990s America, eight friends descend on a summer house for three consecutive national holidays, bringing with them a whole lot of love and laughter.

It takes a moment to familiarise oneself with the joyous and fun cast: Gregory Mitchell is the owner of the holiday house and a successful Broadway choreographer; he is accompanied by his lover, Bobby Brahms, who is much younger and blind. Arthur Pape and Perry Sellars are in a long-term relationship, and celebrate their fourteenth anniversary on one of the weekends, and Buzz Hauser is a wealth of theatre knowledge who breaks into song throughout. Ramon Fornos, who is a new addition to the group, is accompanied by his lover John Jeckyll. James van Helsdingen, who plays John, also plays his twin brother James Jeckyll – and he only arrives in the second act.

The show deals with important, complex, and difficult topics, such as HIV/Aids, death, infidelity, ageing, disability and trauma. Yet it is never serious for long and gives each topic the attention and respect they deserve while still letting light and laughter bleed through. It is a funny and joyful take, and realistic in that this is life – and what are hardships without being able to debate and poke fun at them with your closest friends? The show does hold the audience with a few sombre moments, but they are interspersed among jokes and jabs that send ripples of laughter across the theatre.

While the set itself is minimal, the production uses every piece of the space available and more, pushing the boundaries of the stage and leaving audiences with the sense that nobody is ever too far away. They are spread out across the house, sometimes out of sight but never out of the story.

John’s piano can be heard from the wings, almost as if he is just in the other room while the rest of the guests lounge, dance, and sing along. While this is a convenient device that allows Van Helsdingen to play James while John is out of sight playing piano, it never feels forced. Rather, it allows the friends to always be together, as the music floats through the house.

The other actors move in and out too, passing from room to room or leaping off the raft into the lake and swimming out into the wings. The spaces that are visible to the audience are fully taken advantage of too.

Gregory Mitchell fondly describes his house at the beginning of the production, telling of the many rooms and gardens that lead down to the lake, but there is no grand set design to bolster his picture. Rather, a few platforms raise parts of the stage and white cubes are moved to set up various scenes – anything else would be distracting in a production where it is each performance that really shines and is given the space to hypnotise the audience, who give the men their full attention. The large proportion of the house is not lost in the minimal set; conversations are had on the lake at the edge of the stage, while coffee is prepared at the house, toward the back. This mastery of space creates an intimacy with the audience and the impression that it moves along with each character. Combined with excellent lighting – shadows and ripples dance on the stage floor like sunlight through trees and on water – and a stellar soundtrack, the show makes up for an empty set with a plot and performance that is full of emotion.

The show is both a tribute and a mourning of the human body and how it changes, weakens, sickens and carries.

Ramon, who seems to spend more time out of his clothes than in them, is perhaps the most carefree within his body, and as he stretches out on the raft in the lake, there are always eyes on him. Although his antics are entertaining, his relationships appear superficial, and he can be perceived as simply a playboy whose presence is only impactful when it leads to conflict between others – such as Perry and Arthur, whose performance is spectacular in its pure ordinariness. Their touches have the comfortability of people who loved each other for years, they lean into each other and gravitate towards one another with ease, their bodies fitting together as if they were not made to be apart.

It’s a stark contrast with Bobby and Gregory, who seem to be pulling apart from each other. Gregory spends his days in his studio, wrestling with his body as it ages and takes his livelihood of dance with it. Meanwhile, Bobby can be found wandering around the house or the garden – the others question how the two can work as a couple, contending that Bobby could never truly know Gregory as he will never physically see the dance that makes the older man who he is.

And then there is the heartbreaking way that Aids is slowly killing Buzz and later, James. While not all eight of the friends are sick, it is clear that this affects them all in some way – either personally, or just by the reality of being a part of the queer community in the nineties.

At one point in the play, Perry laments that he “will always feel like a bystander at the genocide of who we are”, as he reflects on the shadow of Aids that hangs over them, like a Damocles sword.

While relationships hit highs and lows, lovers and friends fight and make up and meals are shared; there is something fondly familiar about the show, as the characters search for meaning and grapple with the realities of living and dying. And within the imminence and inevitability of death there is the overwhelming heartbeat of life and humanity that binds the show together, and the cast and the audience with it. DM/ML

Love! Valour! Compassion! shows at the Artscape in Cape Town until 12 February 2022. The show is age-restricted to 16 and over.