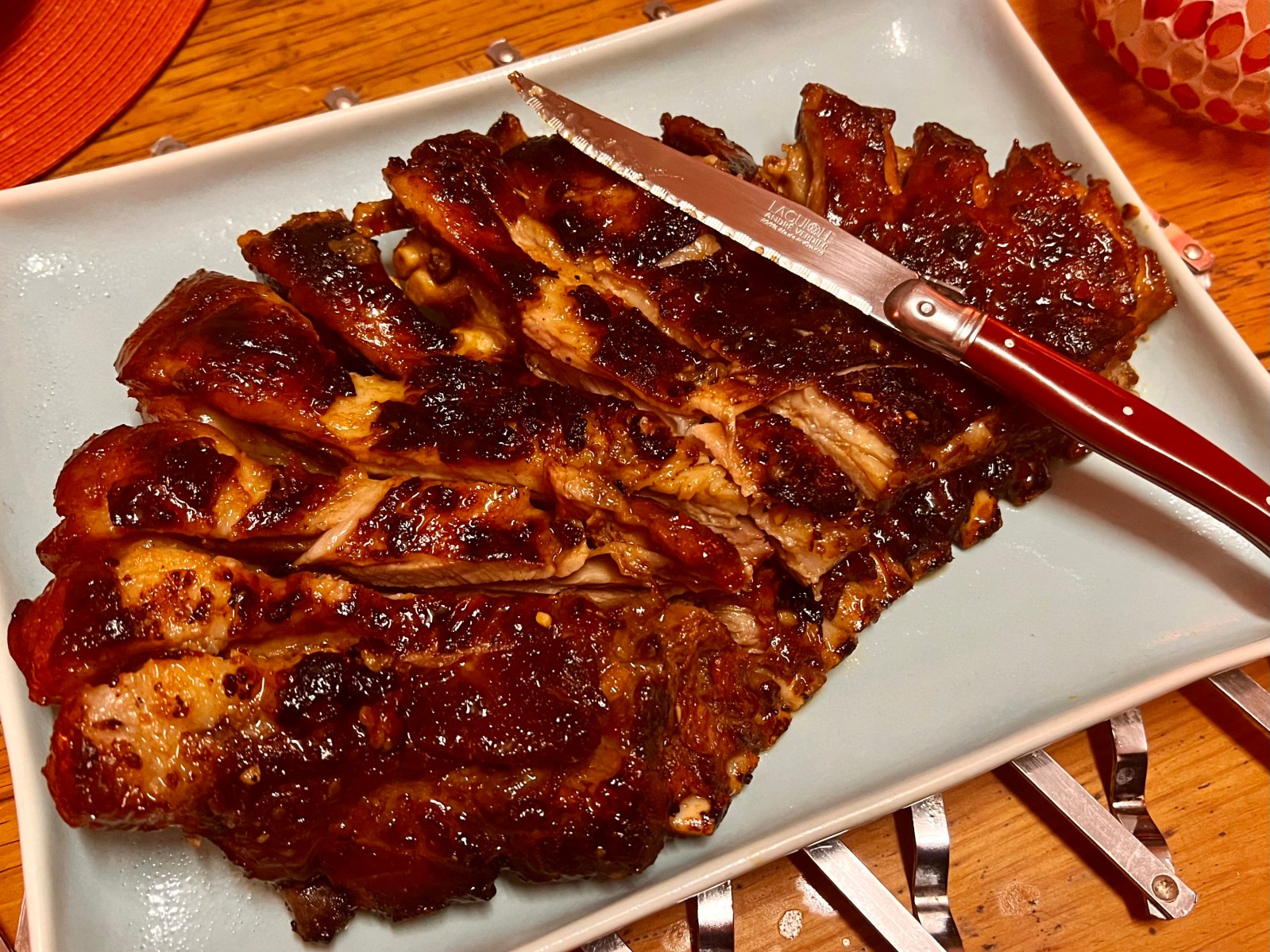 Whether you use pork, lamb or mutton, the objective is the same: to turn out fall-apart tender ribs packed with moreish flavour that gets your fingers sticky. Pass the jammer lappie, somebody.

Never is a jammer lappie more called for than when everyone dives into a plate piled high with ribs, fastest fingers first. A jammer lappie, for the uninitiated, means literally “sorry cloth”, a damp tea towel or similar passed around for people to wipe their hands (and faces) on while eating messy meaty things without the nicety of a knife and fork.

Few South African meat eaters are going to argue with the claim that sticky ribs are a national favourite for the braai, shisa nyama or at your local Spur steak ranch. It’s food for putting a bib on, ignoring the knives and forks, and not making any apology for the mess that is slowly spreading across your face.

At the Spur and a million other steakhouses or dens of carnivorous iniquity they’ll be served in great slabs for you to pull apart or tear apart with your teeth, bringing out the primitive hunter-gatherer in us. There’s something primal about getting stuck into a mound of ribs. It conjures the dribbling kid unable to contain himself when presented with his supper, eyes focused on the task ahead, ears closed to anything the parents might be saying. I should know: I’ve seen my GrandBoy attack his food. It’s almost religious in its solitary intensity. His entire stance seems to say: Can’t talk now. Eating.

Pile into ribs with a great dollop of pap, plenty of chakalaka and, in “The Lazy Makoti” Mogau Seshoene’s version, plaited corn. (It’s the leaves of the mielies that are plaited; must give that a go some time.) Seshoene’s recipe for sticky pork ribs uses chicken stock with soy sauce, maple syrup, brown sugar, garlic and ginger and pairs them with chicken wings. Or go the monkey gland route (chutney, tomato sauce, Worcestershire sauce et al), that old-time South African sauce with all the finesse of a bull that’s run out of china shops. But who wants finesse when you’re talking about ribs. It’s flavour you want, and it’s sticky you want.

But there are sticky sauces and there are sticky sauces. I am not a fan of the ubiquitous “steakhouse sauce” which you can buy these days in big plastic bottles from trade stores; it’s a tradition that emerged from the popularity of monkey gland sauce in decades gone by and evolved (or devolved) into that ubiquitous sticky gloop. It gets brushed onto steaks and ribs at a thousand steakhouses throughout the country. If your ribs and steaks all taste the same at every place you order them, that’s most likely what you’re getting. They don’t taste of anything in particular; they taste of sweet, sour and brown. The idea of it is still sound; it’s just the recipe that has deteriorated into an unidentifiable melange of who-knows-what; the kind of sauce you get when it’s designed by a committee.

We may think of sticky ribs as a South African thing, and it is, but it is American too. In the US, your ribs are most likely to be pork and served with a barbecue sauce, but they could be beef too. Now you’re truly talking about feeding a crowd. Sticky ribs from your high street Chinese takeaway are often deboned and doused in a sweet and sour sauce. You can be pretty sure there’ll be MSG in there. Korean pork spare ribs are slow-cooked in soy sauce with ginger and garlic until tender before being brushed with a sauce of sesame oil, red chilli paste, honey and several other things and roasted.

That other meat-mad country, Argentina, favours beef ribs, not surprisingly. There, beef short ribs are a speciality, a popular asado (barbecue/braai) dish grilled simply and served with chimichurri sauce; quite a different thing from the South African idea of sticky ribs at the braai or shisa nyama. But garlicky pork ribs will be found at many an Argentinian Sunday asado too, and that’s a thought I’m storing away for exploring in a future recipe. In India, pork ribs are cooked in pork-loving Goa in a curry broth with plenty of spices, tamarind and of course chillies.

In the Karoo, our ribs are often mutton or lamb, though pork ribs are popular too. My recipe as given here can be used for any of these ribs, whether mutton, lamb 0r pork. The cooking technique is exactly the same. The resulting overall flavour will alter depending on which of these cuts you choose, as the meat itself holds onto its intrinsic flavour and quality while taking on the ingredients you’re cooking it with.

A popular method of cooking a whole rib on the braai in the Karoo is to braai it in a grid at right angles to the coals, so that the fat drips down while it cooks slowly. They’re first basted with Worcestershire sauce and salt and black pepper, then cooked side-on while you down a couple of beers and tuck into some skilpadjies, and finally grilled on hot coals to crisp it up. But my recipe is for cooking a rib in two parts.

With friends coming over for a braai supper the other day, I spent the afternoon slow-cooking a whole lamb rib in the oven, then left it to cool until we were ready for me to finish it on very hot coals. They were already fall-apart tender but not so much so that they might disintegrate while crisping them on the coals. That’s the trick.

Whatever your choice of liquid flavourings (such as rine wine, vinegar, honey, molasses, soy sauce etc), you need a carrier stock. Many recipes call for chicken stock, but because I used red meat (rather than pork) I chose to use beef stock. Don’t be too shy with the quantities either. Ribs are not about subtlety, although for my taste resorting to the ubiquitous shop-bought steakhouse sauce is a bridge too far. But I may have already mentioned that.

1 whole rib of either pork (spare rib or baby back), lamb or mutton

The bones of the rib should be cut through but held together with meat and fat.

Combine all ingredients except the rib in a suitable deep oven dish. Season both sides of the rib with salt and black pepper. Immerse the rib in the dish and make sure it is as well covered with the cooking stock as possible.

Leave it out of the oven, covered, until you’re ready to crisp it on the braai. Don’t forget to turn the oven off.

Braai just until the fat is beautifully crisp, basting with any remaining marinade. Turn it a couple of times. Go on, have a beer. Nothing could match the moment better. DM/TGIFood