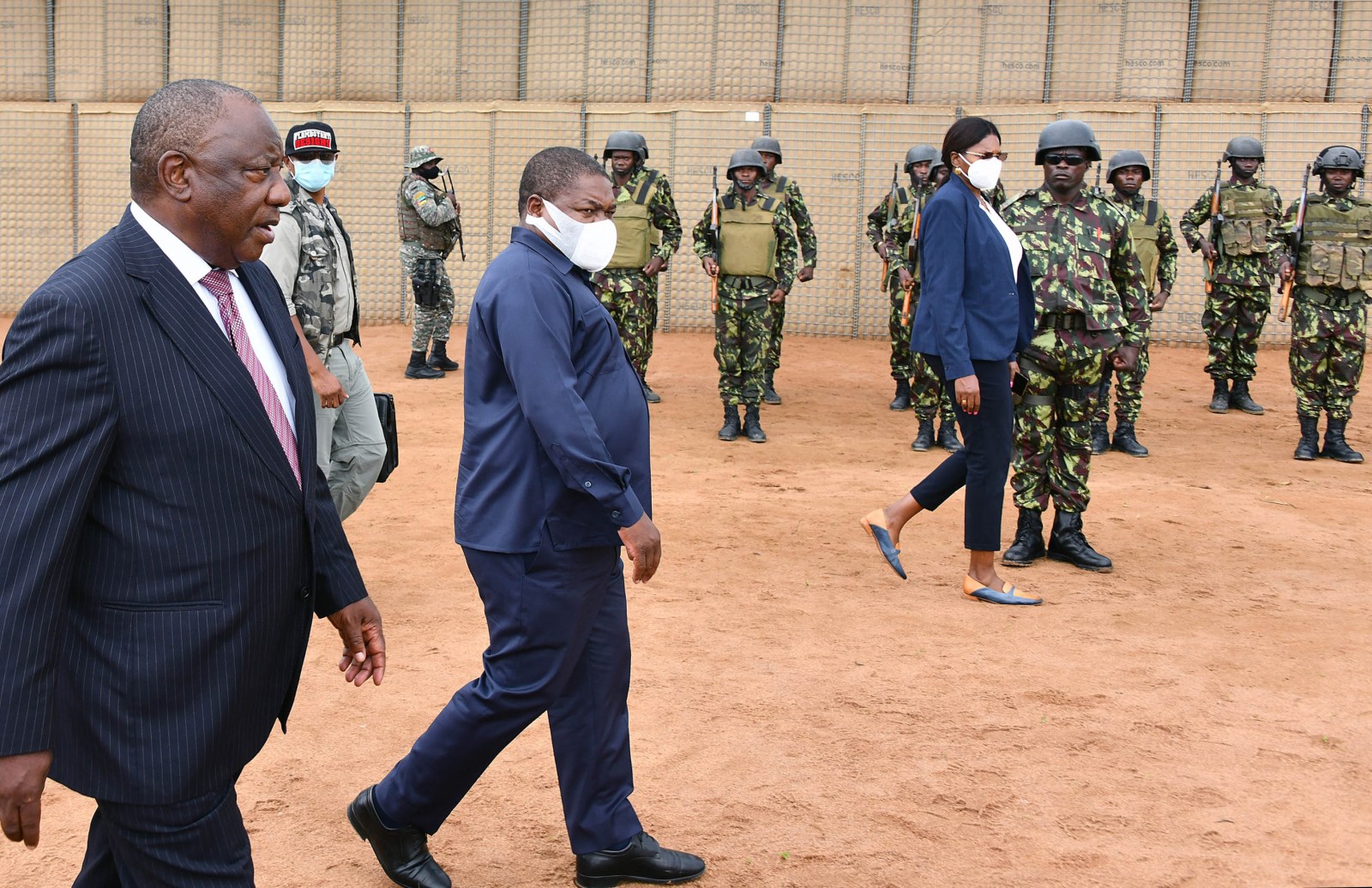 President Cyril Ramaphosa has paid a working visit to Mozambique’s President Filipe Nyusi. He also met troops from the SADC Mission in Mozambique for the first time as the region scrambles to find funds for a six-month extension of the deployment.

President Cyril Ramaphosa was invited by Mozambican President Filipe Nyusi to the 53rd commemoration of the assassination of Frelimo’s founding president, Eduardo Chivambo Mondlane, on Thursday.

Talking up the ties between the two countries, Ramaphosa said: “The solidarity and comradeship between our liberation movements continue to inspire us to work harder for our people in pursuit of our shared vision for the SADC region and the African continent.”

He also met troops from the SADC Mission in Mozambique (Samim) in his capacity as chairperson of the Southern African Development Community (SADC) Organ on Politics, Defence and Security Cooperation.

Last month, the SADC met to extend the deployment of the troops, which began in July 2021. In a parallel effort, Rwanda deployed its defence force in Mozambique a month earlier. The troops are battling Islamic insurgents in Mozambique’s northernmost province of Cabo Delgado.

Up to now there’s been little coordination between the two deployments, and the matter has caused friction between Mozambique and the SADC as well as within Mozambique itself.

The matter of funding for the mission was on the agenda of the African Union’s Peace and Security Council (PSC) meeting in Addis Ababa on Monday ahead of the annual AU heads of state summit in the Ethiopian capital this weekend.

It’s the first time the situation in Cabo Delgado has been discussed by the PSC since the insurgency started in 2017. The PSC is yet to issue a statement on the meeting’s outcome, and a press conference scheduled for Thursday was postponed.

However, in tweets the AU’s Political Affairs, Peace and Security Department said the PSC had endorsed the Samim deployment and appealed to the international community and the European Union for financial support for the cash-strapped mission and for Mozambique’s security forces.

The political head of the department, Bankole Adeoye, welcomed Rwanda’s support of Mozambique.

At least three funding and logistical support options were considered, according to a briefing note by Amani Africa.

The first option is to use the African Peace Facility’s (APF’s) Early Response Mechanism (ERM), a European Union initiative worth €55-million that provides the AU and regional communities, such as SADC, with funds that are immediately available for the management or prevention of violent conflicts. However, the purchase of lethal military equipment, such as ammunition and arms, is not permitted under the ERM.

The second option is the new European Peace Facility, which replaced the APF in 2021. This financial tool does allow the purchase of lethal military equipment.

The third option is the use of the Continental Logistics Base in Douala, Cameroon, which was inaugurated four years ago and which has been providing equipment to member states including Niger, Burkina Faso and South Sudan.

The SADC is currently using its own money to sustain its deployment, hailed by leaders at last month’s summit as “a unique precedent for the African continent”, and it is understood that some countries in the SADC want to continue to find funds for Samim locally.

There have, however, been obstacles. Last month, Lesotho Finance Minister Thabo Sophonea said the country’s troops might have to withdraw from Samim because his government “doesn’t have money to continue paying the soldiers’ allowances in Mozambique” or for the food, according to the Cabo Ligado weekly newsletter. There are currently 125 soldiers from Lesotho, comprising just over 11% of the mission’s deployed strength.

According to the publication, the SADC has collected just more than $6-million of the $7.3-million promised by member states to support Samim, with the Democratic Republic of Congo, Mauritius and Malawi owing most of the remaining $1.3-million. Amani Africa remarks that the insistence on self-funding raises questions about sustainability and it puts the total budget for the mission at $35-million.

Samim’s challenge in getting money from the AU stems from the fact that it took more than six months before the AU was briefed and endorsed the mission. Analysts say there are serious shortcomings in the way security issues are handled by the PSC and regional intervention forces.

Shewit Woldemichael, a researcher at the Institute for Security Studies who is based in Addis Ababa, told a webinar hosted by the institute on Tuesday: “When SADC requested financial and in-kind support from the AU, including accessing supplies for the mission of the Africa Standby Force, there was no mechanism through which the AU could support SADC because neither the crisis nor the mission were discussed by the PSC.”

The head of the EU Military Staff, Hervé Bléjean, urged the European Parliament last week to allow the EU training mission in Mozambique to coordinate with Rwandan forces and for EU troops to be allowed to deploy to Cabo Delgado too to show their courage to be equal to Rwandan, Samim and Mozambican troops.

This came days before TotalEnergies CEO Patrick Pouyanné visited Maputo on Monday, saying the company was hoping to restart its $20-billion liquefied natural gas (LNG) project in Cabo Delgado after an attack by insurgents on Palma, a small town near its plant, halted the project 10 months ago.

A South African contract worker, Adrian Nel, was killed in the attack.

The Rwandan deployment is largely focused on creating a safe zone around the plant.

Reuters reported that Pouyanné told reporters the project can restart when “life is back to normality, which means having some state resources and population”, preferably this year. He also signed a deal to train 2,500 young Mozambicans to contribute to its LNG project, such as growing vegetables to sell to feed workers there.

Earlier, Pouyanné stopped off in Rwanda’s capital, Kigali, to sign a memorandum of understanding with the Rwanda Development Board on projects related to energies.

Cabo Ligado commented that these events seem to indicate that the EU’s support for Rwanda is largely for the benefit of TotalEnergies. DM