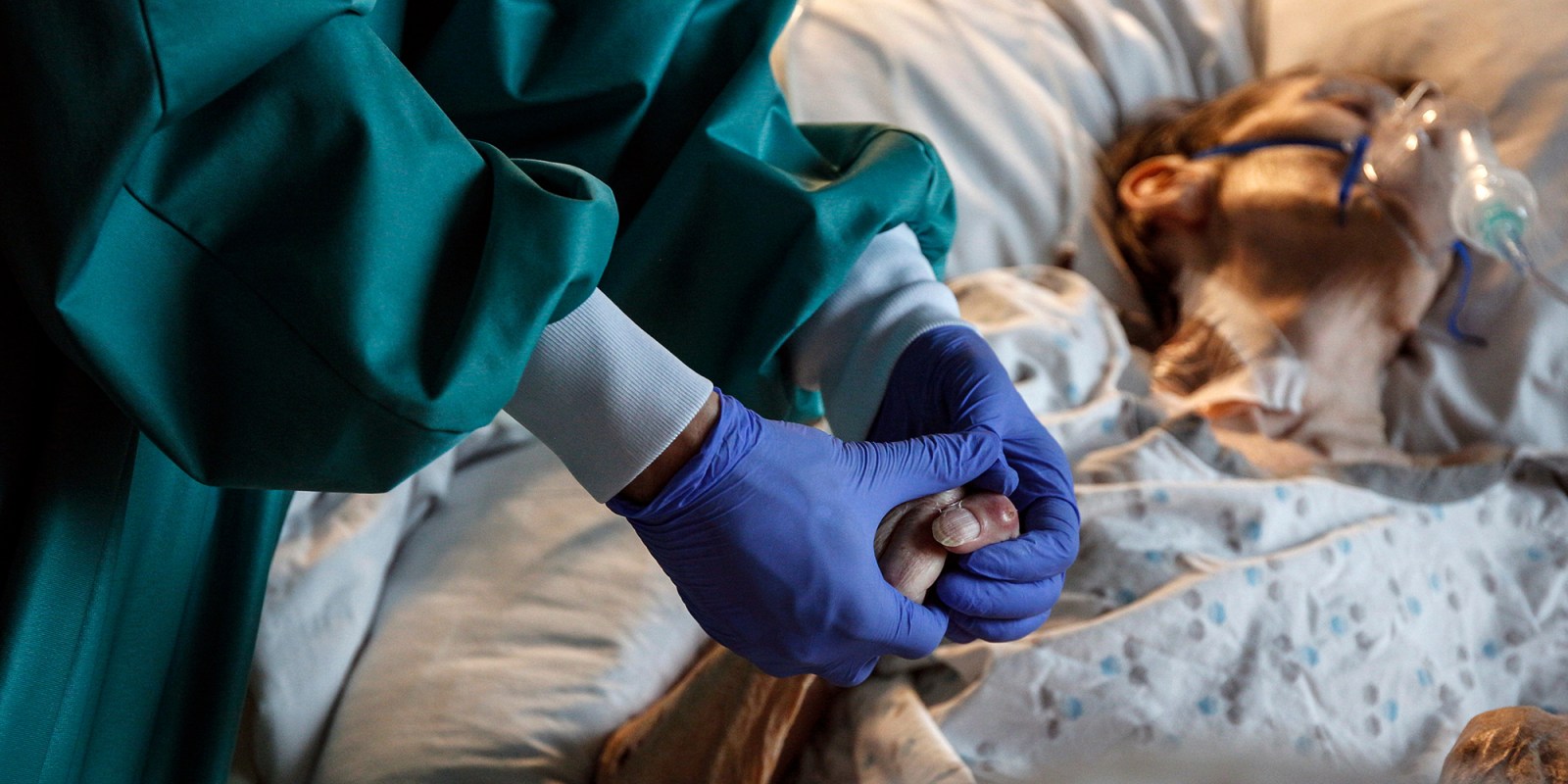 A physiotherapist assists a patient in a Covid-19 unit at the Clinique CHC Montlegia hospital in Liege, Belgium, on Wednesday, 2 February 2022. (Photo: Valeria Mongelli / Bloomberg via Getty Images)

US Senate Republican leader Mitch McConnell said it is “time for the State of Emergency to wind down” after almost two years.

Europe accelerated steps to roll back Covid-19 curbs after efforts to control the Omicron variant proved largely futile. Italy will drop restrictions for vaccinated people even in high-risk areas, and Finland will lift limits on gatherings and ease curbs on restaurants and bars. Switzerland scrapped the obligation to work from home.

Hong Kong eased the rules to release patients from the hospital, a move that should shorten stays as the city grapples with a growing number of infections that are taxing its healthcare facilities. 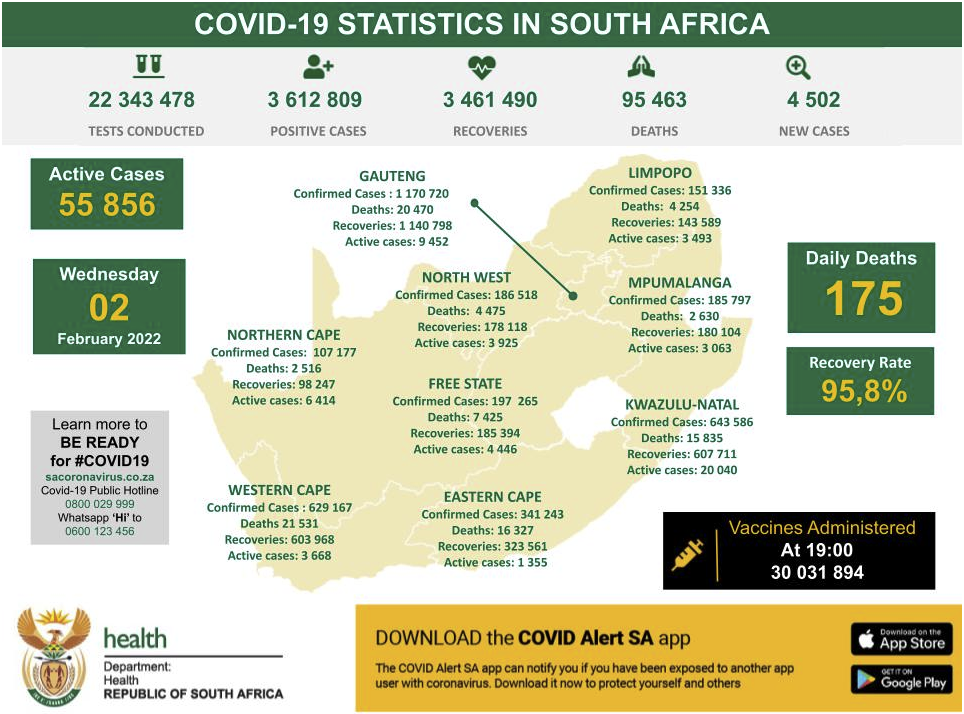 South Africa’s excess deaths, seen as a more accurate assessment of the impact of the coronavirus than official statistics, have fallen to levels last seen before the Omicron variant was identified.

The number of excess deaths, a measure of mortality over a historical average, fell to 886 in the week ended 23 January, compared with 1,329 the week earlier, according to the South African Medical Research Council. That’s the lowest since the week ended October 24 when there were 824 excess deaths.

The first Omicron cases in South Africa were identified from samples taken in early November. The fall in mortality adds to evidence that the variant, while more transmissible than earlier strains, causes milder disease. The seven-day average of confirmed cases in the week ended 20 January was 3,723, compared with 506 in the week ended October 21, according to government statistics.

Italy will drop restrictions for vaccinated people even in high-risk areas, Prime Minister Mario Draghi said, vowing to continue easing curbs in coming weeks. A four-tier system of restrictions is in place in Italy, with tighter rules for regions where infections and hospitalisations are higher, but regional authorities have asked to scrap it altogether.

At a Cabinet meeting on Wednesday afternoon, Draghi said the government will announce a calendar of future reopening steps, and vowed to limit online schooling as much as possible.

McConnell: ‘Time to wind down’ emergency

US Senate Republican leader Mitch McConnell said it is “time for the State of Emergency to wind down” after almost two years. McConnell said in floor remarks that the nation should accept that Covid-19 is here to stay. He also said he wants unallocated pandemic relief funds to be accounted for and questioned the need for additional virus-relief spending. Former President Donald Trump declared a national emergency in March 2020, and President Joe Biden extended it until 1 March of this year.

Switzerland will ease Covid-19 restrictions, including an obligation to work from home and quarantine for those who have come into contact with someone who has tested positive for the virus.

The government said it will consider lifting all rules, including showing Covid certificates in restaurants and wearing masks on public transport, later this month.

A subvariant of Omicron known as BA.2 is spreading rapidly in South Africa and may cause a second surge in infections, one of the country’s top scientists said.

Studies point to BA.2 as being more transmissible than the original Omicron. The second onslaught means the Omicron wave “may end up like a camel,” Tulio de Oliveira, a bioinformatics professor who runs gene-sequencing institutions and advises the government on the pandemic, said at a presentation at Stellenbosch University. “A wave with another hump.”

Finland’s government decided to lift all limits on gatherings and ease restrictions on restaurants and bars on 14 February, keeping nightclubs closed until 1 March, Prime Minister Sanna Marin told reporters. The decisions free up cultural venues and events, as well as sports from coronavirus restrictions.

Under pressure from a pandemic-weary public, politicians across Europe are deeming many public-health measures increasingly unnecessary.

While the number of reported Covid cases worldwide remained at a similar level in the week of 24 January to the previous week, the number of new deaths increased 9% to 59,195, fuelled by increases in Southeast Asia and the Americas, the World Health Organization said in a weekly report.

Hong Kong eased the rules it uses to release Covid patients from the hospital, a move that should shorten stays as the city grapples with a growing number of infections that are taxing its healthcare facilities.

Patients will soon be discharged if they have three tests that show they are no longer infectious, Hospital Authority Chief Manager Lau Ka-hin said at a daily briefing on Wednesday.

The previous strict standards, designed to ensure no one was released when they could potentially spread the virus, kept some people with no symptoms hospitalised for weeks.

Tokyo reported a record 21,576 cases, eclipsing the previous daily record set last Friday, fuelled by the Omicron variant. Severe cases rose to 30 from 29 the previous day. Hospital bed occupancy reached 51.4%, higher than the threshold at which Governor Yuriko Koike said she would consider asking the government to declare a State of Emergency.

China reported 36 new locally transmitted cases on Tuesday, the first day of the Lunar New Year. Most of the infections occurred in areas already under lockdown.

Beijing found two more infections connected to a cluster at a cold storage facility dealing with imported foods. Tianjin, a port city near Beijing, reported 12 new local cases, two of which were found outside of isolated areas and connected to the city’s existing outbreak.

Thirty-two new cases were reported among the thousands of Winter Olympic athletes, officials and staff arriving ahead of the Games’ opening ceremony in Beijing on Friday. That number was little changed from the previous two days.

Labour shortages are becoming an increasing challenge for mine operators across Western Australia. The state is one of the world’s last Covid-Zero strongholds, having abandoned plans to loosen border controls in January.

The Western Australian resources industry relies on flying in explosives experts, truck drivers and other workers to remote sites, often from other states.

Iron ore miner Fortescue Metals Group reported a 20% rise in costs over the past 12 months, in part due to increased labour overheads, while BHP Group, the world’s largest miner, reported that temporary rail labour shortages had been a headwind.

Germany reported a record 208,498 new cases, compared with 162,613 the day before, according to the country’s public health authority. New deaths associated with the virus rose by 196, bringing the total to 118,170.

New Zealanders will be able to get a vaccine booster shot after three months rather than four starting this week, according to an emailed statement from Covid Response Minister Chris Hipkins.

The announcement means one million more people will be eligible for a booster from this weekend. More than 1.3 million people in the nation of about 5.1 million have already received a third shot.

A Japanese health ministry panel will meet as early as 10 February to consider whether to approve Pfizer’s Covid-19 drug Paxlovid, the Yomiuri newspaper reported without attribution.

Formal approval is expected to follow soon afterwards. Merck’s antiviral pill molnupiravir was approved for use in Japan in December.

The Pacific Island of Tonga has recorded its first two cases of community transmission since the start of the pandemic. The country of about 105,000 people will go into a two-day lockdown in an attempt to contain the virus, according to the Australian Broadcasting Corporation.

The infections come after aid efforts by Australia and New Zealand in the wake of a volcanic eruption in January, during which emergency services worked to provide aid while attempting to avoid transmitting the virus to the Covid-free island. DM/MC