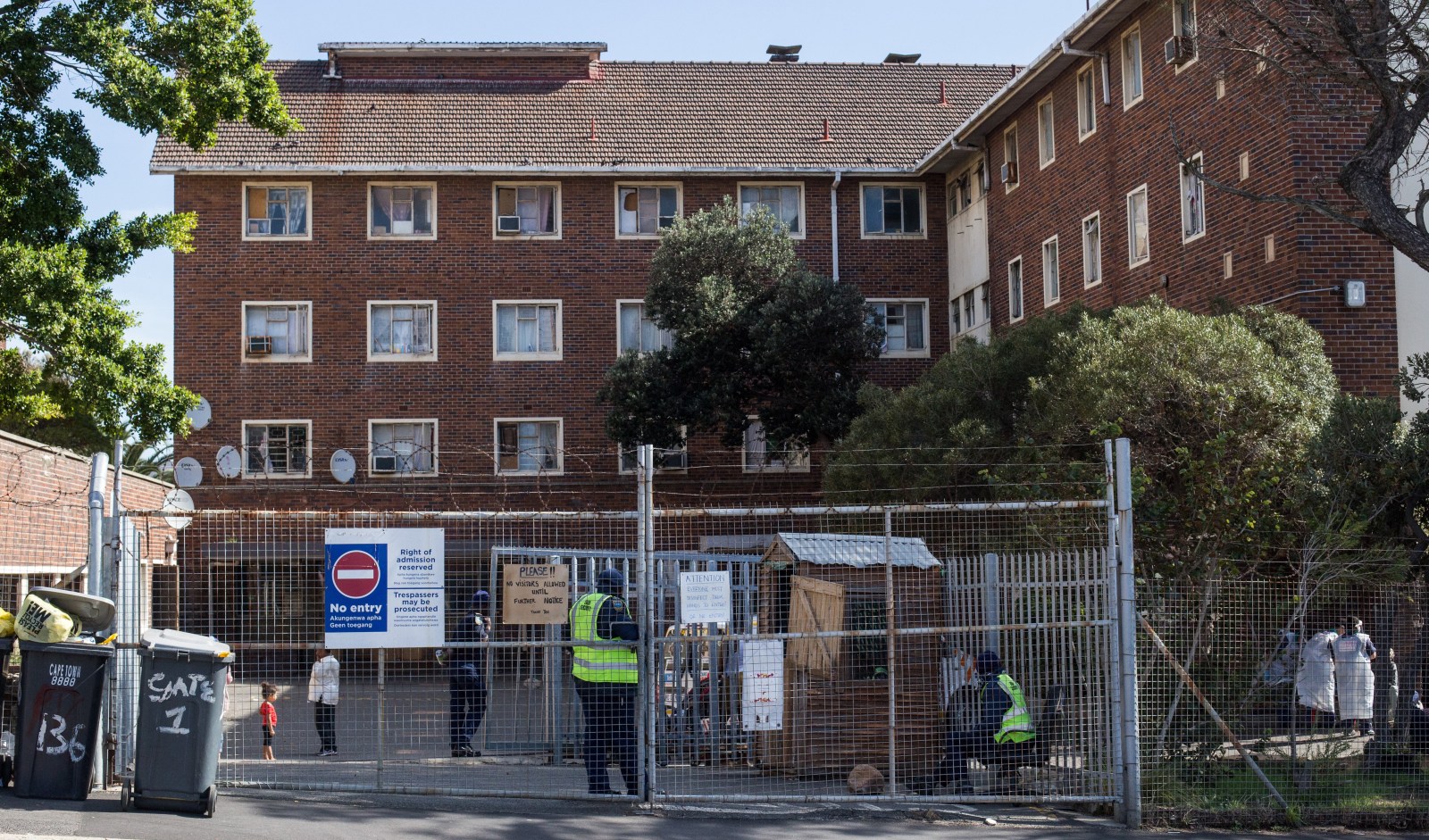 Two arrests were made for drug possession while five people were arrested for immigration offences.

On Monday morning, the South African Police Service (SAPS) led a raid of Cissie Gool House (CGH) in Woodstock with Metropolitan Police and City of Cape Town Law Enforcement, just days after a fire severely damaged parts of the building.

Formerly the Woodstock Hospital and abandoned for two decades, CGH was occupied in 2017 mostly by people in the area who were evicted or facing eviction, or unable to continue paying increasing rents.

CGH house leader Bevil Lucas said heavily-armed police officers arrived at 6am with sniffer dogs and “an arsenal of machinery for the operation”, and conducted a room-to-room search of the whole occupation.

“I heard a loud banging on my door a couple of times and I was told to open up. Because I have a hip injury, I couldn’t just jump out of bed and run to the door. I took slightly longer to get up and get to my door which agitated them because I took longer than what they expected.

“When I turned my lights on, before me stood three metro police officers and one SAPS officer saying that they were there to search through my room for drugs and illegal guns,” he said.

He said while officers searched through his room, he looked outside his bedroom window and saw a police helicopter hovering around the building. He said the occupation was surrounded by police vehicles, vans and law enforcement vehicles, and he estimated that there were more than 500 officers at the raid.

He said several doors were kicked down by officers and that the raid lasted about three hours.

“The warrant was granted to search the premises amid ongoing complaints of alleged illegal drug activity and dealing, illegal firearm activity, shootings and extortion taking place at the site,” said Le Roux.

He said officers arrested two individuals upon the discovery of drugs in their possession. Le Roux did not specify the type of drugs found. No unlicensed firearms were found in the raid. Immigration offences were not listed among the offences on the warrant, which was applied for by Metro Police Director Jorissen Lee and granted on 29 December 2021.

Lucas said there are about 1,300 people living at CGH. “It doesn’t make sense that officers were only able to arrest two people found with drugs, and five immigrants with regards to issues of their documentation,” he said. “If you take those numbers and compare it to the number of people living here, it doesn’t even make up 1% of the people.”

According to Karen Hendricks of Reclaim The City, five immigrants — four males and one female — were also arrested and are currently being held at the Woodstock police station.

“The female who was arrested has a six-month-old baby that still needs to be breastfed. So there have been challenges with her ability to feed her baby while she is still in detention. Her partner has to run down to the police station every hour to hand over the child so that the baby can be fed and nurtured.”

Hendricks said she has been consulting with the families of the detainees, and that they are “still in a lot of distress following the conduct of law enforcement and members of SAPS.”

“Little children were on their way to school, and this was once again a very traumatic experience for them,” said Hendricks.

Attorney Basetsana Koitsioe from the Centre for Applied Legal Studies (CALS), which is representing the occupants in an eviction case, said the raid was a display of the continuous intimidation, humiliation and violation of privacy of the occupants.

“Even though they had a search warrant and had a right to be there, the way that the raid was carried out is devastating.

“These search warrants need to be carried out in a less forceful, dignified and humane manner where officers can just explain to the occupants what they are looking for,” she said.

Koitsioe said it is still unclear why some of their clients were arrested and detained. She said CALS is in the process of finding legal assistance for those who were arrested. DM