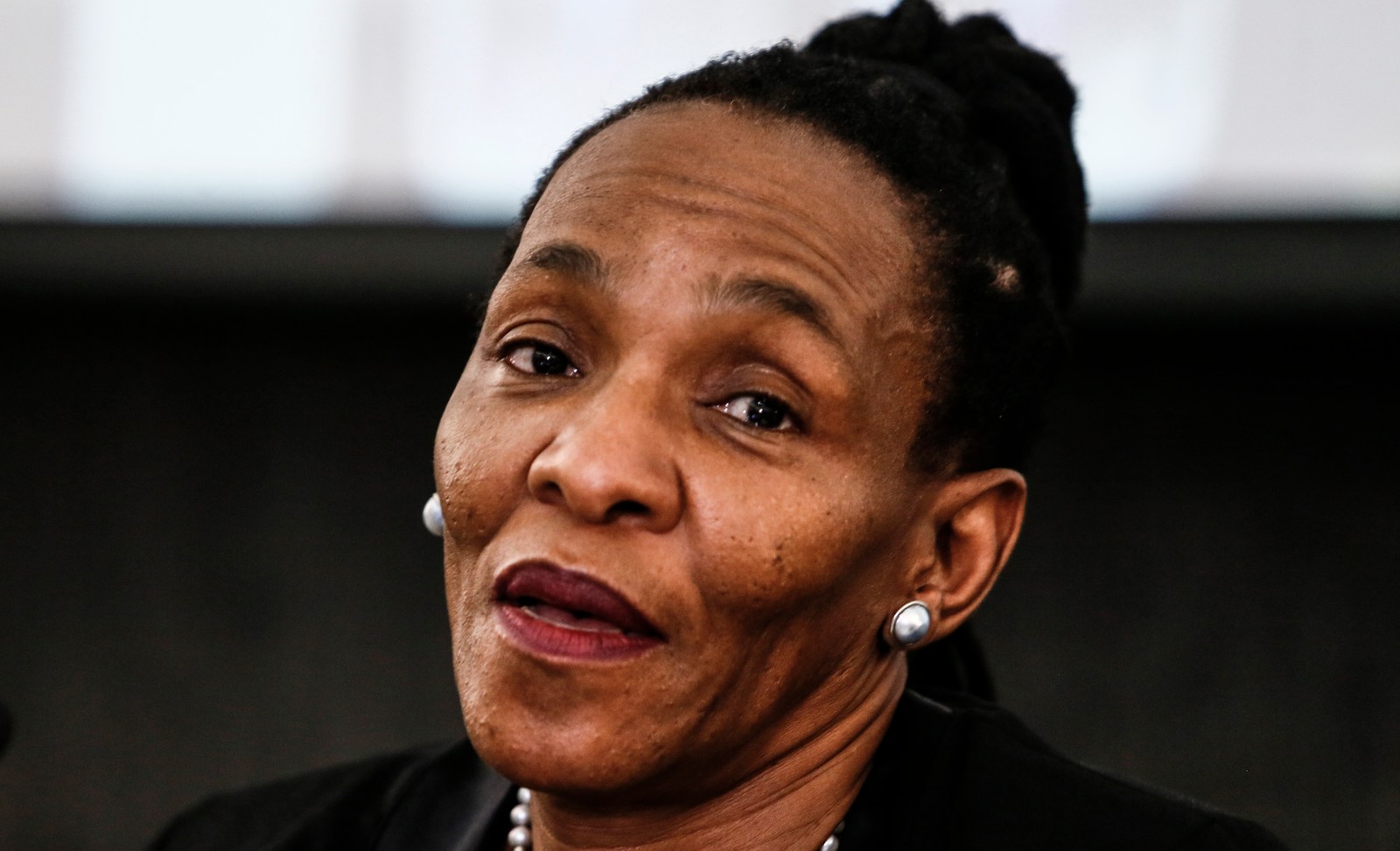 President of the Supreme Court of Appeal Mandisa Maya at her interview for the position of Chief Justice in Sandton on 2 February 2022. (Photo: Felix Dlangamandla/Daily Maverick)

Justice Mandisa Maya, the only woman among the four candidates vying for the Chief Justice position, was in the hot seat on Tuesday.

On the second day of the Judicial Service Commission (JSC) interviews for the position of Chief Justice, the question of whether South Africa was ready for a woman Chief Justice came up again as Justice Mandisa Maya, the only woman candidate, was in the hot seat.

Responding to the question posed by Judge Pule Tlaletsi, Maya said: “I don’t think it’s a proper question to ask because it implies negative things. South Africa has always been ready to have a woman Chief Justice. We’ve had [Kate] O’Regan, we’ve had [Yvonne] Mokgoro. We’ve never had a shortage of women in the judiciary.

“Was it ever asked if South Africa is ready for a black Chief Justice? When that question is asked it is as though we’re this homogenous group that’s been done a favour as though at some stage you have to check if we’re ready to become leaders.”

Maya, the first woman president of the Supreme Court of Appeal (SCA), could not get away from questions that referenced her gender. Justice Minister Ronald Lamola said: “I got a sense that you’re standing on your credentials, not on the basis that you’re a woman”. To which Maya candidly responded: “I’m not here because I’m a woman, I’m a worthy judge… I’m just a good woman judge.”

Nomaswazi Shabangu-Mndawe asked about allegations that Maya had been appointing more white male judges than women, noting that in 2019 three of the eight judges appointed were white men, and in 2020 five of the seven appointed judges were white men.

Maya said there was a “misunderstanding of what we’re trying to achieve”. She explained that she wrote to the minister of justice and correctional services and asked for two extra judges, “purely for transfer of skills”.

“We need to acknowledge that black legal practitioners who become judges started on the backfoot. White male judges have more experience, particularly in niche areas of the law.

“It’s not a sin to appoint white judges in an acting or permanent position. I am a major proponent of transformation. If you look at who acts or gets appointed at the end of the day, I am transforming the court. What I am doing is getting junior women who need the transfer of skills. But I can’t be accused of anti-transformation.”

Tlaletsi asked Maya about when she had to recuse herself from the JSC interviews for Constitutional Court vacancies in 2019 when Fayeeza Kathree-Setiloane was being interviewed.

In 2017, a letter of complaint was written by law clerks regarding alleged mistreatment by Kathree-Setiloane. One of the clerks was Maya’s daughter.

Maya responded: “I have had to recuse myself each time the candidate has made herself available for a vacancy. But I don’t hold grudges; this job that we have, that comes with immense power, is not about us, it’s about the country.”

As to how she would grapple with disciplining colleagues, Maya said “it shouldn’t be an insurmountable challenge because I’m a judge and impartiality is the name of the game”. Where necessary, she conceded, she would have to recuse herself.

While some may have argued that Maya leaving the SCA would not be good for the SCA, Maya did not agree. “I and my colleagues find it patronising and patriarchal. It implies I lead an incompetent bunch who would fail if I leave and nothing could be further from the truth. The SCA has competent staff [who are] black and white. There is no shortage of skill, leadership and experience.”

Judges Matter wrote about Maya: “By convention, the leader of the judiciary is drawn from the highest court, and there may be a view that it would not be healthy for the collegiality of the Court to bring in a judge from the outside to lead judges who were previously more senior to such a Chief Justice. Some of the controversy over Justice Mogoeng’s appointment as Chief Justice centred on how he was one of the most junior judges on the court when he was appointed as Chief Justice. There could be concerns about a lack of continuity and institutional knowledge of the Constitutional Court if a candidate is brought in from outside the ranks of the current Constitutional Court judges.”

Addressing these concerns, Maya said: “I think it’s a huge advantage that I don’t come from the current ranks of the Constitutional Court. I see it as bringing a fresh perspective. It gives me a holistic view of the entire institution and its challenges.”

Maya became deputy president of the SCA in 2015, before assuming her current position as president in 2017.

She has served as a member of key institutions in the judiciary, including the Judicial Service Commission and the South African Judicial Education Institute, since 2017. She acted as a judge in the Constitutional Court in 2012.

The interviews will continue on Thursday with Judge President Dunstan Mlambo and Deputy Chief Justice Raymond Zondo on Friday. DM