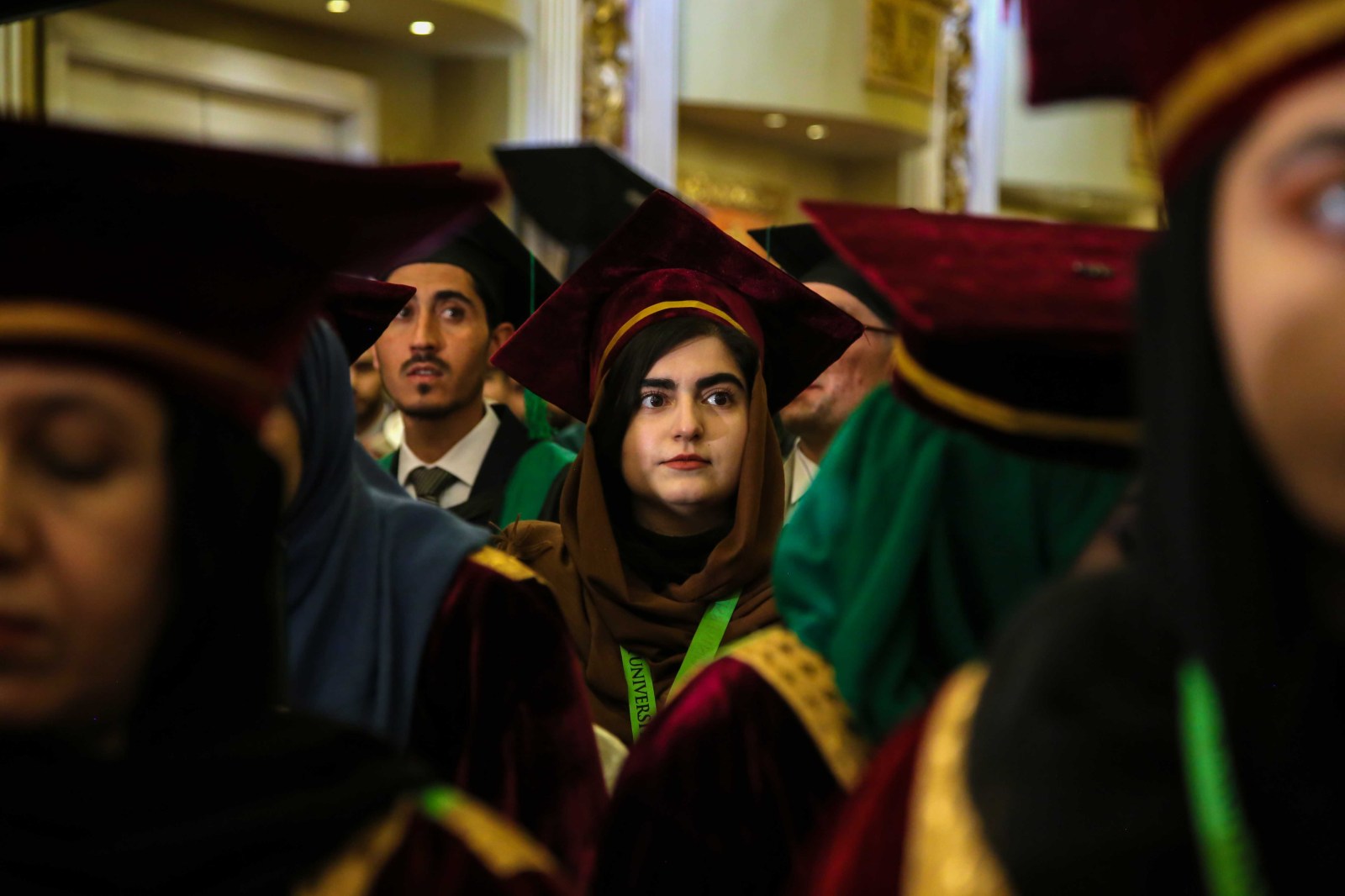 epa09658951 Afghan students attend their graduation ceremony at Bakhtar university in Kabul, Afghanistan, 28 December 2021. Some 200 Afghan students, 60 of which are women, graduated. Taliban official Mohammad Sadiq, who wields a great influence over the fate of Afghan women as a spokesperson of the ministry for propagation of virtue and prevention of vice, says female students will return to schools and universities after the winter break. The Islamist militia, which returned to power in Kabul on 15 August 2021, has banned women from work and girls from secondary schools. In the last three months of their rule, the Taliban have suppressed several women protests in Kabul and other Afghan provinces. EPA-EFE/STRINGER

JALALABAD, Feb 2 (Reuters) - Afghanistan's public universities opened on Wednesday for the first time since the Taliban took over the country last year, with female students joining their male counterparts heading back to campus.

The Taliban administration has not officially announced its plan for female university students, but education officials told Reuters women were permitted to attend classes on the condition that they were separated from male students.

A Reuters witness in the eastern city of Jalalabad saw female students entering via a separate door at Nangarhar University, one of the large government universities opening this week.

Under their previous rule from 1996 to 2001, the hardline Islamist Taliban barred women and girls from education. The group says it has changed since resuming power on Aug. 15 as foreign forces withdrew. But it has been vague on its plans and high school-aged girls in many provinces have still not been allowed to return to school.

Some private universities have reopened, but in many cases female students have not been able to return to class.

A female medical student at Nangarhar University who asked not be named for security reasons said that classes had already been separated by gender, but it was not clear if they were still able to be taught by male lecturers or interact outside the classroom with male students.

“Only our studying shifts are separated, although we have been told not to walk around the university until the boys’ time is complete,” she said.

“Despite all the changes and conditions, I still want to continue because my education should not be incomplete,” she added.

The international community has made education of girls and women a key part of its demands as the Taliban seek more foreign aid and the unfreezing of overseas assets.

Aid groups have raised the alarm that the stalled financial system and a stark drop in foreign funding that used to form the backbone of the economy are creating a humanitarian catastrophe in the country, already battered by decades of war.

The United Nations late on Tuesday praised the inclusion of female students at public universities, appearing to indicate official confirmation.

“Let’s all support the return of Afghan young female and male students to the universities across Afghanistan,” the U.N.’s Secretary General’s Special Envoy for Afghanistan, Deborah Lyons, added in a Tweet.

“Supporters can consider a range of scholarship programs and ongoing support to female and male professors,” she said.

An education official who asked not be named because he was not authorised to speak to the media said universities had been given different options to keep female students isolated, including separated classes and staggered operating hours.

Khalil Ahmad Bihsudwal, the head of Nangarhar University, told Reuters male and female students at the institution would attend separate classes, a practice already in place in many provinces.

Only universities in warmer provinces opened on Wednesday. Tertiary institutions in colder areas, including Kabul, are due to resume on Feb. 26.