BRITTANY AND THE BIRDS 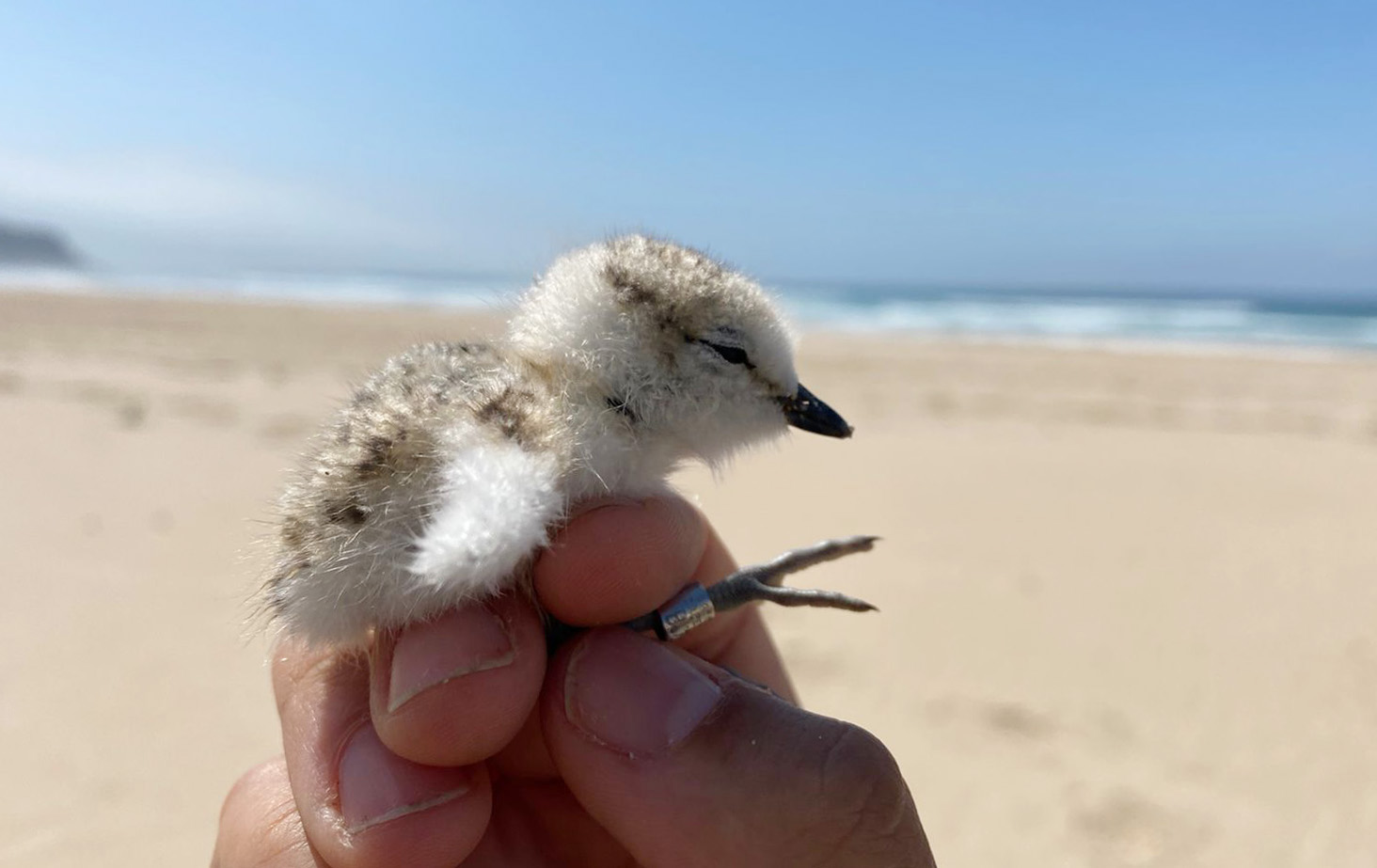 This white-fronted plover chick, pictured on Nature’s Valley beach, is as delicate as the egg it emerged from. (Photo: Angus Begg)

Plettenberg Bay is well known as a holiday destination: The jewel in South Africa’s Garden Route, which more than 100,000 visited over the festive period and where the wealthiest have holiday homes. But they aren’t the only ones who enjoy the beach.

It’s 6am and I’m in a Plettenberg Bay beach car park; a chilly wind is whipping up a blanket of hyperactive low, grey clouds, and it’s spitting on the windscreen. When I left Knysna it was sunny. I’m in board shorts, with the sort of light shirt some would label “tropical” or Hawaiian. I’m a birder, on a mission, looking for Brittany and her birds.

“We’re on Lookout [beach], just follow the pin to the vegetated area,” reads her WhatsApp.

I trudge in that slow, thick-sanded fashion across the beach, camera-kit on my back, following her pin. I remember spending unconscious, playful weeks here, 10 students hiring a prefab beach house set above the car park on a hill of stone for 30 bucks a day, a time when I was more interested in girls and Depeche Mode than birds and trees. Today that beach house has been converted into something upmarket on what looks like a grey concrete bunker, reminiscent of a World War 2 gun emplacement, and my focus is firmly on birds.

That’s how I found Brittany Arendse and the birds. I was curious about community bird guides in the southern Cape, on the Knysna-Plett stretch of the Garden Route in particular. I’d made an arrangement with one Phumzile, in KwaNokuthula township outside Plett, to meet at the Fisantekraal turn-off the previous day, with an idea of finding some forest birds, but he’d woken with a cold. So I was led to Arendse — “please, call me Brittany” — like a honeyguide winging its way down that forested N2 stretch to Plett, via the local conservation community and the Nature’s Valley Trust (NVT).

Why was I seeking a community guide? In Limpopo and KwaZulu-Natal, arguably the best bird guides have always emerged from the local, rural communities, but generally speaking, the southern Cape’s fast-growing rural settlements tend to be new and more familiar with zinc and an outside loo than a loerie.

“She’s not a guide”, says independent researcher and former NVT programme director Mark Brown, referring to Arendse, “but she’s a good person to speak to”.

Brown says he hired Brittany after mentoring her as a World Wildlife Fund (WWF) SA intern, noting that her primary interest in pollination ecology, and then marine science, “sparked an interest in birds”. She is today the trust’s conservation scientist and acting director. Brown tells me she is working on a shorebirds programme.

That’s where I find her. Near the shore, with birds.

The relatively thick coastal dune shrubbery of 30 years ago was washed away, along with Lookout beach, in 2007, and now looks very different. The beach has returned, with isolated pockets of long grasses, dune spinach and dune pumpkin found up and down the low dunes. The bleak, churning sky lends it a desolate appearance. With this imaginary watercolour painting in mind, I come across Brittany conducting her shorebird survey, seeking out the nests of African oystercatchers and white-fronted plovers in particular.

“They’re under threat,” says Brittany when I finally reach her, a few minutes after sustaining a direct head-shot from a seagull. The gulls aren’t threatened, there are so many kelp gulls and oystercatchers swirling and crying in the grim sky that it is clear that birds are breeding here (the head-shot perhaps being the most obvious clue).

Brittany and her colleague Kellyn Whitehead, who heads the NVT’s fynbos programme, are carrying a stack of placards mounted on wooden poles between them, which are designed to stave off the threat posed to the tiny, superbly camouflaged plovers and their eggs.

“It’s the plovers’ eggs,” says Brittany, “they lay them in the sand”, where they are open to dogs’ destructive curiosity and the feet of unconscious walkers. Using GPS, the two young women locate the nest of a plover identified on their previous visit at the far end of the beach, where the Keurbooms lagoon enters Plettenberg Bay. Brittany leaves Kellyn with the mallet, signs and rope to erect a wide circular cordon of warning notices 30m from the nest, which will alert passersby to the presence of nearby nesting sites “and provide our shorebirds with some space”.

She says the interventions with the rope and signs have increased breeding success from 14% on Nature’s Valley beach to 36% in the previous breeding season.

White-fronted plovers are apparently not yet officially threatened. However, “yet” could be the key word. “When this study was first started a breeding success of only 9.8% was recorded for this plover species across the Greater Plettenberg bay area… waders like the plovers have been doing very poorly across the globe, with similar breeding concerns faced by the hooded plovers of Australia and piping plovers of North America.”

All of us on Earth — elephant, lion, human and plover — are part of nature’s giant jigsaw puzzle — and these tiny birds have their place. Unfortunately, like so many species, they run up against an encroaching human tsunami on the sandy beaches where they breed in the hot summer months.

“Places like Plettenberg Bay are droning with visitors and locals all wanting to spend some time on the coast, just like the shorebirds.” The challenge is that with so much human foot traffic passing through the plovers’ territory they are flushed off their nests, and, depending on the perceived threat, they can be off their nests for a while.

“Their defence mechanism against potential threats is to run away from their eggs to lure the threat away, often feigning injury to grab your attention. The problem with this is that it leaves eggs exposed to the scorching sun for long periods and on a hot summer’s day it can take five minutes for eggs to overheat and die.”

The two women discuss an egg that looks normal to me, but given its current measurement, compared to when they last saw it, it turns out to be unfertilised.

“Shorebirds, like other birds, incubate to keep eggs at a temperature range optimal for development, but in the hot environment of the beach this means incubating to cool eggs down.” So when the eggs are exposed for too long they die. Hence the importance of the research being done by NVT and PhD student Selena Flores in collaboration with the University of Cape Town. Brittany says only once Flores has analysed the data collected will they know exactly how much trouble this pale and fawn little bird, very difficult to see against the sand, darting at great speed as it does, is in.

Brown says that the NVT’s plover work, under the #ShareTheShores banner, has been mimicked or rolled out all along the coastline, to KwaZulu-Natal, the Eastern and Western Cape, with the trust “freely providing resources and artwork”. He says this has led to programmes in Australia and Canada “swapping ideas” with the trust, and him and Brittany presenting their work at a breeding birds conference a few years ago in Australia.

Highlighting the importance of science and gathering data, the University of KZN researcher says that an “ex-NVT intern from Canada is now coordinating similar work on plovers over there”.

It’s exactly such data that informs us that the numbers of the starkly beautiful and once-threatened oystercatcher are recovering well. It is researched data that led to a ban on driving on the beach, which every coastal boet and his brother with a 4×4 were once doing.

“Oystercatchers are a wonderful conservation success story but I think it is important to keep your hand on the pulse… good numbers on a global or regional scale may not always equal the numbers on a smaller, more local scale and I sure want to make sure that ‘oyks’ [oystercatchers] are enjoyed locally by generations to come.”

Brittany and the NVT team collaborate with  BirdLife Plettenberg Bay on the NVT Birding Connect programme, which connects pupils with their environment and birding, who, it is hoped, share their knowledge with their parents and communities.

I’ve just been one of the lucky few exposed to so many opportunities to learn about the wonderful and intricate facets of the natural world.” DM/OBP