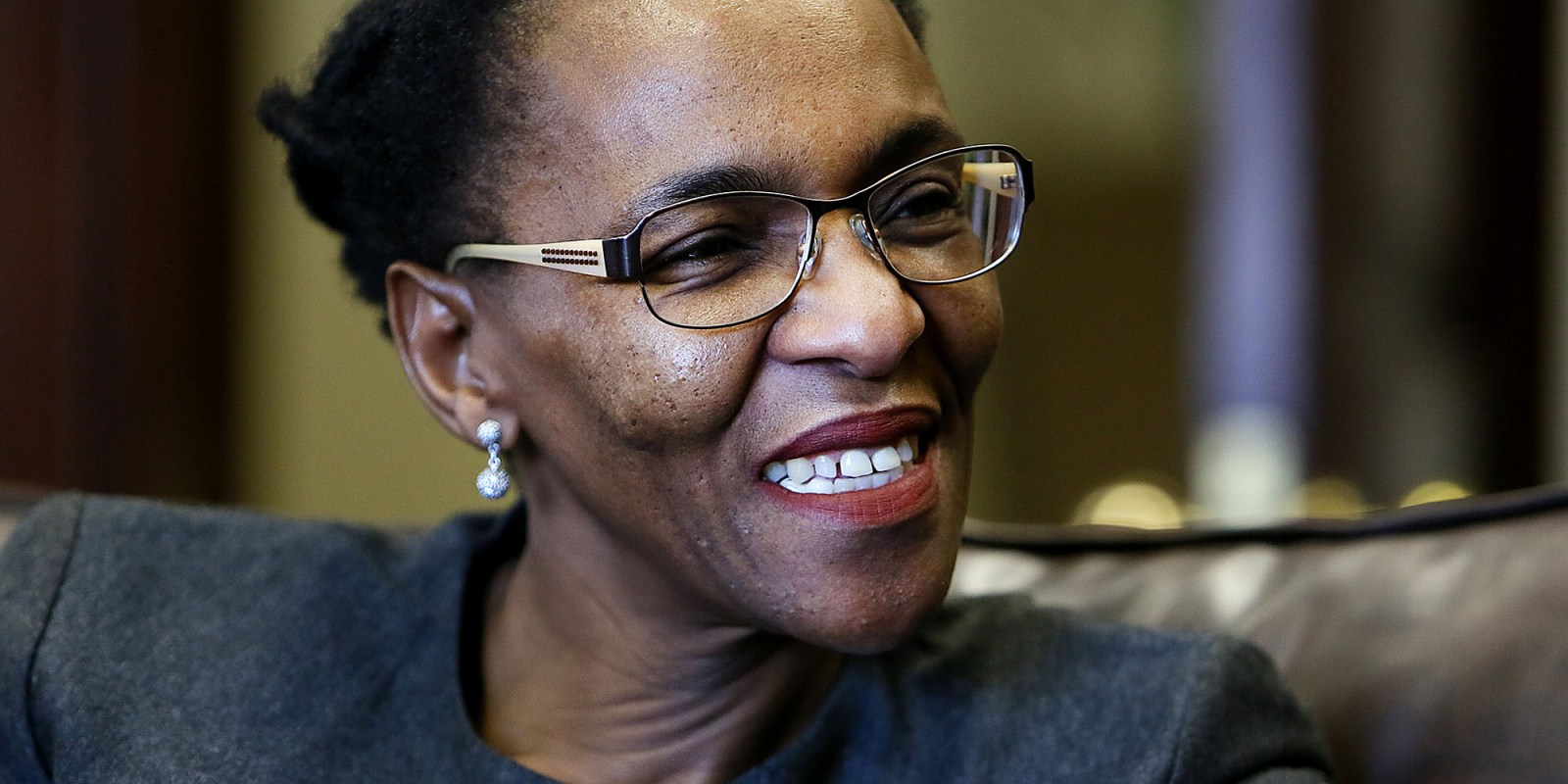 President of the Supreme Court of Appeal (SCA) Mandisa Maya opens up during an interview at her offices on August 04, 2017 in Bloemfontein, South Africa. (Photo: Gallo Images / Sunday Times / Alon Skuy)

The Judicial Service Commission is conducting interviews with the four judges being considered for appointment as Chief Justice of South Africa. Given the political grandstanding, manufactured outrage and populist sloganeering of some JSC commissioners at recent rounds of judicial interviews, I am expecting the worst, while hoping for the best. As we watch and wait, I consider some of the factors that might influence President Cyril Ramaphosa’s decision on who to appoint as Chief Justice.

From a purely legal perspective, the Judicial Service Commission (JSC) interviews this week are of minor importance as any endorsement or recommendation it might make will not be binding on President Cyril Ramaphosa. In terms of section 174(3) of the Constitution, the president is required to consult the JSC and the leaders of parties represented in the National Assembly before making an appointment, but he is not bound by their advice.

For example, if the JSC recommends that candidate X should not be appointed, the president is legally entitled to ignore that advice and appoint candidate X as Chief Justice. (Of course, whether this would be wise or politically feasible is another question that may depend on the facts of a particular case.)

What then are the factors that President Ramaphosa ought to consider when making his decision? In a very useful submission to the JSC, my colleagues from the Democratic Governance Rights Unit’s (DGRU) Judges Matter unit argue that a potential Chief Justice must possess a wide range of qualities and attributes, making the important point that the Chief Justice does not only serve as the head of the Constitutional Court but also as the head of the entire judiciary.

The DGRU lists several qualities and attributes that ought to be considered when selecting a Chief Justice. They argue (and I agree) that a Chief Justice must be able to provide intellectual leadership, must have excellent administrative skills, must be a person of the highest integrity with high ethical standards, must have strong communication skills, must show independence of mind, and must have the appropriate judicial temperament. Elaborating on the latter requirement, the DGRU states:

“The importance of the role means that the Chief Justice can be expected to be subjected to consistent and often intense scrutiny. They must therefore be thick-skinned and able to handle pressure and criticism in a way that protects the integrity of the judiciary. In an ever-changing environment where every utterance by public figures is amplified by social media, and in which the judiciary continues to come under fierce (if frequently unsubstantiated) criticism, it is vital that the Chief Justice has a strong personality and is agile in responding to quickly developing challenges confronting the judiciary.”

I have previously noted that there were signs towards the end of Mogoeng Mogoeng’s term as Chief Justice that the Constitutional Court and its role were not being managed as efficiently as it could, leading to the need to correct some judgments after they were handed down, as well as to long delays in the handing down of several judgments. In this context, the need to appoint a Chief Justice with excellent administrative skills requires specific consideration.

Apart from the personal qualities and attributes listed above, the DGRU also highlights the importance of what it calls “diversity”. It is important to recall that section 174(2) of the Constitution imposes an obligation on the president to consider the “need for the judiciary to reflect broadly the racial and gender composition of South Africa” when making any appointment to the judiciary.

The fact that only two of the 14 superior courts are presently headed by women permanently appointed to that position, and that no woman has ever been appointed as Chief Justice in South Africa, may well become a significant (but of course not only) factor in selecting a new Chief Justice.

I would add an additional set of considerations that I believe should play a pivotal role in the selection of a Chief Justice (as well as the appointment of other justices of the Constitutional Court). I would argue that it is important to consider the particular candidate’s values and world view, and their views on the appropriate role of the law in effecting social and economic change.

For example, I would prefer the appointment of a Chief Justice whose judgments demonstrate genuine concern for those who are marginalised or rendered vulnerable because of their race, gender, sexuality, lack of access to resources or other factors; who is alert to the ways in which legal rules tend to protect elite interests; and who has the necessary legal skills to utilise the (limited) tools provided by the Constitution to develop principled, strategic, and legally persuasive strategies to counter elite interests.

There is potentially another factor that may influence President Ramaphosa’s decision, namely how long the new Chief Justice will be able to remain in office and whether it is important to appoint somebody who will serve for a relatively long time. Deputy Chief Justice Raymond Zondo is due to retire in August 2024 and Justice Mbuyiseli Madlanga in July 2025, while Supreme Court of Appeal (SCA) President Mandisa Maya and Judge President Dunstan Mlambo would both be able to serve much longer terms if appointed as they are not currently serving on the Constitutional Court and have therefore not yet served any part of their normal fixed 12-year term.

In recent decades in the United States, the age of nominees to the US Supreme Court has become a major consideration (Supreme Court justices serve for life), with presidents tending to nominate younger candidates to limit the possibility that a president from the opposing party will be able to nominate justices to the court.

Up until now, this has not been a factor in South Africa (as justices on the Constitutional Court usually serve for a fixed 12-year term). But given the possibility that Ramaphosa might not serve a second term as president of South Africa, or that the ANC might fail to win an outright majority at the next election and Ramaphosa might be forced to head a coalition government in which coalition partners may insist on having a say in the selection of a new Chief Justice, this might now have become at least a minor consideration.

As I write this, I have not watched any part of the current JSC interviews, so it is impossible to say whether the interviews will influence Ramaphosa’s decision and if so, how.

But on paper, the four judges being interviewed this week — Constitutional Court Justice Mbuyiseli Madlanga, Deputy Chief Justice Raymond Zondo, Supreme Court of Appeal (SCA) President Mandisa Maya, and Judge President Dunstan Mlambo — are all credible candidates for appointment to the position of Chief Justice. Ideally, the JSC interviews will provide more clarity on the strengths and weaknesses of each candidate. Sadly, I am not that optimistic that it will.

Whatever happens at the interviews, one further aspect that may have a bearing on this week’s proceedings should be mentioned.

Because he chairs the Commission of Inquiry into State Capture, Deputy Chief Justice Raymond Zondo may well face criticism for the commission’s handling of former president Jacob Zuma. I think it is important that JSC commissioners vigorously probe Deputy Chief Justice Zondo about this matter, not because the commission treated Zuma unfairly, but because it treated him better than others.

In Secretary of the Judicial Commission of Inquiry into Allegations of State Capture, Corruption and Fraud in the Public Sector including Organs of State v Zuma (the Constitutional Court judgment in which it originally held Zuma in contempt), Justice Chris Jafta described the commission’s handling of the matter as “maladroit”, complaining that:

“Despite the constitutional injunction of equal protection and benefit of the law, of which the Commission was aware, for reasons that have not been explained the Commission treated the respondent [Zuma] differently and with what I could call a measure of deference. He was only subjected to compulsion by summons when it was too late in the day… Had the Commission acted diligently and in accordance with the relevant law, the present situation could have been avoided.”

It is notable that Justice Jafta subsequently joined Justice Leona Theron in dissenting from the majority judgment sentencing Zuma to a term of imprisonment for his contempt of the original court order. Many of those who championed this minority decision seemed to have willed Justice Jafta’s previous findings out of existence.

It will therefore be interesting to see if any of the JSC commissioners raise the commission’s treatment of Zuma during DCJ Zondo’s interview, and if they do, whether they will mention the Constitutional Court’s previous criticism of the preferential treatment given to Zuma. DM