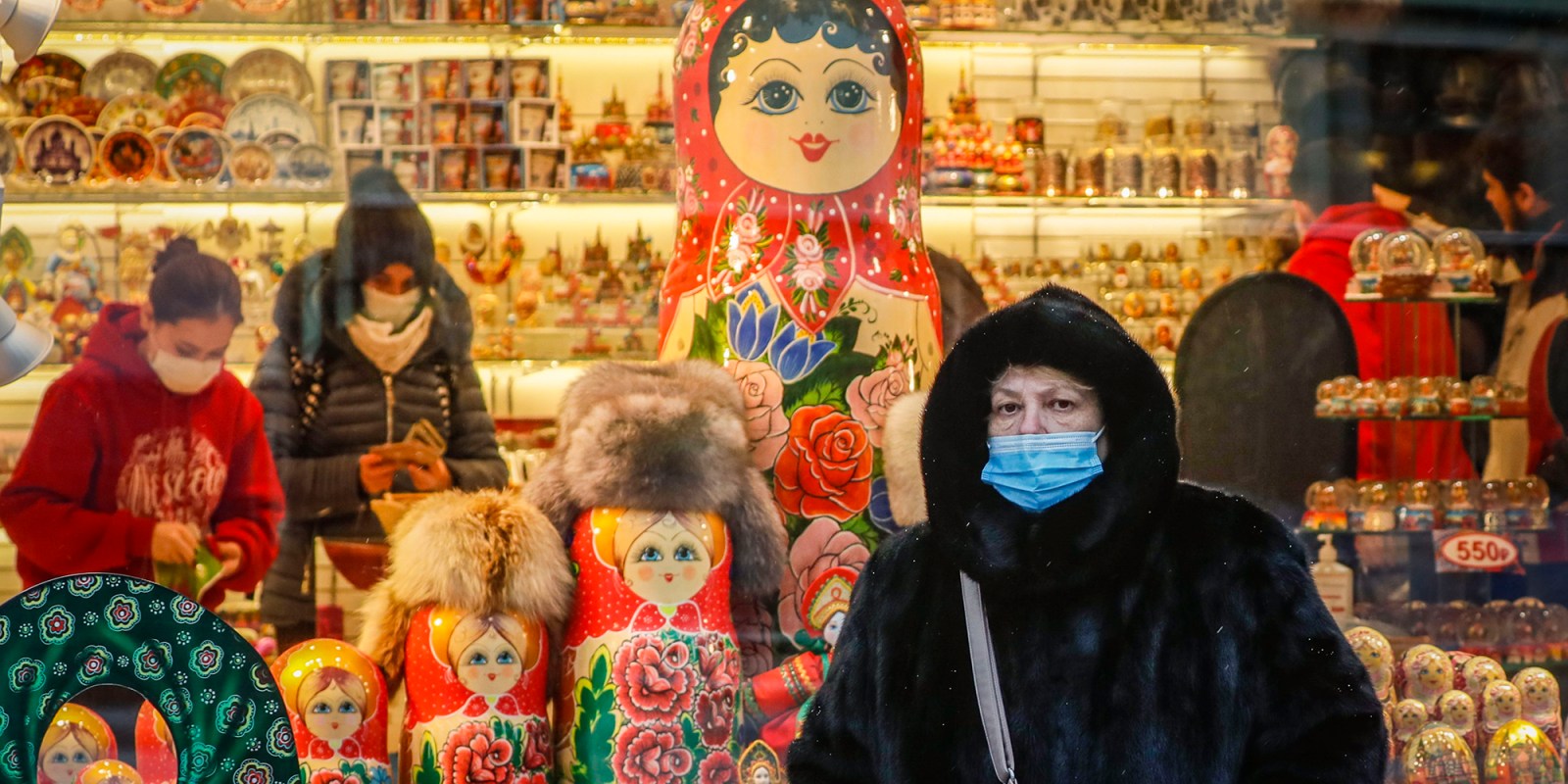 A Russian woman outside a gift shop in Moscow on 31 January 2022. According to the national coronavirus information centre, over the past 24 hours a record 124,070 coronavirus cases have been detected in Russia. (Photo: EPA-EFE/Yuri Kochetkov)

Moderna’s Covid-19 vaccine received full approval from the US Food and Drug Administration for people 18 and older, an important milestone that bolsters the shot’s use as a major weapon against the virus.

Joe Rogan pledged more balance and better research for his podcast, seeking to quell growing controversy about misleading coronavirus information that led Neil Young and other artists to leave the streaming service Spotify.

Canadian Prime Minister Justin Trudeau said he has tested positive for Covid-19, while in China the number of infections among athletes and team members in Beijing for the Winter Olympics continues to grow as the Games draw near, at an even faster clip than the Tokyo Games last summer. 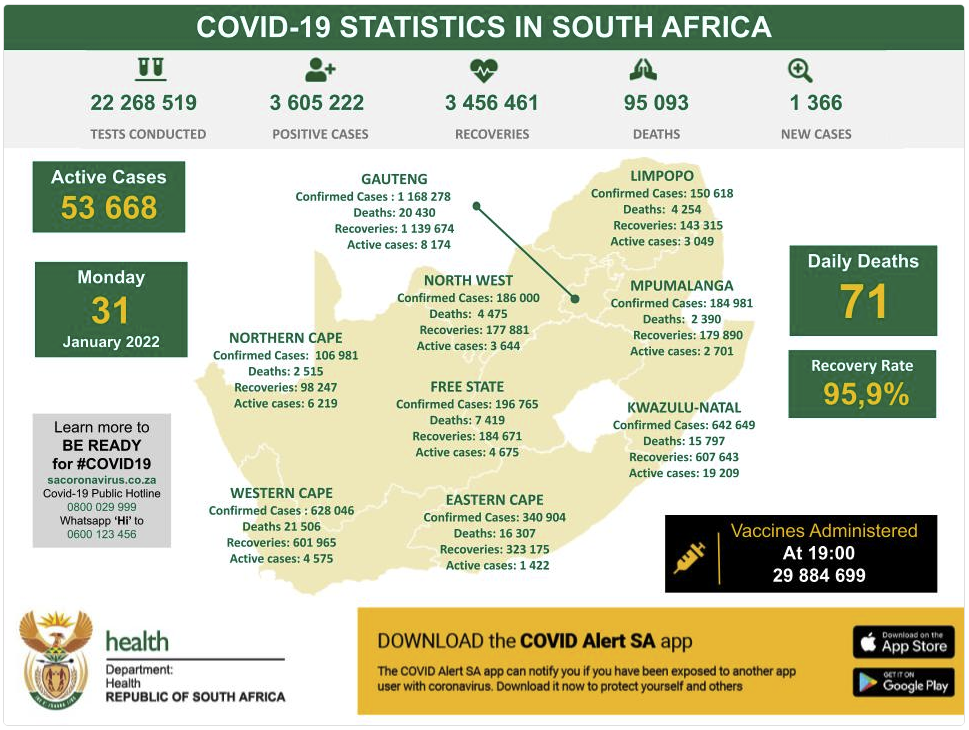 Moderna vaccine gets full US approval

Moderna’s vaccine for Covid-19 has received full approval from the US Food and Drug Administration for people 18 and older, an important milestone that bolsters the shot’s use as a major weapon against the virus.

The vaccine, which goes by the brand name Spikevax, had previously been available to adults in the US under an emergency-use authorisation from the FDA. But the full clearance lets Moderna market the vaccine to adults with the full imprimatur of the FDA.

Moderna shares climbed 2.8% to $163.93. The company began its rolling submission for the approval last June. Pfizer has the only other fully authorised vaccine in the US, cleared by the FDA in August.

Canadian Prime Minister Justin Trudeau said he has tested positive for Covid-19, four days after going into isolation because one of his children contracted the virus.

Joe Rogan said in an Instagram video that “If I’ve p***ed you off, I’m sorry”, and that he’d work harder to research particularly controversial topics.

Folk singers Neil Young and Joni Mitchell pulled their music from Spotify last week in protest against Rogan, who has hosted several outspoken sceptics of the Covid-19 vaccines.

The Election Commission of India has extended a ban on roadshows and processions until 11 February in five poll-bound states. As many as 1,000 people will be permitted physical public meetings in open spaces.

Voting in Uttar Pradesh, the country’s most populous and politically crucial state, along with four other states, will start on 10 February. India has witnessed a decline in daily cases in the past few days. It recorded about 209,000 new infections in a single day on Monday.

Romania cuts back on quarantine

Romania will change the quarantine rules and lower the isolation period to five days from 10 for unvaccinated people who were in direct contact with a confirmed case. It will also introduce the mandatory green certificate for everyone entering the country, regardless of the area from which they came.

People without the certificate will be sent into quarantine.

Spain has included the cost of masks in its list of articles to gauge inflation, in the latest example of the far-reaching impact of the pandemic.

The consumer price index basket is revised periodically and updated to “include new products whose consumption starts to be significant”, the national statistics institute said.

China has temporarily banned meat from Teys Australia’s Naracoorte facility, the latest in a string of import halts from Australia in two years as authorities in Beijing increase scrutiny of overseas processing plants.

The ban follows a Covid outbreak at the processing plant which sparked controversy after workers were told they should still come to work even if infected with the virus, unless their symptoms rendered them too unwell. The company, which is part-owned by US agricultural giant Cargill, backed down from the mandate following a backlash.

As residents prepare for another Chinese New Year under Covid-19 restrictions, Omicron seems to have got the better of the city’s defences, with a record number of new and untraceable infections.

“The horse has bolted, and I don’t think that the government is going to be able to get on top of this,” said David Owens, a family medicine specialist and honorary clinical assistant professor at the University of Hong Kong, where he has collaborated on Covid research. “This disease is just too transmissible.”

Chief executive Carrie Lam is unlikely to give up completely on efforts to eradicate the virus while Chinese President Xi Jinping adheres to that policy in the mainland, but her government can’t deploy the blunt tools that China has used to lock down millions of people in cities like Xi’an and Tianjin.

Kishida inspected a military-run vaccination centre on Monday, ahead of a push to get boosters to the public, as a survey published by the Nikkei newspaper showed his support had dropped six percentage points to 59%. It was the first fall since he took office in October.

The premier said he’s not considering declaring a Covid-19 State of Emergency in Tokyo right now, even as cases jump and the hospital bed occupancy rate climbs. The capital currently is under a quasi-emergency state that calls on places such as eateries and bars to close early and limit alcohol sales.

China reported a combined 12 Covid infections among Olympic athletes and team officials arriving via the airport and in a “closed-loop” system on Sunday, according to the Beijing Organising Committee for the Olympics.

There were also 25 other infections involving “stakeholders,” which include broadcasting staffers, members of international federations, marketing partners’ personnel, Olympic and Paralympic family members and media and workforce staff members.

Combined Covid infections among those involved with the Winter Olympics are now at 248 since January 4, according to a Bloomberg calculation based on official data.

Local regulatory officials and supply chain company management failed to do in-depth inspection of the chain and failed to recognise illegal storage of cold food imports at facilities in the districts of Fangshan and Fengtai, according to a statement published on the Central Commission for Discipline Inspection website late on Sunday.

China reported 40 local confirmed Covid-19 cases on January 30, with 24 cases in Zhejiang province, 11 in Tianjin and three in Beijing, according to the National Health Commission.

Hong Kong denied that criticism of the city’s strict policy to push for zero Covid-19 cases is illegal under a sweeping national security law that has silenced dissent in the former British colony.

“Making general remarks and discussion is not illegal,” a government spokesman said on Sunday.

The national security law, imposed by Beijing in June 2020, has since been used to target opposition lawmakers, journalists and activists who opposed the city’s government. The content covered under the law is unclear, with certain political slogans banned after its implementation.

“In line with ministry of health guidance she is required to continue isolating until the end of Tuesday, February 1, or as otherwise advised by Public Health,” a spokesperson said, adding that Jacinda Ardern will remotely chair a Tuesday cabinet meeting.

The prime minister began self-isolating last week after being deemed a close contact of a positive Covid-19 case on 22 January during a flight from Kerikeri to Auckland, according to her office. DM/MC

— With assistance from Reed Stevenson