Suspected arsonist says he won’t run away and has nowhere to hide, court rules video footage inadmissible as evidence in bail hearing 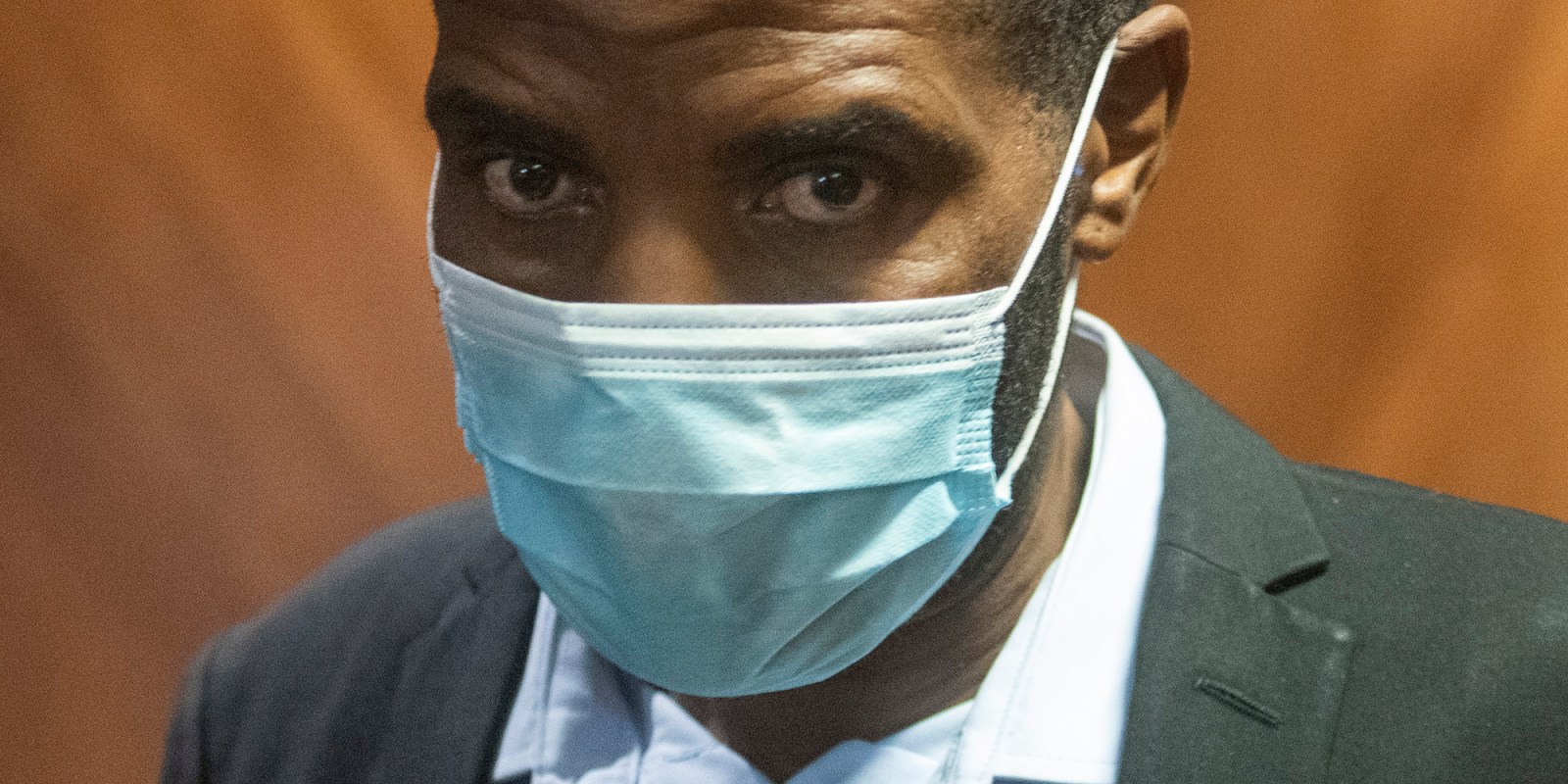 A decision by the Cape Town Regional Court has denied the State the use of video footage as evidence showing how, when and with what the suspected arsonist allegedly set Parliament alight.

This was part of the drama that unfolded during an eight-hour bail application hearing of suspected arsonist Zandile Christmas Mafe, 49, heard at Cape Town Regional Court on Saturday, 29 January 2022.

The decision not to allow the State to show the video and use it as evidence in arguments for opposing bail to Mafe, was made by Magistrate Michelle Adams.

Mafe is facing charges of housebreaking with the intent to commit terrorism and arson, terrorism alternatively delivery, placement, discharge or detonation of an explosive or lethal device and arson.

The charges relate to a fire that ripped through Parliament in the early hours of Sunday, 2 January 2022, which caused widespread damage to both the Old and New Assembly buildings. If convicted on the terrorism count, Mafe faces the prospect of life imprisonement.

Prosecutor Mervyn Menigo argued that the purpose of using the video footage as evidence was to solidify the State’s case, prove that the right person has been arrested and charged, and to refute the perception that the State has a weak case.

Mafe’s senior counsel, Dali Mpofu, in his objection told the court: “The video footage has not yet been authenticated. The footage could be prejudicial and be in dispute at a later stage.”

From the onset the defence emphasised it is a bail hearing, not a trial and hence should not venture into the merits of the case. The defence focus point was to adduce evidence in terms of section 60 (11) of the Criminal Procedure Act, 51 0f 1977, which satisfied the court that exceptional circumstances exist which in the interests of justice permit his release.

This is why when Mafe took the stand he told the court: “I’m not guilty and I will not discuss the merit of the case because this is my bail application.”

It is the first time since Mafe’s incarceration on 2 January 2022 that the accused stepped into the dock and gave the court insight into where he grew up, his schooling and personal circumstances.

Through an interpreter Mafe confirmed his signature and the content of the affidavit handed in by his legal team, his identity, that he grew up in Mahikeng, completed Grade 8 and is fluent in English, Afrikaans, Tswana and Xhosa.

It also became apparent that Mafe had a speech impediment.

“I stuttered from a very young age at school. I don’t have a problem when I’m reading, only when I’m talking,” he said.

Asked by Mpofu whether this impediment meant there was something mentally wrong with him, he replied: “Me stuttering doesn’t mean that I’m mentally ill.”

This question is in line with an assessment made by Dr Zelda van Tonder on 3 January 2022, diagnosing the accused as paranoid schizophrenic.

Following this diagnosis Mafe was sent, on 11 January, to Valkenberg Hospital for 30 days’ mental observation. But this order was set aside by Judge President Judge John Hlophe in the Western Cape High Court on Tuesday, 18 January 2022. Hlophe found the order was unlawful and ordered Mafe’s release from Valkenberg Hospital.

The court also heard that in his quest to find a job, Mafe went to different places in search of work. Eventually, he ended up in Cape Town in 2014 and started working as a baker for Alpine Bakery until Valentine’s Day, 14 February 2018.

From then onwards he struggled to find a job and ended up working on the streets, helping people carry their groceries to their cars in Bellville and Cape Town.

Mafe said he made between R800 and R1,000 a month, of which he paid R450 rent for his shack in Site B in Khayelitsha, R100 for his DSTV and the rest on groceries and taxi fare.

Section 60 (4) of the Criminal Procedure Act, 1977, sets out the circumstances in which it would not be in the interests of justice to grant bail to an accused if there is a likelihood that he/she, if released on bail, will endanger the safety of the public, will attempt to evade his/her trial, will intimidate witnesses and his/her release will undermine the public peace or security.

Mafe said: “If I do get bail I will stay in Khayelitsha. I won’t run away. There is no way that I can hide because the State knows my addresses. I don’t know any witnesses. If I am released on bail I will obey all laws and rules.”

The questioning by the prosecution was centred on the affidavit of investigating officer, Colonel Christiaan Theron, which was obtained shortly after Mafe’s arrest.

In the affidavit Mafe allegedly admitted he set Parliament alight because he wanted a R1,500 social grant for all unemployed people to be rolled out, the State of the Nation Adress scheduled for Thursday, 10 February 2022 to be cancelled and that convicted murderer Janusz Waluś be released from prison on 11 February, the date that the late former President Nelson Mandela was freed from Robben Island.

In the affidavit Mafe also averred that SAPS members accused him of causing the fire at Parliament.

“A white man told me I will be sentenced to death for setting the Parliament alight. I was horrified and cooperated with SAPS. Empty promises were made by the white man and I was not released and still in custody,” his affidavit read.

Mafe refused to answer questions relating to this affidavit, saying “I will not answer on the merit of the case and will wait once it gets to trial.”

Menigo also informed the court that the alleged confession made by Mafe will not be read into the record at this stage. Dali’s objection in this instance is that the admissibility of confessions must still be determined by trial court.

Western Cape National Prosecuting Authority spokesperson Eric Ntabazalila reiterated the State’s position that it is not in the interests of justice for Mafe to be released on bail:

“He is a danger to society and to himself. His release will cause an uproar. The State also argued that the defence has failed dismally because the onus was on the defence to adduce evidence for Mafe’s release in terms of a Schedule 6 offense. There was nothing exceptional in what he asked for.”

The NPA, he underlined, hopes that come Friday, 4 February 2022, that Mafe will be denied bail. He added the State does have a very strong case against the accused.

“The State argued that the video must be shown and it was going to show the strength of our case. Unfortunately, the Magistrate saw differently. The NPA accepted the decision of the court, but we argued enough to show the accused does not deserve to be released on bail.”

On the issue of more people to be arrested in connection with Parliament’s fire, Ntabazalila explained that: “Investigators are analysing the accused’s phone, one of the things to check if he was alone or other people might have urged him to be involved. We also checked whether fuel was on his clothing,” Ntabazalila said.