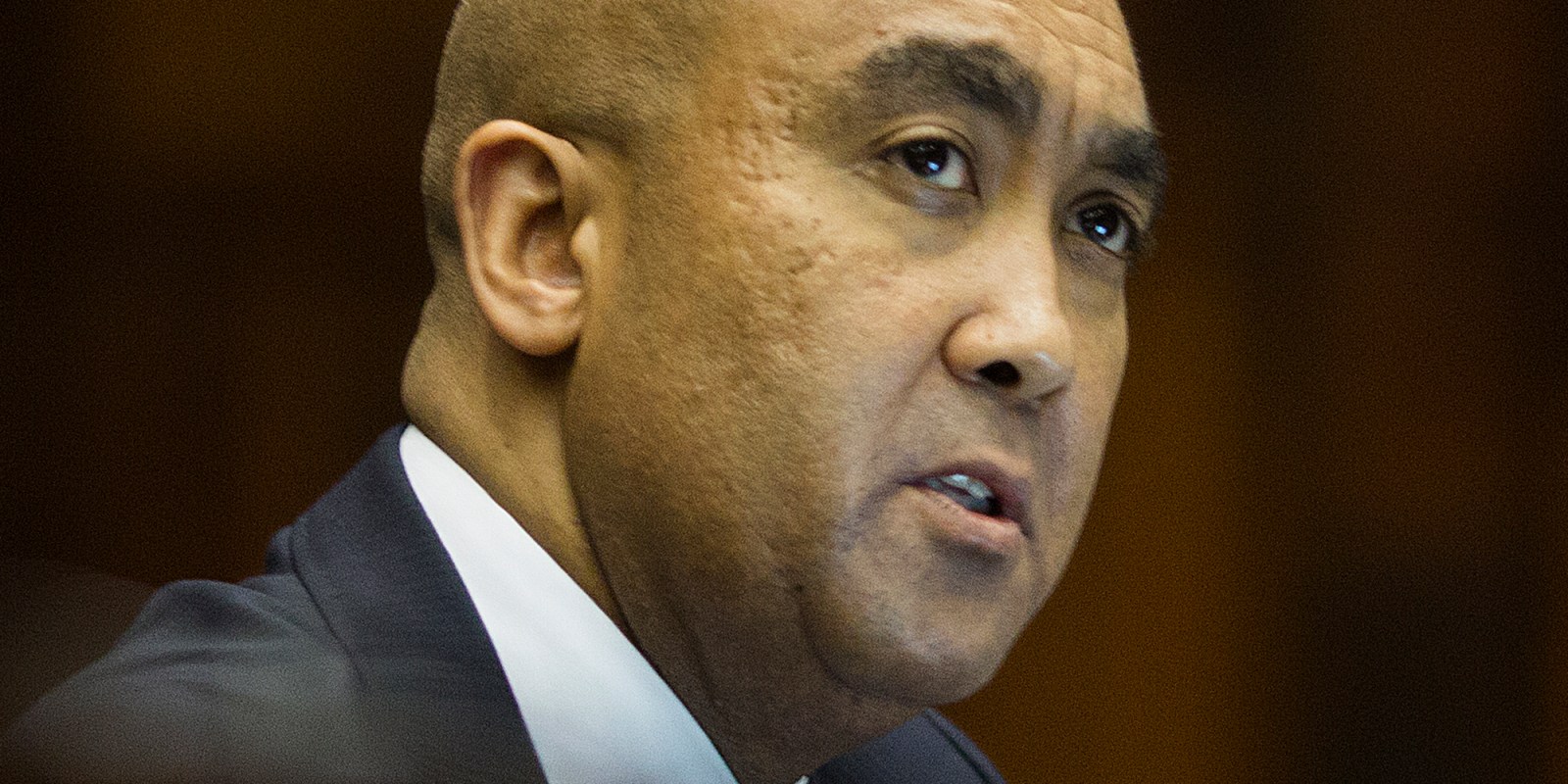 Abrahams, who, since he was dropped as the national prosecuting boss in South Africa has had a not very successful stint prosecuting in Botswana, was brought in to help the prosecuting authorities in Lesotho with a series of high-profile, politically sensitive murder and treason cases.

Controversial advocate Shaun Abrahams, forced from his top prosecution job in South Africa, has been hauled over the coals by Lesotho’s Chief Justice Sakoane Sakoane for his behaviour in a bitterly contested trial, and has been barred from further participation in the matter.

Abrahams, who, since he was dropped as the national prosecuting boss in SA has had a not very successful stint prosecuting in Botswana, was brought in to help the prosecuting authorities in Lesotho with a series of high-profile, politically sensitive murder and treason cases.

The case from which he has now been barred involves Lesotho’s former army commander Lieutenant-General Kennedy Kamoli and five others, charged with treason, murder and assault.

In essence, the problem was that Abrahams was absent from the trial, with no explanation, when he should have attended on 10 January, even though the date was arranged a couple of weeks earlier with all counsel involved.

Before finalising the dates, the Chief Justice repeatedly made clear that he would not allow postponements because the accused had already spent five years in prison waiting for the trial to start. And he cited the Speedy Court Trials Act in terms of which an entire case could be “dismissed” by the court if the presiding judge found either side responsible for consistent and unwarranted delays.

That same law also says that a prosecutor who causes delays by “double booking” — not appearing in court for one matter because of appearing in a second case — can be barred from court, a sanction that the Chief Justice has now imposed on Abrahams because of his “no-show” on 10 January.

In response to that decision and the Chief Justice’s handling of the matter, the Director of Public Prosecutions (DPP) brought an application for the Chief Justice to recuse himself from the case, saying it appeared that he was biased against the prosecution.

The Chief Justice decided that recusal application this week, with a judgment scathingly critical of both Abrahams and the DPP, Hlalefang Mary Motinyane.

He referred to the sitting of the court in December 2021, when he, as presiding officer in the matter, said he would be prepared to continue the trial during January vacation days, given the “inordinately long time” that the accused had been waiting, in prison, for the case to start. When counsel responded, indicating when in January they would be available, Abrahams said he already had another case during January, in South Africa.

In his judgment on subsequent events, the Chief Justice said that at this point, the court (meaning himself) told Abrahams he “had to make [a] choice in the matter”.

Eventually, all counsel involved agreed that the trial would run from 10-21 January. However, when the case was called on the agreed date, a series of events took place that culminated in the recusal application.

“Incidents of bias,” she said, had “actually manifested themselves”, and the public understood that even the application for the Chief Justice’s recusal was a “sham”, which the Chief Justice would dismiss, and then proceed “as if nothing has happened”.

The Chief Justice said when he pointed out the implications of the Speedy Court Trials Act, and the possible sanctions that could apply, counsel backed off from his intended postponement application.

Then there was a delay while the second prosecution counsel, Naki Nku, obtained a brief from the DPP to take over as lead counsel and start the case. After some further technicalities, the case was postponed to 17 January.

On that day, Abrahams was back, and said he would once again be leading the prosecution. However, the Chief Justice decided that he should make inquiries under the section of the Speedy Court Trials Act, providing that an offending prosecutor may be denied the right to appear before the court for up to 90 days. He called for the DPP herself to appear and explain why it was that Abrahams had returned, given her earlier affidavit that Abrahams was not available to prosecute, and the appearance of two other prosecutors in his absence.

The Chief Justice then called Abrahams, who said he disagreed with the DPP’s affidavit that he had agreed with her to withdraw from the case in SA.

The Chief Justice closely examined the court record and concluded that the DPP’s affidavits were “peppered with hearsay, distortions and misinformation”.

He said that during the December discussions with counsel about the dates for the trial to run in January, Abrahams “committed to the trial dates [knowing] that double-booking is a sanctionable professional misconduct”. He also criticised the DPP’s contention that she and Abrahams had agreed the trial would go ahead without him until 17 January.

The purpose of that contention, said the Chief Justice, “was to let Abrahams leave the case for a week and thereafter reappear in this court under the pretext that he never left the brief”. And when he did reappear in court on 17 January, he “did not bother” to explain his absence.

The behaviour of both Abrahams and the DPP, he said, “shows the cavalier manner in which they treat this court. Their behaviour as officers of the court is completely unacceptable.”

In the tongue-lashing that followed, the Chief Justice laid out the expected standards of behaviour which, he said, the DPP and Abrahams had failed to meet.

He also challenged the DPP’s contention that a court, while it was allowed to conduct an inquiry “if a prosecutor seeks to postpone a matter on the basis of falsehoods and to impose sanctions”, was not allowed to “expel my lawyer from this case”.

The Chief Justice said this showed the ignorance of the DPP about the powers that courts could exercise “over errant prosecutors”.

The law said that a prosecutor “who seeks to postpone a criminal trial by providing false and misleading information or double-booking should be sanctioned”, and one possible sanction was to deny the prosecutor the right to practise or appear in court for up to 90 days.

A prosecutor who sought a postponement on the basis of a knowingly false statement could also be denied the right of appearance, said the Chief Justice.

Unbeknown to the court and the defence team, Abrahams and the DPP had an agreement “that he can come back to the case any time his business was finished in SA”.

“In my judgment, Abrahams supplied information to the DPP to prepare and file an application whose purpose was to seek a postponement to delay the trial.”

Both knew the trial was set for 10-21 January “and yet they helped each other in an effort to have it postponed to new dates that would suit Abrahams’ comeback, to the detriment of a speedy trial.

“No regard was had to the court and the plight of accused persons who have been in custody waiting for their day in court.”

No one who knew these details could suspect bias when the court denied Abrahams the right to appear and prosecute the case, said the Chief Justice. Abrahams did not distance himself from what the DPP said about him in the affidavit for postponement and thus he failed, by association, in his legal and ethical obligations.

Similarly, the DPP had failed in her “legal and ethical duty to the truth”. She had power to retain outside counsel, but in exercising that power, there was no need to “retain counsel who engages in double-booking”.

The Chief Justice was also critical of the DPP for making allegations about his actions in her affidavit even though she had not been in court to see for herself what had happened.

Any fair-minded person “understands that a trial such as this which has taken close to five years to commence cannot be stalled by the type of behaviour of the DPP and [Abrahams]”.

His imposing sanctions on Abrahams did not show bias against the prosecution. There were others who could do the job, including Nku, appointed to lead the prosecution in the absence of Abrahams.

“A criminal court cannot be at the mercy of prosecutors who abandon a criminal case without leave of the court. If they want to rejoin a prosecution at the pleasure of the DPP, a truthful explanation must be given to the court.”

Ironically, Abrahams resigned from his job with the prosecution in Lesotho during September 2021, because he hadn’t been paid. When he announced in court that he was standing down from the cases, the DPP asked the court to let her attempt to persuade him to stay.

He accepted the job in Lesotho, and before that, a post in Botswana, after SA’s Constitutional Court found that Abrahams’ predecessor as head of the National Prosecuting Authority, Mxolisi Nxasana, had been unlawfully removed by former president Jacob Zuma. Abrahams’ own appointment by Zuma to that position was thus also invalid. DM