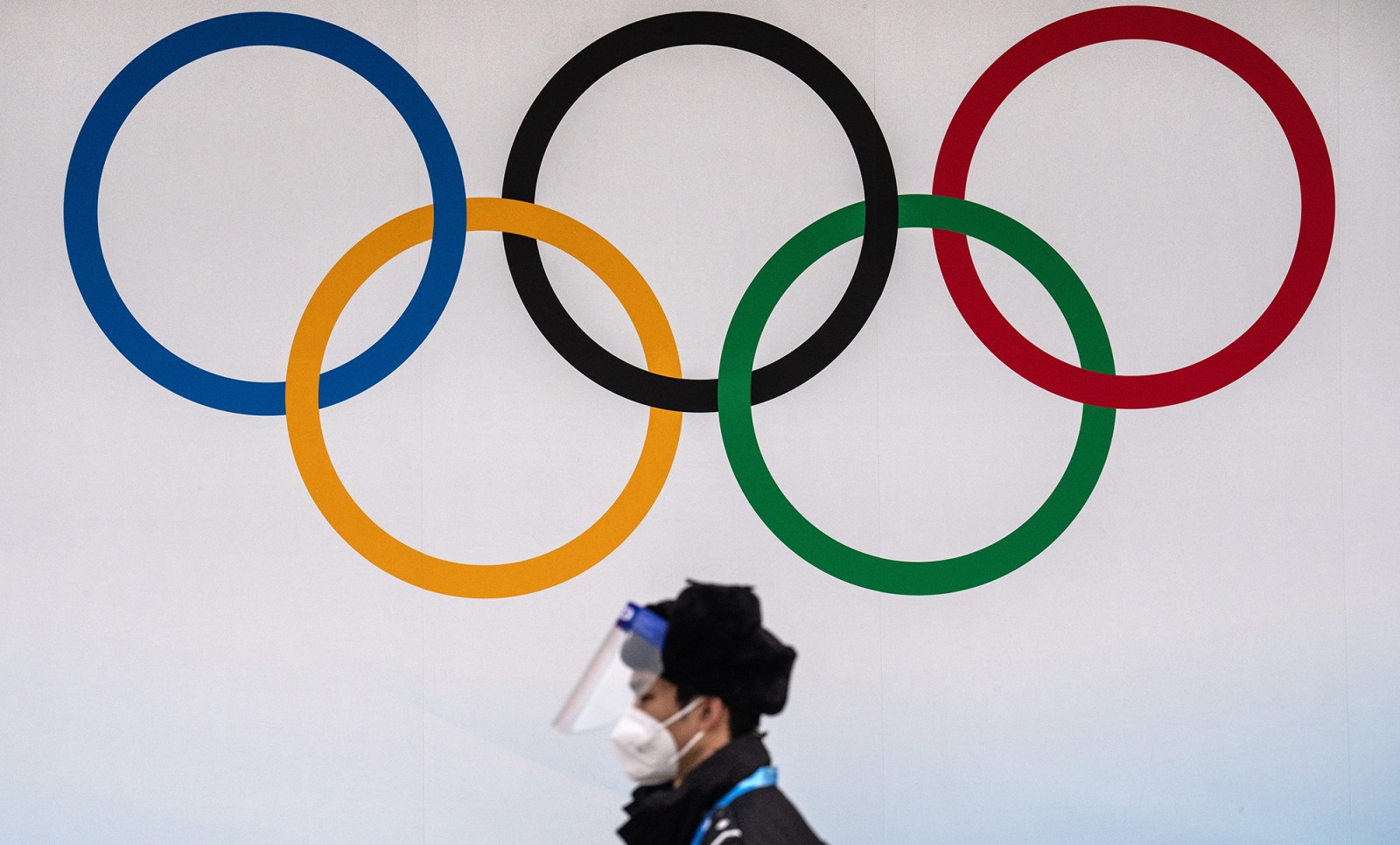 A security official wearing a face mask and protective plastic visor walks past the Olympic Rings at the National Aquatic Centre in Beijing, China on 30 January 2022. With less than a week to go until the opening ceremony of the Beijing 2022 Winter Olympics, Chinese authorities are making final preparations to try to ensure a successful Games amid the continuing Covid-19 coronavirus pandemic. (Photo: Carl Court / Getty Images)

The number of infections among athletes and team members in Beijing for the Winter Olympics continues to grow as the Games draw near, with an additional 16 cases reported on Sunday.

Germany’s finance minister said the government should prepare to loosen restrictions, with business groups needing to plan for events including trade fairs. In Turkey, the health minister said the virus had weakened, comparing the death rate to that of the flu.

More than 10% of Iran’s Parliament has tested positive in the past two days, the semi-official Fars news agency reported.

The Omicron subvariant, BA.2, appears to be more contagious but data so far do not show it’s more dangerous or that it evades protection from vaccines, said Scott Gottlieb, the former commissioner of the US Food and Drug Administration.

At worst, the strain could slow down the decline in Omicron infections in the US, Gottlieb, a Pfizer board member, said on CBS’s Face the Nation. The subvariant has been found in small numbers in about half of US states.

Restrictions to curb the spread of the Omicron variant meant British business had its slowest growth since the first quarter of 2021, according to the Confederation of British Industry. Although many sectors are bouncing back from the depths of the crisis, the survey found that consumer services businesses expect activity to fall further.

Those businesses “will also have to contend with a deepening squeeze on household budgets, as rising energy prices and, more broadly, higher inflation start to bite”, said the lobby group’s chief economist, Alpesh Paleja.

Germany urged to prepare for reopening

German Finance Minister Christian Lindner said the government should prepare the ground for a loosening of coronavirus restrictions. While the peak of the current wave may still be weeks away, business sectors like trade fairs and events require a “planning horizon”, Lindner said in an interview with Der Spiegel.

Recent measures have focused on reducing social contacts and limiting access to public spaces for those who haven’t been vaccinated. The country reported 118,970 new infections on Sunday and the seven-day incidence rate reached a record of 1,156.8 per 100,000 people.

Turkish Health Minister Fahrettin Koca urged citizens to no longer be afraid of Covid-19, claiming that death figures aren’t different from the seasonal flu and related diseases. “The sickness is not as strong as it used to be, do not worry,” Koca said on Twitter. Daily reported infections surged to a record 94,783 on January 28.

Hong Kong reported 81 new Covid-19 cases on Sunday, four of which were imported and 15 with no known linked source, according to a briefing by the city’s health officials. More than 70 preliminary cases were also found. On Saturday, 120 cases were reported, including 34 imported due to flight arrivals.

Thirty Iranian lawmakers, accounting for more than 10% of the country’s parliamentary seats, tested positive for Covid-19 over the past two days, the semi-official Fars news agency reported. The country has seen a sharp increase in infections, surging to nearly 11,000 new cases a day in the past week, up from about 1,402 a day in early January.

Swiss Health Minister Alain Berset is seeking a “turbo” reopening of the Swiss economy next month, according to SonntagsZeitung. On Wednesday, Berset asked the Swiss Federal Council to lift the country’s Covid-19 restrictions — including the work-from-home requirement and the obligation to show a vaccination certificate. The reopening process could begin as soon as February 16, the report said.

Infections rise ahead of Olympics

China on Sunday reported another 34 Covid infections among people involved in the Winter Olympics, including 16 athletes or team members, the Beijing Organising Committee for the Olympics said. The number of infections among the teams has increased since the first reported case less than a week ago on 24 January, with 19 new cases reported on Saturday.

There is also evidence that the virus has penetrated the “closed-loop” system that the organisers of the Games established to keep the pathogen out. There were 11 infections reported on Sunday from within the Beijing bubble, including three athletes or team members. The other 23 cases were found among incoming air travellers involved in the Games.

The other infections come from a stakeholders’ category that includes media, marketing personnel, members of the international federations, staff and family members.

The Philippines will ease movement restrictions in its capital from 1 February to 15 February because its Covid case count has declined from a record level. Outdoor businesses can operate at 70% capacity, while gyms and cinemas can open at half capacity in metro Manila, which accounts for one third of the nation’s economic output.

South Korea saw a further decline in critical Covid-19 patients in its hospitals. Some 277 critical patients were reported on Sunday, down from 431 one week ago, according to data from the Korea Disease Control and Prevention Agency. The authorities have warned that overall case numbers could still surge to new records in coming weeks.

The UK’s health service will start to vaccinate children between the ages of five and 11 who are most at risk of Covid-19, starting this week.

Children who are particularly vulnerable or who live with someone whose immune system is suppressed will be able to get their first dose, according to an NHS statement. Around 500,000 children will be eligible. DM/MC