A resolute SARB holds off the economic abyss of stagfla...

A resolute SARB holds off the economic abyss of stagflation 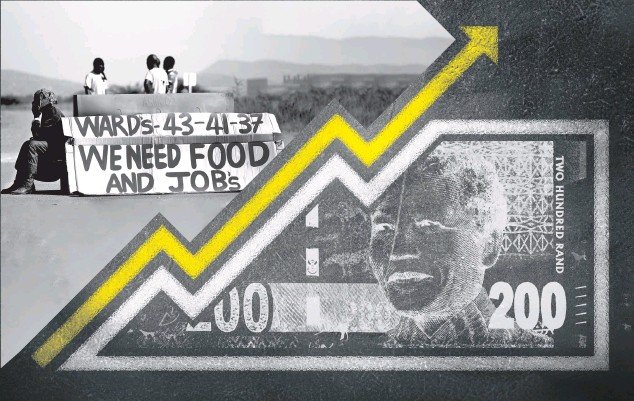 The Reserve Bank had no choice but to raise interest rates, despite the weak economy and the unemployment rate. The alternative would make an already awful situation intolerable.

The South African economy does not, on many levels, seem like the best candidate for the round of interest rate hikes the South African Reserve Bank (SARB) has signalled it is embarking on. The contrast with, say, the US, where the Federal Reserve is also expected to start hiking from March, is striking.

“… the [South African] economy is still quite weak. Employment is far from recovering, unlike in the US and elsewhere. Also unlike the US, there is little evidence of demand-led inflation. Inflation pressures instead stem largely from exogenous factors – global fuel and food prices and regulated utility tariffs,” Izak Odendaal, investment strategist at Old Mutual Wealth, said in a note this week.

South Africa’s official unemployment rate is at record levels of just below 35% and is over 46% based on a broader definition that includes the swelling ranks of discouraged job seekers. Economic growth remains lacklustre and, as Odendaal notes, accelerating inflation does not stem from demand pressures. If almost half of your working-age population has no job, demand for goods and services is going to be muted, at best.

Such a setting hardly provides a textbook case for raising rates.

Yet inflation has been picking up pace, which is why the Monetary Policy Committee (MPC) of the SARB on Thursday, 27 January raised its key repo rate by 25 basis points, taking the prime rate for consumers to 7.5%. This followed a 25-basis-point hike in November and more are on the cards this year as the SARB begins to unwind the 300 basis points’ worth of cuts it made in 2020 in response to the economic turmoil sparked by the onset of the pandemic and the stifling lockdowns to contain it.

In December, consumer inflation raced to an almost five-year high of 5.9%, almost the top of the SARB’s 3% to 6% target range. Meanwhile, data unveiled on 27 January by Statistics South Africa (Stats SA) shows factory gate price inflation hit 10.8% in December. This was the highest reading of the producer price index (PPI) since the measure was re-weighted a decade ago.

Fuel prices were the main driver here, a reflection of surging global oil prices, which recently scaled seven-year highs. Petrol prices for producers soared 47.4% in the year to December 2022, and diesel prices rose 45.5%. And producers will have to pass at least some of these costs on to consumers to remain in business.

“There is enough pressure on the supply side and production costs to compensate for the lack of demand,” PwC economist Dr Christie Viljoen told DM168.

This makes South Africa a prime candidate for stagflation, which is a key reason why monetary policy needs to be tightened. Stagflation refers to high inflation coinciding with high unemployment, sluggish growth and stagnant demand. South Africa is not there yet, but a case could be made that three out of the four ingredients are already in the mix. The jobless rate is almost 35%! Throw in rising price pressures largely unrelated to demand and you have a recipe in the making for stagflation.

One thing standing in the way of this catastrophic scenario is the SARB.

The SARB is an inflation-targeting central bank and its no-nonsense governor Lesetja Kganyago and his team take this mandate seriously. That’s probably no bad thing. Because, if inflation does accelerate well past its current levels, South Africa could fall into the economic abyss of stagflation.

That would make an already awful situation intolerable and among other things could stoke the flames of social unrest, which is not hard to do with the combustible material provided by South Africa’s glaring income disparities, sky-high poverty and unemployment levels. The July riots in Gauteng and KZN and the frequency of service delivery and other often violent protests stand as stark warnings in this regard.

Inflation takes its biggest toll on the poor and the working class, eating into the limited disposable income of such households and eroding the savings of those who do not have equity portfolios of some sort, which is the case of almost anyone with a job with a pension plan. Against the backdrop of high unemployment and slow economic growth, it can curb already limited demand even further in a vicious cycle that is hard to escape.

In its statement in which the most recent rate hike was announced, the MPC pointedly noted the exogenous factors fanning inflation.

“The risks to the inflation outlook are assessed to the upside. Global producer price and food price inflation continued to surprise higher in recent months and could do so again. Oil prices increased strongly through 2021 and are up sharply year to date. Current oil prices sit well above forecasted levels for this year.”

The SARB is also focused on the rand exchange rate. Its primary mandate after all “is to protect the value of the currency in the interest of balanced and sustainable economic growth”. And if the rand does tank, that would raise the upside risks of inflation as it simply makes the imports the economy depends on more costly.

With rates rising globally, notably in the US, the rand needs higher domestic rates.

“A particular risk arises from the possibility of a faster normalisation of global policy rates than is currently built into the forecast, which assumes some rate hikes to begin around June of 2022.

Added to this is the risk that quantitative tightening will occur more quickly than previously expected, leading to stronger capital flow reversals from riskier assets such as emerging market debt,” the MPC statement noted.

That in turn will put pressure on emerging market currencies such as the rand.

The price of the commodities that South Africa exports have also headed south, with some exceptions, at a time when the commodities it imports – notably oil – are trekking north. This is tipping a record current account surplus back into deficit, though the SARB said this is now declining at a slower pace than previously forecast.

It’s still not good news for the rand, as the surplus supported it.

So the SARB needs to raise rates to tame inflation at a time when South Africa is staring down the barrel of stagflation. But monetary policy alone cannot fully address the other ingredients in the stagflation bowl.

The SARB has cut its economic growth forecast for 2021 to 4.8% from 5.2%. The MPC statement noted that “economic growth will remain well above a low rate of potential growth. GDP (gross domestic product) is expected to grow by 1.7% in 2022. The deceleration in growth from 2021 to 2022 is primarily a result of the fading rebound from the pandemic, alongside a climbdown from high export prices. GDP growth is forecast to be 1.8% in 2023 and 2.0% in 2024.”

That remains sluggish indeed and barely keeps pace with population growth. The SARB can prevent a slide into stagflation, but major structural reforms are needed to create jobs and trigger faster growth.

“Rates cannot stay low forever because monetary policy cannot address the structural challenges in the economy. The biggest one is load shedding. The impact that has on growth and jobs cannot be fixed with interest rates,” said PwC’s Viljoen. DM168