Scandal and denial in Australia’s food (and tennis) capital 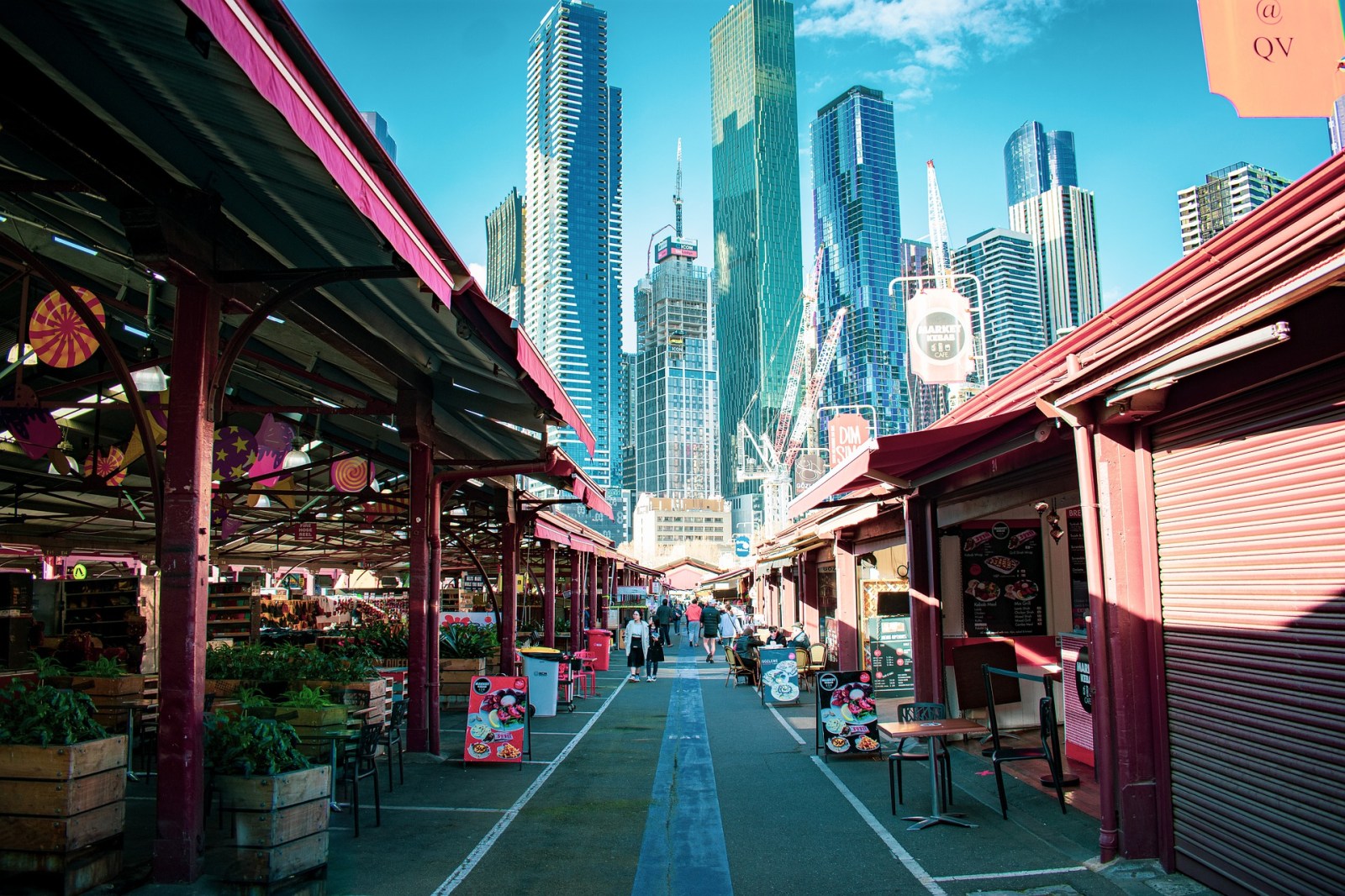 In typical Melbourne fashion, the skinner was not about vaccines or visas; it was about vegetables, and the consumption thereof by one of the most famous picky eaters on the planet. This is the city’s Queen Victoria Market. (Photo: unattributed on Pixabay)

In his debut monthly column for Daily Maverick’s TGIFood, Melbourne-based Neil McMahon shares the city’s frustration with the world’s harshest lockdown and its impact on its fabulous foodie scene – and how his inbox lit up with insider information about a certain tennis player they’ve sent packing.

Melbourne being Melbourne, even a pandemic-fuelled sports scandal has to have a food angle. And so it was behind the scenes in recent weeks as the world looked on agog at the Novak Djokovic vaccination scandal unfolding in the tennis – and foodie – capital of Australia. My rumour file was bulging with stories from informed sources who swore they knew what was going on, and in typical Melbourne fashion, the skinner was not about vaccines or visas; it was about vegetables, and the consumption thereof by one of the most famous picky eaters on the planet. What would the tennis champion eat when he got here? I learned weeks ago that a mansion had been rented; a chef and staff had been hired. Of course they had, because Novak is not just a very rich anti-vaccine nut. He’s a very rich nut more broadly when it comes to what he puts in his body. And for all the chances he was taking with his vaccine dodging, there would be no chances taken on his diet.

Before the world knew where he was or what he was doing, the following arrived in my private message box on Twitter, where a deep throat was divulging all: “He’s arriving tomorrow night to an array of healthy snacks at his rental house. The chef is moving into an Airbnb nearby tomorrow … he has a very specific, almost vegan diet.”

As anyone familiar with Novak’s history knows by now, “specific” is an understatement. You can read some of the background here and here, but in a nutshell it all began to change for the Djoker when he met Dr Igor Cetojevic, who is said to have carried out a most unusual experiment. “One of the tests was particularly interesting. Djokovic was asked to hold his arm up, after which someone tried to push it down. It was difficult. He was asked to do the same again, but with a slice of bread against his stomach. This time, his raised arm felt weak and could be pushed down quite easily. Bread was clearly his kryptonite.”

I share this story not to mock – okay, yes, I share it to mock, but not only to mock. Rather, I share it as an illustration of the kind of man we have been dealing with here as this scandal unfolded and as Djokovic found himself restricted to what is known here as a “detention hotel” – a place where asylum seekers are held, sometimes for years, and where you don’t get to conduct flakey experiments on your bread. In short, a city getting by on an already short fuse thanks to the pandemic – and its unfortunate status as the most locked-down city in the world – was in no mood to indulge a pampered persnickety multimillionaire sports star who wanted to thumb his nose at Covid rules, just as Melbourne was entering the third year of the crisis in a state of some bewilderment.

Not for nothing did polls show Australians want Novak sent packing, as eventually happened this week. When it comes to the indulgence of Covid deniers, patience has worn well and truly thin. Last year, we endured week after week of public protests by the anti-vaccine brigade, who clogged city streets in a weird alliance with other protest groups from the extreme right. Australia cherishes its right to public protest; this mob lost all public sympathy when they turned their protests into super-spreader events. At one of them, they peed in Melbourne’s beautiful war memorial, The Shrine, which has sat elevated on the edge of the city as a beacon of calm reflection for nearly a century.

Novak was never going to pee on The Shrine, but we have had enough of his ilk.

We’ve been in denial of lovely things for two years now – and among the things we’ve had to deny ourselves is Melbourne’s traditional food culture in a city that bows to few others for excellence and variety and innovation. Alas, like everything else, Covid has hammered that trademark foodie flair.

I can count the number of times I’ve eaten at a restaurant in the past two years on two hands, and have fingers to spare. Like many, I’ve instead spent the time doing my damnedest to create top-shelf food at home. As for many home cooks on Twitter, that has even meant regular engagement with Nigella Lawson – herself locked down for much of the past two years in London; the domestic goddess describes her lockdown life here. On social media, she has become the pandemic’s saintly dispenser of food wisdom and compliments to amateur chefs around the world. Want a Nigella thumbs-up for your take on her Crab Mac and Cheese? Just post a picture and tag her in the tweet. 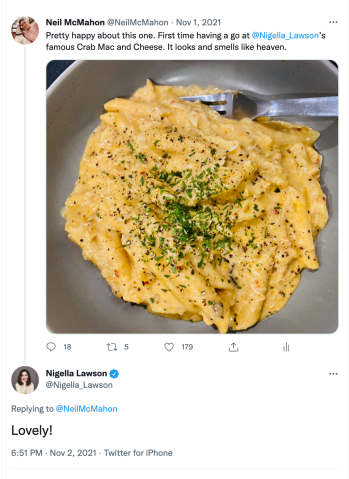 But as good as home-cooked fare can be when given the Nigella seal of approval, we long to return to our favourite haunts and share a table and time with friends and the chefs who live to feed us. It is often said of Melbourne that it is very hard to get a dud meal (or cup of coffee) and this is true. Everywhere you go, even the most ordinary of culinary ventures – a burger, a pizza or a bowl of pasta – is often elevated to another level. To understand the city is to realise that, unlike my former homes of Sydney or Cape Town, Melbourne does not have anything like the drop-dead physical beauty that captivates a visitor at first sight. She is one of those cities that needs to work harder to win you over. It does that with food. And culture. And sport. Things you do, more than things you see.

Even at the Australian Open, one of the world’s four grand slam tennis tournaments, the city turns its mind to experiences rather than sights. Tennis may take centre stage, but food and music abound. At this year’s tennis, the culinary experience has had plenty of publicity alongside the sporting one. Top restaurants team with the event to ensure players and fans enjoy a next-level dining experience alongside the ups and downs on the court. But as the event has officially begun this week, there has been a cloud – a bigger cloud than the one cast by the Novak brouhaha – as the rampage by Omicron has cast its shadow. Tennis fans and foodies like me have chosen to stay home rather than risk infection as Australia endures what is in some ways its most difficult days of the entire pandemic.

Our city longs to eat, drink and be merry once more. We want to show off. We want to spot Serena Williams at a cupcake shop. Or Stefanos Tsitispas at Melbourne’s legendary Greek tavern Stalactites, where the world No. 3 has a souvlaki named in his honour. Or John McEnroe at a French bistro. Even picky-eater par excellence Novak Djokovic doesn’t stick entirely to the spartan, at least when he wins the title.

And so as the Open unfolds over these two weeks – peacefully, we hope, without the Djokovic mess as a distraction – it is less the typical annual celebration we love than it is a reminder of what we want the city to be again. A city fully embracing the things it loves to touch and taste and feel. For the moment, though, we carry on in the half light, hoping the year ahead doesn’t mock the hopes we’ve once more put on hold. DM/TGIFood