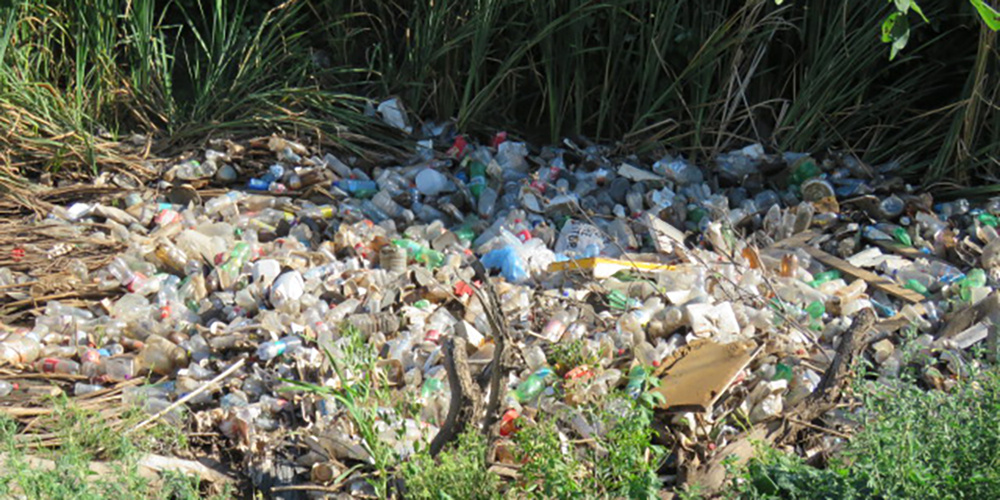 The Komani River, which forms part of the Great Kei River system in the Eastern Cape, is polluted with plastic waste and sewage. (Photo: Tembile Sgqolana)

Years of pollution and illegal dumping in the Komani River in the central business district of the Eastern Cape town of Komani (formerly Queenstown) are having a devastating impact on the environment and the wellbeing of those who live in the area.

The river in Komani is filled with plastic bottles, plastic packets, tyres and refuse from illegal dumping and littering.

This has obstructed the flow of water. To add to the problem, drains are discharging sewage into the water.

Just below the bridge near Spargs SuperSpar there is a strong stench from cattle carcasses, urine and faeces.

Thobela Hlathana, a hawker at the bridge, said: “Now that temperatures have been above 30 degrees in Komani, the stink is unbearable and it affects our business as no one would want to buy my fruit in a smelly place.

Hlathana said they had lived under such conditions for years — nothing had been done to clean the river.

Komani Hawkers Association chairman Ncamile Faku confirmed that the stench and pollution were affecting the livelihoods of hawkers who trade there.

“There are no public toilets in the area and people end up using the river to relieve themselves. The situation has been like this for the past 15 years,” he said.

Faku said that last year Spargs store manager Bryan Kretschmer had organised a clean-up of the river, but that did not help.

Shop owner Nosabatha Ssemakula said they close their doors in summer because of the stink coming from the river.

“We have been complaining to the municipality, but nothing is being done to clean the river. Sewage spills are flowing straight to the river and we deal with cattle and pigs that are roaming around the river.

“There are no refuse bins in the area and people end up littering, and that goes to the river and affects the environment.”

Enoch Mgijima Municipality spokesperson Lonwabo Kowa said a project to clean the river and the streets of Komani had been undertaken in 2019 and ended in March 2020 with a budget of R1-million sourced from Chris Hani District Municipality.

“The endeavour took a period of six months where 30 local people were employed on a temporary basis. This left the area clean, but unfortunately, the same problem of littering is being experienced even though awareness campaigns to educate the public on the importance of maintaining a clean environment were undertaken,” Kowa said.

He said another similar project was in the pipeline.

“At this stage, Enoch Mgijima Municipality does not have sufficient capacity to ensure that it is kept clean… as some use the river as a site to discharge all unwanted rubbish and carcasses.

“Awareness campaigns are continuing, but only a few have heeded the call,” he said. DM/OBP