Throwback Thursday: The art of the stir fry

Throwback Thursday: The art of the stir fry 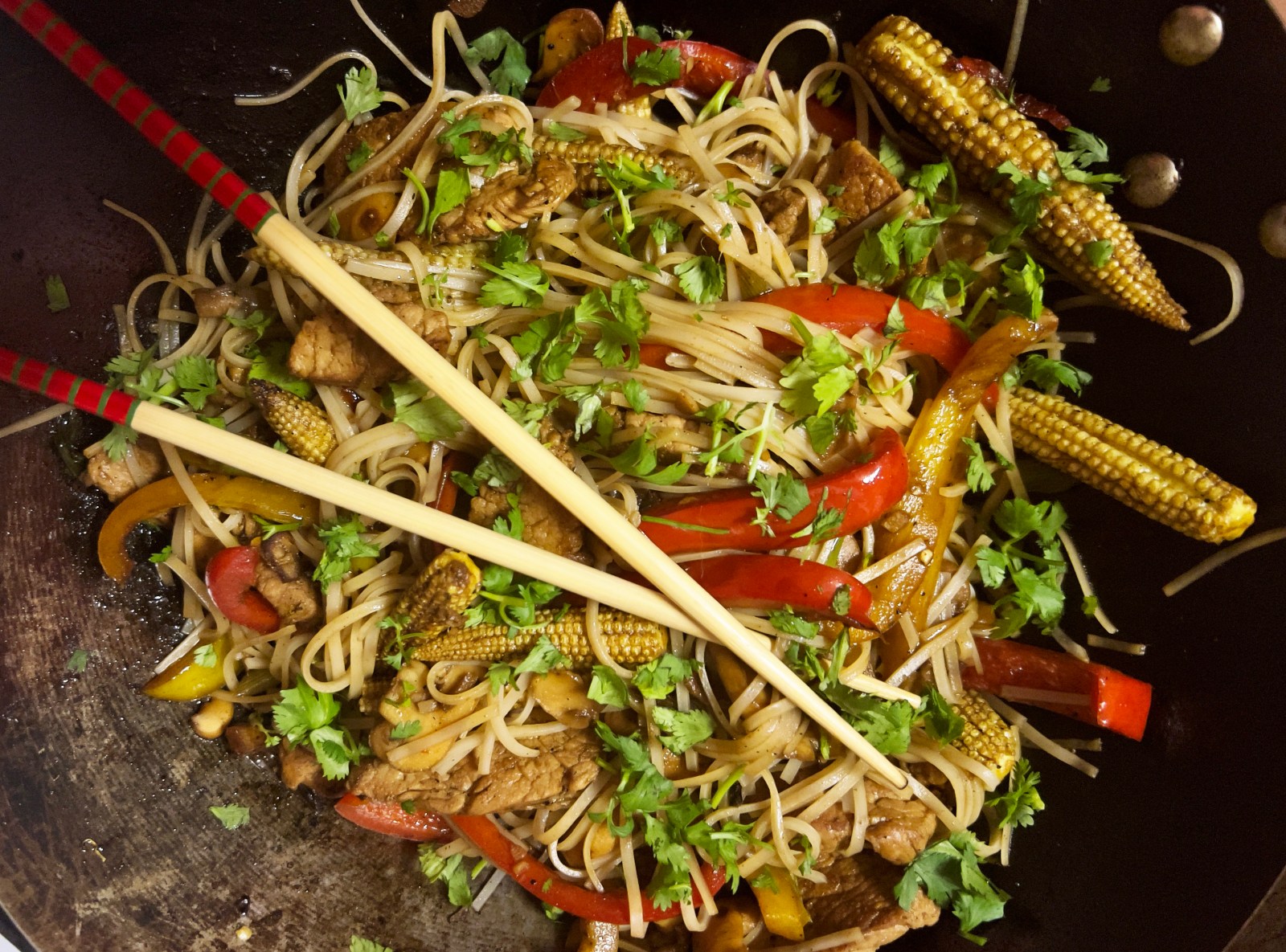 The day manufacturers of mass frozen foods decided to package frozen vegetables and label them ‘stir fry’ was a very bad day for cooking in a wok.

The very, very last thing you want to put into a wok is frozen vegetables. We’ve all probably done that. I know I have … a very long time ago when I didn’t know any better. And I only did it once; one mouthful of mushy, soggy dull greens of indeterminate origin or vintage should be enough to tell you that no Chinese cook with any semblance of pride or dignity would cook with it.

If you have a packet of frozen “stir fry” vegetables in your freezer, stop reading this right now, go and get it out of the freezer, and empty it onto the compost heap. Or mix it into the dog food. Or something. But do not let it anywhere near your wok.

Wikipedia, which doesn’t get everything right, argues that stir frying in a wok is “similar to sautéing in Western cooking technique”. No it isn’t. That’s like saying dogs are similar to pigs because they have four legs and a snout. Wok frying is very fast, even violent, cooking in oil at high temperature; sautéing is as gentle and slow as it comes, on a low heat. Wok cooking gets the job done in hardly any time at all, whereas sautéing is all about taking plenty of time to achieve tenderness. In wok cooking, the flavour is piled on instantly, the soy, the garlic, the spices, sesame oil, hoisin, oyster sauce, black bean sauce, depending on which flavour profile you’re looking for. In the sauté pan, the ingredients can be left to simmer on their own for a while with an occasional stir; in a wok that wooden spoon or paddle keeps moving. So no, Wikipedia, sautéing has no more in common with stir frying than it does with making a soup or bechamél.

Cooking in a wok is relatively new to the West, and even a few decades ago it was rare for them to be used in a domestic kitchen outside of Asia. Certainly, in the Sixties and even the Seventies we’d usually only encounter woks in a Chinese restaurant. And even then they were often out of sight, as the modern habit of open-plan restaurants where the diners can view what’s happening in the kitchen wasn’t current in earlier decades.

But wok cooking is truly ancient. Scholars suggest that drying grains in a form of wok may have been done it as far back as the Han dynasty (206 BC-220 D), though only in the considerably more recent Ming dynasty (1368-1644 AD) did the pan achieve its familiar concave shape and come into widespread use for cooking in oil at high temperature, very quickly.

And that remains the secret to cooking in a wok: heat plus speed plus the very important element of constant stirring.

In recent decades, chiefly from the Eighties onwards, most of us have learnt to stir fry in a wok, and have held Asian-theme dinner parties, with varying results depending on how adept we are at this ancient method of easy but specific cooking. The ingredients themselves can change in many ways as long as the essential rules of wok frying are followed. Here’s what I cooked in my wok this week, and my way of doing it…

4 spring onions, sliced on the diagonal in 2 cm or 3 cm pieces

½ a red and ½ a yellow pepper, seeds removed, sliced julienne

Oil such as peanut, grapeseed or coconut

Asian noodles of your choice

Boil a kettle. Put the noodles in a deep bowl. Halfway through the following cook, pour boiling water over the noodles to cover, and leave it to soak. This is how I do it, no matter what kind of Asian noodle it is, and it always works a treat.

Mix the soy sauce and rice wine in a bowl and stir in the fivespice. Keep this next to the stove top to add as you cook. (I often use other Asian sauces, but this was the mix I chose for this dish, but be as inventive as you like and adapt the recipe to suit yourself and what’s in the cupboard.)

Slice the mushrooms, spring onions, garlic, chilli and peppers. Put them all in a container next to the stove, keeping the mushrooms separate. (Mushrooms cook a little differently from the other vegetables involved as they release juices which have to be cooked away.) Slice the pork and have it to hand in a second container.

Add a little sesame oil and another oil such as peanut to a cold wok and then put the heat on high underneath it.

First cook the sliced mushrooms, stirring all the while, until they turn a nutty brown, adding a splash or two of the sauce while you cook them. This “seasons” the wok for the rest of the cook. That’s the thing about stir frying: each element that is cooked flavours all the rest of the ingredients to follow. It builds up incrementally. Just as oil must always go into a cold wok. Do they teach these things in our cooking academies, I wonder? They ought to, alongside the essential French techniques and other basics.

Next, add a tiny bit more oil and fry a few pieces of the pork, just enough to cover the bottom of the wok but without them touching each other. This, plus the high heat, is how you avoid the meat bleeding and consequently stewing. That plus moving the pieces of meat around.

Remove those to a side dish and fry the next batch and the next until it’s all done.

Now add all the remaining vegetables including the baby corn, chilli, garlic, the works. And cook on a high heat while stirring constantly. Not for long at all, just enough to get the veg just done. Add more of the sauce as you cook.

Put the meat back in, add more sauce, and stir it all so everything is pleasantly mixed up.

Quickly drain the soaked noodles, add them to the pan, toss, and serve. That’s it. Done. Garnish with chopped coriander if you like. Grab the chopsticks. DM/TGIFood