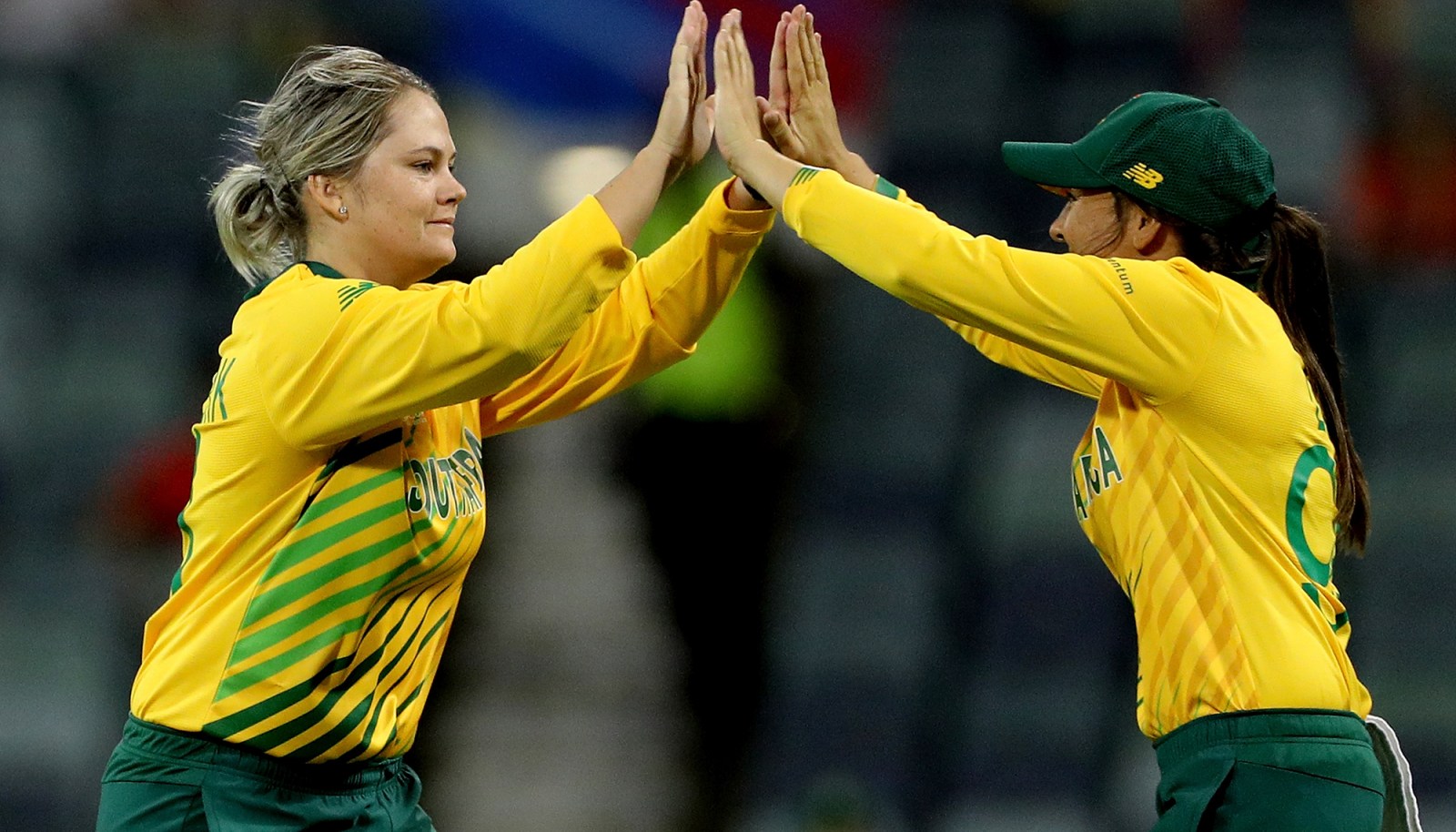 Dané van Niekerk (left) of South Africa is congratulated by Suné Luus after dismissing Fran Wilson of England during the Women's T20 World Cup cricket match between at the WACA Ground in Perth, Australia, on 23 February 2020. (Photo: EPA-EFE / RICHARD WAINWRIGHT)

The Proteas women, who are genuine contenders for the upcoming 50-over World Cup in New Zealand, are raring to test their strength against the West Indies in a four-match series.

Though out for a morale-boosting and momentum-maintaining series victory against the West Indies, the Proteas women will also be using the four-match contest as a platform for final preparations heading into this year’s One-day International (ODI) World Cup in New Zealand – which they have as good a chance of winning as anyone.

The South Africans head into the series on a streak of four series wins on the trot, having vanquished New Zealand in 2020, and then Pakistan, India and the Windies in 2021.

Suné Luus, who will be the stand-in skipper due to the lengthy and injury-enforced absence of regular captain Dané van Niekerk, says the team will be looking to try out different combinations and tactics heading into the World Cup, which will commence on 4 March.

“Getting a few games before the World Cup is very crucial for us to get some game time under our belts. If we win all four games and win the series, that would be a bonus,” Luus told journalists on Thursday.

“As a unit, our bigger picture is the World Cup and to try out different combinations to see what works for us, and what maybe doesn’t; what we need to tweak a bit. The biggest thing for us is just to take it one game at a time, be present and see where our preparations are.”

Skipper Van Niekerk suffered a freak injury, fracturing her ankle after slipping on a wet surface at home. She will be out for three months and unavailable for the World Cup – so Luus will lead the team in New Zealand as well.

Not a stranger to leading her country, having been handed the responsibility a few times in her captain’s absence – including for two games as the Proteas thumped India, the allrounder says “captaining in a World Cup is a whole different ball game” compared with a traditional series.

Though the 26-year-old will have the assistance and experience of players such as Shabnim Ismail, Mignon du Preez, Ayabonga Khaka and Marizanne Kapp to call on, she is grateful to be able to fine-tune and further communicate her style of captaincy to her teammates so close to the World Cup.

“It’s great to have these games before heading into the World Cup, to prepare yourself and get the team accustomed to you again. To build those relationships and that trust with the team… I want to see it as just another cricket game. Yes, it’s on a bigger stage, but it’s a normal cricket game – you have to take it like that and have a clear mind to make the right decisions.”

In addition to Van Niekerk’s absence, the South Africans will have to do without the recently crowned ODI player of the year, Lizelle Lee. The prolific opening batter was left out as she continues her recovery from Covid-19.

However, her absence is an opportunity for one of the fringe players to stake a claim for a place in the squad that travels to New Zealand in just over a month.

“She is one of a kind, you can’t really replace her,” Luus said of Lee. “A couple of players have been knocking on the door in provincial games and in the training camp. It is a good opportunity for them to really take that role and make it their own.”

The opening match of the series is set for 2pm South African time on Friday. DM