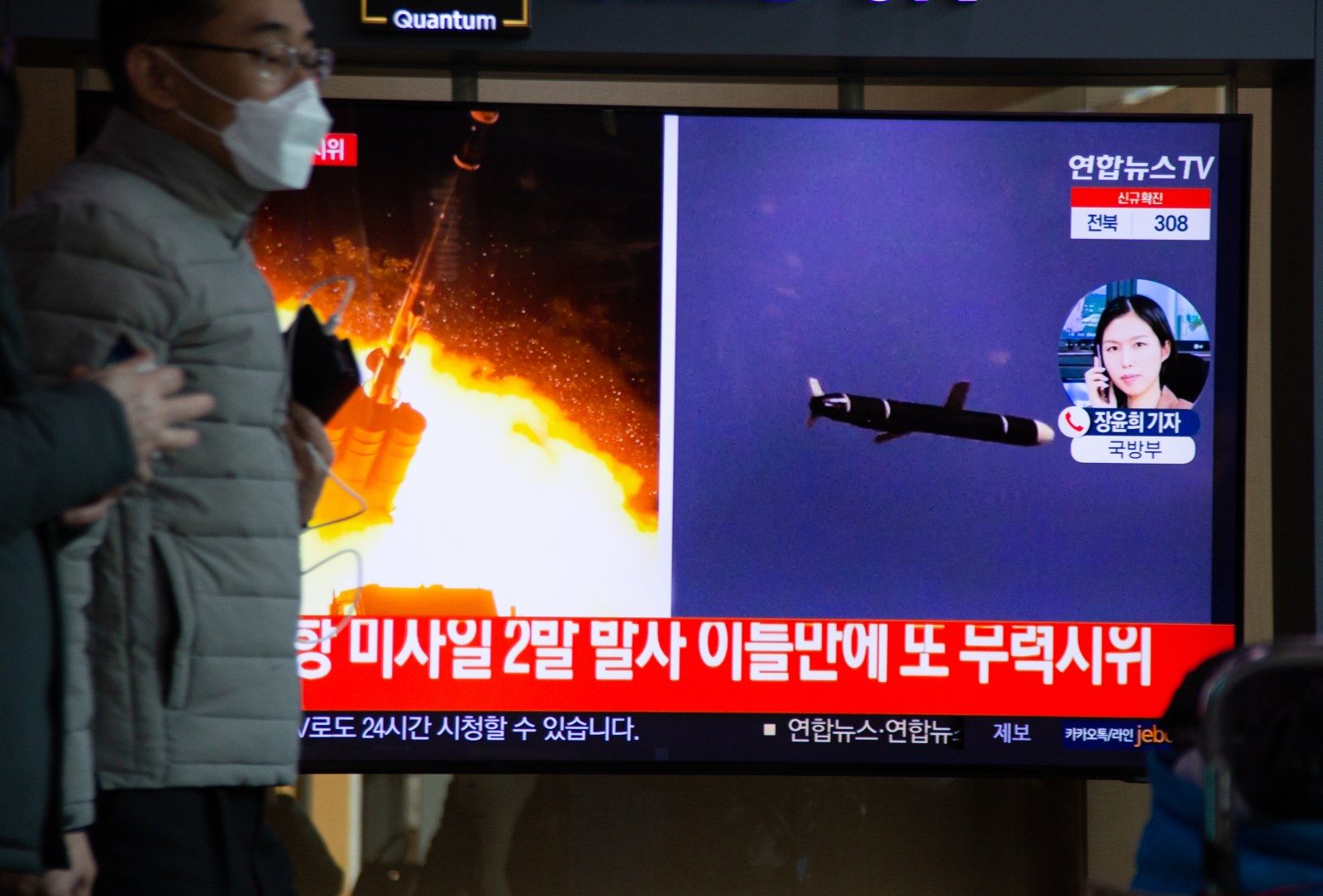 SEOUL, Jan 27 (Reuters) - Nuclear-armed North Korea fired what appeared to be two short-range ballistic missiles on Thursday, drawing condemnation from the United States for what would be the sixth round of missile tests this month.

The series of tests is among the most missiles ever launched by North Korea in a month, analysts said, as it begins 2022 with a dizzying display of new and operational weapons.

South Korea’s Joint Chiefs of Staff said it had detected the launch of what it presumed were two ballistic missiles at about 8 a.m. (2300 GMT) from near Hamhung, on the east coast of North Korea. They travelled for about 190 km to an altitude of 20 km, JCS added.

North Korea said this month it would bolster its defences against the United States and consider resuming “all temporally-suspended activities”, an apparent reference to a self-imposed moratorium on tests of nuclear weapons and long-range missiles.

The launch came after North Korea fired two cruise missiles into the sea off its east coast on Tuesday, adding to the tension over its tests.

Certain tests aim to develop new capabilities, especially for evading missile defences, while other launches are intended to demonstrate the readiness and versatility of missile forces that North Korea has already deployed, he said.

“Some observers have suggested that the Kim regime’s frequent launches are a cry for attention, but Pyongyang is running hard in what it perceives as an arms race with Seoul,” Easley said.

In a speech to the U.N.-sponsored Conference on Disarmament on Tuesday, North Korea’s Ambassador to the United Nations in Geneva, Han Tae Song, accused the United States of staging hundreds of “joint war drills” while shipping high-tech offensive military equipment into South Korea and nuclear strategic weapons into the region.

“(This) is seriously threatening the security of our state,” Han said.

A U.S. State Department spokesperson condemned the launches as a violation of multiple U.N. Security Council resolutions and a threat to North Korea’s neighbours and the international community.

The United States remains committed to a diplomatic approach and calls on North Korea to engage in dialogue, the spokesperson said.

As with other recent tests, the U.S. military’s Indo-Pacific Command said that the launch was destabilising but did not pose an immediate threat to U.S. territory or personnel, or to its allies.

South Korean and U.S. nuclear envoys had a phone call during which they shared “deep concerns” over the latest test and agreed to continue cooperation to prevent further escalation, Seoul’s foreign ministry said.

South Korea’s National Security Council convened an emergency meeting, at which it said the launches were “very regrettable” and went against calls for peace and stability in the region, the presidential Blue House said in a statement.

At a media briefing in Bejing, foreign ministry spokesman Zhao Lijian said China urged all parties to “speak and act with caution, stick to the right direction of dialogue and consultation, and jointly promote the political resolution of the Korean Peninsula issue.”

On Wednesday, U.S. Deputy Assistant Secretary of State for Japan and Korea Mark Lambert said that Washington had “no reservations” about talking with North Korea and was willing to meet anywhere and talk about anything.

“We have to have a serious discussion about the denuclearisation of North Korea, and if North Korea is willing to do that, all sorts of promising things can happen,” he said during an online seminar hosted by the Washington-based Center for Strategic and International Studies.

North Korea has defended its missile tests as a sovereign right of self-defence and said U.S. sanctions proved that even as the United States proposes talks, it maintained a “hostile” policy.

“The recent test-firing of new types of weapons was part of activities for carrying out a medium- and long-term plan for development of national science,” the North Korean U.N. envoy Han said in a speech on Tuesday.

“It does not pose any threat or damage to the security of neighbouring countries and the region.”

North Korea has not launched long-range intercontinental ballistic missiles (ICBMs) or tested nuclear weapons since 2017 but began testing a slew of shorter-range missiles after denuclearisation talks stalled following a failed summit with the United States in 2019.