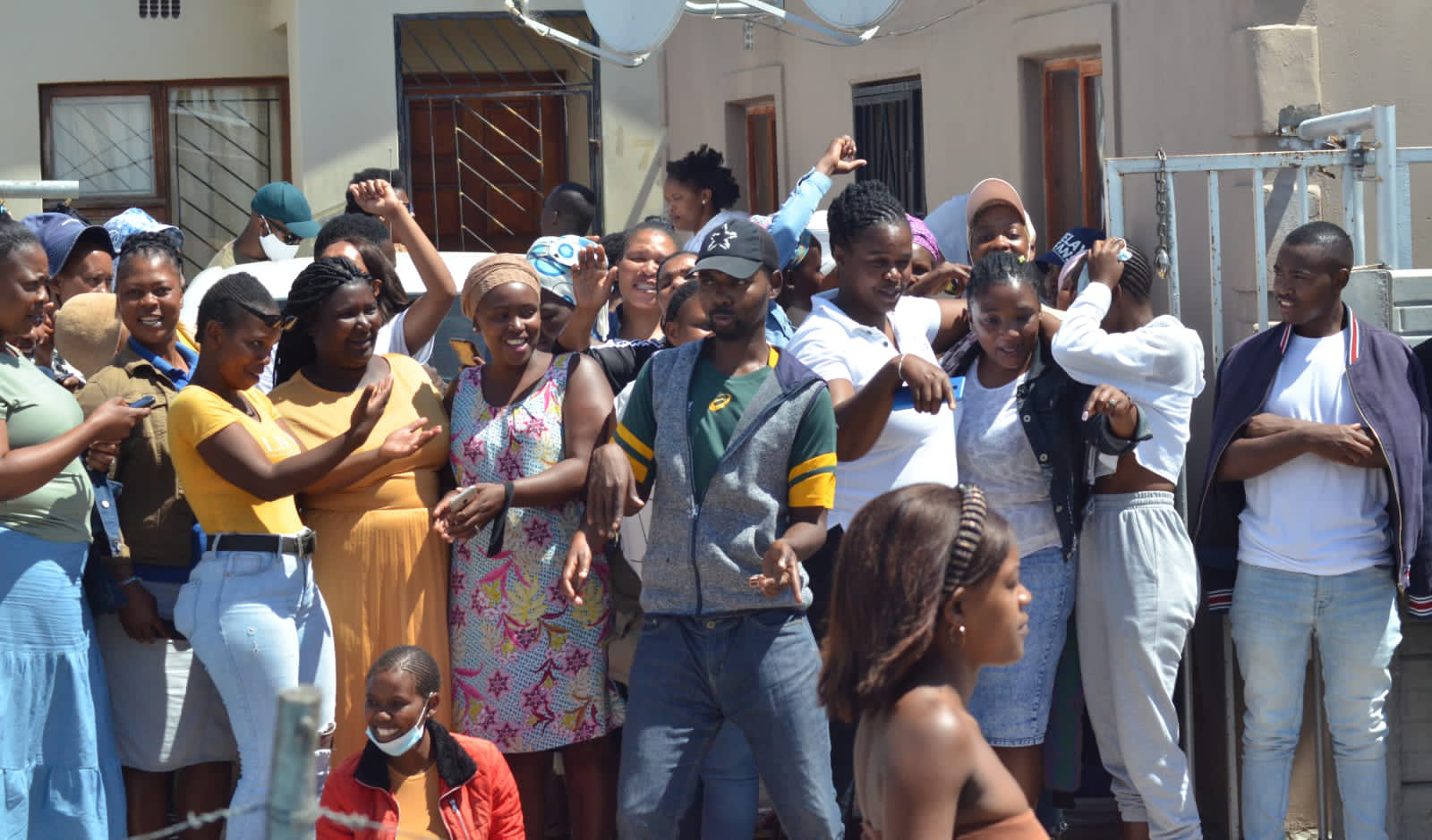 Some of the job seekers, who were scammed out of R800 by a cleaning company, picket outside the home of one of the owners demanding their money back. The owner told GroundUp that she fled Cape Town. (Photo: Nombulelo Damba-Hendrik)

Police have yet to make any arrests while victims are left to the mercy of loan sharks.

Police in Kraaifontein, Cape Town, are investigating a case of fraud after 230 people in the community were conned by a cleaning company called Aico n Thabie Services.

According to unsuspecting job seekers, the company had verbally advertised that it had a contract with the City of Cape to clean Somerset Hospital, but in order to be hired, applicants had to pay R800. They were told that this fee would also cover their transport to and from work.

But the City does not even manage Somerset Hospital. The hospital is managed by the Western Cape health department and officials have confirmed that a contract was not awarded to this company.

GroundUp spoke to some of the victims who were picketing outside the home of Thabisa Yekela in Milnerton, demanding that they be paid. Yekela co-owns Aico n Thabie Services with Akhona Nolwazi Mde. Picketers were told that the two owners were not at the property at the time.

Ndzongane said he assisted victims with opening a case in Kraaifontein Police Station in December, but nothing came of it.

Police spokesperson Frederick Van Wyk confirmed that no arrest has been made but that investigations continue.

Ndzongane explained that Mde had rented a flat in Kraaifontein and told people in the area that her company was hiring cleaners to work at Somerset Hospital. “[Mde] made it look so legit. She even showed T-shirts with her company’s branding. I was hired as an administrator. CVs were submitted to me but the money was paid to Akhona [Mde],” said Ndzongane.

He said those hired were meant to start work in October but Mde told them that the City had not yet paid the company. She told them that instead of cleaning the hospital, they had to clean the streets in the area, said Ndzongane.

Another victim Khungeka Nqilo said she was excited to sign the contract with the company that stated she would be paid a monthly stipend of R3,500. “That was a lot of money for someone like me who was staying home doing nothing,” she said.

Nqilo, like many of the applicants, took out loans to pay the R800 fee. “We now owe the loan sharks their money with 50% interest.”

She said Mde and Yekela made excuses about why they had not started work at the hospital, stating that there were outstanding documents needed before they could be paid. At the end of November, Nqilo said, they were promised that they will be paid by 7 December. This never happened.

“We started questioning them. That is when they removed us one by one from the work WhatsApp group. Mde had also left the flat she was renting. Since then she has not returned to our area,” said Nqilo.

“None of us suspected that this was a scam. They kept giving us excuses about our payment and we believed them. They gave us a uniform but later took it back, promising to give us a new one in early December but they disappeared,” said Khophoyi.

During a telephonic interview, business owner Thabisa Yekela denied having any prior knowledge of shady dealings or scamming job seekers. She insisted that the company was contracted to clean the hospital. But when asked for proof, she said the contracts and company documents were with her business partner and referred us to Mde.

“There were a lot of things happening behind my back like the scamming of people which I was not aware of. I’m also a victim. I ran to Durban because people wanted their money from me and I did not take it,” said Yekela, but refused to share any company documents with GroundUp.

Several calls and text messages sent to Mde went unanswered by the time of publication.

When asked whether the City had any agreements with the cleaning company, spokesperson Tarryn Rinkwest said that the City only managed clinics and referred us to the provincial department.

Western Cape health spokesperson Maret Lesch confirmed that they did not appoint Aico n Thabie for any contract. Lesch added that employees would also not be required to pay for transport. DM