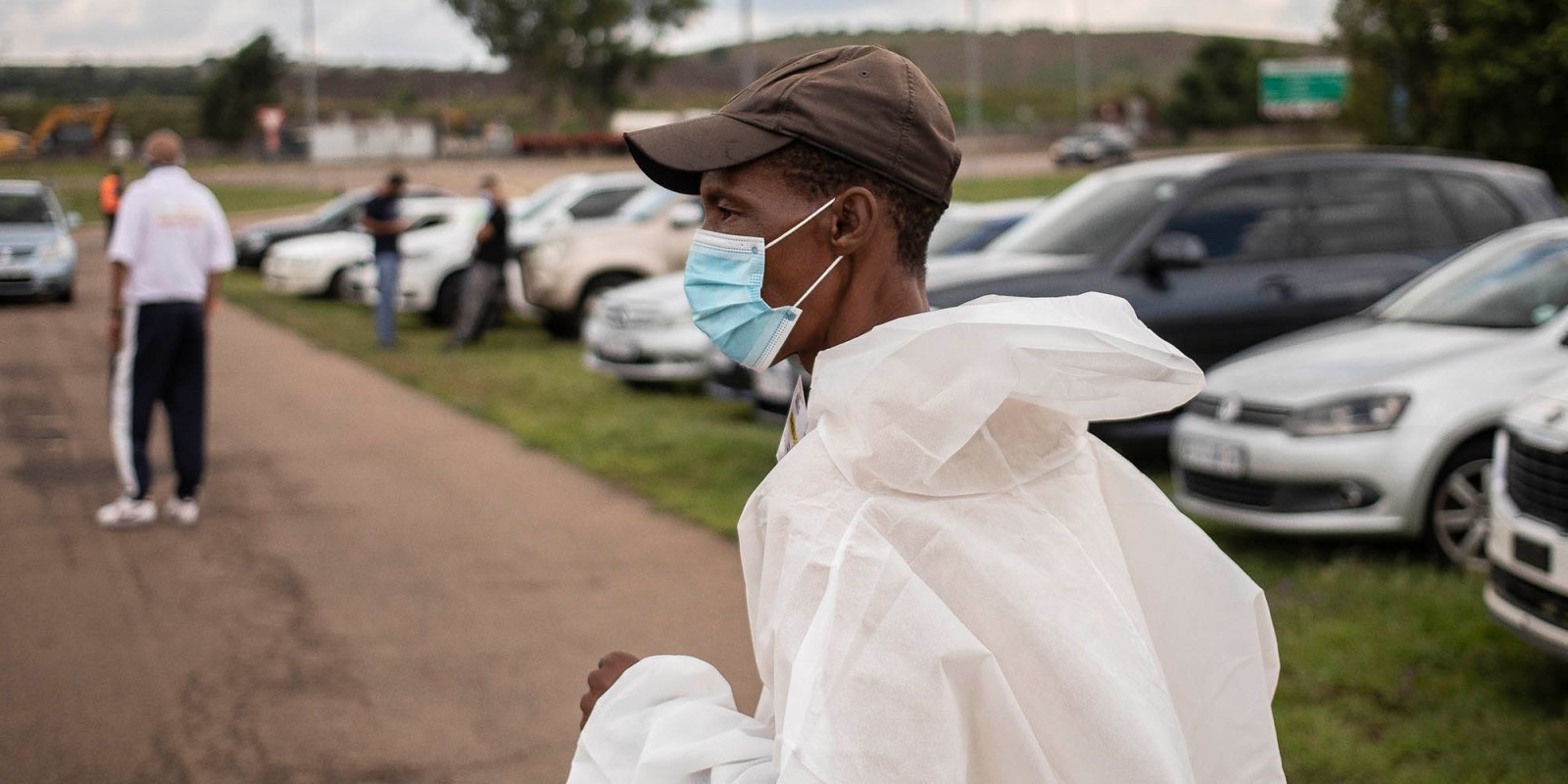 A volunteer in personal protective equipment at a Covid-19 drive-through vaccination facility at the Zwartkops Raceway in Pretoria. (Photo: EPA-EFE / Kim Ludbrook)

More than 10 billion doses of Covid-19 vaccine have been administered across the globe, according to the latest tally from the Bloomberg Vaccine Tracker.

Denmark will end virus restrictions next week and reclassify Covid-19 as a disease that no longer poses a threat to society. Austria will end a lockdown for unvaccinated people next week as the latest wave of infections isn’t overwhelming hospitals.

Hong Kong’s zero-tolerance approach could keep the Asian financial hub cut off from most of the world until 2024, according to a report. France, South Korea and Germany posted record case numbers.

BioNTech plans a 50% boost in staff at its biggest German factory this year as the Omicron variant drives demand for boosters of the vaccine it developed with Pfizer. 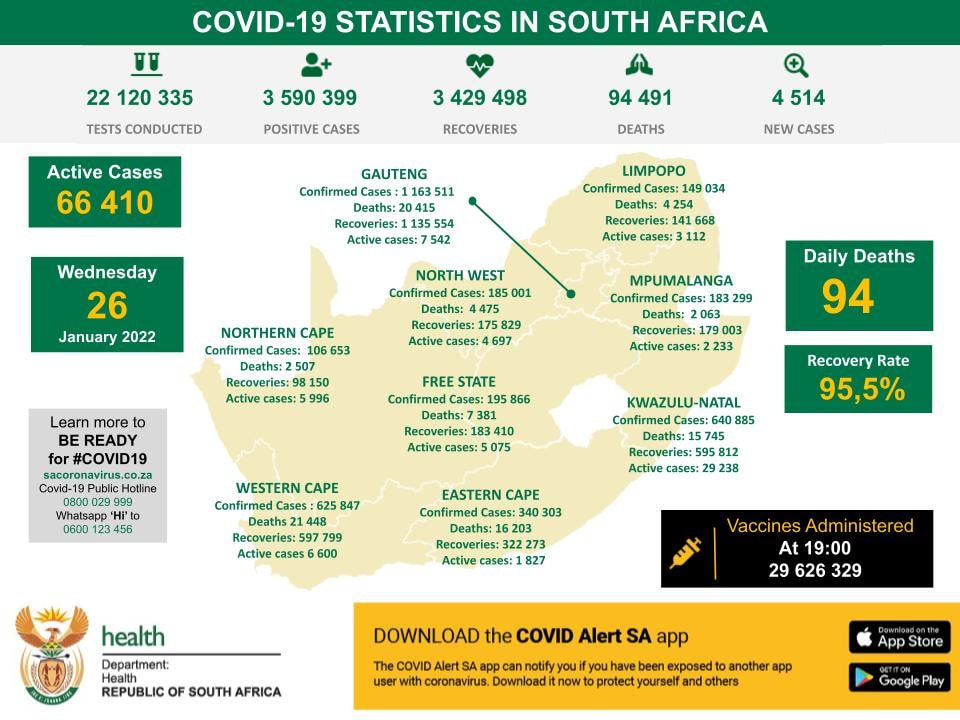 Denmark will end virus restrictions next week and reclassify Covid-19 as a disease that no longer poses a threat to society, even as infections in the Nordic nation are at a record high.

Getting two doses of the Covid-19 vaccine lowers the odds of developing long Covid at least three months later by 41%, according to an observational study from the UK Office for National Statistics.

Researchers found no evidence that the likelihood of developing long Covid symptoms differs for those who got messenger RNA vaccines like those made by Moderna or Pfizer and BioNtech, from those who received the viral vector vaccine from AstraZeneca.

The results are based on an analysis of 6,180 people between 18 and 69 years old who tested positive for the virus. The figures cover the period up to 30 November and don’t capture the impact of booster doses or the Omicron variant.

“These results do provide quite a big measure of indicative evidence that double vaccination might well cause a reduction in the risk of long Covid, if one is unlucky enough to become infected after being vaccinated,” said Kevin McConway, professor of applied statistics at The Open University.

“We say this now even though we are facing a significant wave, because we must acknowledge that there is hardly any way out,” Director-General Camilla Stoltenberg said in a statement on Wednesday. “We can’t just push the epidemic in front of us, because the measures also have major disadvantages.”

Norway is lagging behind neighbouring Denmark, which was set to unveil plans to end the lockdowns and reclassify Covid-19 as a disease that no longer poses a threat to society later on Wednesday. The Swedish authorities said earlier they will extend the restrictions due to a surge in infections, but expect to be able to remove most curbs in two weeks.

More than 10 billion doses of vaccine have been administered across the globe, according to the latest tally from the Bloomberg Vaccine Tracker.

The total is more than enough to give a dose to every person on Earth. But the milestone hides substantial inequality: Just over 13 months since the first vaccines went into arms, many wealthy, developed nations have achieved deep levels of vaccination across their populations. Many less-wealthy places, particularly in Africa, have not.

Sweden to extend curbs on Omicron

Sweden will extend its current rules to curb Covid transmission, as health authorities expect that as much as 10% of the population could be infected by the virus in the next two weeks. The government expects to be able to remove most restrictions from 9 February, Social Minister Lena Hallengren said at a press conference.

Scientists seeking to find out which patients are most at risk of developing long Covid offered partial answers in a study.

People who have circulating fragments of the coronavirus, specific antibodies directed against their own tissues or organs — known as auto-antibodies — and a resurgence of the Epstein-Barr virus appear more at risk, researchers said in an article in the scientific journal Cell.

The team of more than 50 researchers found some markers that could be identified early and appeared to correlate with lasting symptoms, regardless of whether the initial infection was severe.

Poland reported a record 53,420 new cases and the government ordered remote schooling for older grades in primary schools and all high schools until the end of February. The Parliament plans to discuss draft regulations allowing companies to check vaccination status of their employees.

Austria to end lockdown for unvaccinated

Austria will end a lockdown for unvaccinated people from 31 January after the rate of infected people requiring hospitalisation remained low during the latest wave of the pandemic.

The easing measure, announced by Chancellor Karl Nehammer, coincides with the introduction of mandatory vaccinations next month, with fines for dissenters beginning in mid-March.

BioNTech plans a 50% boost in staff at its biggest German factory this year as the Omicron wave drives demand for boosters.

BioNTech will add about 250 jobs this year at the factory in Marburg, north of Frankfurt, the company said. Already one of the biggest messenger RNA vaccine factories in the world, the Marburg site has supplied more than 1.2 billion doses of the Covid vaccine BioNTech sells with Pfizer.

Most who get Covid in UK had virus already

About two thirds of the participants in a large UK study who tested positive this month reported a previous infection with the virus, researchers found.

Another 7.5% said they suspected they’d had an earlier case, according to the React-1 study led by Imperial College London. Researchers looked at infections among about 100,000 volunteers from January 5 to January 20.

Romania’s cases almost doubled in the past 24 hours, reaching the highest level since the start of the pandemic of more than 34,000 new infections.

Hungary’s cases topped 20,000 for the first time, fuelled by the Omicron variant. Hospitalisations increased, but remained below earlier waves.

Omicron subvariant is still in minority

While several countries are reporting increases in the Omicron subvariant BA.2, the main BA.1 variant still represents 98.8% of the genetic sequences collected and submitted to the international GISAID database, the World Health Organization said in its weekly Covid report. The WHO said it’s continuing to monitor all subvariants of Omicron.

A vaccine being developed in China using messenger RNA, the new technology that has become the backbone for immunising much of the world, may fall short of the benefits generated by shots from Pfizer, BioNTech and Moderna.

The first published study of the experimental vaccine from Walvax Biotechnology, Suzhou Abogen Bioscience and the Chinese military generated twice the level of neutralising antibodies seen in people who had recovered from a Covid-19 infection, though only at an intermediate dose.

People given slightly more or slightly less produced fewer of the protective antibodies than those who recovered from an earlier infection, the study found.

Taiwan reported 46 local cases and as many imported cases on Wednesday, according to its Centres for Disease Control. Askey Computer Corporation, an affiliate of Asustek Computer Incorporated, is continuing its production halt after reporting new cases, Health Minister Chen Shih-chung said.

Japan is set to miss a target to give booster shots to almost 15 million people this month after the fast spread of the Omicron variant threw initial roll-out plans into disarray. About 2.6 million people had received their third dose as of Tuesday, roughly 18% of the target for January, according to government figures.

China reported nine infections among incoming air travellers and another four in the closed loop involved in the Winter Olympics on Tuesday, who are all from a category of “stakeholders,” the Beijing Organising Committee for the Olympics said in a statement.

New South Wales state reported on Wednesday that it had passed one million Covid-19 cases since the pandemic began, just as people gathered across the nation for Australia Day events.

While citizenship ceremonies, celebrations and protest rallies all increased the risk of further infections, there were also some signs that the number of people being hospitalised and in intensive care may be plateauing.

Hospital admissions in New South Wales, the country’s most populous state, dropped slightly to 2,794 and ICU numbers eased to 175 over the past 24 hours, according to government data.

In Queensland state, where the health system is also under strain due to the spread of the Omicron variant, officials expressed optimism that infections may peak soon in the southeast.

Royal Caribbean is considering relocating its cruise ships to Singapore due to the stringent measures in Hong Kong and high operating costs, local media outlet HK01 reported on Tuesday, citing unidentified people. The company may also stop its “cruise-to-nowhere” business in Hong Kong.

Cases also reached a record in France, exceeding 500,000 for the first time. DM/MC