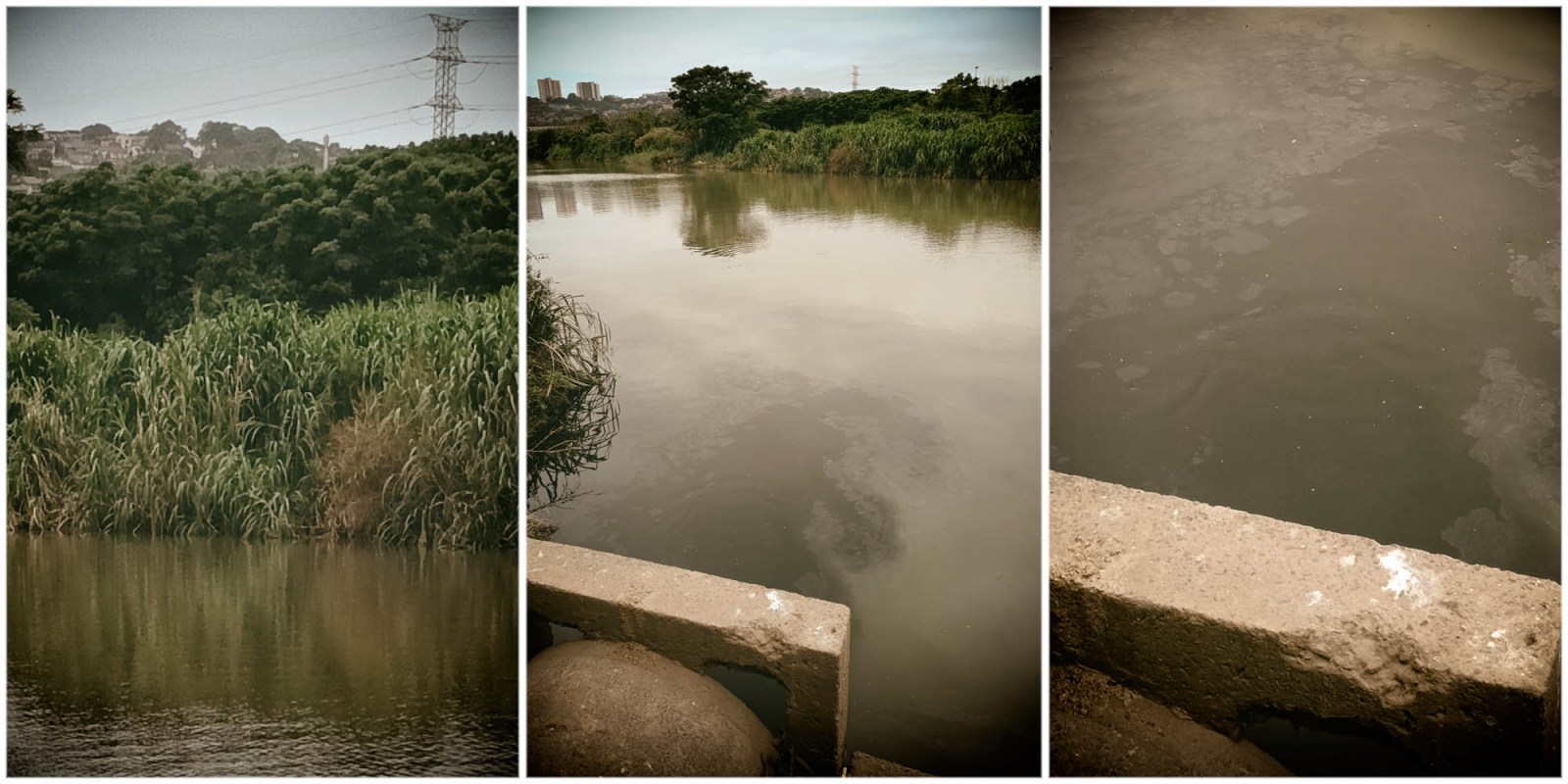 The eThekwini municipality has finally admitted that its overflowing sewage treatment works were responsible for the tide of black water pollution that led to the closure of Durban beaches during the New Year holiday season. But it’s refusing to publicly release the results of recent beach water quality samples.

For at least 25 days, a steady stream of partially treated human waste has been emptying into Durban’s Umgeni River, just 4km upstream from Durban’s tourist beaches.

And it hasn’t stopped yet.

Earlier this week, Our Burning Planet filmed the continued flow of sewage effluent into the Umgeni River from a municipal outlet pipe in Willowfield Crescent in Springfield Park, close to the Northern Wastewater Treatment Works.

Based on photographic evidence of black water pollution at the Blue Lagoon and continued discharges from the Willowfield outlet, it appears that the flow of dangerous levels of pathogens and bacteria towards Durban’s beaches has continued almost non-stop from at least December 31.

The public health risks of municipal sewage pollution in rivers across South Africa is, sadly, nothing new. But when senior public officials appear on television in an attempt to bamboozle the public that all is well, or to deflect legitimate concerns about public health, that is another issue.

These concerns have been reinforced by reports that several canoeists fell ill this week after a canoe race along the Umgeni between Inanda Dam and Blue Lagoon.

Janet Simpkins, director of the Adopt-a-River community nonprofit watchdog group, said a survey of canoeists showed that at least 48 participants complained about gastro-related sickness after the race.

Formal academic studies by University of KwaZulu-Natal researchers have highlighted the more serious risks of cholera, hepatitis and other diseases being transmitted via exposure to sewage bacteria and pathogens in water from the Umgeni River, which flows on to Durban’s beaches.

We sent questions to the eThekwini municipality on Wednesday requesting laboratory results of all beach water quality samples from January 4 after the recent series of flip-flop decisions to close, open, close, and open beaches over the holiday season.

It was a complete “no go”, as city spokesperson Lindiwe Khuzwayo dodged our very direct questions.

We asked the municipality: “You will recall that we requested original copies (on January 7) of all E. coli laboratory test results by eThekwini’s laboratory which informed the decision to reopen beaches on January 6 (as announced by Malcolm Canham) We now repeat this request and further request full copies of lab sample results for water quality tests from January 4.”

We asked: “If the city declines to release the results requested above, what is the reason for refusing this request?”

We asked: “If the city releases the results and any beaches show E. coli readings in excess of 2,000 cfu/100ml between January 4 and today at any beaches open over this period, on what basis was the decision taken to reopen these beaches?

Perhaps repetition and evasion are deemed to be effective responses by eThekwini, but why not come clean and be transparent?

Be that as it may, the municipality did (indirectly) confirm that it has a big problem and that one/or more of its senior officials may have stepped too far in claiming precipitously that it was safe to reopen city beaches on January 6.

We asked the municipality: “As requested more than two weeks ago, what is the name and position of the city official who took the decision to reopen the beaches on January 6 and again on January 13?”

eThekwini response: “No City Department works in silo. The decision was a joint one, with mainly the Parks, Recreation and Culture Department, Water and Sanitation and Disaster Management leading.”

Q: “What is the city’s response to suggestions that eThekwini has misled the public about the safety and quality of the sea and several beaches over this period?”

eThekwini response: “The wellbeing and safety of our residents has always been a priority. As a caring City that always puts its residents and visitors first, we commend our EWS and PRC officials who ensured that despite the negative impact it would have on our tourism, the beaches were closed immediately upon the first test results that showed high levels of E.coli to protect the public.

Q: “Is the city contemplating any disciplinary measures or other actions due to the apparent attempts to mislead the public about the quality of sea/water beaches by:

“a) denying there was a problem?”

eThekwini response: “The City has always been transparent and always acts on available information. We are not aware of anyone being misled.”

“b) claiming that the discolouration of seawater was due to water hyacinth and rain-influenced ‘groundwater flow’ from rivers?”

eThekwini response: “Discolouration due to water hyacinth is normal, especially after rains. The city acts on available information. As soon as the water test results were made available, we acted swiftly to ensure that the beaches were closed and that this was communicated widely.”

The city did, however, appear to acknowledge that a significant proportion of the recent pollution at Durban’s northern and central beaches was due to problems at the city’s Northern Wastewater Treatment Works.

“The dark water emanating from the ponds at the Northern Waste Water Treatment Works (NWWTW) is due to the excessive inflow of stormwater into the Works that flooded the ponds and put the settled sludge into suspension, discolouring the water. This water has to flow into the river. We are currently dosing the discharging water with sodium hypochlorite and we are using alum to settle the solids in the ponds. We are also advertising an emergency contract to dredge the settled sludge from the ponds. This water will not affect beaches, however, residents are urged to stay clear of it for their safety.”

We sent further follow-up questions to the city on Wednesday afternoon to clarify several issues, but no responses had been received late in the day.

The city’s full response to our questions can be read below: