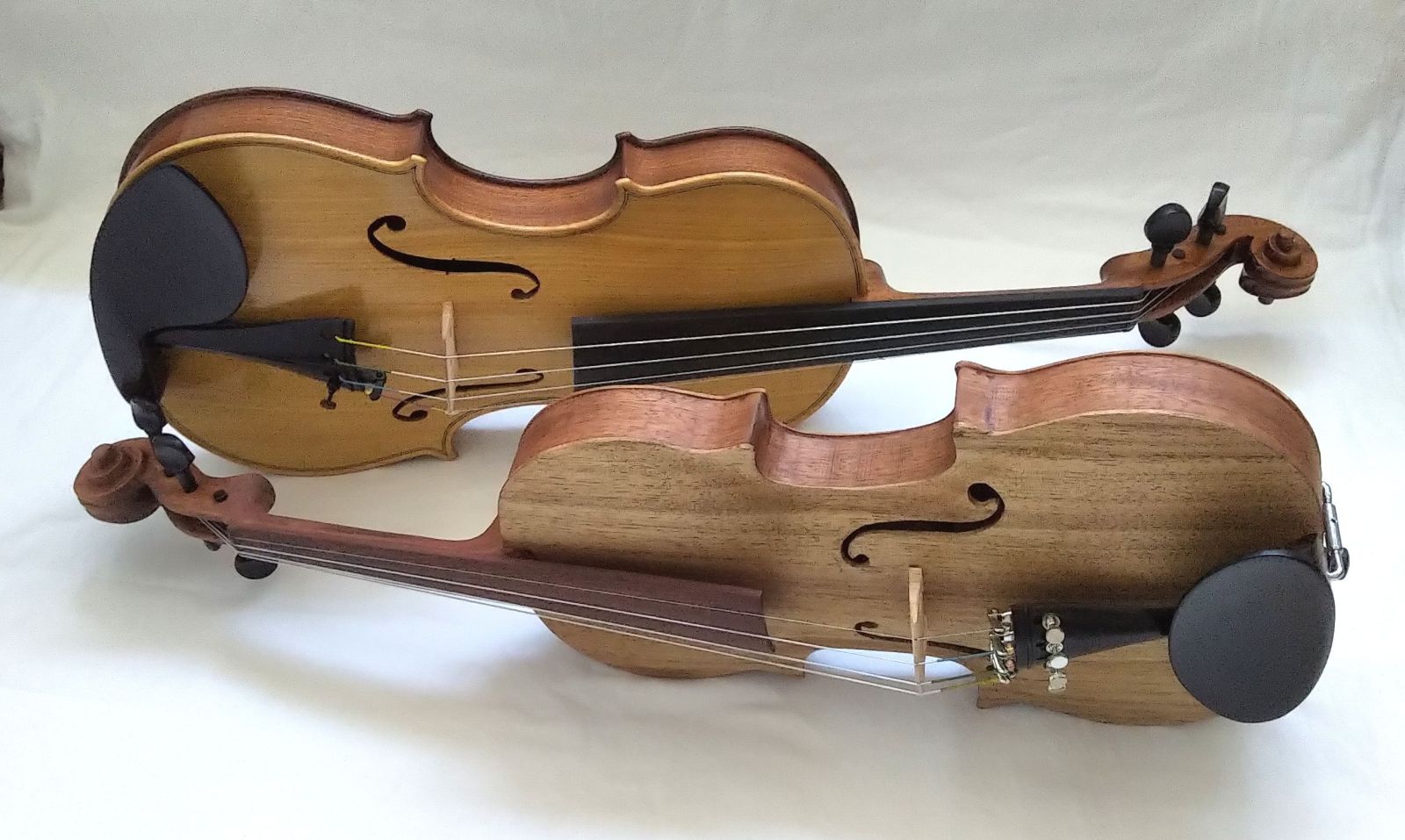 The two violins constructed by the researchers. Image: courtesy of Martina Meincken

Tonewoods are wood species that possess certain desirable properties that make them suitable for making musical instruments, such as woodwind or string instruments – like a flute or a violin. Any good tonewood should be radially cut, which means the lines formed by the year-rings are perfectly parallel on the surface. It must have an even-grain structure, be defect free and not shrink or swell noticeably with environmental changes.

The world’s violins are mostly made of spruce and maple tonewood, trees grown in the northern hemisphere. But what if indigenous African woods from the southern hemisphere were used to create an African violin? We set about testing the continent’s indigenous woods and found four wood species could not just work, but work well. Then we created two complete violins from them to test their sound.

What’s the right wood for a violin?

Soundboards are part of the body of the violin. They are made of woods that must resonate by amplifying the oscillation – the vibration – of string instruments. They should be lightweight but stiff enough to withstand the tension of the strings and must propagate sound well in the direction of the wood’s grain. If the wood’s density is not even throughout then the soundwaves could become scattered. This should make (sub)tropical wood species good candidates for soundboards because the lack of pronounced growth seasons results in wood with barely visible year rings and few density variations.

However, high-quality violins are made of the same wood species worldwide: spruce as the soundboard (top plate) and maple as the frameboard (back). While guitar makers seem to be more adventurous in using alternative wood species, violin makers tend to use only these traditional wood species. Good quality wood is typically from colder regions, like Canada or the European Alps, where the trees grow more slowly, which results in a uniform wood structure with fewer density fluctuations.

The soundboard on the front of the violin needs to transmit sound well, while the frameboard on the back should have a high, elastic modulus to give support to the soundboard, while still radiating sound well. Both parts should have a fairly low density to avoid unnecessary weight, which would make playing the instrument uncomfortable.

Based on all these requirements, our research team characterised several wood species from southern Africa to identify possible alternatives for violin making. We eventually decided that Yellowwood (Podocarpus latifolius) and Knysna Blackwood (Acacia melanoxylon – which is strictly speaking not indigenous, but has been established in the natural forests of the south western part of South Africa since the early 1900s) would be suitable as soundboards. Indigenous to West Africa, Sapele (Entandrophragma cylindricum) and Hardpear (Olinia ventosa) from South Africa were most suitable as frameboards.

Hannes Jacobs is a professional luthier from Pretoria, South Africa. A luthier is someone who builds string instruments. He agreed to make a full-sized violin from Yellowwood and Sapele. We wanted to ensure that the quality of the instrument would be comparable to good-quality commercial instruments.

The sound quality of the two violins was determined by recording audio frequency spectra – ranges – of various single notes to analyse the discernible overtones. This is a musical tone which is a part of the harmonic series above a fundamental note. A good sound quality generally consists of many harmonics at higher frequencies.

The African violin was played by various musicians on separate occasions, and all agreed that its sound is quite different from that of most other violins. The general assessment was that it has a very full, powerful sound with a strong lower register that projects well through the room.

The physical properties of the wood used for the African violin suggested that it may radiate sound less well in the high frequency range than spruce wood. Contrary to this expectation, the African violin shows larger resonance peaks at high frequencies than does the conventional violin. Resonance peaks are at the frequencies where the soundboard oscillates most and they compose the musical notes you hear. The more resonance frequencies are audible, the fuller the sound.

The results of our study show that African wood species are clearly suitable to be used as tonewoods in violins. They are able to produce an instrument with a beautiful, though slightly different sound.

The African violin has a significantly stronger sound in the lower frequencies that carries very well through the room. It also showed more harmonics with higher amplitudes in the high frequencies, which gives it a harsher sound than the conventional violin. Yellowwood and Sapele can be used to make string instruments with a sonorous, strong sound. DM/ML

Martina Meincken is an associate professor at Stellenbosch University.