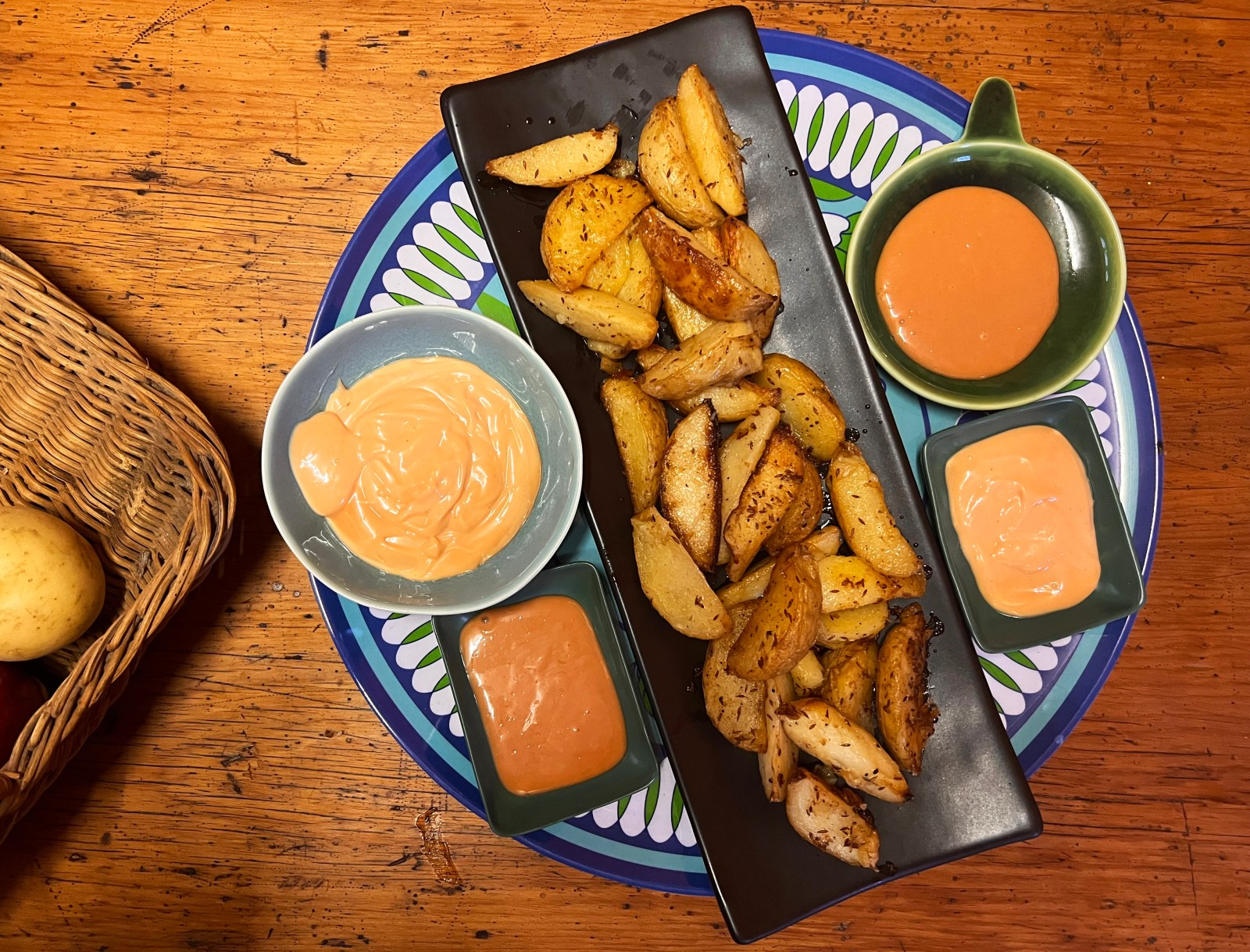 Good old potato wedges are always a crowd-pleaser, more so if you give them a lift by baking them in cumin butter and tarting up Kewpie mayonnaise by adding some Asian zing to it.

Toasting cumin seeds makes a great spice even more delicious. If you then melt some butter in the same pan and let it cook on the lowest possible heat for five to 10 minutes, the cumin infuses the butter to become ridiculously desirable.

Kewpie mayonnaise has a deliciousness that few other mayos possess, thanks to there being a whack of MSG in there. I’m no fan of MSG but I cannot deny that I adore Kewpie mayo, which can be adapted in any number of ways (buy it from the Asian shelves in your supermarket). Unlike many other mayos, Kewpie is made with egg yolks only, rather than whole eggs.

This week I simply stirred some char siu sauce and a little soy sauce into Kewpie. Char siu is a Cantonese barbecue baste, usually used on chops, chicken and the like. It’s one of the best sauces in the Asian flavour canon.

8 large potatoes, washed and cut into wedges but not peeled

Toast the cumin seeds in a dry pan until it just begins to smoke. Add the butter, let it melt, and cook at a very low heat for 5 to 10 minutes for the cumin flavour to infuse the butter. Then leave it off the heat for 10 minutes to infuse further.

Cut washed and dried large potatoes into wedges, leaving the skin on.

Season with salt and black pepper.

Bake until tender and crisp, which should take up to 90 minutes, or more, depending on the intensity of the heat. Give the pan a good shake every 20 minutes or so.

Halfway through the cooking time, sprinkle a little cold water all over the potatoes, by dipping your fingers into cold water and shaking it over them. This Greek method is used to give extra crispiness to phyllo pastry, and works for potato wedges too.

They’re done when they’re golden and soft in the centre.

Meanwhile, divide the Kewpie mayo into two bowls. Stir the soy and char siu sauce into both bowls, but add more of each to one than to the other. Some people will prefer the dip with the stronger flavour, some the other. DM/TGIFood

Tony Jackman is Galliova Food Writer of the Year 2021. His book, foodSTUFF, is available in the DM Shop. Buy it here.