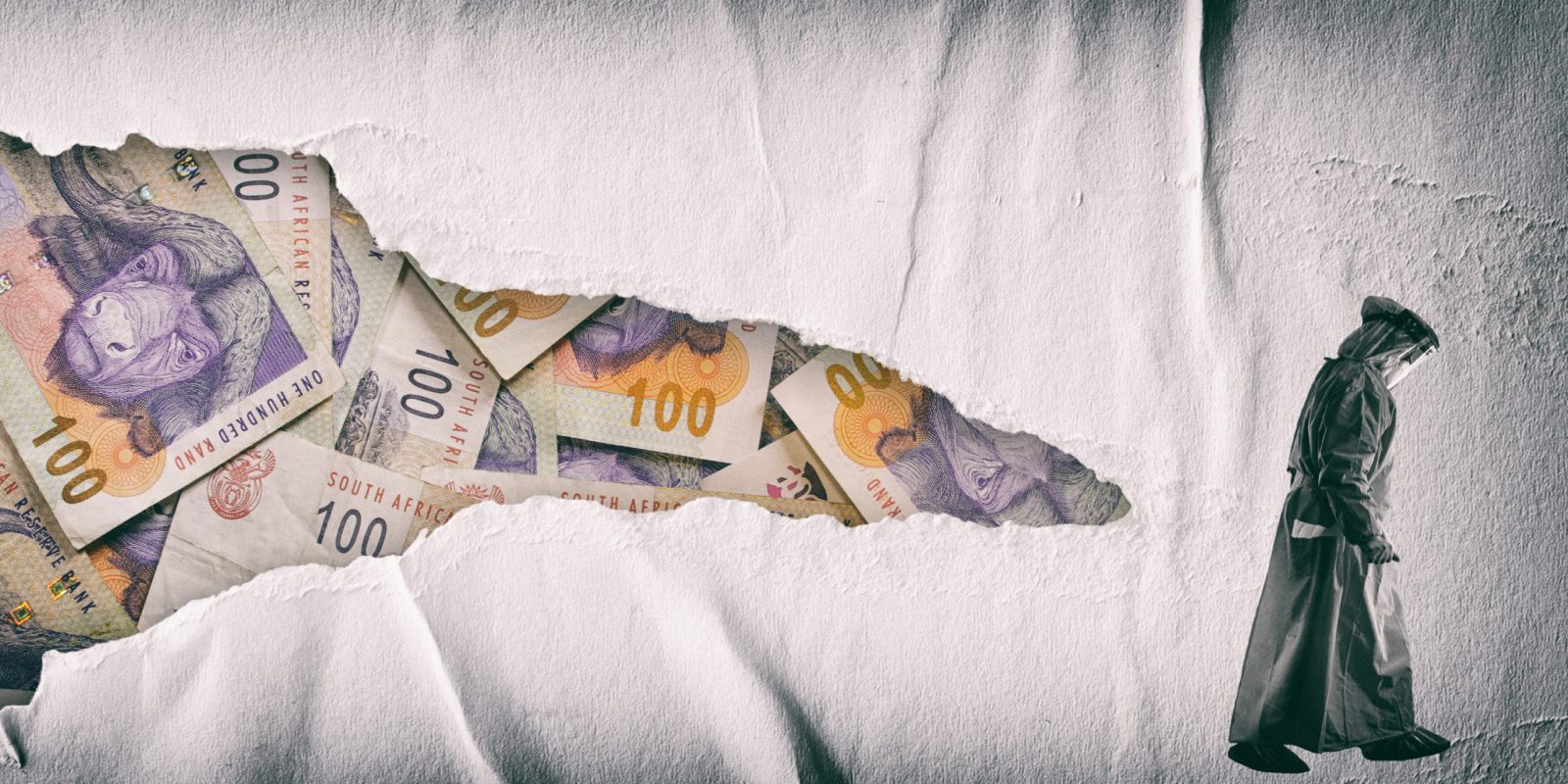 The first of the SIU’s six-weekly reports on Covid-19 PPE tenders that President Cyril Ramaphosa said he would receive, is due in the first week of September. (Illustrative image: Gallo Images | Sharon Seretlo) / Adobe Stock / Rawpixel)

While the Special Investigating Unit report does not include details of ongoing investigations into allegations received by the SIU after the timeline set for matters to be included in the final report, it has corroborated much of Daily Maverick’s previous investigations and reportage.

President Cyril Ramaphosa on Tuesday authorised the public release of the final report of the Special Investigating Unit (SIU) probe into the procurement — by all spheres of government — of goods, works and services associated with the Covid-19 pandemic.

In a statement accompanying the release of the report, the SIU said it had investigated 5,467 contracts awarded to 3,066 service providers with a total value of R14.3-billion.

Investigations into 4,549 contracts have been finalised, of which 2,803 were found to be irregular.

While the SIU report does not include details of ongoing investigations into allegations received by the SIU after the timeline set for matters to be included in the final report, it has corroborated much of Daily Maverick’s previous reportage and investigations.

Perhaps the most notable example is the case of Digital Vibes, the Department of Health (DoH) and ANC NEC member and former health minister Dr Zweli Mkhize. In a Daily Maverick webinar, Scorpio’s Pieter-Louis Myburgh explained that the Digital Vibes contract first came to his attention in 2020 when he was looking over government spending on Covid.

On this, the SIU report says “this matter has been fully investigated and the SIU issued its report to the Honourable President on 30 June 2021. The value of the contract under investigation and the SIU findings and outcomes have not been included in this final report”.

Just more than a year ago, it was announced that former presidential spokesperson Khusela Diko was to face an internal disciplinary process after concerns by the SIU over a lack of financial disclosures.

The concerns related to reports in the Sunday Independent which alleged that Diko’s late husband, amaBhaca Chief Thandisizwe Diko, had sought tender contracts through his company, Royal Bhaca Projects. These allegedly irregular contracts were related to the provision of personal protective equipment (PPE) for the Gauteng Department of Health.

Then Gauteng Health MEC Dr Bandile Masuku was fired in October 2020 for failing in his executive functions, according to Gauteng Premier David Makhura. The Gauteng DoH awarded contracts worth about R125-million to Royal Bhaca.

This most recent SIU report says “the allegations received stated that Royal Bhaca was irregularly awarded a contract to supply various PPE items due to its Director’s close proximity to the MEC of the Gauteng DoH, Dr Masuku. Royal Bhaca is not registered with SAHPRA and may not deal in medical devices.”

It said “the SIU investigation found that after Royal Bhaca became aware of the investigations to be conducted, and in anticipation of the media scandal that would in all likelihood follow, it decided to retract its business from the Gauteng DoH by firstly trying to cede the contract to another company indirectly controlled by or linked with Mr Madzikane II Thandisizwe Diko, who is the director of Royal Bhaca.

“When that failed,” the report continues, “Royal Bhaca asked the Gauteng DoH to change the award and contract into a purported ‘donation’, whereafter Mr Diko and the former CFO of the Gauteng DoH, Ms [Kabelo] Lehloenya, conspired to replace the orders placed with Royal Bhaca with orders from Ledla or another supplier.

“The SIU investigation found that both Royal Bhaca and Ledla were irregularly awarded contracts by the Gauteng DoH, which were based only on the arbitrary decisions of the former CFO of the Gauteng DoH, Ms Lehloenya, and without following any competitive bidding process.”

As a consequence, on 24 February 2021, the SIU referred to the NPA relevant evidence in support of a criminal charge of fraud against the directors of Ledla and Royal Bhaca.

“The SIU was informed by the NPA that the evidence was received and a prosecutor is appointed to attend to the matter,” reads the report.

Staying in the Gauteng province, a Maverick Citizen investigation found that between June and August 2020, the Gauteng Department of Education (GDE) spent more than R431-million on sanitising schools. This money was paid in sundry payments to hundreds of companies, many of which appear to have no expertise or prior involvement in the cleaning industry.

Of this, the SIU report says “… the SIU found that the 270 service providers were appointed on a deviation from regular procurement processes.

“The SIU found that the deviation in itself was not irregular. However, the deviation memorandum sets out that all service providers should be appointed in line with NT regulations and guidelines; should be accredited to deliver the specialised services required; and should be registered on the CSD.”

“In doing so, the officials involved contravened Section 217(1) of the Constitution as the procurement processes were not fair, equitable, transparent, competitive and cost-effective.”

In this case, the SIU made four referrals for disciplinary action and one criminal referral for corruption.

What started as a boastful post on social media by high-flying businessperson Hamilton Ndlovu ended badly in September when the SIU and the National Health Laboratory Service (NHLS) were granted an order to freeze Ndlovu’s properties and a trust account worth R42-million.

Daily Maverick reported at the time that the SIU was investigating corruption allegations involving eight companies linked to Ndlovu.

The bucks stop here: Businessman Hamilton Ndlovu to have properties and funds seized over PPE contracts

Tuesday’s SIU report says their investigation “uncovered a web of interlinked entities, all purporting to operate independently. However, in essence, the entities were all the alter egos of Mr Ndlovu.

“The SIU investigation determined that the entities which conducted business with the National HLS for PPE (and which is listed above) upon receipt of the National HLS funds, transferred same to Mr Ndlovu and entities linked to him.”

It continues that “the SIU determined that Mr Hamilton Ndlovu is indirectly linked to various other entities and the entities were all awarded contracts by the National HLS through irregular procurement processes.

“The SIU obtained evidence which revealed that Mr Ndlovu was the individual behind the submission of quotations by the different entities, the purchase of the required PPE and to some extent the delivery. The available evidence indicates that he is the owner of the entities and is both the direct and indirect beneficiary of the funds received from National HLS.”

The case of the Johannesburg Property Company (JPC) is another tale of alleged crass opportunism and financial misconduct covered by Daily Maverick.

The JPC, which manages the City of Johannesburg’s property portfolio of 64,000 properties, found itself on the wrong side of the law when the city’s executive adjudication committee decided on 16 March 2020 that the city and its entities needed to respond to the pandemic.

The JPC then decided to contract service providers for deep cleaning and sanitation at the city’s Metro centre, taxi ranks and markets. According to a report, the emergency procurement process was flawed and it appeared that the four service providers were handpicked by JPC officials.

The SIU report says “… the appointment of service providers for deep cleaning and sanitisation services during Covid-19 lockdown, for the period April to July 2020, by JPC, was found to be irregular and invalid…”

In this regard, disciplinary and criminal referrals were made against five employees.

The SIU has also instructed the office of the State Attorney to brief counsel to lodge an application to review and set aside the four contracts concluded by JPC that were valued at R18.6-million.

Noting the release of the report, a statement by President Ramaphosa said that “the submission of the final report is an important step in our fight against corruption in the public and private sectors, and against maladministration”.

“This investigation targeted individuals and institutions who believed they could exploit a moment of national vulnerability to enrich themselves and those with whom they colluded to abuse public resources.

“It is unacceptable that so many contracts associated with saving lives and protecting livelihoods were irregular, unlawful or fraudulent.

“This investigation demonstrates our determination to root out corruption and to deal with perpetrators,” he said.

The SIU expects to submit a supplementary report to Ramaphosa at the end of June 2022. DM