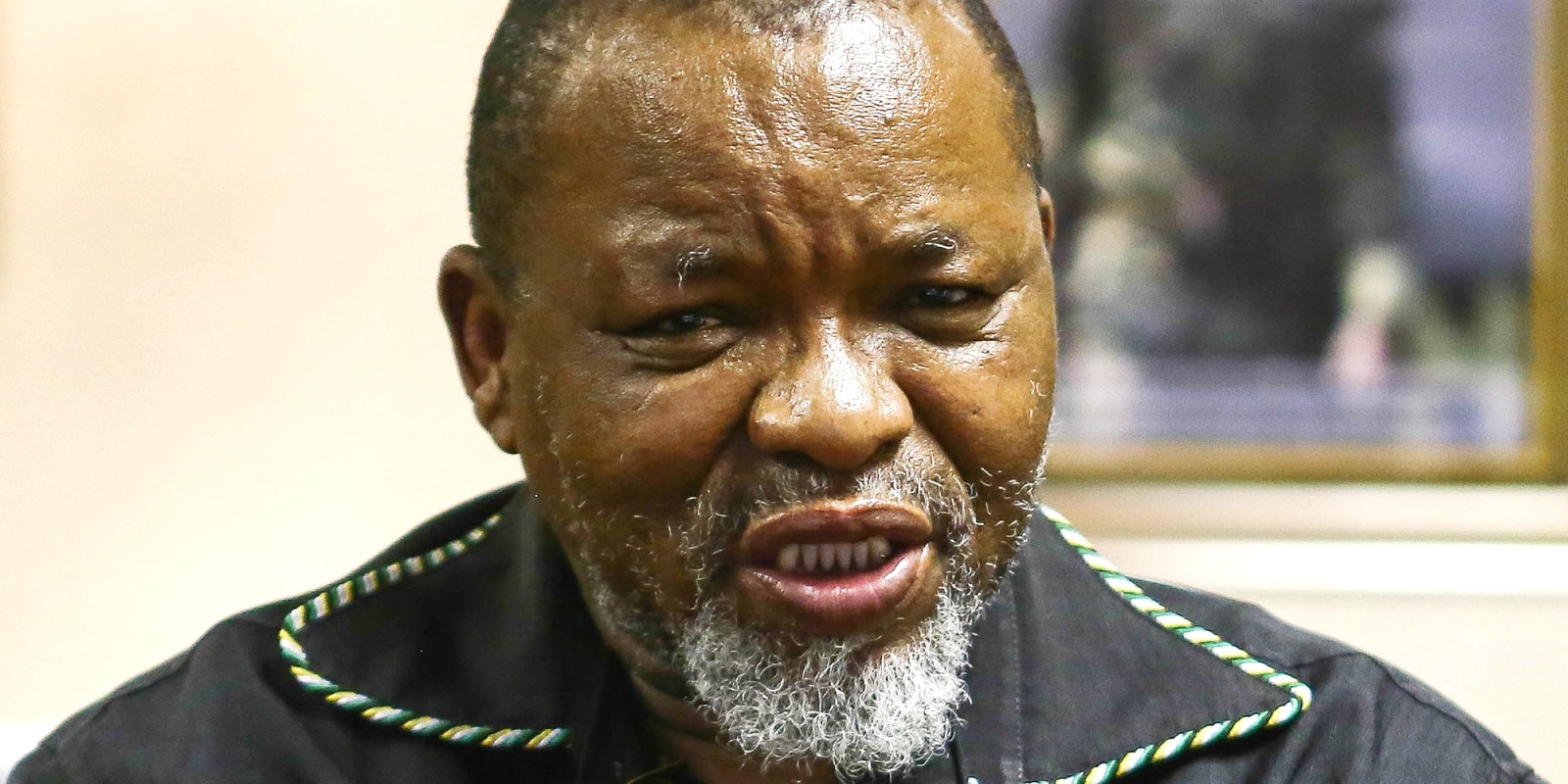 In a recent interview, Mineral Resources Minister Gwede Mantashe made bizarre claims about an international NGO, University of Cape Town research units, civil society and the media working together to ‘destabilise’ his department. Huh?

In an interview with City Press published on 23 January, Mineral Resources Minister Gwede Mantashe claimed he was a politician under attack.

The forces acting against him are not ANC factions, as one might expect — but entities running an alleged anti-Mantashe conspiracy within academia and activism, aided by the “predominantly white liberal media”.

If you’re confused, so was everyone Daily Maverick spoke to about this article. Attempts to seek clarity from Mantashe himself did not meet with success.

The most baffling claims made by Mantashe in the interview were as follows:

The minister said his department was monitoring funds from the Children’s Investment Fund Foundation in the UK, “which is channelled to an institution based in the University of Cape Town [UCT], which funds a number of projects including aspects of the Council for Scientific and Industrial Research [CSIR] and other civil society groups to destabilise the work of the department”.

“But because we are aware, we can confront it. The money is from the UK, goes through UCT — through an institution I will not name — which channels the money to the CSIR and civil society [organisations]. The fact that we are aware makes us able to actually deal with the reality that we are confronted with.”

He said the department was in possession of a detailed report from the CSIR, “which we got hold of and that outlines those details”.

“Don’t ask me how we got hold of that report,” he said.

Phew. Let’s start at the top.

The Children’s Investment Fund Foundation (CIFF) terms itself as the world’s largest child-focused philanthropic organisation, and it has a global footprint. When Daily Maverick contacted its London headquarters this week to ask if the CIFF was aware it was at the centre of allegations by the South African mineral resources minister, a CIFF spokesperson declined to comment.

CIFF’s website, however, provided a few more clues as to what Mantashe might be on about. Between July 2018 and December 2020, CIFF gave a grant of $675,000 (just more than R10.3-million) to “support reforms and climate-linked financing to facilitate the just energy transition” in South Africa.

CIFF’s partners in this project are listed as the University of Cape Town (UCT) and Meridian Economics, which describes itself as “a specialised economics advisory group and think tank providing executive-level decision support, strategic advice and analytics capabilities”.

This think tank appears to do what think tanks tend to do, namely, produce papers analysing public policy and making recommendations, with a focus on energy and infrastructure. It is not connected to UCT.

Mantashe then claims that the CIFF gives money to “an institution based in the University of Cape Town”, which then funnels the money to other projects to “destabilise” his department’s work.

A spokesperson for UCT, Nombuso Shabalala, told Daily Maverick that the university “will be engaging with Mr Mantashe to understand if he was quoted correctly in the news article and the nature of the allegations, in order that we can investigate fully as the allegations are serious”.

UCT rejects the insinuation that it “funnels money to agencies that undermine the minister’s office” as “false”.

The spokesperson said: “All funding received by UCT is very closely governed and scrutinised. Ethical behaviour is expected from all who receive and use funding for academic work.”

Mantashe further claimed that a key player in this alleged conspiracy was the CSIR and that a leaked report from the CSIR laid out “those details”.

CSIR spokesperson Tendani Tsedu was quoted by City Press as saying that the organisation was unaware of the issues raised.

Tsedu also said: “As the CSIR, we have a good relationship with the Department of Mineral Resources and Energy.”

With all the bodies listed by Mantashe as part of this sinister plan being either baffled, silent, or baffled into silence, Daily Maverick embarked on its own journey of speculation.

The group also submitted research to the National Energy Regulator of South Africa (Nersa) in February 2021 which suggested that new nuclear power would “cost the fiscus more, produce fewer jobs and take longer to meet South Africa’s energy needs than other energy options”. This was in response to Eskom’s proposed procurement of 2,500MW of new nuclear capacity.

The persecutory claims made by Mantashe should thus be seen in the context of the minister’s increasingly lonely crusade to beef up South Africa’s reliance on coal — in marked contrast to most countries that claim to be taking climate change seriously — and further expand its nuclear capacity.

Throughout his tenure as minister, Mantashe has had a fractious relationship with researchers and environmental groups, whose court challenges have on several occasions successfully thwarted his plans.

In late 2021 he accused environmentalists of turning the people of the Eastern Cape against Shell’s planned seismic survey off the Wild Coast, saying: “They mobilise you to say you don’t want all of that [the Shell survey] because you love your butterflies, you love your mountains and your grass, so this must stop.”

The fact that some of the work on South African energy being done by local research groups and academic units is foreign-funded is no secret.

Most of South Africa’s major public universities, as well as universities across the African continent, receive much-needed funding from international philanthropic bodies: UCT receives money from the Bill & Melinda Gates Foundation, for instance, and the University of KwaZulu-Natal from the Rockefeller Foundation.

In fact, the Department of International Relations and Cooperation’s (Dirco’s) Ghaleeb Jeppie explicitly encouraged universities to go to global NGOs for funding in 2019 because there was less direct aid available from foreign governments.

“There is a need to tap into extra-budgetary resources from the private sector, philanthropic entities, international organisations and global funds,” Jeppie said.

The funding crisis in SA universities has since been exacerbated by Covid-19, with the Higher Education Department’s Blade Nzimande telling Parliament in August 2020 that the financial impact of the pandemic on university expenditure was at that point more than R3.8-billion.

Sadly, Mantashe is by no means the first embattled ANC politician to reference a dubious “report” as offering evidence of plotting against him.

Neither is he the first to make baseless claims against local universities.

In April 2019, the then Dirco minister, Lindiwe Sisulu, claimed in a public lecture given at the University of KwaZulu-Natal that the University of the Witwatersrand was “heavily funded by the Israeli government”. She gave no information as to the source of this claim, which erstwhile Wits vice-chancellor Adam Habib described as “absolute nonsense”.

Habib added that Sisulu was “in violation of her oath as a minister for knowingly misrepresenting the state of affairs at a public university”. DM