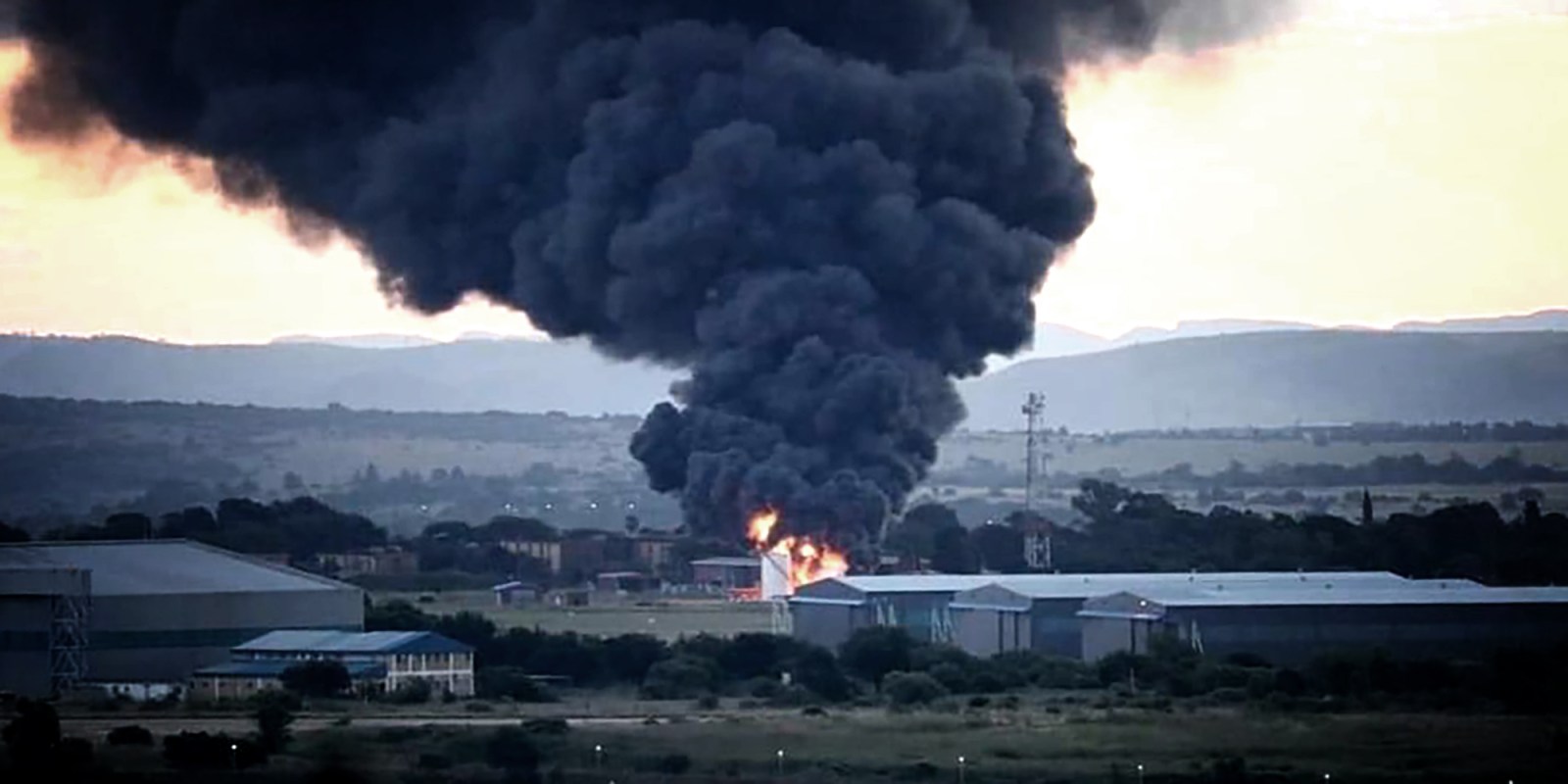 Smoke rises from the blaze at the Waterkloof Air Force Base in Tshwane on Sunday evening. (Twitter / @Abramjee)

The South African National Defence Force is investigating the cause of a fire at Tshwane’s Waterkloof Air Force Base fuel depot. It was contained within an hour — no one was harmed.

The South African National Defence Force (SANDF) is investigating the cause of a blaze at the Waterkloof Air Force Base in Tshwane that caused huge plumes of smoke. The fire broke out at the fuel depot at about 7pm on Sunday.

Spokesperson Brigadier-General Andries Mahapa told eNCA that firefighters based at Waterkloof put out the fire within an hour. He said no one was harmed.

“Everything is under control. There’s no reason to be concerned or worried about anything,” Mahapa told the broadcaster while speaking from the scene.

Another SANDF spokesperson, Brigadier Mongwezi Kweta, told News24: “I can confirm that it started at the bulk fuel tanks where we store fuel. There is no clarity how the fire started and there is no indication on whether it came from underground or on the surface. Investigations continue to establish further details.”

Waterkloof Air Force Base, which is not a National Key Point but falls under the Defence Act and associated regulations, is well known since a plane of guests landed there for a Gupta family wedding in 2013.

Mahapa said there was no damage at the base outside of the fuel depot. He said six or seven fire trucks were on the scene to extinguish the blaze.

In a statement, Mahapa said the fire “was contained within the hour after it broke out by the South African Air Force firefighting teams from both Air Force Base Waterkloof and Air Force Base Swartkops in Valhalla, Pretoria”.

“The cause of the fire, the magnitude of the damage and the cost of the damage to the Bulk Fuel Depot will form part of an investigation that will interrogate all events and or incidents that might have led to the fire breakout at the Base. No structural damage was reported.”

Commentators on social media were quick to link the Waterkloof fire with the recent blaze at Parliament in Cape Town and others, such as the fire at Charlotte Maxeke Academic Hospital and the Bank of Lisbon building in Johannesburg. Such fires have been linked to the government’s failure to adhere to fire prevention, and health and safety standards.

After reports of the fire at Waterkloof, ActionSA leader Herman Mashaba tweeted, “What on earth is happening to our country President @CyrilRamaphosa? Is this another inexplainable fire? Are we going to have another mentality derailed person to be responsible? Please save our beloved country.”

Fires such as those at Charlotte Maxeke and the Bank of Lisbon raised questions about whether the government is so inept it can’t protect its own property from, very likely, naturally occurring threats. The fire at Parliament raised similar queries with the added question: why can’t the state protect itself from supposedly deliberate threats?

Until there’s further information, it’s unclear what puzzles the fire at Waterkloof will provide. DM