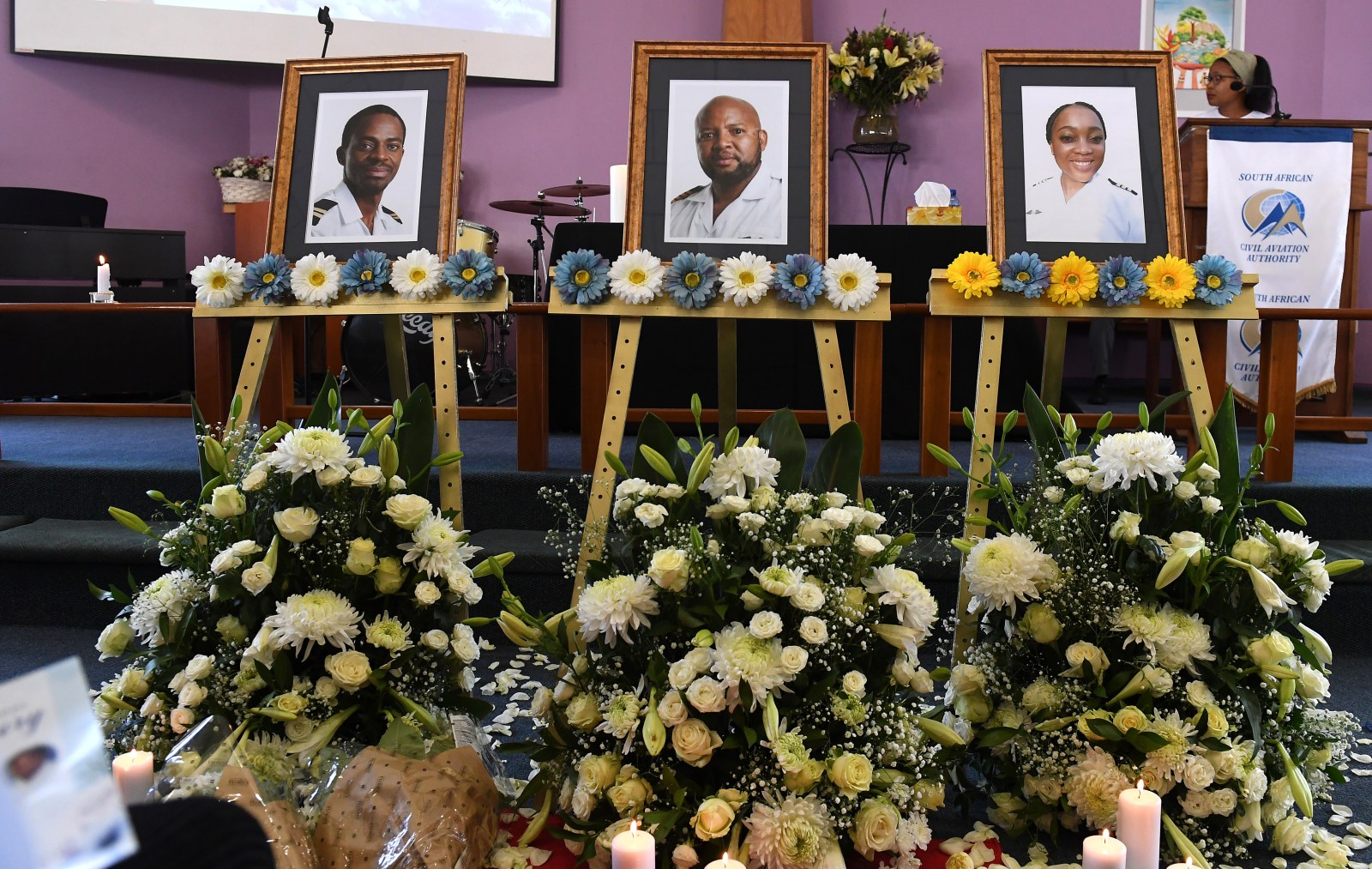 The report on a plane crash that claimed three lives two years ago raises additional questions, and relatives of those who died in the crash are contemplating civil action against the SA Civil Aviation Authority.

The SA Civil Aviation Authority (SACAA) contravened a slew of its own aviation regulations before the crash of its Cessna calibration aircraft in January 2020, a report into the crash has found.

The final report by the Aircraft Accident Investigation Bureau (AIIB) was published on the SACAA’s website on Sunday night. Transport Minister Fikile Mbalula on Sunday met with the next-of-kin of the three crew members who died to discuss the findings of the report with them.

The captain, Thabiso Tolo, first officer Tebogo Lekalakala and flight inspector Gugu Comfort Mnguni were on board when the plane crashed into the Outeniqua Mountains near George. Lekalakala had a four-year-old daughter at the time of her death.

The most serious of the findings against the authority was that the aircraft was not maintained in accordance with the requirements of annual inspections. The certificate of airworthiness was thus rendered invalid.

One of the aircraft’s engines was replaced, a procedure that requires a full inspection by the SACAA’s flight inspection unit. However, the inspection did not take place.

The SACAA has grounded aircraft from South African Airways and other airline operators for similar contraventions.

The aircraft took off from the airport at George in inclement weather and low clouds on 23 January 2020 with Tolo, Lekalakala and Mnguni on board to perform a calibration flight.

The aircraft banked, rolled and pitched up and down before crashing into a peak of the Outeniqua mountains at high speed.

In aviation terms, the aircraft had an “abnormal attitude”. However, because the flight data recorder had not been downloaded for more than a year, and there was no cockpit voice recorder, very little could be deduced about the abnormal flying attitude.

The AIIB found that Tolo was issued his annual pilot proficiency certification in 2019, but there was no record that he actually completed his flight simulation training. The simulation check would have included the topic of how to recover an aircraft with an abnormal attitude.

The SACAA failed to check whether his proficiency as pilot in command was in compliance with the SACAA’s regulations.

For unknown reasons, the crew did not transmit any Mayday calls to the control tower at George airport before the crash.

The AIIB found that for whatever reason, the crew drastically lost control in a very short space of time during what was an ordinary calibration flight performed above cloud cover. The loss of control caused the aircraft to lose altitude and before the crew could recover it, the aircraft flew into the mountain.

With the limited flight data that was extracted, it is unknown why two pilots could not get the aircraft under control.

The Department of Transport received the report in November last year, but Mbalula’s office did not respond to inquiries on why the report was released only on Sunday, exactly two years after the crash.

His office also did not comment on allegations in the aviation industry that the department put pressure on the AIIB to omit the damning findings against the SACAA and its CEO/director of civil aviation, Poppy Khoza.

Trevor Abrahams, a predecessor of Khoza, said the report leaves the industry without a clear picture of why the crash occurred.

“There is little dispute that the aircraft entered unusual attitudes in the course of a routine calibration manoeuvre, which should not have entailed any such scenarios. The accident investigators were unable to give much insight as to why this occurred and claims of disorientation in both experienced crew in this phase of the flight are mere speculation and conjecture, while not considering other possible scenarios which could have given rise to such developments.

“Permitting the calibration aircraft to operate without all the mandatory parameters on the flight data recorder has in fact robbed the aviation industry of what happened in the moments just before the accident, and hence a more informed view of what can be done to avoid such a recurrence.”

“There are many possibilities of what else could have caused the accident, [such as the aircraft malfunctioning], but none of those were considered,” said Martinus.

The provisional findings by the SACAA’s accident incident investigation unit released last year allegedly also contributed to the executive of the division, Peter Mashaba’s contract not being renewed. Mashaba made similar scathing findings about the SACAA’s operations to the ones that appeared in the AIIB’s final report.

The SACAA denied that Mashaba was fired because of the report and obtained a court order preventing Mashaba from speaking out.

Mashaba’s case before the Commission for Conciliation, Mediation and Arbitration is scheduled for arbitration on 4 February.

Mashaba said he had warned the SACAA shortly before the accident that the aircraft’s status needed to be checked before a disaster occurred — but his warning went unheeded.

Sputla Lekalakala, the widower of the deceased first officer, and a qualified aircraft maintenance engineer and quality manager, was instrumental in the decision by the Ministry of Transport to transfer the investigation of the crash to an independent investigator rather than having the SACAA investigating itself.

“The report brings scant closure, because the words ‘contradict’ and ‘contravention’ are scattered all over the report. I told Mbalula that it amounts to gross negligence and those responsible should be held accountable.

“I will see to it that criminal charges are laid against the responsible people. I have been engaging with my legal team about a civil claim against the SACAA.”

Mbalula’s office said he will release a statement about the findings on Tuesday. DM