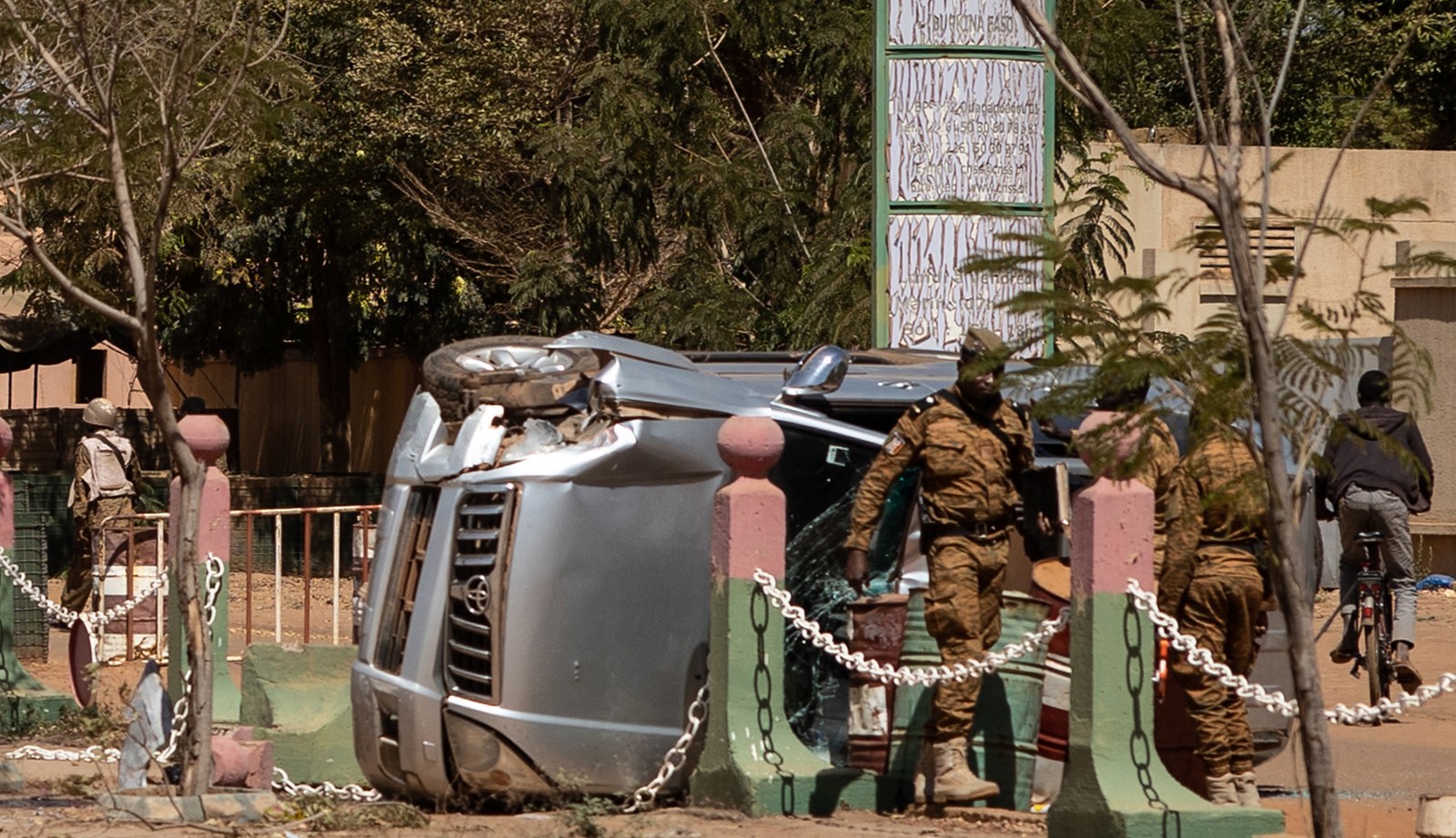 Burkina Faso soldiers stand by a damaged vehicle in front of the Guillaume Ouedraogo military camp in Ouagadougou on 24 January 2022. Mutinous troops in Burkina Faso arrested and detained President Roch Kabore and his ministers, demanding more resources for the battle against Islamist insurgents, security sources told AFP. The arrests came a day after soldiers at several barracks across the volatile West African country staged an uprising over the government’s handling of the jihadist threat. (Photo: Olympia de Maismont / AFP)

Soldiers in Burkina Faso appear to have toppled the elected government.

Soldiers detained Kabore in a military camp on Monday morning after heavy gunfire around his residence on Sunday night in the capital Ouagadougou, according to several news reports.

It was not clear if Kabore was safe. Mutinous soldiers said on Monday afternoon that they intended to make a public announcement on national TV shortly, indicating they had executed a coup and seized power.

Military coups, once highly prevalent in Africa, though more recently much less common as democracy took hold, are making a comeback, especially in West Africa and the Sahel.

Over the past two years, the military has seized power in Mali, Guinea and Chad and now it seems, Burkina Faso. This has been partly the result of an inability by elected civilian governments to deal with the growing threat from Islamist insurgents, Fahiraman Koné, a senior researcher at the Institute for Security Studies in Bamako, Mali, told Daily Maverick.

He said the military’s move against Kabore came as no surprise — anger both in the military and society had been rising against his government for its failure to curb the Islamists. Koné cited the insurgent attack on a gendarmerie post in Inata in the country’s northern Soum region in November, when he said 53 military police officers had been killed. Other reports said some civilians also died in the attack. According to local reports, the military police had not been resupplied and had run out of food weeks before the attack.

Civilian anger against the government had also been rising over its perceived mismanagement of the insurgency, Koné said. In June last year, at least 160 civilians, including volunteer anti-terrorist fighters, were killed in attacks around Solhan in the north of the country, near the borders with Mali and Niger. These were the deadliest Islamist attacks since the insurgency reached Burkina Faso in 2015.

In August, another insurgent attack near the border with Mali reportedly left more than 120 people dead, at least 65 civilians and 58 jihadists, according to a government statement.

Koné said jihadists continued to kill civilians daily. The inability of the government to halt the killing had led to growing public demonstrations calling on Kabore to resign. The social anger had been aggravated by the impact of the Covid-19 pandemic.

Koné said these factors fuelled existing tensions between Kabore and the military. Since he had been elected to office in 2015 — in the wake of mass popular protests which forced longtime leader Blaise Compaore to stand down — Kabore had tried to sideline an army that had played a key role in Burkina Faso’s politics since independence.

The army believed it was not being given the necessary material support to fight the jihadists and this was compounded by government mismanagement of the insurgency.

Similar tensions between the government and military over the handling of the insurgency have sparked military coups in neighbouring Mali, where a military junta remains in power, resisting efforts by neighbouring governments to pressure it into holding elections.

Koné said the inability of West African and Sahel governments to combat the jihadist insurgency spreading across the region was one of the main reasons coups were returning. But other factors were at play, including the manipulation by elected leaders of their countries’ constitutions to remain in power beyond their original term limits. This contributed to the toppling of Guinea’s President Alpha Condé by a military junta last year.

Koné noted that the Economic Community of West African States (Ecowas), which represents the governments of the region, had imposed political and economic sanctions on the Mali junta two weeks ago because it had reneged on its agreement to hold democratic elections by February this year. Instead, it was now proposing a five-year transition to democracy.

Koné said Ecowas and other regional bodies would continue to lack popular credibility in its efforts to discourage coups as long as they failed to intervene when elected leaders manipulated constitutions to cling to power.

Apart from Condé, in 2020, after 10 years in power, Alassane Ouattara, President of Ivory Coast, had the constitution changed to remove the limitation on presidents to two terms in office. He ran again in the elections that year and won a third term of five years. DM